Regardless of the periodic contrasting suggestion from the filmmaking community, there are more similarities than differences between poetry and film. Both art forms engage aesthetic and rhythmic qualities of form in their implementation; the poem uses the metre and sound symbolism, whereas film uses both visual and sound-based association in their favor.

When the emotions surrounding life and its choices, the pathos, the happiness, and the complex grey emotions in between find solace in the comfort of a medium, art reaches its highest peak.

Poetry, or in that case, any type of literature, gives the reader ample freedom and space to construct their own imagery based on the subtle suggestions weaved by the author. The color of leaves in autumn could have been described most expressibly in the poem, but the final rendering is always the task of the reader. In film, the hues and the color temperature are decided by the filmmaker, and the only task of the spectator is to touch this ethereal depth by finding a meaningful comparison in their own inscape. Naturally, it is an event of an explosion when these two extremely delicate media meet at a crossroads.

There is probably no better contender to be revived with the exquisite touch of poetic aesthetic than the genre of horror films, which is always accused of having unnecessary jump cuts and extreme gore. Poetic horrors showed us that the veiled joy and merriment can be a point of caution; likewise, the severe cruelty and violence can be the utmost poetic and psychological need of a pervert and/or disturbed humankind.

When made carefully, the viewer can indulge in the chilling labyrinthine landscape in the mist, or get unsettled by the imbibed brutality hidden in nature. Without further ado, here are 10 great poetic horror films that are worth your time.

Love has witnessed many rebel warriors in his lifespan, but there are no internal fights to win except the external ones. The problem arises when love can’t embrace its preferred earthling despite all its effort, because of the practical conflicts arising from two contrasting nature and priorities. The heart becomes stone cold, just like the snowy landscape of the “Let the Right One In,” where the vampire protagonist feeling for his human lover finds a meaningful association.

The vampire girl Eli is trapped in her age of 12, the same age as Oskar, her next door neighbor. But Oskar is human, and Eli survives in bloodlust, and she knows that her affection shouldn’t be known and reciprocated by Oskar for his own good. Oskar wants to befriend Eli, but with stone cold sorrow, Eli is forced to refuse. Oskar is also bullied in school, and after he finds the true nature of Eli, the dramatic tension amplifies in a heightened climax.

Cinematographer Hoyte Van Hoytema mixed the red of blood with the white of the snow with the proficiency of a painter and created an eerie yet romantic atmospheric feel in it. This great visual horror is a rare addition in the canon of omnipresent childish vampire romance films.

After some time, the bodies of the soldiers start to pile up and the cosmic imagery suggests the presence of a dark force. A ghost detective is called and upon discovering the truth, he becomes indecisive and disturbed, just like the audience. The film has a significant departure in the portrayal of samurai characters, who are often highlighted as compassionate and brave warriors.

It is based upon a Japanese supernatural folktale from the times of the Heian period. The atmosphere is unnerving and beautiful at the time and provokes the viewer to embrace it, just like the supernatural seductress. In “Kuroneko,” Kaneto Shindo made a film in which every single shot, perfectly lit with appropriate contrast, can be framed in a gallery. 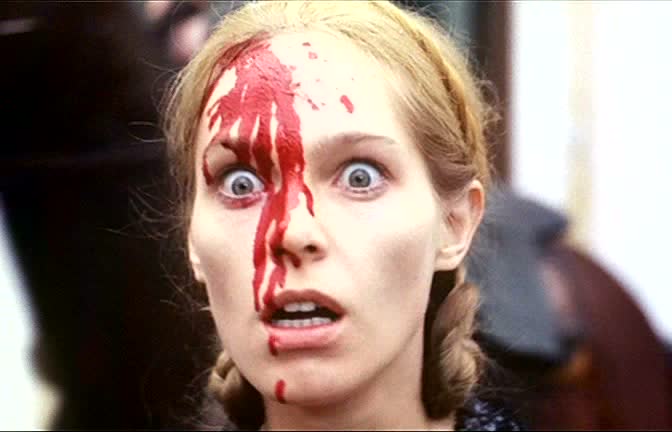 There is no need to clarify who Andrzej Zulawski is to horror and cult film fans. Immortalized by his cult favorite “Possession,” Zulawski showed promise even in his earlier obscure films. His debut film “The Third Part of the Night” contains his recurring theme of the personal breakdown in it.

During World War II, German soldiers slaughter Michal’s wife, son, and mother. Michal and his father avoid death by remaining in the forest. He joins the resistance but the Gestapo tries to kill him. In the escape, he gets into an apartment of a pregnant woman, who is a doppelganger of his wife, and helps her with childbirth.

It is an avant-garde approach to showing the Nazi terror in Poland, and this nightmarish and allegorical plot gives him great space to play and experiment with visuals. The camera is never steady with the character and manipulated to give a distorted floating effect on the atmosphere. This hallucinatory movie will make the audience wonder in its beauty and scratch their heads in confusion at the same time. It is an applaudable first effort.

“Dark Water” has no special snowflake in its plot. Based upon a short story “Floating Water” by the author of the “Ring” trilogy, it has the general tropes of  J-horror films: a child moving with the parent, befriending an invisible guest, and the ultimate reconciling of mother and daughter.

The difference is made by the decent execution by the filmmaker with appropriate sound and visual cues. It is not a film stuffed with blood and gore, but one that grows its characters slowly with time.

The film is also extremely moody and rather than cheap scares, it builds an extremely unsettling atmosphere to the spectacle. It is a J-horror remake, but one of the good ones, despite being largely underrated by the critic community, and Jennifer Connelly performed a convincing representation.

The cruelest surprise awaits a person when their loved spouse starts behaving differently without any prior indication. Women are a tough puzzle to decipher, and they are intelligent enough to discover this weakness in most males that they can’t stand awkward pauses.

Nothing can be done though when this behavioral change is not a decisive one, but a result of supernatural control. An ‘invasion of the body snatcher film,’ made with a slow-building sinister pace, the relatively recent “Honeymoon” is an underrated gem.

This clever film amplifies the tension synchronized with the heightened climax, and scare and meddle with the minds of the audience. There is also a subtle allegory about marriage and child, suitably in a film that plots its protagonists on their honeymoon in a deserted cabin.