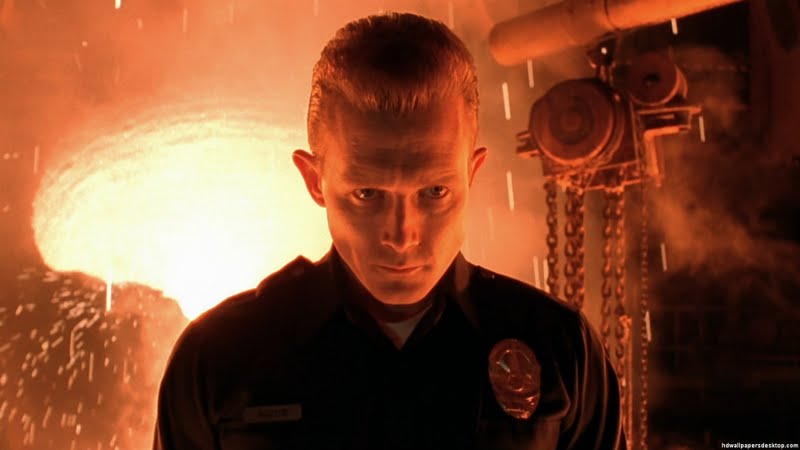 At one point during the hellish climax of “Terminator 2: Judgment Day” (1991)—James Cameron’s fire-and-brimstone sci-fi classic, which has been re-released in 3D—all hope seems lost. The film’s undulating villain, a shape-shifting robot known as the T-1000 (Robert Patrick), is face to face with his target, John Connor (Edward Furlong), in a steel mill, and since John is a 10-year-old and the T-1000 can turn his hands into weapons with no more than a thought, it’s a battle that promises to be monumentally one-sided.

Until, that is, John’s mother Sarah (Linda Hamilton) shows up. Wounded and baring her teeth in anger and pain, she doesn’t look ready for a fight, yet she enters the fray anyway, firing bullet after bullet at the T-1000. It doesn’t matter that this monster seems invincible; he’s not getting near her son.

No moment in “Terminator 2” transfixes quite like that searing clash between mother and machine. The early “Terminator” films may self-consciously dabble in various chambers of philosophical thought (patriarchy versus matriarchy! Fate versus free will!), but their appeal has always been the potency of their suave, brutal fight scenes and feverish emotional outbursts (“Fuck you!” Sarah tells the T-1000 after he stabs her).

The first film in the series, “The Terminator” (1984), loyally adhered to that principle, presenting a pleasantly bare-bones tale of Sarah attempting to outrun Arnold Schwarzenegger’s sunglasses-loving killer cyborg. Yet for all its pleasures, “The Terminator” pales next to its sequel, which chronicles a grander showdown between human frailty and artificial perfection—and welds together a powerful portrait of Sarah as she rises from the ashes of torture and imprisonment to become the last woman standing between humanity and an A.I. revolt (one that has probably given iPhones some nasty ideas).

The emotional core of this saga is Hamilton’s ferocious performance (her Sarah and Sigourney Weaver’s Ripley are arguably the mothers of Charlize Theron’s Furiosa). But it’s also because of the following six reasons, which not only explain why “Terminator 2” is superior to its predecessor, but why it’s one of the gutsiest, most exhilarating, and most moving sequels of all time.

1. It has a more complex story than the first one 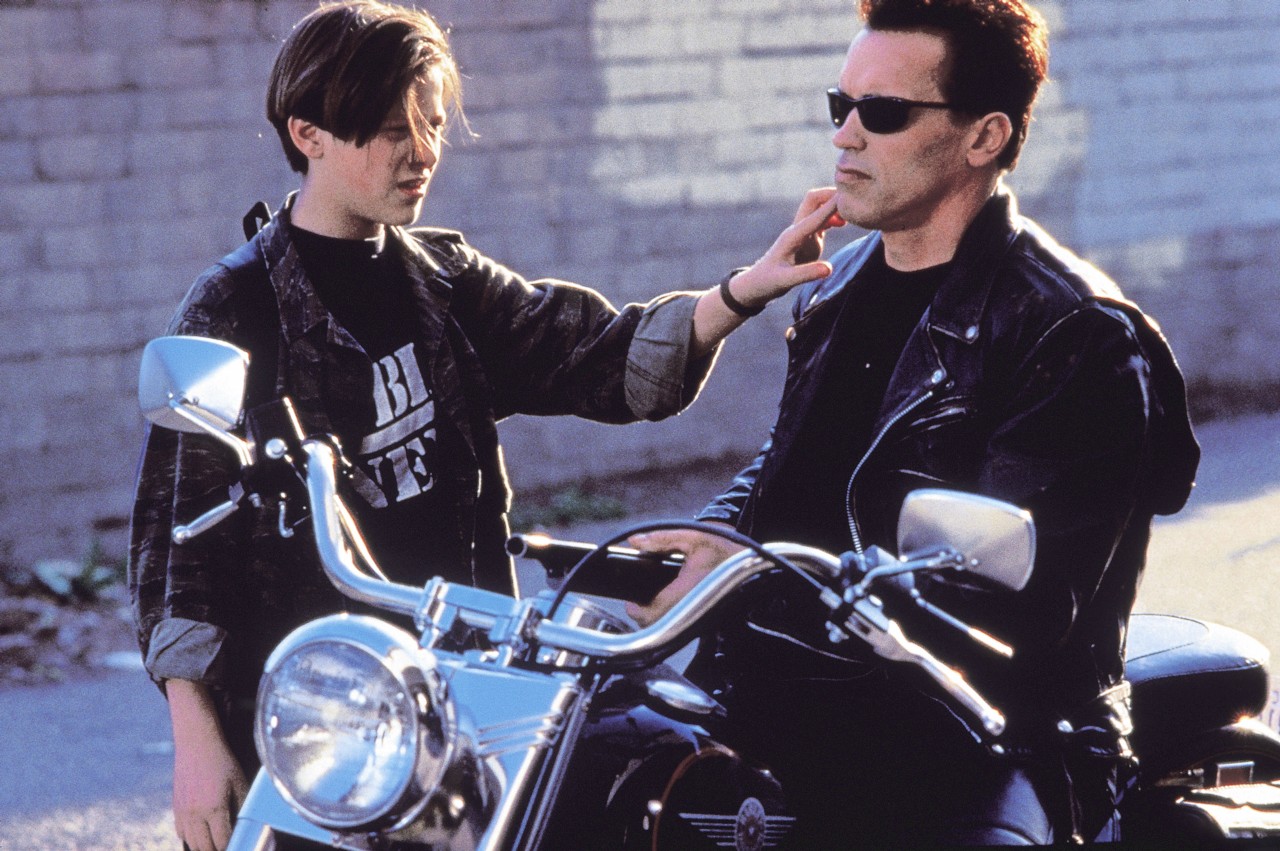 If there’s one thing film critics deserve a medal for, it’s wrestling with the severely twisted plot of the “Terminator” saga; the stories of the first two films may breeze by onscreen, but putting them in writing is like trying to force a German Shepherd into a cereal box. Nevertheless, a critic has an obligation to try, so here goes.

“The Terminator” begins in a future made barren by a nuclear crisis and a war between machines and the world’s human survivors, who are led by a much-older John Connor. On the precipice of defeat, the machines concoct a Marty McFly-style scheme: send Schwarzenegger’s Terminator (who appears human) back in time to kill Sarah before she gives birth to John—a mission foiled by Sarah, who defeats the Terminator, becomes pregnant with John, and grows obsessed with preventing the so-called Judgment Day that will become a catalyst for war.

By the time that “Terminator 2” begins, that dream has all but dried up. Between films, Sarah has been forced into an asylum (apparently on account of her ravings about the Terminator) and John is being raised by foster parents (Xander Berkeley and Jenette Goldstein, sporting a dowdy post-“Aliens” makeover). However, Sarah gets another shot at completing her mission when John and a new, benevolent Terminator (also played by Schwarzenegger) bust her out of the asylum, effectively enlisting her in a war against the T-1000, who the machines of the future have sent to slay John (got all that?).

We are presented, in short, with a more intriguing reality than in the first “Terminator.” Traumatized by being brutalized and told that she’s a liar, Sarah has become a being of pure rage (the mansplaining disavowals of her conviction that the end is nigh have the same misogynist bent used to silence Barbara Stanwyck in 1954’s “Witness to Murder”). That puts her at odds not only with the Terminator (who reminds her too much of the menace that stalked her in the first film), but with John, who comes to see the kindly new Terminator as a father figure.

All of this is a shock after the original film, in which the original Terminator was a portrayed as a single-minded hunter and Sarah as his resourceful prey. By mangling (in a good way) his original story formula, Cameron created a vision of Sarah, John, and the new Terminator as a factious family forced to unite in the face of annihilation—while reimagining Sarah as a warrior who tries to reconcile the demands of a world that degrades her, a destiny that torments her, and a son who just wants her to love him.

2. It features one of the best acting ensembles in sci-fi cinema 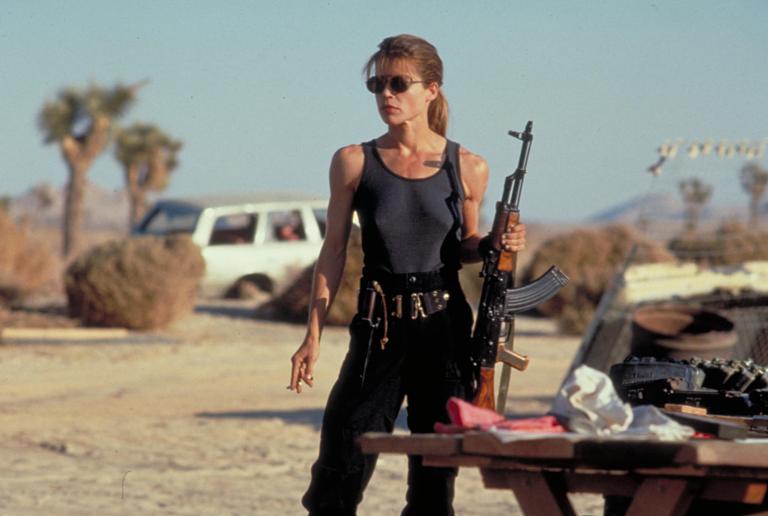 Furlong, Hamilton, and Schwarzenegger may never eclipse Hamill, Fisher, and Ford in the pantheon of legendary movie trios, but they’re one of the downright coolest ensembles in sci-fi history. That’s not to say that they’re flawless—Furlong is an occasionally awkward screen presence in the film and it’s difficult to decide whether Schwarzenegger has a gift for an acting like a robot or is simply a robotic performer. Yet the actors gave tough, to-the-point performances, making it impossible to imagine the film without them.

Schwarzenegger gets the best entrance of the three leads: he emerges into the movie stark naked, strides into a bar, and tells a particularly hairy patron, “I need your clothes, your boots, and your motorcycle.” Normally, it would be a frightening request, but Schwarzenegger delivers it with matter-of-fact stiffness that makes it seem oddly funny. That deadpan vibe is among the most popular and effective comedic weapons in the movie’s arsenal—and makes it all the more striking when Schwarzenegger tempers it with a melancholy edge that makes you wonder if the Terminator is as mechanical as he appears to be.

Furlong, by contrast, is pure gee-whiz, I-can’t-believe-I’m-in-this-movie gusto. His performance isn’t subtle, to say the least; John’s histrionic reaction when he learns his mother plans to commit murder (“She’s gonna blow him away!”) is one of many Furlong moments good for an unintentional laugh. Yet the actor’s greenness somehow feels fitting, perhaps because there’s something palpably authentic about his unvarnished, boyish bravado.

That makes him an ideal foil for Hamilton, who is perfect as a mentor so determined to shape her son into a soldier that she hasn’t taken the requisite time to mother him. When he and the Terminator rescue her from the asylum, she cruelly tells John that it was “stupid” to risk his life to help her—which triggers a clash between Sarah’s single-minded determination and John’s hunger for affection that the actors make reverberate with scalding, cathartic vigor.

Cameron deserves credit for feeling out that moment of intimacy amidst the movie’s high-tech carnage. That he cares so deeply about the emotional gulf between Sarah and John is part of why the movie works—and why, as in all the best blockbusters, there’s something more than the world at stake.

3. Its action is fueled by emotion

If zippy choreography was all that was required for a fight scene to find its rhythm, every director in Hollywood would hire “Matrix” mastermind Yuen Woo Ping and sit back. But like Christopher Nolan, Cameron understands that action means nothing if it’s not an extension of what a character is feeling. He knows that we don’t just want to see flashy punches and kicks; we want to see fights that reveal something about the people fighting (the way that the crop-dusting scene in “North by Northwest” peeled back Roger Thornhill’s steely reserve to reveal both his panic and his cunning).

It is in that spirit that “Terminator 2” attacks the senses, rolling out a series of shootouts and chases that often serve as the living embodiment of the characters’ inner lives—particularly Sarah’s. When she attempts to escape the asylum, you feel her exhilaration as she delivers savage payback for the indignities she has suffered there; when she finally faces the T-1000 at that steel mill, each bullet that she fires is like a burst of defiance, fueling her belief that it’s not too late to reshape her destiny (and the world’s).

In terms of fight choreography, “Terminator 2” also impresses. But that’s less important than the fact that at every given moment, you don’t just see each character fighting—you know what they’re fighting for.