After the bizarrely titled sequel “Terminator Genisys” was released in 2015, a video from the impish YouTube channel Screen Junkies called the film “a PG-13 ‘Terminator’ no one ever wanted or asked for, with no blood, no butts, no boobs.” It was a tongue-in-cheek denunciation, but it was also a reminder of the one of the elemental strengths of the R-rated first two “Terminator” films: by doubling down on gore, nudity, and bad words, they came to life in a way in a way that safer, cuddlier science-fiction movies never could.

The film’s three main characters certainly helped Cameron fulfill and expand that mandate. Sarah’s vicious fighting style wouldn’t be out of place in a Nicolas Winding Refn movie (Cameron makes sure we see a splatter of blood when she smacks a man across the face with a piece of a mop handle); John has a potty mouth (he teaches the Terminator to concoct his own crude insults, including, “Chill out, dickwad”); and flattering shots of the Terminator’s well-sculpted physique give his pressence a sexual charge (of the film’s 3D re-release, Cameron declared that “everything looks better in 3D, including Arnold’s muscles”).

On paper, all that makes “Terminator 2” sound awfully silly and salacious. Yet the movie thrives because of Cameron’s strategic decision to create a world that, while fantastic, has the roughened visual and verbal texture of real life. The future of humanity is at stake in “Terminator 2”; the film had to depict humanity in all its beautifully vibrant, crude, and violent glory for that threat to mean something.

5. It is a great example of anarchist filmmaking

“Tell your friend he’s getting fucked in the ass, and if he would stop squirming it wouldn’t hurt so much.” According to a profile published The New Yorker, Cameron once told a Fox producer to relay that message to an executive at the studio. It was a nasty sentence from a director who has uttered many, but it may have also been something more: A product of Cameron’s apparent disdain for authority, a disdain that bled into “Terminator 2.”

A strain of that contempt was present in the first “Terminator,” in which cops were portrayed as disposable Redshirts. Yet that movie had at least one kind, forthright authority figure (Paul Winfield’s Lieutenant Ed Traxler), whereas “Terminator 2” portrays anyone who tries to foist orderliness upon humanity as being delusional, stupid, and sometimes even greedy and abusive—which makes the film, like John Landis’ “Animal House,” a rare mainstream American movie that qualifies as an anarchist work of art.

Just look, for instance, at Cameron’s depiction of the asylum and the people who work there. While he could have portrayed them as well-meaning but misguided caretakers who want to help Sarah, he construes their organization as a hotbed of corruption—an enabler of sadistic bullies like Dr. Silberman (a delightfully repugnant Earl Boen) and his pudgy henchman Douglas (Ken Gibbel), who in one scene straps Sarah to a bed and licks her face.

Silberman and Douglas aren’t the only authorities who incur Cameron’s wrath in “Terminator 2”—the film also features a glass-shattering scene where the Terminator heroically defends John and Sarah from meddlesome police officers who try to stop them from halting advancements in artificial intelligence laying the foundations of Judgment Day.

And in a way, those cops include the T-1000—using his shapeshifting abilities (when not in human form, he sometimes looks like a glob of silver shampoo, thanks to the film’s Oscar-winning visual effects), he transforms into a police officer early in the film, associating the power of the badge with his own cruelty and malevolence.

Whether you find that kind of association to be repellent or fascinating will probably affect how you view the film. But for better or worse, “Terminator 2” is a more rebellious movie than its predecessor, and even viewers who abhor Cameron’s anarchism might have to conclude that part of the thrill of the movie is its stick-it-to-the-man swagger.

6. Its ending takes the “Terminator” series to the next level 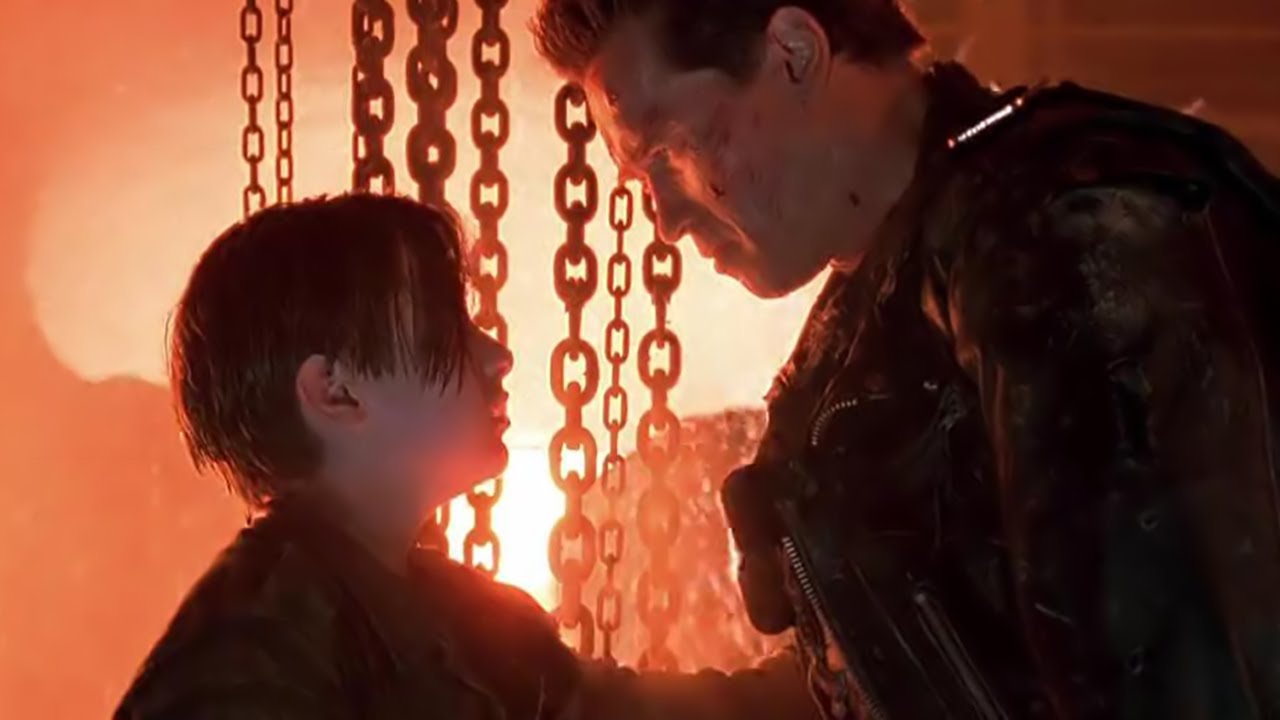 In the years after “Terminator 2,” Cameron’s stock reached stratospheric levels in Hollywood, thanks largely to the Oscar-winning success of “Titanic” and “Avatar.” Yet he never directed another “Terminator” (although he will apparently have some involvement with a forthcoming installment in the franchise)—perhaps because “Terminator 2” has an ending that, in a less franchise-happy world, might have been the perfect conclusion to the series.

It unfolds in that steel mill after Sarah holds off the T-1000 off long enough for Terminator to blast him into a vat of molten metal where he madly morphs, clinging to life until he’s finally destroyed. Yet it’s not a pure victory; as the Terminator explains, he too must die if they are to truly avert Judgment Day (since he could be used to create the same technology that caused the war between humans and machines in the first place).

And so John watches helplessly as his mother lowers his surrogate dad into the molten metal—but not before Sarah and the Terminator share a solemn, respectful handshake. No words are exchanged, but there’s no missing the significance of the moment: Despite their differences, she is acknowledging his unexpected selflessness, just as he is acknowledging the beauty of her commitment to both her son and the human race. Thus, the real and the artificial are reconciled, having seen humanity in one another.

Afterwards, Sarah tells us in voiceover that she now faces the future “with a sense of hope. Because if a machine, a Terminator, can learn the value of human life, maybe we can too.” Those words are both a nod and a rebuke to an earlier scene where we see two boys playing with toy guns and the Terminator says of humans, “It’s in your nature to destroy yourselves.” Maybe it is, but Sarah’s newfound optimism suggests that we can be better than that.

Besides, claims about what “is in our nature” likely mean little to Cameron. After all, he tends to get what he wants through sheer perseverance—not unlike John Connor, who utters the credo that courses through “Terminator 2,” underscoring the film’s enduring, blistering power: “The future’s not set. There’s no fate but what we make for ourselves.”