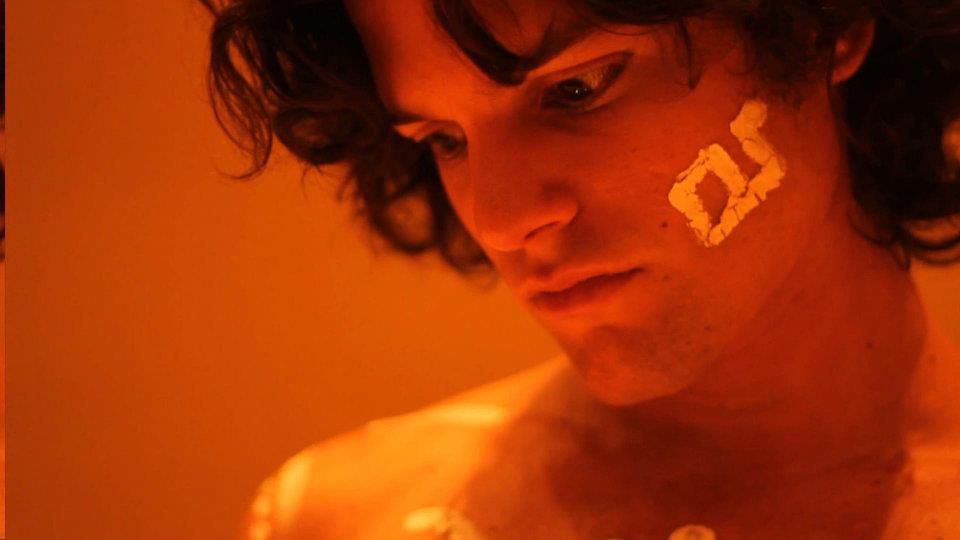 In this era of hyper-production and hyper-consumption, it should come as no surprise that some, or rather, many pieces of cinema remain underseen, for better or worse. The hype usually does the trick, so we get the movies with the excessive amounts of attention and not the least affected by the negative coverage, and we get the movies with little to no attention which often happen to be well-hidden gems (or pearls, at least).

There are other factors as well, but let’s leave them aside for now and get to the main course which is ten films you will probably like if you have a penchant for something other than the usual fare (and you don’t mind the eclecticism). 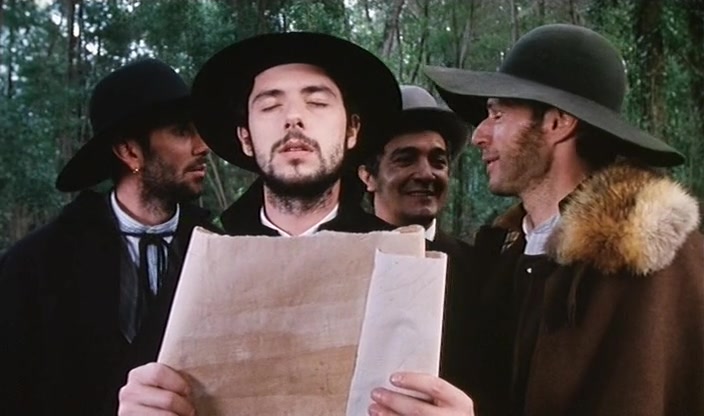 A masterwork of deliberately convoluted storytelling and shifting identities, “Love Torn in a Dream (Combat d’amour en songe)” bears all the trademarks of the great Chilean dream weaver, from the quirky “intellectual games” to intriguing visual flourishes which simultaneously create and dispel the illusion of cinematic reality.

Explicitly referencing Ramon Lull’s “ars combinatoria”, the film opens in a self-conscious fashion, with the mallet coming through the fourth wall. A representative of the Ministry of Culture, Dr. Alvaro Telles Antunes (João Bénard da Costa in a cameo role), welcomes the cast at a ceremony organized by the producer Paulo Branco and the Portuguese authorities.

“After an outdoor lunch”, as the narrator says, the director’s envoy (Ruiz is allegedly visiting pope, asking for blessing) explains that there will be nine stories interweaving and “interrupting” each other: “The Meditations”, “The Robber Mirror”, “The Healing Painting”, “The Twenty Two Rings”, “The Discussion”, “The Pirate’s Treasure”, “The Prophetic Site”, “The Castle of Dreams” and “The Traveling Companion”.

What complicates the narrative structure is the fact that these tales should form supposed twelve in total, with the characters leaping in and out of them, enchanted objects exchanging in-between them and the events having some sort of the butterfly effect through centuries. To make things even more labyrinthine are actors in multiple roles, with Ruiz’s regular Melvil Poupaud portraying the 18th century Catholic who discovers he is Jewish, and a modern-day student troubled by a website foretelling his future. And there are another two protagonists also played by Poupaud!

Elsa Zylberstein shines as a nun turned nymph, Lucrezia, and an eccentric young woman, Jessica, who falls for Paul and is pretty much into esoteric stuff, such as a sect called the “Onyric Church” whose members turn cinemas into hypnotherapy clinics (in one of many typically Ruizian self-reflexive twists). Also, she appears as a femme fatale sultana on a painting that has the power to cure rheumatism, acne and stomach pains.

Add the Devil himself, Socrates (the philosopher and the boat), a band of pirates, a cannibal corpse (not the death-metal band) and a man with a dog’s head to the mix and you got yourself one of the most impenetrable puzzles of all time. It may be though that they are ghosts which is why the ghosts don’t exist and which is why you shouldn’t bother with trying to solve the mystery (if there was any mystery to begin with). But, if you’re in for a witty, mind-boggling experience, don’t look any further. 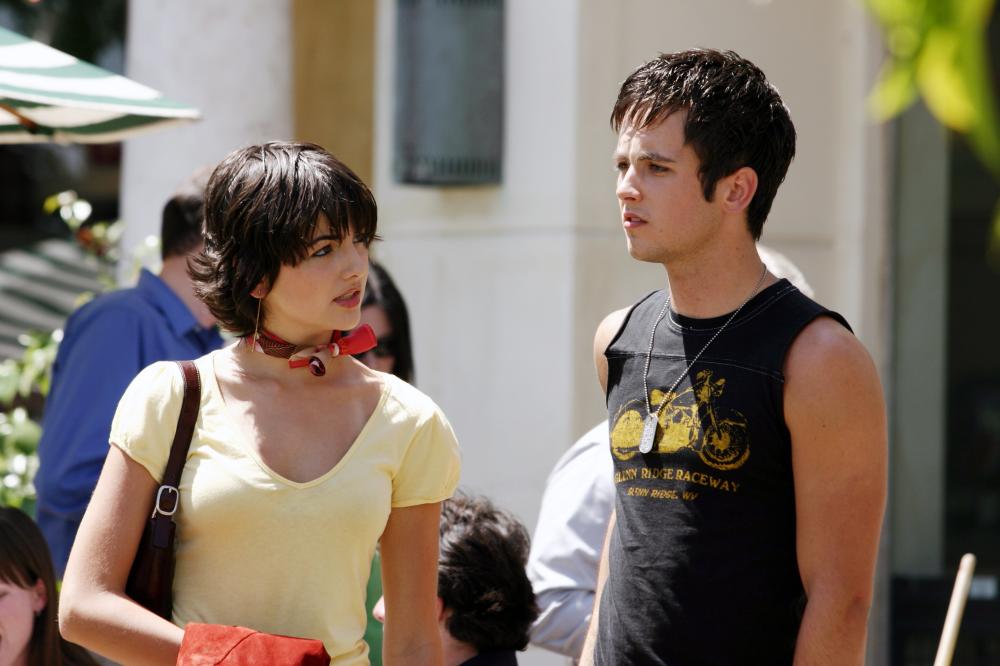 Enter Hillside Communities – your typical, seemingly idyllic American suburbia where the Sun always shines and living is carefree; “the best of all possible worlds” that needs just a little help shaped as colorful and tablets. Dealing the stuff and, in this way, spreading happiness is a high schooler, Troy, who narrates the story from beyond the grave.

Troy’s best friend is an introvert or, according to the bullies, “psycho”, Dean (the Jesse Eisenberg look alike Jamie Bell of “Billy Elliot” fame), who happens to find him hanging from the ceiling of his little hideaway in the backyard. After the incident, three local teens, Billy (Justin Chatwin), Lee (Lou Taylor Pucci) and Crystal (Camilla Belle), kidnap Dean’s little brother, Charlie, to blackmail him into bringing the stash leftovers, but it turns out it’s the wrong Charlie they have…

So, the kids aren’t alright, like in that Offspring’s 1998 song, but their parents’ condition is hardly any better and the ensemble cast that includes Glenn Close, Ralph Fiennes, Carrie-Anne Moss and William Fichtner, among the rest, does a terrific job at bringing them to (twisted) life. While they are busy organizing their parties, promoting VeggiForce vitamins or simply being self-absorbed to the point of turning away from burning problems, their children struggle with traumas and anxieties on their own.

“The Chumscrubber” shares its name with the headless character who fights hordes of “freaks and sub-human creatures” in a TV show and video game both rendered in trippy low-poly CGI that contrasts clean pseudo-realistic compositions of Lawrence Sher’s cinematography. It plays out like a farcical, off-kilter social satire that could be described as “Donnie Darko” meets “American Beauty” with an absurd twist related to dolphins. For a first-timer, Posin is pretty assured, if not as subtle as he would like to be, addressing the modern issues with hints of bitter irony. 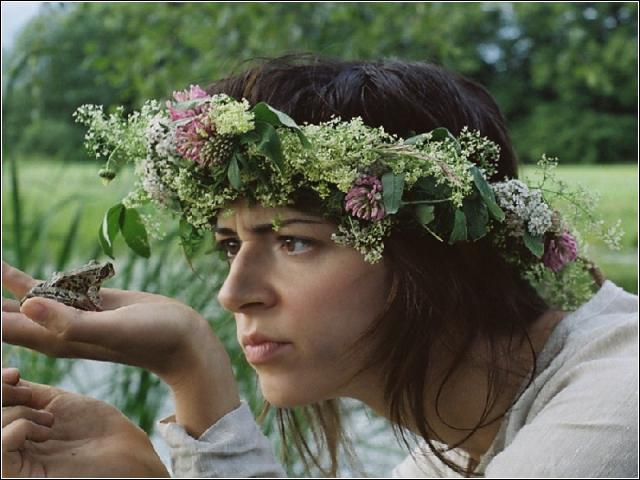 The first and only production spoken in the Seto dialect, “Taarka” is a biographical musical drama based on Kauksi Ülle’s play about Darja Pisumaa (also known as, believe it or not, Hilana Taarka, Darja Matrejeva and Vasila Taarka, 1856-1933) – a folk singer from the small village of Hilana in Meremae Parish, Võru County of southeastern Estonia.

Aside from the synopsis on the IMDb page and its variations on a few other sites, there is very little information in English on this film, which is really a shame, considering its rather exotic subject. Entirely told in flashbacks, as the aged heroine poses for her portrait, “Taarka” is a solid feature debut from the stage, film and television actor, director and producer Ain Mäeots.

It chronicles a few ups and many downs of a woman whose family was destroyed by her father’s gambling debts and who had to raise her children in poverty, as a single (unmarried) mother, faced with disdain of a “tightly-knit” community. Her rise to fame did not happen overnight – she often had to beg for her daily bread by singing on various occasions, until the arrival of the Finnish ethnographer and ethnomusicologist Armas Otto Väisänen (1890-1969) who had an ear for her improvisations.

Her lyrics always rang with truth, “sometimes bitter, sometimes funny, sometimes cruel” which applies to the inspiring, femme-centric story as well. Whether some parts of it are fictionalized or not, it feels like a life-affirming ride on an emotional rollercoaster, one filled with both laughter and tears.

The superb central performances by jazz musician Siiri Sisask, as well as Inga Salurand and Marje Metsur as the young and old Taarka respectively help us get involved with the character, whereby the authentic setting (kudos to the art department) and Elen Lotman’s picturesque cinematography keep our eyes wide open from the opening to the closing shot. 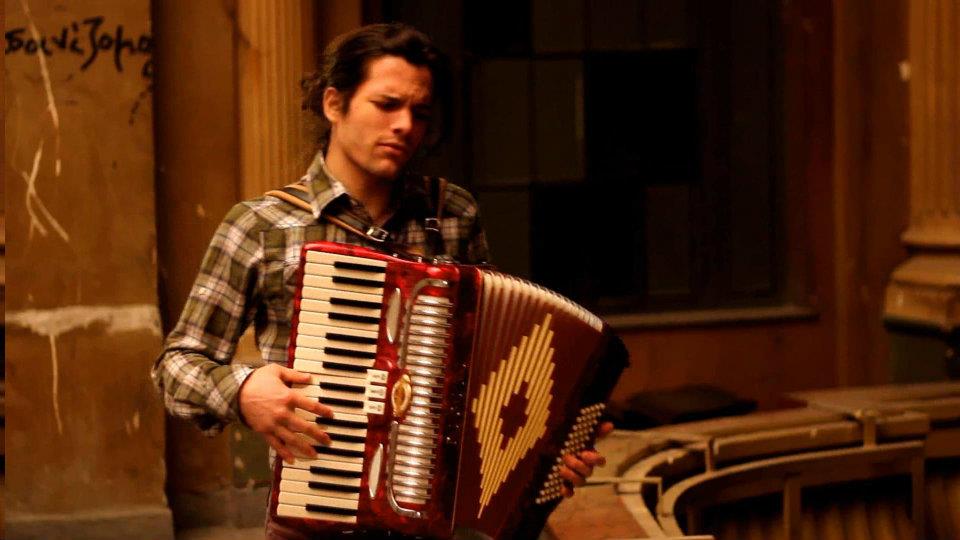 “Barricaded within the thick shell of vanity called ego, we lived through the miracle of coexistence, every man for himself. Reserved. Untouched. Bad students of strange old Zeno.”

Disregarding the norms of mainstream cinema, “Red City” marks an ambitious, if not completely successful debut from Manos Cížek who employs non-pros and takes cues from performance and installation art, music videos and documentaries, inter alia, to create a work that has an abstract and eclectic feel to it.

Based on the writings of Dinos Christianopoulos (born in 1931) and Maria Tataraki (1957-2010) who is also credited as a co-writer, this film is the meeting point of poetry, alchemy, philosophy, science fiction, Greek mythology, revolutionary spirit and Remodernist sensibilities. Despite being a bit rough around the edges, it provides us with plenty of eye-candy shrouded in a thick sonic haze.

Through the four chapters (The City, The Humans, The Machines and The Nymphs), it explores the ruins of humanity, inquiring into the questions of human condition against the backdrop of great political turmoil caused by “a Delphic malfunction in the android community”. A dystopian Athens where the allegorical or rather, anarchical “story” is set is actually the Athens of our times, which is clearly indicated by the intruding footage of recent riots.

The fragmented, loosely structured narrative involving a homeless man, rebellious “andies” and their self-centered masters, as well as two scientists fiercely arguing over a glass of whiskey doesn’t seem to let you wrap your head around it, which some might find frustrating rather than challenging. But, the viewers who are in for a cup of unrestrained experimentation will find a lot to like here. 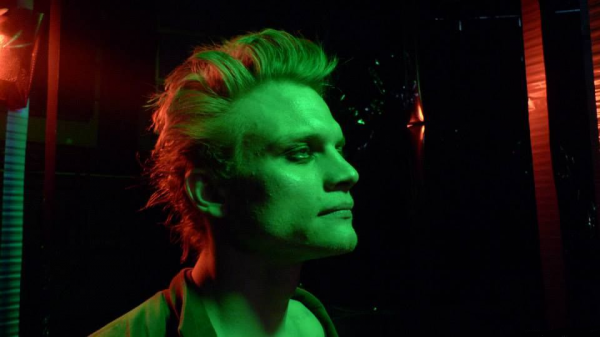 A queer film coming from Russia is not something you see very often, considering the homophobic climate out there, yet Lyubov Lvova and Sergey Taramaev take a risk in their first directorial effort – an arthouse drama of nihilistic proportions. Cold as December in Moscow, “Winter Journey (Zimniy put)” focuses on two young man and their turbulent, short-lived romance.

Eric is an aspiring opera soloist of immense talent, but with no self-control. He doesn’t accept his tutor’s advice to sleep, stroll and listen to Schubert (whose song cycle for voice and piano inspired the title) as much as possible, instead opting for cigarettes, a bottle of vodka, familial feuds and bohemian parties with the fellow artists.

Lyoha is a petty, shabby, homeless delinquent who is no stranger to sudden violent outbursts, one of which leads him to Eric. After a confrontation with a fellow passenger in a bus, he “accidentally” exchanges his lucky lizard keychain with the musician’s cell phone and headphones.

Later on, they meet once again and “become fascinated with each other’s contrasting lives” (Craig Takeuchi for The Georgia Straight), forming an unlikely friendship that grows into something more. Fuelled by the feelings of despair, longing and depression, the narrative is solidly structured around dichotomies – gay and straight, an intellectual and a commoner, the capital and the province – and imbued with socio-political connotations.

However, Lvova and Taramaev seem to be more into establishing the atmosphere of emotional starkness, inner turmoil and pessimistic gloom than telling the (tragic) story. Their vision is supported by the intense performances (and chemistry) from Aleksey Frandetti (Eric) and Evgeniy Tkachuk (Lyoha), top-notch visuals by Zvyagintsev’s regular DP Mikhail Krichman and refined, predominantly classical soundtrack.

471
SHARES
FacebookTwitterSubscribe
Subscribe via Email or RSS Feed
Pages: 1 2
Comments (9)
Great Movies From This Century You May Have Missed