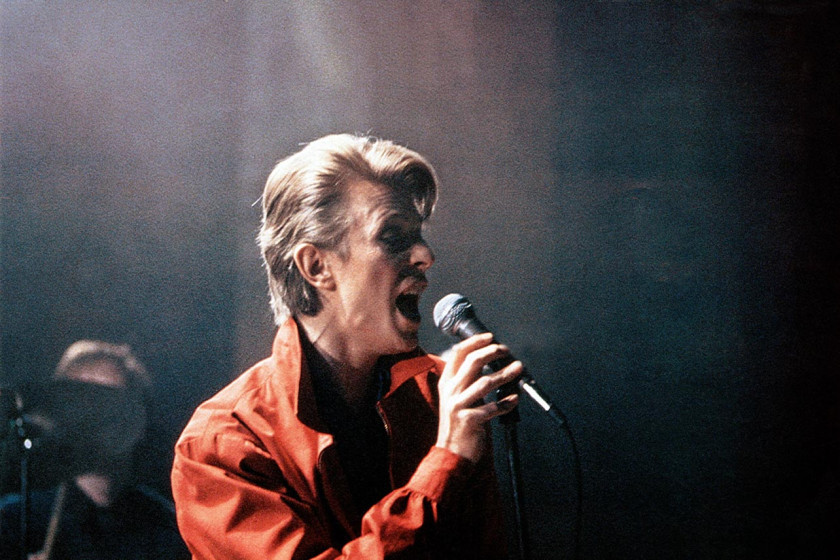 Since the advent of sound in motion pictures by the 1920s, musicians had found another outlet for creative expression and the abilities of gaining more exposure. Up until the 1950s, most of the music heard and performed was classical, opera, big band jazz and “pop” vocalists.

With the infusion of Rock and Roll, “soundtracks” with the songs of popular performers began to appear in films, as well as small roles for various bands and musicians. By the late 1960s and the counter-culture revolution, music of the times enhanced the mood of many motion pictures and two seemed to work well together.

The following list is a compilation of the last 50 years featuring musicians or bands who have made performance cameos in feature length films. While they aren’t the main focal point of the story, many of these films would perhaps require something more than just a montage with a catchy tune in the background.

The 1980s were certainly the Golden Age of bands performing in major motion pictures, but lessened in the 1990s. Unfortunately, by the turn of the century, with a great emphasis pushed on pretty faces that lack talent in the entertainment industries, “good music” with “good films”, has become quite scarce and less of a marketable commodity for major studios. 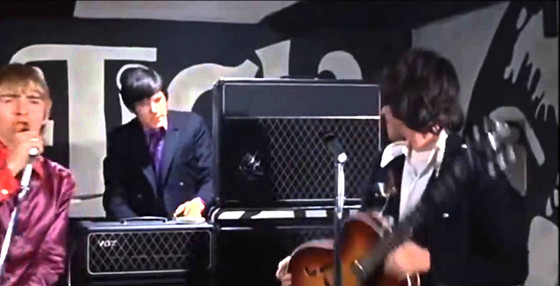 During the “Swinging London” years, a glamorous fashion photographer Thomas (David Hemmings) spends his days with beautiful models, attending fabulous parties and enjoying the luxurious lifestyle of excesses. While wandering through a park, he randomly snaps photos of two lovers frolicking and is later followed by Jane (Vanessa Redgrave) who demands the roll of film.

Thomas gives her another roll instead, but upon developing the park pictures, he notices a dead body and the killer, through doing multiple enlargements. He goes back to the scene of the crime, discovers the body, but becomes startled and runs off.

Inspired by Julio Cortasar’s story, “Las Babas Del Diablo (The Devil’s Drool)”, director Michelangeleo Antonioni captures the essence of the beautiful and mysterious London in the mid-1960s. Initially, he wanted the Velvet Underground for the rock club scene, but they were having difficulties acquiring work visas. So, Antonioni went with a local group, the Yardbirds (with Jimmy Page and Jeff Beck), who perform “Stroll On”.

The crowd is rather lifeless, up until Beck become angered with static from his amplifier and smashes his guitar. He throws the remains into crowd that finally comes alive, but Thomas runs off with the neck of the guitar, only to abandon it down the street.

2. Strawberry Alarm Clock in Beyond The Valley of The Dolls (1970)

The Kelly Affair, a three piece all girl psychedelic rock band have high hopes becoming successful musicians. Kelly (Dolly Read) is the lead singer/guitarist and is in a relationship with the group’s manager, Harris (David Gurian), while Casey (Cynthia Myers) is the bassist and Petronella (Marcia McBroom) plays the drums.

The four of them travel to Los Angeles and meet up with Kelly’s estranged Aunt Susan (Phyllis Davis), heiress to a family fortune, who agrees to share wealth. Shortly after, they attend wild parties, change the name of their band to the Carry Nations, find a new manager and struggle with life in the fast lines of sex, drugs and chaos.

Although not a sequel to 1967’s “Valley of the Dolls”, Roger Ebert and Russ Meyer’s script excels on many levels of campy comedy, melodrama and B-movie suspense. Directed by Meyer (“Faster Pussycat, Kill! Kill!”) the feature was rated X, but made ten times the budget ($900,000) at the box office, becoming a hit and Cult Classic.

The LA band, Strawberry Alarm Clock, make an appearance at a party when the Kelly Affair/Carry Nations first arrive on the scene and perform their 1967 hit “Incense and Peppermint”, along with “Girl from The City” and “I’m Coming Home”. However, the soundtrack only contains the latter tracks. 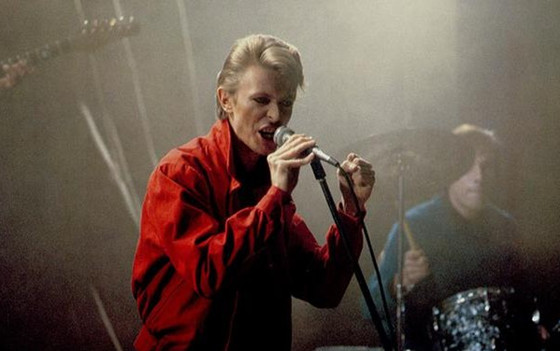 In West Berlin, Germany, 1975, twelve-year-old Christiane (Natja Brunckhorst) along with her younger sister and mother live in a multi-story apartment complex in dull neighborhood. Christiane grows bored of her average environment and has an immense love for David Bowie. Upon hearing about a new club in the city, but is too young to legally attended, she dresses up in high heels and heavy make-up, then goes with a friend from school.

While at the club, she meets an older boy, Detlef, who is in a clique where everybody experiments with drugs. The next evening, they attend a Bowie concert and ingest heroin. From that moment on, Christiane is hooked, falls in love with Detlef and begins using heroin on a regular basis. By the time she turns fourteen, she is a full fledge addict, living with squatters and turning tricks to support her habit.

Based on the 1979 autobiography of Christiane Felscherinow, director Uli Edel (“Last Exit to Brooklyn”) depicts the desolation of the heroin epidemic that swept through Europe in the 1970s and 1980s. Many of the young extras were real life addicts and prostitutes from the Bahnhof Zoo scene, the underground railways.

David Bowie’s involvement was due to the amount of time he spent in Germany during the late 1970s. His performance of “Station to Station” was shot in 1980, plus he provided the soundtrack songs (including “Helden/Heroes”, “V-2 Schneider”, “Warszawa” and others) from that time period, which subsequently helped the film gain notoriety, despite its gritty and controversial subject matter.

Honorable Mentions: David Bowie in “Absolute Beginners” and “Labyrinth”, both from 1986. 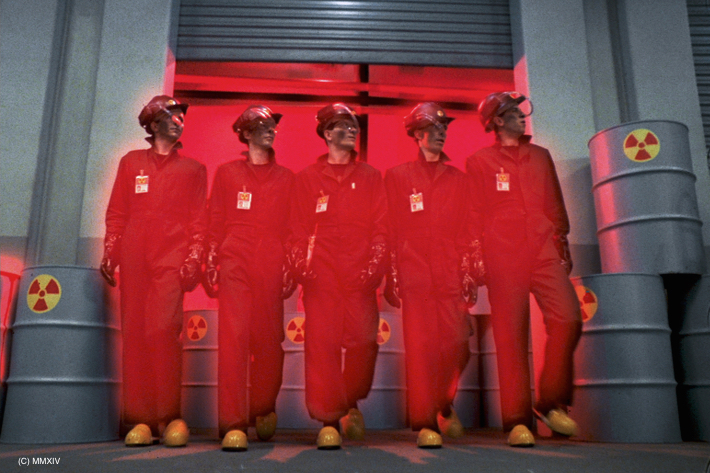 On the last day on Earth, the inhabitants of Linear Valley are completely oblivious to the impending doom. Young Otto Quartz (Dean Stockwell) has recently inherited a failing gas station-diner near a nuclear power plant known for several leaks and other safety violations. Lionel (Neil Young) is a bumbling mechanic who has deluded dreams of being a rock star.

Otto hopes to torch his recently deceased father’s establishment in order to collect insurance money and plans to fire most of the staff. Meanwhile the nuclear power plant’s garbage men (played by Devo) are known to dump radioactive waste in the small town.

Directed by Neil Young (under the pseudo-name of Bernard Shakey) and Dean Stockwell, “Human Highway” is a bizarre comedy with a cast that includes Dennis Hopper, Sally Kirkland, Charlotte Stewart, David Blue and a few others.

Devo (as the nuclear waste workers) perform “It Takes a Worried Man” and then later a variation of “Hey, Hey, My, My” with Neil Young, followed by a ten-minute jam session. Mark Mothersbaugh did the film score, which was a first for him. The film received poor reviews, then was shelved until a 1996 VHS release and has yet to appear on DVD.

5. The Professionals in Ladies & Gentlemen, The Fabulous Stains (1982) 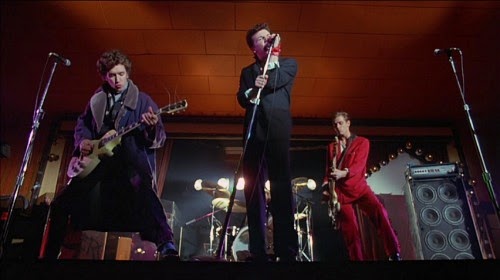 After the death of her mother, seventeen-year-old Corrine Burns (Diane Lane) works as fast-food waitress to support her and her younger sister, Tracy (Marin Kanter). When a news reporter interviews Corrine about the town’s dwindling economy, she becomes belligerent and gets fired. Once the news segment airs, teenagers see Corinne as the voice of their generation and are curious about her band the Fabulous Stains, with her sister and their cousin, Jessica (Laura Dern).

While attending a show, the three girls are approached by a promoter to join a tour with aging glam-metal band, the Metal Corpses and rising punk band, the Looters (played by the Professionals). Even though the girls have never played out nor have any recorded material, they seize the opportunity.

A script written by Nancy Dowd (under the alias of Rob Morton) and directed by Lou Adler (“Up in Smoke”), the 1982 feature served as precursor to the Riot Grrl Movement of the 1990s.

Fresh from the break-up of the Sex Pistols, guitarist Steve Jones and drummer Paul Cook, formed the Professionals in 1979 and drafted Paul Simonon, the bassist from the Clash for their appearance in the film. However, the Looters’ singer, Billy (Ray Winstone), was chosen by the director, but the songs they performed (“Join the Professionals”, “Conned Again”, “La La La” and “Don’t Blow It All the Way”) were original Jones and Cook compositions. 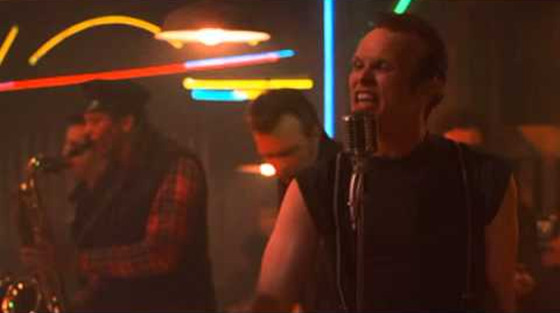 In another time and another place, a beautiful singer, Ellen Aim (Diane Lane) and her band the Attackers return to their hometown to perform at a concert. Unfortunately, Raven (Willem Dafoe) and his biker gang called the bombers, storm the stage, kidnap her, beat up the band and terrorize the neighborhood.

Witnessing the debacle, Reva (Deborah Van Valkenburgh) contacts her brother, Tom Cody (Michael Pare) a former soldier and Ellen’s ex-boyfriend with the hopes that he’ll rescue her. Reluctantly, he teams up with a drifter/soldier, McCoy (Amy Madigan) and the singer’s current boyfriend/manager Billy (Rick Moranis) to infiltrate the seedy hangout of the Bombers. Although they are successful, Raven is relentless and now has a score to settle with Tom.

“A Rock and Roll Fable” directed by Walter Hill (“The Warriors”), is set in a time period that merges the 1950s with the 1980s. The film is rich with many stylized music video sequences containing songs by Fire Inc (written by Jim Steinman), Marilyn Martin, Maria McKee and a few others.

The Rockabilly band, the Blasters, contributed two songs (“One Bad Stud” and “Blue Shadows”) at Torchie’s, the hangout of the biker gang. Sharing their screen time as a go-go dancer is Marine Jahan, who double for Jennifer Beals in “Flashdance”. Although “Streets of Fire” bombed upon its release in 1984, it built up a cult following over the years and compliments to Dan Hartman’s hit song “I Can Dream About You”.