As technology continues to play an increasingly dominant role in everyday life, the question is raised: What effect will it all have on the future? The ten films on this list all attempted to answer that query.

All of them gaze into the future and speculate on humanity’s evolving relationship with technology. The tendency is to go dark and many of these films do go in that direction – yet most of them are deeply humanistic.

With 2001: A Space Odyssey, Stanley Kubrick not only expanded the possibilities of science fiction, but that of cinema itself. The bold premise muses upon the origins of humanity and its ultimate destiny in the universe.

The opening “Dawn of Man” sequence recreates a major step in human evolution, the discovery of tools. After a monolith appears a tribe of primates discover how to protect themselves from predators by using bones as weapons. Their weapons allow them to survive and emerge from their caves, leading to their eventual supremacy over the earth.

The leap to the Space Age in a single shot remains one of the all time great shots in film history. As Johan Strauss’s “The Blue Danube” plays on the soundtrack spacecraft parade across the screen in a regal dance.

Yet people seem dwarfed by their own creations, no longer the master of their environment like their primate ancestors. To survive in space, humans must rely on their machines.

A plot takes shape after another monolith is discovered on the moon, which may be evidence of extraterrestrial life. To pursue the mystery of the monolith, a crew of astronauts and scientists embark on the first manned mission to Jupiter.

Aboard the spaceship Discovery, the HAL 9000 computer rules as a benevolent dictator as astronauts Bowman and Poole man the ship while the rest of the crew sleeps in hibernation. When HAL inexplicably decides to kill the crew, the astronauts must revert to their animal survival instincts and wrest back control from HAL, enhancing Kubrick’s theme that conflict and evolution are interconnected. Then Bowman enters the star chamber for a journey into the infinite.

Dr. Strangelove and A Clockwork Orange, Kubrick’s other statements on technology, were more cynical and pessimistic than 2001. As Carl Sagan observed in his book Cosmos, nuclear technology could destroy the planet or pave the way to the stars. 2001 engages with Sagan’s dichotomy with meticulous grace.

2001 anticipated 21st century inventions such as I-Pads and video phones, although space travel into the outer solar system remains in the realm of science fiction. As for humanity’s relationship to technology, 2001 is essential viewing.

THX-1138 depicts a society enslaved by its technology. The electronic noise that pervades the soundscape reinforces the alienation. Machines rule the environment, while language has devolved into technological nonsense. Everyone’s a number, a cog in a nightmare of banality.

On the DVD commentary, Lucas and sound mixer Walter Murch spoke about how THX-1138 came out of their anxieties about the 1960s. Herbert Marcuse’s 1964 book One Dimensional Man argued that the capitalism of the West and the Communism of the East were equally detrimental to the masses.

The world of THX-1138 mirrors the ideas of Marcuse: soulless conformity, consumerism, endless bureaucracy, pointless labor, and lack of any human connection. Unbearably cold and disorienting, THX-1138 takes the Marcuse thesis to its logical conclusion.

In spite of the dark vision of THX-1138, the story develops into one free will and liberation. When two roommates, THX (Robert Duvall) and LUH (Maggie McOmie), go off their drugs and discover feelings for each other, they decide to pursue freedom.

Lucas revisited the same themes in Star Wars: escape and transcending technology. But the bleak reality of THX-1138 continues to resonate as a warning of where humanity could end up.

Every Sci-Fi film to come in the wake of Kubrick’s 2001 bore its influence. Few answered Kubrick’s movie with more wit and humor than John Carpenter’s Dark Star.

The story follows the misadventures of slackers traveling through space. As their rickety ship floats around destroying planets for unspecified reasons, the bored crew of misfits pass the time by listening to country music, reading trashy novels, and trying to keep their pet alien under control. Meanwhile their “deceased” commander lives suspended in frozen animation.

When the Dark Star begins to malfunction they are totally screwed. There’s no sense of unity either, all prefer to zone out in their own worlds. Like Kubrick’s astronauts they have surrendered to technology and live in a terminal malaise.

Dark Star also brings a blue collar perspective to technological progress. Throughout history only the affluent have access to the best innovations, while the rest must wait for the trickle down effect. Sci-fi movies rarely focus on how the other half lives. There’s no transcendent encounters with divine beings or portals into a higher consciousness in Dark Star. Just never ending monotony. 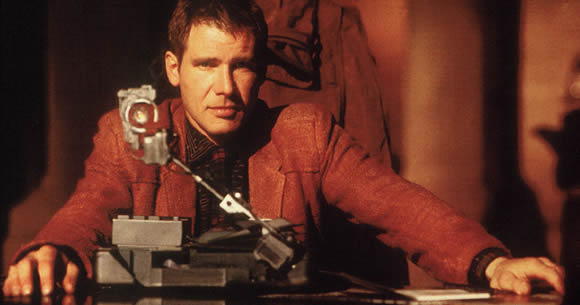 Blade Runner introduced the world of Phillip K. Dick to movie audiences. Set in the year 2019, human replicates are used as slave labor on off world colonies, while futuristic L.A. is overcrowded and shrouded in darkness. Director Ridley Scott envisioned an “urban” science fiction based on American film noir.

Harrison Ford gives an anti-heroic performance as “Blade Runner” Rick Deckard, a detective who tracks down and “retires” replicates. When renegade replicates have escaped to earth Deckard is called out of retirement to kill them and ends up in a web of corporate intrigue.

As Deckard proceeds he engages in a romance with Rachael (Sean Young) and discovers she’s a replicate, creating further existential issues. All the replicates engender sympathy because they are aware of their own mortality and want to extend their life. What could be more human?

Their leader Roy (Rutger Hauer) is unforgettable in his final soliloquy on the mystery of life, one of the great expressions of humanity ever expressed in a science fiction film.

Blade Runner assumes the definition of what it means to be human will someday change, harkening back to a basic conflict of science fiction: What does it mean to be human?

In contrast to the trippy cosmic voyage of Kubrick’s 2001, David Cronenberg’s Videodrome is a “bad” trip into a technological hell.

Rick Baker’s potent special effects bring the hallucinations to life as Max’s body begins to merge with technology. He gets sucked into television screens and inserts video tapes into his stomach. The violent TV signals lead anyone who watches them into madness and violence.

Videodrome takes the phrase “TV will rot your brain” to the next level. Many films ran on Cronenberg’s idea of evil existing in technology, such as The Ring and The Matrix. David Foster Wallace’s 1996 novel Infinite Jest revolved around a film so pleasurable it kills anyone who watches it. Perhaps more than any other film, Videodrome questions what media and technology can do to the human psyche.

These days one can go anywhere and observe people in séance with their I-phones, as if they long for a merging between device and body. Who knows where it will go? The Ted Talk utopians see infinite possibilities of a technological utopia, and then there’s Cronenberg’s Videodrome ready to crash the party.