With his much discussed background as a painter and all around visual artist, David Lynch’s ability to convey terror and dread through images and sounds have always come across as one of the director’s main strenghts in his work as a filmmaker.

His works are equally honest and unassuming as well as being raw, challenging, and universal in their recurring themes. His films are able to resemble our most common dreams and nightmares in all of their disorienting and terrifying scope without being obvious or preachy.

On the other hand, his filmmaking is always full of intention, intuition, and a visceral core, a combination that has birthed some of the most disturbing and emotional scenes found in cinema, regardless of its genre.

10. The “impregnation” scene in Eraserhead 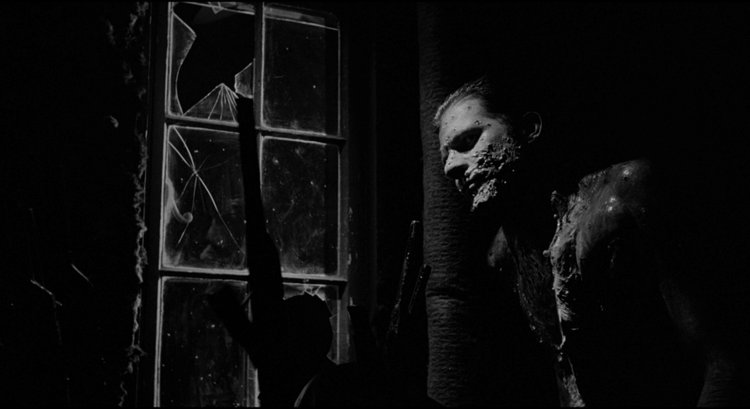 Lynch’s opening sequence from his first full-length feature film about the anxieties of parenthood works as a good introduction for some of the quirks and idiosyncrasies that would later become the director’s signature approach, from the dreamlike visuals and unconventional editing to the dread conveyed by the use of loud ambient noises and industrial motifs.

The 1977 film, shot entirely at night over a five-year period and starring Jack Nance as Henry and Charlotte Steward as his girlfriend Mary, opens with what is supposed to be the fecundation of Mary (the name of “Mary” is not a coincidence since Lynch himself said that he was reading the Bible while he was making the film).

Instead of depicting the act itself, we are shown the protagonist’s head floating through space. While his image fades away, the camera approaches what seems to be a desolated planet. After navigating through its winding rock formations, we get to a cabin where a scarred man awaits next to a broken window. As soon as a spermatozoon-like monster materializes from Henry’s mouth, the scarred man activates the levers in front of him, making the creature fall into a pool of silver liquid.

Even though the sexual metaphors are pretty striking, Lynch contextualizes them inside some cosmic horror imagery, from the darkness that surrounds the asteroid of sorts where the sequence takes place, to the alien-like features from Henry’s seed in a sequence that would also mark the beginning of one of the most legendary American directors from the last 40 years.

As its opening sequence perfectly encapsulates, “Blue Velvet” (1986) is about the terrors and dangers we walk amongst in our daily life. Considered one of the seminal works in Lynch’s filmography, the 1986 film tells the story of Jeffrey Beaumont (Kyle MacLachlan), a young middle-class man who finds himself involved in a kidnapping plot after discovering a severed ear on the ground.

Determined to conduct the investigation by himself, the protagonist follows a clue that leads him to sneaking into Dorothy Vallens’ (Isabella Rossellini) apartment. There, he is surprised by Vallens herself, who holds him hostage while threatening him with a kitchen knife. After a brief and ambiguous sexual encounter between the two, a knock at the door makes Vallens hide Jeffrey in her closet. The man behind the door is Frank Booth (Dennis Hopper).

A few minutes are more than enough for Lynch to show us the extent of the threat that Booth poses to the world of “Blue Velvet.” From perverse episodes of infantilism mixed with random fits of rage to the coercion, threats, sexual assault and physical abuse directed toward Vallens, the film makes it is clear from the beginning that Booth is a man who won’t listen to reason.

There is just no subtlety in his behavior. Everything he does is extreme, vile and violent: he makes Vallens expose herself to him, assaults her both verbally and physically, threatens her with a pair of scissors, and after sexually abusing her and climaxing while doing so, proceeds to punch her in the face.

The impact that the whole sequence has in the film itself is even more terrifying. Booth’s introduction marks a dramatic change in how Jeffrey and the viewer perceive the world described in the film until that moment, turning it from the quiet, friendly, and peaceful community from the beginning to an inhospitable and alien place where people carry on with their normal lives, oblivious of the monsters who live next door.

Lynch may have explored this theme in many of his works, but very few times has this point been clearer than with “Blue Velvet.”

Although Lynch’s 1997 nightmarish neo-noir has more than its fair share of scares, as well as being one of the his most all-around dark films, the introduction of the Mystery Man (Robert Blake) is usually considered one of the film’s most haunting and memorable moments.

While attending a party with his wife Renee (Patricia Arquette), Fred Madison (Bill Pullman) is approached by a creepy looking man who insists on having met him before. As their conversation develops, the man reveals that he is also at Fred’s house at the same time they’re both at the party.

Due to the protagonist’s disbelief, the man pulls out a mobile phone from his jacket and tells Fred in a menacing tone: “Call me.” Fred does the call and after letting it ring a couple of times, the Mystery Man answers from the other end with, “I told you I was here.” When a visibly shaken Fred asks him about his identity, he is met with the man’s laughter, both in person and through the phone.

The Mystery Man introduction turns a relaxed and crowded space into an unfamiliar and tense one in a matter of seconds. Lynch lets the diegetic sounds from the scene fade away in favor of his signature creepy ambient noise while subtlety dimming the lights around the conversation, effectively isolating Fred not only from the party, but from a world he thought he understood.

7. The beginning of The Elephant Man

The origins of “The Elephant Man,” aka John Merrick (John Hurt), are represented in what probably is the first straight horror scene from the director.

In a dreamlike sequence similar to the one from “Eraserhead” in its themes of conception and birth, we see a beautiful woman inside a picture frame who will later be revealed to be Merrick’s mother.

Suddenly, the music stops and gives way to various images of a group of elephants marching toward the camera. The woman, now standing in front of them, is knocked to the ground by one of the animals after it is suggested they sexually assault her. At the end and as a white smoke cloud fills the screen, we hear the cries of a newborn.

Lynch avoids any kind of realism to enhance the nightmarish quality that pervades the whole sequence, from the constant flashes to black and the backlit elephants marching in the dark, to the special attention that the director pays to its sound design, conveying the helplessness felt by the woman by silencing her screams at the same time that we are deafened by the animals’ roars.

While the rest of the film does not feature any kind of supernatural elements whatsoever, its opening scene skillfully rides the line between real events and folklore, leaving the viewers asking themselves about the true nature of the film’s protagonist, and leaving them with a sense of magical realism that last until the credits roll.

6. Dorothy Vallens’ apartment at the end of Blue Velvet

The most frightening sequence from the 1986 film once again takes place at Dorothy Vallens’ apartment.

After encountering a beaten up Vallens, Jeffrey decides to return to her place while Sandy (Laura Dern) tries to contact the authorities. Just after crossing the door, Jeffrey finds Dorothy’s dead husband tied to a chair. Standing motionless in front of him is Frank’s associate, the Yellow Man, bleeding profusely from a head injury with his brains exposed.

The complete silence is interrupted by the radio inside the presumably dead man’s yellow jacket, who suddenly knocks down a nearby lamp, also startling Jeffrey in the process. The scene ends with a montage of the confrontation that is taking place elsewhere between the police and Frank’s men while “Love Letters” by Ketty Lester plays in the background.

The sequence is tragic and macabre at the same time. The framing and the strange disposition of the corpses, as well as how the furniture is arranged around them, gives the scene an unreal feel, as if Jeffrey were attending to some kind of play. The scene has a lot of details for the viewer that suggest how the whole encounter may have went down, like the Yellow Man still having his gun holstered, the blue velvet gag in Dorothy’s husband’s corpse, and the broken television, making the scene even more fascinating to figure out.

It’s a chilling moment that reinforces how uncompromising the film has been on a whole, refusing to adapt to genre conventions or viewer expectations, but nonetheless ending up being regarded as one of the best works of its decade.