In a book that I refer to as the Bible of cinema, “Sculpting in Time,” Andrei Tarkovsky states that contemporary film should separate itself (as much as possible) from literature. If it doesn’t, then its future as an art form may be in danger due to the difficulties that arise if one tries to define traditional filmmaking without almost completely relying on plain plot.

When movies were silent, everyone agreed that film was, above all else, visual media. Cinematic language was easily defined by its strict limitations. Then, when the talkies came around, things got a bit muddier. Now you could tell a whole story through dialogue, much like theater. It was easier that way. The audience would be comfortable and the artists behind the pictures could communicate their messages without finding a way to express them visually.

So it came a point in which cinema was considered a hybrid between literature and theater, not really an art form by itself. We’re talking about the classic Hollywood days when an awkward transition was taking place. Then came a generation of cinematic geniuses, led by Orson Welles, who figured out how to reconcile dialogue-driven drama with meaningful cinematic language. That way they guaranteed the future of films as an independent art.

These events constituted the fundamentals of all contemporary cinema, making all the following movies possible.

The filmmakers responsible for the films featured on this list revolutionized the way we think about audiovisual storytelling and pushed the medium forward in significant ways. That’s why they deserve to be discussed. 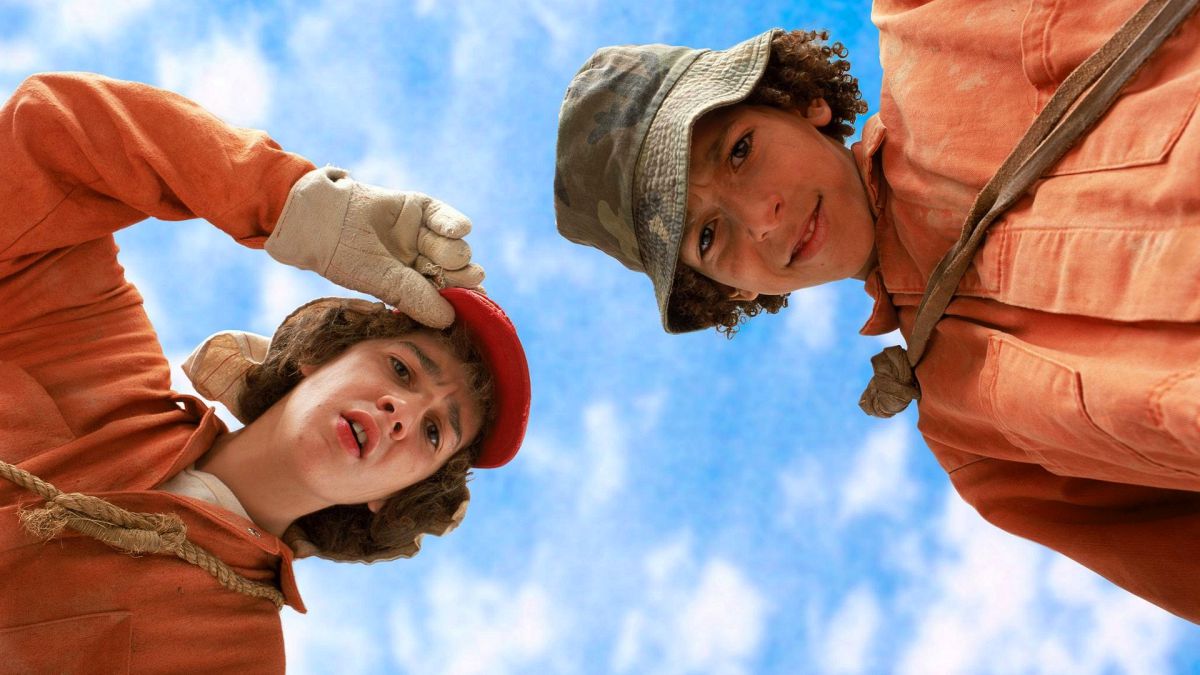 I know you’re probably thinking, “Why is this kid’s movie being featured in a list with such a transcendental introduction and subject matter?” Well, let me tell you something, my perceptive and prejudiced friend, do not judge a movie by its shitty poster, or casting of Shia Labeouf. The script for “Holes” should be studied at every respectable film school.

“Holes” is based on a book, a very complex one, plot wise. And somehow, the filmmakers that adapted it into a movie managed to get me (at the time I first watched it, a remarkably oblivious 10-year-old) to understand, and still remember to this day, every single detail of its all engulfing plot.

Let’s do a quick recap, shall we: so there’s this guy named Stanley Yelnats IV (Shia Labeouf), who’s sent to a teenage labor camp for supposedly stealing a famous baseball player sneakers from a charity event. There he has to dig holes all day to “build character,” according to the crazy bunch who runs the place.

The real reason they have to dig holes? Well, it turns out that the head of the camp (Sigourney Weaver) was forced to compulsively dig holes on the desert as a child because her grandfather wanted to find an ancient buried treasure, but despite their efforts, they never succeeded, so know she wants to increase her chances by forcing all these kids to dig holes all day.

But wait, which buried treasure could be worth all that trouble? Well, the movie doesn’t fall short on explaining that: in the old Wild West there was a school teacher named Katherine Barlow. She was very beautiful, so most men in town wanted to seduce her, but she was in love with Sam, a part-time onion seller, part-time master repairman, full-time black man.

Obviously that was a big no-no back then, so when a crowd of cowboy Nazis saw Katherine kissing Sam, they proceeded to burn her school and kill him. The sheriff of the town didn’t gave a single fuck during all of this, so Katherine kills him and in that moment she becomes an outlaw with a burning desire of revenge against cowboy Nazis.

Kate ends up stealing the fortune of one of Labeouf’s unlucky ancestors, and buries it in the desert. And that’s how the famous treasure got there.

Apart from this, there’s the story about Madam Zeroni, the lady who cursed Labeouf’s family, condemning them to endless bad luck, but if I’d dare to also tell that tale, this list would be endless.

So how did I remember all of that after all this time? Well, the film’s script is AMAZING, along with the fact that all of this is communicated through an ingenious set of flashbacks, montages and thrilling scenes, structured in a way that it never feels as though the filmmakers are being overly verbose.

Forget “Tootsie,” “Star Wars” and “The Godfather” or any other example that screenplay books love to cite, the guy who wrote script for “Holes” is the real MVP.

Defining this film is a difficult task. Superficially, “The Master” is a movie that illustrates the early days of Scientology. For the uninitiated, Scientology is a religion invented by crazy mastermind L. Ron Hubbard, a guy with an godly talent to write nonsense and public speaking that few man in history have equated. Philip Seymour Hoffman plays Lancaster Dodd, the movie version of Hubbard. He meets Freddie Quell, an unstable World War II veteran who ends up joining the cult.

So, what is “The Master” really about, below the surface? Well, I think Tarkovsky can help us with this: “Never try to convey your idea to the audience — it is a thankless and senseless task. Show them life, and they’ll find within themselves the means to assess and appreciate it.” I think Paul Thomas Anderson had this phrase (or the general philosophy behind it) in mind when he was producing “The Master.” In the movie we simply follow two friends, changing themselves and each other, learning from each other without the slightest hint of condescension. We see their friendship develop through a series of difficulties and… that’s it.

The picture doesn’t force any narrative onto the viewer, that’s from where its storytelling complexity comes from.

Most of us are used to movies that spoon-feed their story to the audience, bit by bit, with exposition and forced character development at times. “The Master” is the work of a true genius because it takes a master filmmaker to simply portray real life and let the viewer figure out the rest on his own.

“8 ½” was the film that introduced dumb 14-year-old me to a style of cinema I didn’t knew existed.

I discovered it by chance; I was a big fan of Woody Allen at the time. I came across “Stardust Memories,” and after liking it very much I read its Roger Ebert review. He mentioned that the film was an homage to an Italian film called “8 ½”: my spider-sense went off and I had to get up and buy it the same day! After watching, I was never the same and it remains my favorite movie to this day.

I had never seen a character developed as Guido Anselmi is in “8 ½.” After it ended, I felt like I actually knew him: his fears, hopes, frustrations and dreams became mine for its running time and my following rewatches.

That’s when I was introduced to character-oriented narrative. I don’t know if “8 ½” is certainly the first film to tell its story by directly immersing the audience into the main character’s mind, without caring about anything else that’s actually going on around him (Is there really such thing as “objective reality”?). The traditional omniscient narrator is replaced by the sometimes oneiric, sometimes absurdly funny, train of thought of the protagonist. That way, Federico Fellini managed to create an immersive cinematographic experience as I had never seen before or since.

I’ll be honest with you: the first time I “saw” “The Tree of Life” I fell asleep several times and ended up thinking that the movie was a pretentious snooze festival. Again, dumb 14-year-old-me is to blame.

I didn’t watch it again until several years later. I managed to stay awake all throughout, only to realize how an idiot I was back then. The movie left me with tears in my eyes and shivers down my spine through various scenes. I just couldn’t believe what I was watching.

A grieving family, the creation of the universe, a boy and his brothers growing up, what do these events have to do with each other? Well, they’re all expressions of life, I guess; it doesn’t matter. The film lends itself to all sorts of interpretations; but its storytelling is so simple and, at the same time, really complex.

There are no antagonists, story beats, acts, or any other metric that could be used to decompose a film. “The Tree of Life” is simply a big chain of moments, beautiful instants that make me nostalgic and euphoric just for having the opportunity of being alive and feeling those shivers up my spine and through my skin.

If there’s a film specifically engineered to twist your brain into oblivion, this is it. Every hacky “everything was a dream” movie and Netflix random twist fest was “inspired” by “Mulholland Drive.”

Federico Fellini and David Lynch have two very different conceptions of “dream-like.” For Fellini, it means a raw expression of the subconscious, a window into the deepest desires and fears of the soul. For Lynch, on the other hand, dream is synonymous with atrocious nightmare from the darkest depth of mental hell in which monsters and aberrations run free, tormenting the dreamer in an endless variety of ways.

To talk about the plot of “Mulholland Drive” is kind of pointless, and if you haven’t seen it yet, oh boy, you’re in for an unparalleled cinematic experience I bet you’ve never felt before. And it’s better to go in knowing as less as possible. But I’ll tell you this: “Mulholland Drive” is Lynch’s masterpiece, which is to say a lot. And don’t take anything you see for granted, as nothing is what it seems and anything is permitted.