“Last Year in Marienbad” must be one of the very few films to present itself as a hypnotic puzzle, daring its audience to first be baffled and then to talk about the picture for hours with their friends, trying to find the cohesive narrative behind it all. However, there is no secret to be found. The director assured the public that there wasn’t any sort of hidden meaning inside his film; that what really matters are the characters, and how do they relate to one another.

We circle around a massive mansion for the majority of the movie. “X” (the narrator and main character) is obsessed with the beauty of the architecture and dwells on it endlessly. He thinks the building has something magical. An allure that enchants him like no other thing in the world, except for “A,” a beautiful woman he supposedly met in that same house a year ago.

The film introduces the concept of an unreliable narrator unlike any other film had done before. X is trying to get A to remember a supposed meeting that took place last year, in which they were on the verge of becoming lovers. She doesn’t seem to remember. However, the film suggests that her memory could be faulty.

Everything that is said in the film can be doubted. Reality refuses to be defined. We can’t be sure of anything. So the character development is equally mysterious and frustrating. “Last Year at Marienbad” plays on one’s expectations of what should happen in a regular drama and twists them upside down, leaving us in a peculiar state of distrust for everything depicted in the film.

Both “Last Year at Marienbad” and “L’Avventura” are movies that don’t quite fit into any category. The latter won the Special Jury Prize at the Cannes Film Festival, “for a new movie language and the beauty of its images.” Many regard it as Antonioni’s masterpiece and is considered as a landmark of cinema history by prominent filmmakers and critics alike.

It’s commonly known as the movie in which “nothing happens.” This trait is by design. Antonioni called the film “The Adventure” as an ironic smirk to the audience. There’s absolutely nothing close to adventurous in this movie. Instead, it focuses in the weird relationship between Claudia and Sandro. They hook up after the former’s best friend and the latter’s girlfriend disappears. She vanishes and is nowhere to be found; this forces the two of them to come to terms with their relationship and analyze their lives.

There’s little to no dialogue in the film and the plot I just described is what loosely ties the scenes together. In actuality, there isn’t such a thing as a “plot,” but a series of different bits of reality and common situations that make the characters reflect on their existence.

Its complex storytelling lends itself to infinite interpretations, like all good films do. This way of presenting a film was born from the desire to get as far apart as possible from neorealism’s stark lineal narration. By doing so, Antonioni inspired a whole generation of filmmakers, including Andrei Tarkovsky and Francis Ford Coppola to subvert the narrative norms and achieve a more cinematic way to convey feelings through a movie screen. 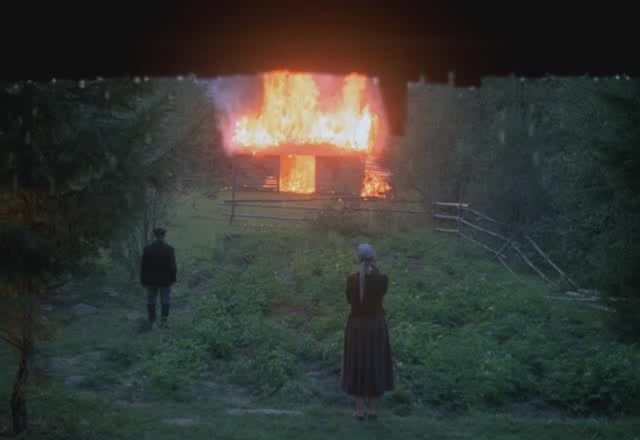 Our subjective experience of the world is what shapes who we are. It’s also the main focus of art. As human beings we’re constantly changing, evolving or devolving, always in motion. To the point that it’s hard to track “who” we really are.

Great artists manage to get us to care about their lives, their obsessions and their worries. In film’s case, they do this by constructing cinematic rides leading to the depths of their souls; an extremely difficult task. Tarkovsky was one of the geniuses capable of such a feat, and it is in “The Mirror” where he’s able to employ those talents to the fullest.

“The Mirror” is an autobiographical movie. Tarkovsky recounts his life following a train of feeling, not thought. The scenes aren’t connected by any sort of plot, but by the dwellings of a nostalgic man. We go from a childhood’s memory to a dream, to an argument with his wife to a story about his mother through a single cut.

Structurally, The Mirror achieves a dreamlike tone, a poetic symphony through a single human’s existence; culminating in an epic reflection about time and mortality.

There really isn’t any other film like “The Mirror.” No other author has been able to capture the magic of existence and how it can be found in the most common of situations, not just in the seemingly more important ones.

All of this historic cinematic journey, along with the philosophical currents that blossomed in the 20th century had to lead somewhere right? The reconceptualization of the human being motivated by the two World Wars, the development of society from mostly rural to mostly urban, all of these facts changed a fundamental part of what it means to be human. This cultural evolution had to be expressed by an incomparable piece of art, right? Well, this is it, folks – “Synecdoche, New York” is that piece of art.

I’ve written an entire article focused on this film and featured it in many other lists, but somehow, I still have things to say about it. And this was by design: Charlie Kaufman has said that his picture is meant to be rewatched several times throughout long stretches of times, so that one could find new things about it. Little hidden details as well as new perspectives due to the fact that we’re always changing as human beings. That’s one of the most important aspects of the movie.

“Synecdoche, New York” tells the story of Caden Cotard (Philip Seymour Hoffman) a theater director frustrated with existence. Nothing quite goes as he wants it to. Both his personal life as his professional life are a mess. He’s unsatisfied, so he strives for better things, with various grades of success.

The absolute realism (as I like to call it) that this film expresses its story through is completely amazing. I’ve never seen a movie so true, so painfully honest about what it means to be human, about how similar we all are.

Much like in “8 ½,” Kaufman manages to completely immerse us in the mind of the main character. We see not only through his eyes, but through his mind’s eye. It’s easy to get lost in a narration so uncommon; I certainly did the first time I watched it, so I recommend multiple viewings to really enjoy “Synecdoche, New York.” And don’t take my word for it – go read Roger Ebert’s review of the picture, it’s better than anything I could ever write.

When I started writing this list, I automatically knew which movie would take the number one spot. “Paprika” is the essential complex film. It deals with dreams. Not the “I wish to wake up one day as Cristiano Ronaldo” kind, but the “I’m afraid of commitment, my hunger for power consumes me and I could kill my whole extended family any day now” one. It does this with multiple characters along many storylines and plot points, in a spectacularly absurd odyssey of breathtaking animation.

The editing emphasizes the film’s insane storytelling that jumps between several people’s dreams and realities. The ingenious cuts and smooth transitions keep the film together and coherent enough so oblivious people like me can understand what’s happening (although it took a few rewatching sessions).

Most interestingly, “Paprika” explores how our personality is expressed through dreams, the only state in which we are completely unfiltered and our unconscious has free reign. The character development achieved through them is amazing, a tool rarely used in cinema in general.

The film also uses dreams to reflect on the nature of cinema, just as “Inception” would later investigate. It amazes how many interpretations, symbolism and implications can arise from the film, which constitutes solid evidence on how amazingly complex it is, taking full advantage of animation to achieve its goal.