The 1980s were an astounding and simply stunning time for cinema. There seems to have been no end to the awe-inspiring visuals that light up living rooms, bijous, drive-ins, and multiplexes the world over during that wonderful decade.

Taste of Cinema’s tireless and exciting search for the most visually exquisite films of 1980s has been no easy charge, though several films stood out straight away. The assembled list presented here offers up films of dazzling depth, stirring symmetry, impeccable production design, gorgeous framing, and assured grace. Enjoy and please feel free to add your suggestions in the comments section below.

Polymath filmmaker Warren Beatty co-wrote (with Trevor Griffiths), produced, and directed this all-encompassing and frequently breathtaking tale on the life, love, and career of American journalist and socialist John Reed (Beatty), the Russian Revolution chronicler behind the 1919 book, “Ten Days That Shook the World.”

Reds journeys first with John to Russia where he documents the Bolshevik Revolution and himself is reborn a revolutionary. Soon his left-wing politics takes him to a married woman named Louise Bryant (Diane Keaton), soon to become not just an activist, but also a celebrated feminist icon. Their love affair and their turbulent lives become muddied as a rift separates John from his ideals and the cold tap of reality.

Louise reluctantly backs away from John and finds distraction in the celebrated and very cynical playwright Eugene O’Neill (Jack Nicholson), and John finds his own trail taking him back to the Motherland as health problems loom.

An engrossing and engaging epic, Reds contains legions which is why it does occasionally ramble and repeat itself, but that’s also what makes it such a bravura romance of ideals, shattered hearts, and stunning vistas. Hollywood films are rarely this ambitious, and love stories, rarely so agonizing and artful.

Bernardo Bertolucci’s sweeping biographical epic about the life of Aisin-Gioro Pu Yi (John Lone), the last emperor of China is accurately described by LA Times critic Sheila Benson to be “as coolly lavish an epic as we may ever see.”

Bertolucci co-wrote the screenplay with Mark Peploe, and the stunningly beautiful tale spans the years 1908 to 1967, beginning with the three-year-old Pu Yi, and we bear witness to the grandeur of this boy king quite quickly as he’s installed in the Forbidden City by the ruthless Empress Tzu-Hsui (Lisa Lu). Pu Yi’s story, told in flashbacks, further details his opulent childhood from prison after the Red Army captures him in 1950. His luxurious upbringing is one wherein he was sheltered from the complex politicking around him, eventually swept up in the revolution that would forever alter China.

Gloriously lensed on location by Bertolucci’s regular cinematographer Vittorio Storaro, The Last Emperor won all nine Academy Awards it was nominated for, including Best Picture and Best Director. It certainly is, as film critic Peg Aloi suggests, “one of the most provocative and stunningly beautiful films of the past 20 years.” 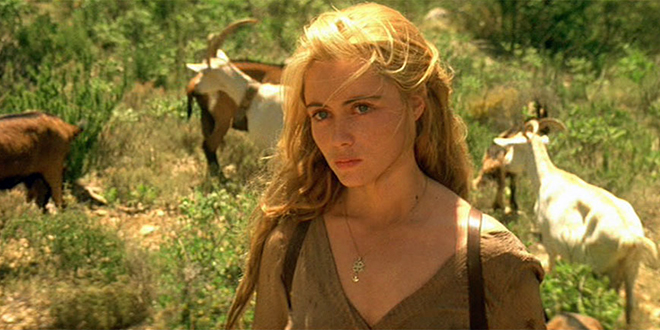 Adapted from Marcel Pagnol’s “Jean de Florette”, a two-volume novel from 1966; the kind of lushly depicted rural romance that lingers long in the mind and heart afterwards.

Manon (Beart), is a somewhat shy shepherdess, determined to solve the mystery behind the death of her father (portrayed by Gerard Depardieu in the previous Jean de Florette film) and to mete out a terrible vengeance on the men responsible. Ugolin (Auteil), is one of the men responsible, and cruel fates, he’s in love with Manon, who is unmoved in her resolve. With murder in her heart for her father’s killer, Manon causes the village’s water supply (the titular “spring”) to diminish, blaming Ugolin and his aptly named co-conspirator Cesar (Montand). Will tragedy touch them all? Of course.

Absorbing, aching, even exquisite, Manon of the Spring is old-fashioned, sure, but it’s also some serious eye-candy that Merchant-Ivory fans are sure to eat up.

The directing/producing team of James Ivory and Ismail Merchant really came into their own and captured the world’s attention with their adaptation of E. M. Foster’s acclaimed 1908 comedy of manners novel “A Room with a View” and the results are a visually rich tapestry of intelligent wit and truly stunning design.

Unfolding at home (England) and abroad (Italy, mostly), an ensemble of Edwardian English upper class romantics at the turn-of-the-century, populate this gentle and poetic picture. And while it’s easy to get lost in the loveliness captured in DP Tony Pierce-Roberts’s expert lens, Jenny Beavan and John Bright’s period costumes (they won Oscars for their efforts), and the sterling art direction (the team under production designers Gianni Quaranta, and Brian Ackland-Snow, including Brian Savegar, and Elio Altamura also received richly deserved Academy Awards), make it all the more easy to get lost in the fully recreated and realized world.

Adding to the attraction of A Room with a View is the ensemble cast, which includes a star-making turn from Helena Bonham Carter as Lucy Honeychurch, and the superb talents of Simon Callow, Denholm Elliott, Judi Dench, Julian Sands, Maggie Smith, and Daniel Day-Lewis (who, as you’d expect, steals all of his scenes).

The quintessential mannered and sublime Merchant-Ivory period picture, A Room with a View is an engagingly lovely work of art that has also aged incredibly well. 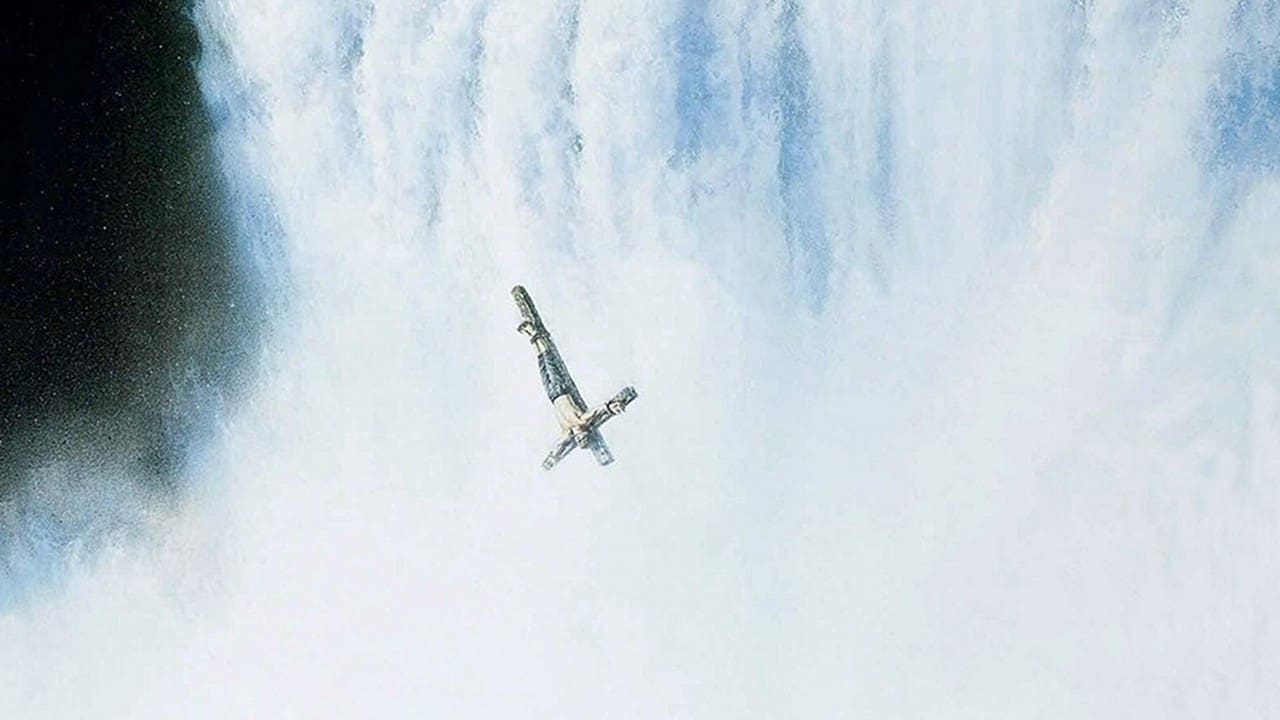 Set in South America during the 18th century, Roland Joffé’s Palme d’Or winner The Mission is a magnificently produced historical epic of ruthless European conquest and the experiences of Jesuit missionaries in the Americas. It may have some similarities to other jungle epics (Aguirre, the Wrath of God [1972] springs to mind and is a superior film), but the atmospheric artistry on display is undeniable.

While there are some problematic aspects to the film (it kinda sorta morphs into a strange buddy picture), it’s very obviously Joffé’s passion project, and it’s a beauty to behold. Of course Robert De Niro and Jeremy Irons are excellent (other standouts in the cast include Cherie Lunghi, Liam Neeson, and Aidan Quinn), the real star here is cinematographer Chris Menges –– he received the Academy Award for Best Cinematography for his fine efforts.

Father Gabriel (Irons) is a Jesuit priest who has entered the Guarani lands in South America in the 1740s with the misguided goal of converting the natives to Christianity. Soon Gabriel has built a mission and is joined by Rodrigo Mendoza (De Niro), a former slave trader in need of redemption.

After a treaty transfers the land from the Spanish to the Portuguese, the Portuguese government ruthlessly decides it wants to capture the natives for slave labor. Before you can say “not here you don’t”, Mendoza and Gabriel are defending the mission, even though they are repeatedly at odds.

The exotic locations (which includes stunning vistas throughout Argentina, Brazil, Colombia, and Paraguay) and Ennio Morricone’s evocative score, help elevate The Mission into the upper echelon of vivid religious cinema. 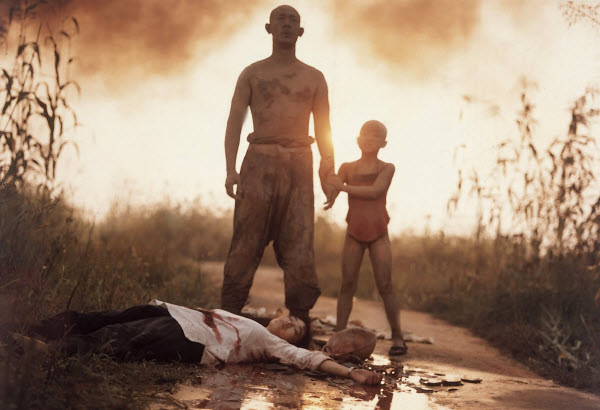 Dominated by a rich and intense use of colors (props to cinematographer Gu Changwei), Red Sorghum was the directorial debut of Zhang Yimou (Raise the Red Lantern [1991], Hero [2002], House of Flying Daggers [2004]) and the acting debut of Gong Li, and would be the first of many collaborations between the two.

Zhang and Gong would find international acclaim via this lush, lusty, and lasting portrayal of peasant life –– the film is based on Nobel laureate Mo Yan’s 1986 novel “Red Sorghum Clan” –– which netted the Golden Bear at the 38th Berlin International Film Festival, among numerous other international awards.

Surely part of what makes Red Sorghum such an astonishing and eye-catching work stems from Zhang’s background as a cinematographer, his closeness with Gu in this regard, as well as the controversial aspects to the tale (the heroine’s lurid, even lecherous lifestyle was heretofore unseen in Chinese film) make it more than rememberable and subversive.

Roger Ebert, one of many critics who fawned over the film, wrote that “…there is a strength in the simplicity of this story, in the almost fairy-tale quality of its images, and the shocking suddenness of its violence, that Hollywood in its sophistication has lost.” Such startled praise also came from the Washington Post’s Desson Thomson who suggested that “if [Zhang Yimou’s] debut were any better, he’d have to be tested for artistic steroids.”