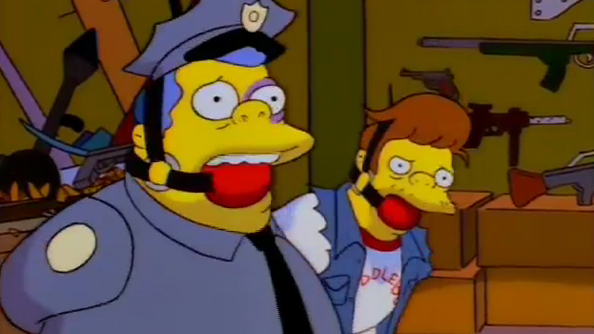 Since the very first episode, Simpsons Roasting on a Open Fire, screened on the 17th December 1989, The Simpsons has become one of the most iconic television families ever conceived.

For nearly 30 years, the show, created by animator Matt Groening, has given the world over 28 seasons and 618 episodes of a show that has become a pop culture masterpiece. Dozens of talented writers, animators and filmmakers have passed through, leaving their imprint of the series including Academy Award Brad Bird and talk show host Conan O’Brian. While dedicated fans may argue that the series has declined in quality over the years, the impact the show has had on the world is profound.

But what has kept The Simpsons going for 30 years?

There are multiple reasons for the show’s success. It was well written, humorous and, of course, plenty of memorable lines to quote, guaranteeing at least one annoying friend who could fit in a Simpson’s quote into nearly every conversation.

Led by patriarch Homer Simpson, a lazy, abusive alcoholic, with his long suffering wife, Marge, and their three children: the delinquent Bart, the intellectual Lisa and baby Maggie. The Simpsons were as unconventional as they come, yet audiences could not get enough of them. Despite disdain by moral crusaders (including US President George H.W. Bush), audiences could relate to the family because, while they were not perfect, they loved each other.

Another key to the show’s success, however, are the references. For thirty years, the show has had a vast array of social and pop culture references to draw from. These references stretched from real life to the cultural. From music to art, video games to mythology, television to cartoons and, of course, film. The Simpsons has referenced dozens of movies, ranging from the earliest classics of cinema to contemporary favourites. 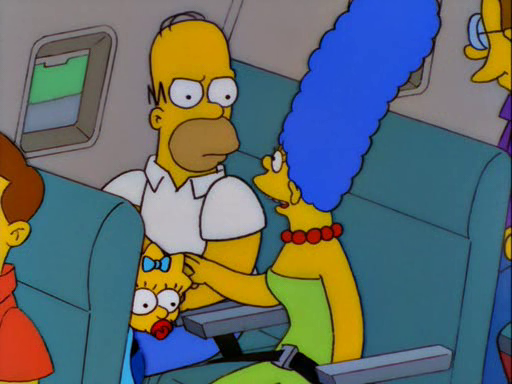 Sometimes the best references are the simplest. Many references in the show evoke nostalgia through imagery and direct quotes. However, at times, The Simpsons can make light of its references through subtle humour.

In Thirty Minutes Over Tokyo, The Simpsons seek a discount holiday and inadvertently find themselves on a flight to Japan, much to the joy of the whole family, with one exception: “C’mon Homer,” says Marge enthusiastically, “Japan will be fun. You like Rashomon.”

“That’s not the way I remember it,” says Homer sulking.

It may seem like a off the cuff remark, perfectly representing Homer’s stubbornness, but any true fan of cinema would love the subtle humour referencing Rashomon’s fractured storytelling. Film auteur Akira Kurosawa’s 1950 classic may have been an artistic statement about how unreliable memory is, but it was perfectly appropriated for the character of Homer Simpson. 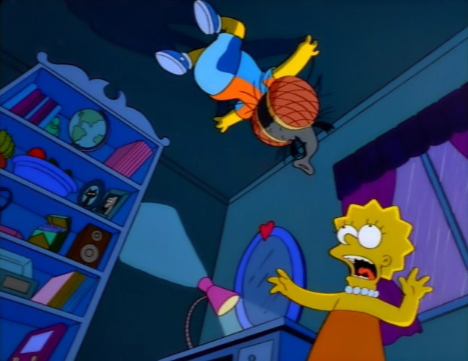 The Treehouse of Horror episodes have always been a staple of The Simpsons since the first segment appeared in Season 2 on the 25th October 1990 where Bart and Lisa sat in a Treehouse, telling each other scary stories on Halloween. Since then, one Treehouse of Horror episode has appeared in every season of The Simpsons, generally at the end of October. These episodes have quickly become popular for their constant references to horror, sci-fi and myth.

Many film reference stand out, but one of the best is still the segment dedicated to the original 1958 cult classic horror film The Fly. While this episode was released barely a decade after the Jeff Goldblum/David Cronenberg hit, the show still decided to reference the original, including Bart swapping heads with a fly (disappointed that he did not become a half man/half fly superhero).

The segment has its moments. The sight of the half-cat/half dog creature is familiar, but the sight of a creature made up of the tail ends of both is rare, “You can be Lisa’s,” Bart groans. Ultimately, the point of the film is subverted when Homer, appearing to want to destroy the transporter machine that caused Bart’s mutation with an axe, instead decides to chase him around the house with said implement. 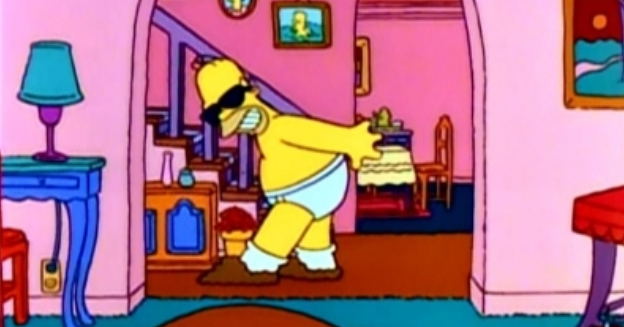 Ask anyone about the movie Risky Business and the answers can vary. Some may know that it was one of Tom Cruise’s earliest performances. Others may know the basic outline of the film. But everyone knows that scene. The iconic moment when Cruise, dressed in only a pink shirt and white socks, slides across the hallway before dancing and singing to Bob Seger’s Old Time Rock and Roll.

Even those that have never seen the film will recognise this scene, a compliment to Tom Cruise’s star power. Something so iconic was clearly too irresistible for The Simpsons when Homer, dressed in white briefs, sunglasses and a pair of bear-like slippers, repeats the iconic moment, dancing instead to Who Wears Short Shorts by The Royal Teens.

The entire episode is framed around Homer’s antics after he refuses to go to Church, leaving him at home by himself. This could have been shown in any number of ways but the inclusion of a reference to Risky Business is a delightful method to elicit laughs. 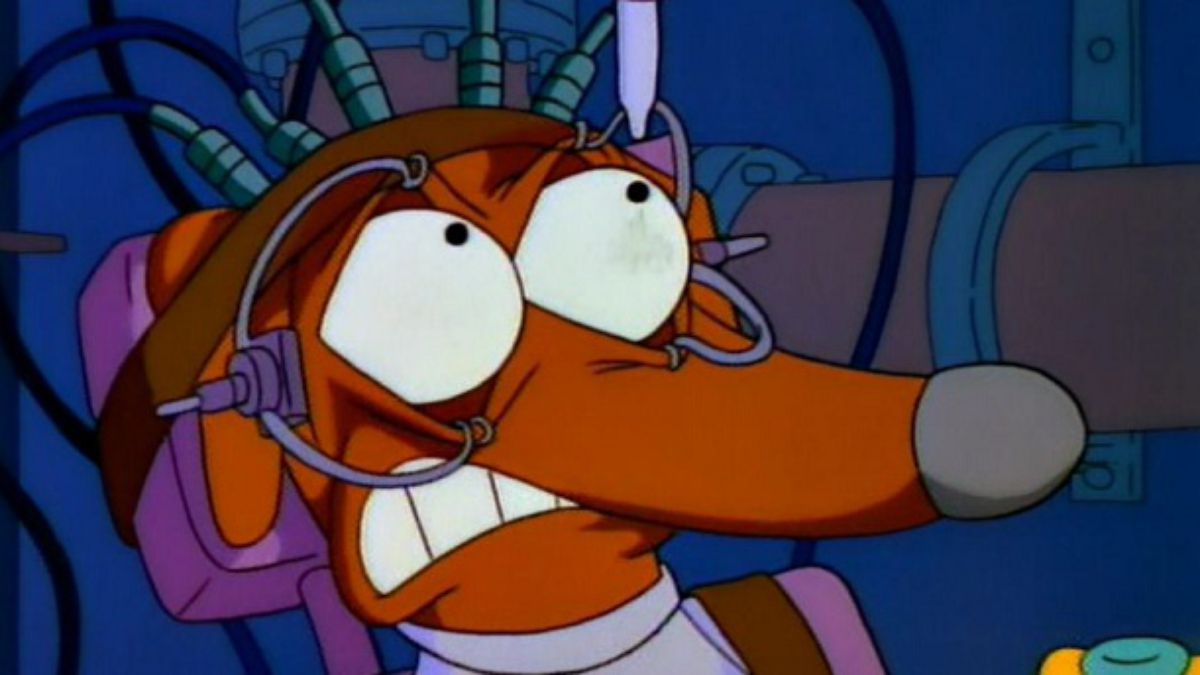 The Simpsons have always loved a good Stanley Kubrick reference. From The Shining to Full Metal Jacket, 2001: A Space Odyssey to Dr Strangelove and, of course, A Clockwork Orange.

Again, even those who have not seen the film would recognise several key features of the Kubrick classic. The bizarre costumes of Alex and his ‘droogs’, acts of violence mixed with Singin’ in the Rain, of course, the iconic yet disturbing image of Alex being brainwashed, his eyes wedged open, where he is forced to watch films depicting act of violence and sex to the music of Beethoven.

But even something as disturbing as that is not off limits to The Simpsons with Mr Burns using the exact same technique to brainwash the innocent and loveable Santa’s Little Helper into becoming his next attack dog. 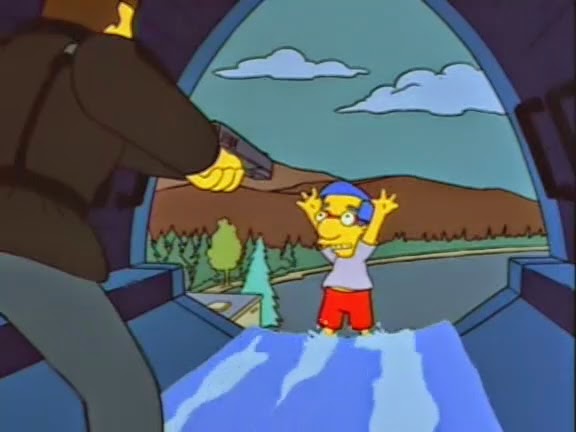 Possibly one of the most random film references in the history of The Simpsons. While the episode focuses on Lisa’s relationship with another student who is equally, if not more, talented than her, a recurring joke throughout the show is directed towards Milhouse.

“Maybe I can dig up some dirt on Alison. Remember when I got Milhouse on America’s Most Wanted?” says Bart as a pair of FBI agents identifies Milhouse and pursue him across the playground. The jokes are random and absurdist in nature, never fully explained, but all that comes to fruition later in the episode when Bart talks about, “Tipping off the Fed about our good friend Milhouse.”

Standing at the end of a storm water drain, overlooking a dam, Milhouse pleads at gunpoint, “I swear, I didn’t do it.” The man with the gun does not pause, “I don’t care.”

This episode aired barely a year after the release of The Fugitive, making it a highly relevant reference, especially after Tommy Lee Jones won the Academy Award for Best Supporting Actor. However, over 20 years later and this reference has not only stayed relevant, it has remained a fan favourite. 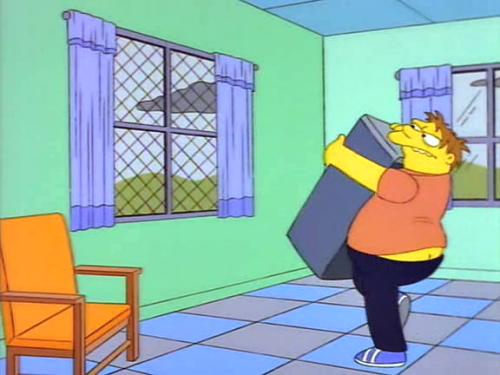 Barney’s presence throughout the show has always been a mixture of the tragedy and the comedy. On one end, his constant belching, slurred speech and idiot behaviour (including sculling a tin of varnish after denouncing Boxing as causing brain damage) is a constant source of humour. But, on the other end, he is a reminder of the impact that alcoholism can have on an individual.

At one point, Barney was on his way to Harvard before being introduced to alcohol by Homer. He has poured his heart out in a short film (A Star is Burns) and his attempts to go sober (Deep Space Homer, Days of Wine and Doh’ses) have revealed a gentle soul eager to prove himself to the world.

In So It’s Come to This, A Simpson’s Clip Show, we witness the funnier side of Barney’s alcohol dependency. After Bart pulls a prank involving beer that leaves him in the hospital, Homer is unable to drink, traumatised by the experience. Barney, unable to witness his friend’s ‘suffering’, proceed to smother Homer with a pillow and escape out the hospital window with a water fountain. Watching in amusement, Moe mutters to Homer, “He really needs to find a girlfriend.” 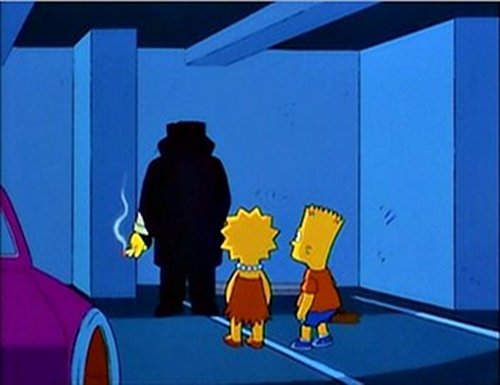 Despite appearing as a non-speaking character, Sideshow Bob made his first major appearance in ‘Krusty Gets Busted’, voiced by acclaimed thespian Kelsey Grammer. Since then, Sideshow Bob has become a fan favourite, frequently making returns to try and exact revenge on Bart and his family for exposing his crimes.

After several attempts, Bob finds himself back in prison only to inadvertently receive the support of a conservative radio host who convinces his fellow Republicans to run Bob as mayor against the inept Mayor Quimby. While winning soundly with 99% of the votes, Bart and Lisa investigate any possibility of voter fraud. Initially hopeless, the pair receives help from an anonymous source.

Meeting in a abandoned car park in the middle of the night, Bart and Lisa confront the silhouette figure hiding in the shadows, the only source of light being his cigarette. He offers them information and refuses to give up his identity…only to have the mystique ruined by Homer who immediately turns on his headlights, yelling out to Mr. Smithers.

While the scene is a clever reference to Woodward and Bernstein’s meeting with Deep Throat in All the President’s Men, the scene also stood as a profound moment for the character of Waylon Smithers. When asked by Bart and Lisa why he betrayed Mr Burns (a member of the Republican Party), Smithers admits that Sideshow Bob’s conservative policies go against his “choice of lifestyle”. This was the first direct reference to Smithers’ sexuality.