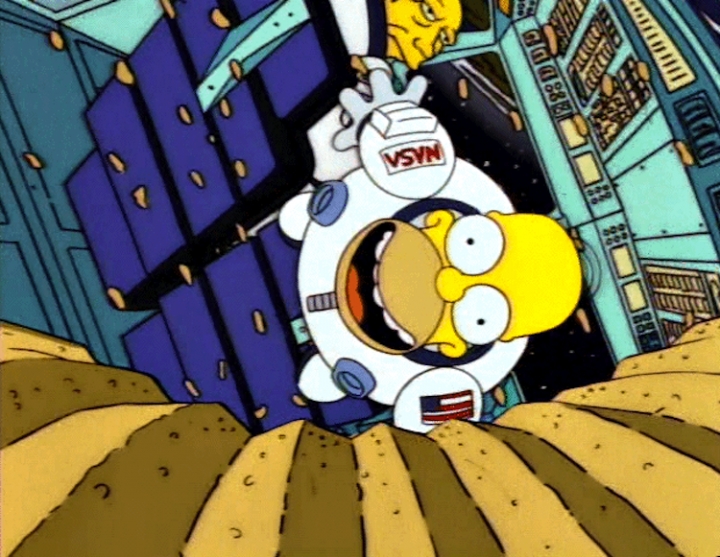 Deep Space Homer is an episode already packed with movie references. From subtle nods to The Right Stuff to Homer’s emotional breakdown over finally figuring out the twist to Planet of the Apes and even to a reference to the Chestburster scene from Alien, the episode has crammed as many space and sci-fi references as possible. However, the one reference that stands out is Stanley Kubrick’s classic, 2001: A Space Odyssey.

While in space, Homer, in his infinite wisdom, opens a bag of chips causing it to explode. “I’ll handle this,” he says, floating through the cabin of the ship, chomping through the floating crisps, all to the rhythm of The Blue Danube. This alone would be the perfect reference to Kubrick’s classic and the docking scene. But then the episode one-ups itself in the finale with Bart tossing a marker in the air and, as it flies through the air in slow motion, makes a match cut with a satellite crashing onto Homer’s head.

Both of these references not only manage to capture the magic of Kubrick’s greatest moments, but also the greatest moments of cinema in a way that compliments the iconography of The Simpsons. 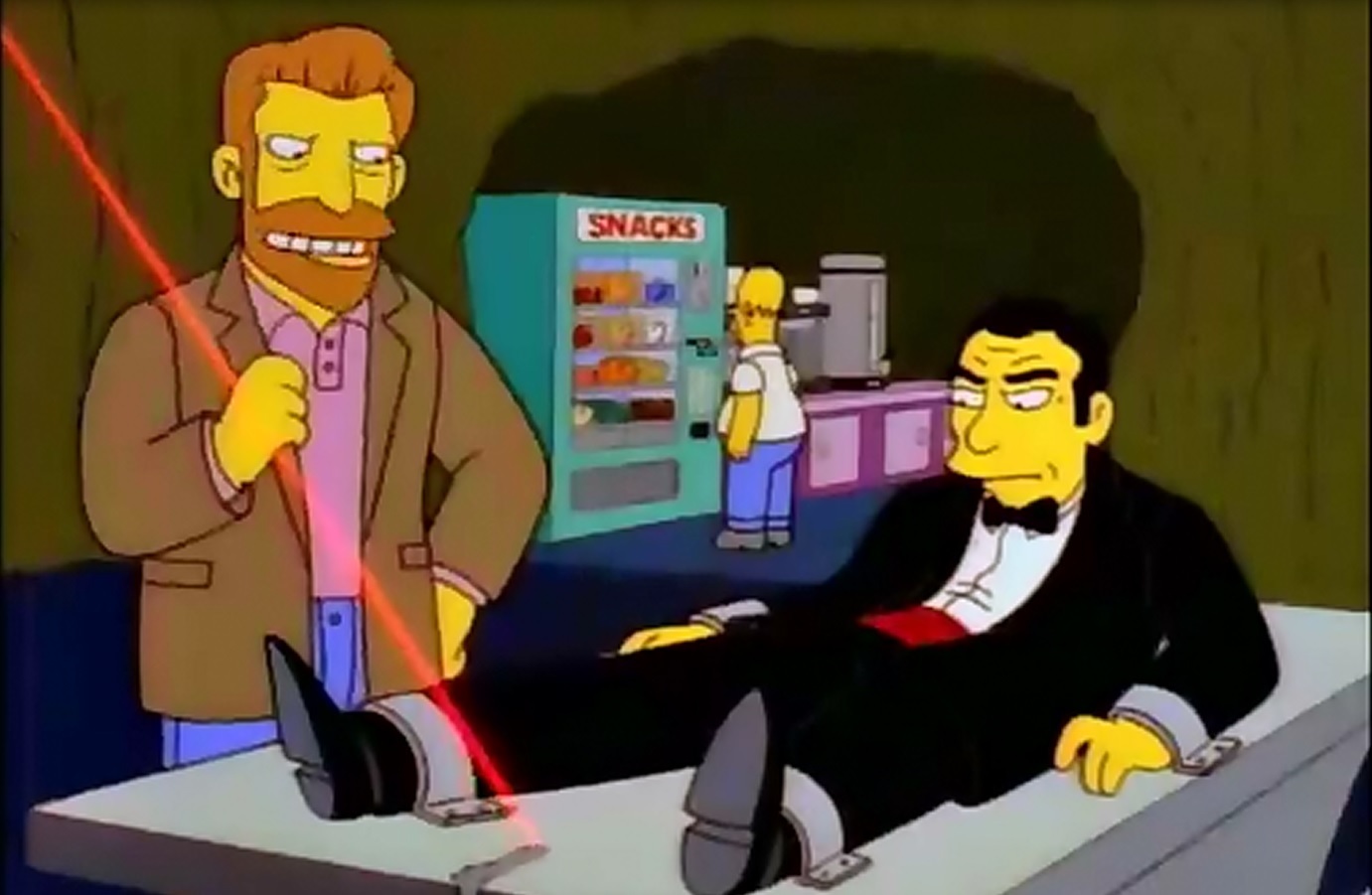 The image is recognisable to anyone. From the most dedicated James Bond fan to the biggest novice, the sight of 007 strapped to a table while a laser slowly creeps towards his body is iconic. “Scorpio, you’re mad!” he says before using a coin to reflect the path of the laser onto his restraints and escaping…only to be tackled by Homer Simpson.

You Only Live Twice is a obvious homage to James Bond as a whole with frequent references made to the series through Homer’s new boss, Hank Scorpio. To Homer, Hank is the perfect boss. He is kind, passionate and respectful, something absent from his previous job. Yet under this guise of the perfect boss, Hank is in fact a supervillain, threatening to take over the East Coast of the United States with a doomsday device. Even as the military storms the headquarters of the Globex Corporation, Homer remains oblivious to his boss’ actions.

However, the Goldfinger moment remains one of the episode’s highlights as well as one of the best Bond references ever. Many fans even forget that Bond’s escape in the original film was quite anti-climatic with 007 talking his way out of the situation as opposed to a ingenious escape as depicted in the episode. Still, this moment perfectly depicts Homer in all of his oblivious glory, especially as he is led away by a thankful Hank before his henchmen execute a unconscious Bond. 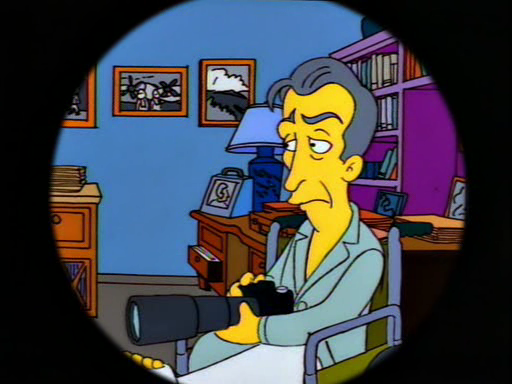 Leave it to The Simpsons to make murder and matricide hilarious. When Bart happens upon a scream and the sight of Ned Flanders exclaiming, “I killed her!” before closing the curtains, it was easy for Simpson’s fans to ask a shocking question: did Ned Flanders murder his wife?

This question plagues the second half of Bart of Darkness where Bart, confined to his bedroom with a broken leg, plays LB Jefferies and asks Lisa to search for evidence in the Flander’s home while he watches through a telescope. The episode even has another wheelchair bound voyeur spying on Bart through his camera and telescopic lens.

Bart of Darkness even takes a dark turn with the sight of a sinister looking Ned Flanders carrying a fire axe and singing Mary had a Little Lamb put fans on edge as danger approached a hiding Lisa. Of course the writers eventually revealed that Maude Flanders is still alive and everything that Bart heard and saw could easily be explained as innocent. For a moment, it seemed like The Simpsons was about to take a dark and series changing turn before returning to normality, something that even the writer’s acknowledged with Homer sarcastically exclaiming, “Good to see everything is wrapped up in a tight little package.” 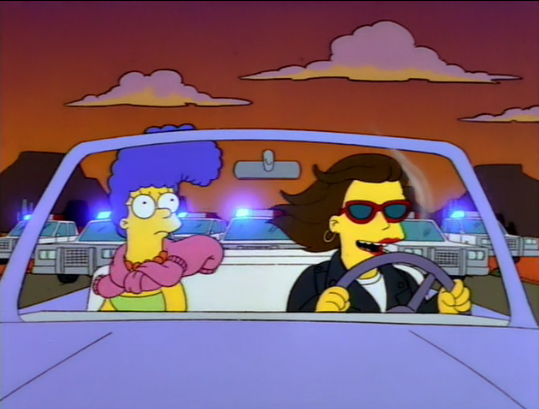 Marge Simpsons has always been one of the most underappreciated characters out of the entire family. Usually relegated to a voice of reason, Marge is frequently accused by the family of being a wet blanket. However, as the series progressed, Marge’s status as the long-suffering wife and mother of the family was quickly established. She became a deeper character whose frustrations and aspirations were established, none so more than in Marge on the Lam.

Bonding with neighbour Ruth Powers after Homer failed to accompany her to the ballet, Marge decides to spend a night out on the town with her new friend, only to learn that Ruth is armed and has stolen her ex-husband’s car after he failed to pay child support, leading the pair on a high speed pursuit with the police. Despite being given the opportunity to escape, Marge elects to stay with Ruth regardless of her actions.

It is hard to miss the obvious references to the 1991 classic. Same car, same characters, same setting and even the same conclusion. This, however, is not just a casual reference to a popular movie, but instead the perfect way to build upon the character of Marge. Her decision to stay with Ruth, despite the dangers, perfectly illustrates her loyal nature. The people she surrounds herself with, including Ruth and Homer, may be imperfect but she sees the good in everyone, making her decision to stay with Homer throughout the series not only believable, but all the more touching. 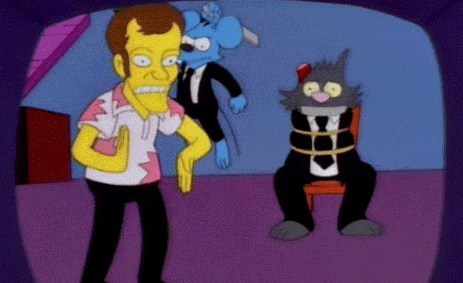 While the entire episode is a homage to Mary Poppins, including a flying British nanny named Shary Bobbins and numerous musical references, the shows real highlight for cinema lovers is the quick Reservoir Dogs reference seen in the Itchy & Scratchy cartoon at the start of the episode.

The Itchy & Scratchy show has become a hallmark for The Simpsons and is praised for its depiction of violence on TV. The cat and mouse duo share the same antagonistic relationship as Tom & Jerry, Sylvester and Tweety, Wile E. Coyote and The Roadrunner and Bugs Bunny and Elma Fudd, with one of the characters frequently the victim of a failed scheme. In the case of Itchy & Scratchy, story is frequently sacrificed for ultra violence with Scratchy always the victim of a gruesome death at the hands of Itchy.

Depicting the infamous ear cutting scene from Reservoir Dogs, the scene is promptly interrupted by ‘guest director’ Quentin Tarantino (who turned down a cameo) who tries to explain his use of violence in his work before a frustrated Itchy decapitates Tarantino with a straight razor. Accusations of tasteless violence have followed Tarantino’s career since the very beginning and perhaps this reference was perfect for a show as tasteless and violent as Itchy & Scratchy. 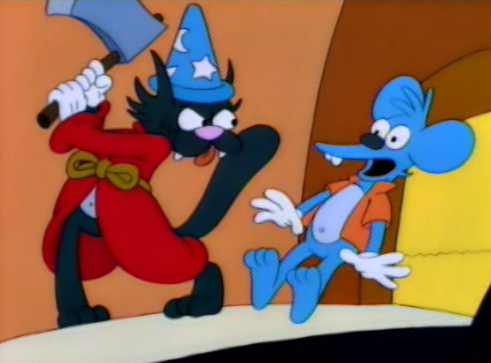 While the episode is structured to the likes of Westworld and Jurassic Park with a robot uprising occurring in the park, the real gem reference throughout Itchy & Scratchy Land is not just Fantasia, but the product of Disney as a whole.

While the cartoon cat and mouse may find inspiration from multiple sources, clearly Disneyland inspired the inclusion of a exclusive theme park. Throughout the episode, the writers take shots at the brand including merchandising (with the failed sidekicks and the fan favourite Bort licence plates), Walt Disney’s anti-Semitism (seen with the cartoon ‘Nazi Supermen are our Superiors’) and Disney films with Bart and Lisa watching ‘Scratchtasia’, a obvious reference to Fantasia.

Perhaps what is so striking about this is Bart and Lisa’s own complacency with the pair watching multiple violent cartoons, prompting Lisa to ask, “I wonder if watching this type of violence does de-sensitise us?” just as a malfunctioning Scratchy robot breaks into the room, decapitating itself and ejecting blood all over the emotionless Bart and Lisa who decide to get a snow cone. 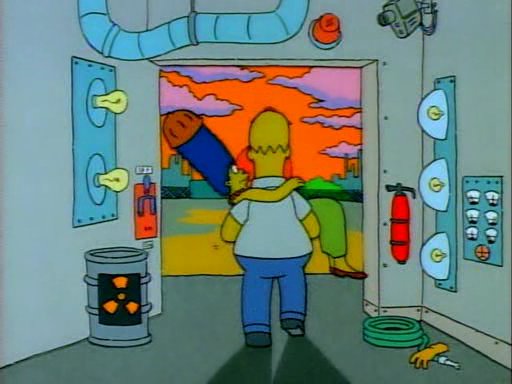 Homer and Marge’s marriage constantly has its ups and downs. A frequent source of conflict throughout the series is Homer’s selfish and inconsiderate behaviour that prompts an angry response from Marge. In Life on the Fast Lane, this behaviour creates a schism between the two that puts their marriage at risk for the first time in the show.

After buying Marge a bowling ball for her birthday, despite the fact that she has never bowled and hinting that he may want it, Marge furiously and stubbornly elects to take her ball (engraved with Homer’s name in it) down to the Bowling alley to practice by herself. There she meets bowling instructor Jacques who offers to train her and even invites her back to his apartment.

Marge eventually arrives at a literal fork in the road, either heading to Jacques’ apartment or to meet Homer at the nuclear power plant. Finally choosing Homer, she surprises him at work and the pair leaves together to the tune of Up Where We Belong. A touching reference that reinforces the love between Homer and Marge they may falter but ultimately never failed.