Under all forms of art, cinema is the supreme discipline, simply because it’s the combination of all of them. A good movie offers a complex structure, a dense web of all layers working seamlessly with each other. In a sense, it reflects the functioning of the human psyche. Therefore, cinema is the ideal form to thematize psychological issues.

A core characteristic of cinematic storytelling is as such – ordinariness is boring. Unforeseen events and abnormalities are the origin of the audience’s interest. There are few genres that rest on this idea like the following one. In cinema history, one genre in particular stands out with its illustration of psychological perversions – the thriller.

Back in 2010, “Shutter Island” was one of the most talked-about movies of the year. Regarding the film’s prominent ensemble behind and in front of the camera with Leonardo DiCaprio and Martin Scorsese, the movie’s huge media response didn’t surprise. But aside from this, the adaption of the eponymous 2003 novel by Dennis Lehane is a well-composed thriller with a lot of psychological depth.

In order to solve the ominous disappearance of one of the inmates, US Marshal Teddy Daniels and his partner arrive on Shutter Island, which houses a hospital for criminals with mental disorders. Through the narrative process, the psychological dysfunction of the island’s residents seems to have a noxious influence on Daniels. He has to face concealed regions of his mind and his past.

“Shutter Island” is a movie with a lot of symbolic details and metaphoric hints, making the movie much more than an one-view blockbuster. The narrative offers some decent but interesting parallels to David Fincher’s “Fight Club” (in fact, “Shutter Island” is a Fincher-narrative par excellence).

With several viewings, it’s interesting how the spectator is put into the position of the Marshal in order to search for references to the movie’s culminating exposure. Bearing the movie’s climax in mind, think about Daniels’ notorious aversion against water. At the movie’s beginning, he has to fight seasickness and while interviewing a patient he suppresses the glass of water in her hand (the latter is often wrongly criticized as a continuity mistake).

“Shutter Island” is a prime example of immersive perspective in cinematic storytelling. For the full 138 minutes of the film, the audience is set in the protagonist’s position both in the narrative and in the audiovisual layer. There’s no moment where Daniels isn’t in the center of the scene. Remember the opening scene’s shot where Daniels looks into the mirror. This angle works as the film’s perfect opening, placing the audience into the mirror, looking directly through the protagonist’s eyes. 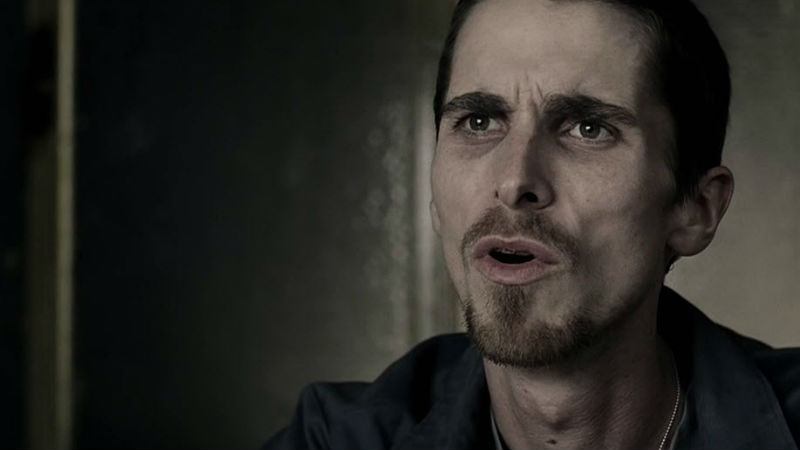 Haunted by insomnia, machinist Trevor Reznik suffers from extreme weight loss and social isolation, disregarding the visits of a prostitute and his coffee breaks at a diner, where he meets the waitress, Marie. After a terrible accident in the machine factory, he falls out of favor with his colleagues and his life definitely goes to pieces. Even the meetings with Marie and her son couldn’t keep him grounded. Instead, he has to face a terrifying memory that was deeply buried in his realm of subconsciousness.

This movie is a prime example of illustrating a character’s psychological and physical decay. Bale’s performance is mesmerizing and he gives his character that needed depth. His extremely peaked body is simultaneously fascinating and repulsive, and his character walks on the sharp edge between being deplorable and dubious. It’s this sophisticated contrast that makes Reznik a compelling and unreliable protagonist.

The screenplay is a well-working example of a stripped-down thriller without losing itself in numerous storylines or unnecessary explanations. The climax deserves a separate mention for working as the movie’s perfect conclusion. For one, it frames the whole story with its connection to the thriller’s beginning; then again, it offers a surprising exposure, being absolutely coherent to the remaining narrative.

The film has a very distinct aesthetic. The color palette is dominated by dark and oily tones, giving the movie a highly morbid look on the same level as the protagonist’s health. “The Machinist” is the kind of thriller that connects all cinematic layers in a well-balanced manner, while remaining present in the viewer’s head for days after watching.

8. The Girl With The Dragon Tattoo (Niels Arden Oplev)

Scandinavia is a prime exporter of terrifying thrillers, both in literature and cinema. It might be because of the sinister landscapes and the long-lasting darkness, giving the evil a fertile breeding ground. Posthumously released, Stieg Larsson’s Millennium trilogy might be the best-known achievement of Scandinavian thrillers with a total number of four film adaptations (an original trilogy and an US adaption by David Fincher in 2011).

Decades after the incident, journalist Mikael Blomkvist helps a well-heeled manufacturer solve the mysterious disappearance of his niece. During his investigations, he has to face the repudiative and suspicious attitude of the businessman’s clan, and the help of curious hacker Lisbeth Salander (brilliantly embodied by Noomi Rapace). Their researches lead into dark abysses of the superficially harmonic bourgeoisie and unearth the presence of evil in the clan’s bloodline.

In the manner of many Scandinavian thrillers, “The Girl With The Dragon Tattoo” stands out because of its uncompromising style. Some scenes come up with a huge level of sobriety, resulting in a state of terrifying conceivability (the rape scene in particular deserves a separate mention). At its core, the movie thematizes issues like sexual perversions, fascism, and misogyny and its alarming proximity to civic classes.

The movie is an excellent reminiscences to golden thrillers like “The Silence of the Lambs” or “Se7en”, while offering its own trademark and 146 minutes full of nail-biting tension, haunting environments, and well-thought characters.

“Nocturnal Animals”, directed by by Tom Ford, is one of the most interesting thrillers of 2016. After receiving an ominous manuscript by her former husband, gallery owner Susan escapes her loveless and cold-hearted marriage and gets roped into the sinister narrative. Through the book’s progress, Susan is confronted with mind-penetrating metaphors for her own life, building bridges between her past and the present.

The film is a psychological thriller at its core. Its narrative illustrates the relationship between the protagonist and her former husband in a highly metaphorical manner, with every detail functioning as an allegory. Keeping that in mind, the viewer could identify a huge number of elaborated symbolics (just think about the red couch as the place of the couple’s breakup in reality, and the place where the woman’s dead bodies were found in the script). That’s one reason why the film is predestined for multiple viewings.

Aside from that, the movie is proof of Ford’s qualities and tastes as a designer. The production design is a distinct mélange of haute couture (especially the reality with Susan’s gallery and her luxury home) and dirt (the dusty and rough desert with the event’s brutality).

“Nocturnal Animals” is proof of David Lynch’s huge influence on modern thrillers and surrealistic film aesthetics. From the endless highway in the nighty desert, to the double-identities, to the naked-dancing corpulent ladies, to the illustration of psychosexuality and human abysses, everything seems to be directly linked to Lynch’s unmistakable oeuvre.

“Black Swan” is set in the New York City ballet milieu and tells the story of ballerina Nina Sayers, who yearns for the lead role in the new production of Tchaikovsky’s “Swan Lake”, a double role containing the black and the white swan. Encouraged by her mother’s mediocrity, she focuses on her art with her every cell. Through her progression, she is faced with her own mentally ill mind, alternating between the two antithetic roles.

Darren Aronofsky’s films are always characterized by sinister elements and a dark aesthetic. “Black Swan” is no exception, and it might be one of his most in-depth narrations of a mentally pressured character. The obsession for her art starts to transform into a self-destructive force, endangering her physical and mental health.

The permanent coexistence of black and white in nearly every one of the movie’s scenes works as metaphorical illustration of Sayers’ bipolarity (from the set design to the costumes or the lighting, everything is charged with well-thought symbolism). Natalie Portman’s character is full of dichotomy; innocence and sexuality, good and evil, accuracy and impulsivity. All these features result in a highly complex character, making it all the more important to create access for the viewer.

As already mentioned in context of “Shutter Island”, the quality of psychological thrillers has much to do with perspective and the way the audience can identify with the character’s situation. For movies that illustrate the protagonist’s descent into madness, “Black Swan” is a brilliant example of that, and it is of prime importance.

The cinematographic work of Matthew Libatique and its subjectivity are main factors for the successful transfer of the character’s point of view. His use of handheld shots that gain more and more shakiness through the movie’s progress perfectly illustrates the character arc, while arranging a steady increase of tension.