Films are seen by most as nothing more than a mere form of entertainment, a method to kill a lazy Sunday afternoon or many a sleepless night. Films are also considered by some to be a form of art, a meticulous reality crafted by an individual for audiences to immerse themselves in, taking in theme, culture and personality.

Whichever way you choose to appreciate film, it’s still, at the end of the day, a form of temporary escapism, with emphasis on the word “temporary”. The films on this list offer just that, but instead of giving a “temporary” escape, they give a lasting one, with their runtimes almost doubling that of regular features. They take this extended time to not only craft out an entire world, ensuring every detail is properly explored, but also to exhaust whatever themes they attempt to convey.

The added twist to this list is that the films are all released in the 21st century. In an era where audiences scorn at the thought of films with mere 150-minute runtimes, these films defy such norms with runtimes far exceeding that.

These films are not only powerful works of art, but surprisingly effective opuses of entertainment, not once do the films listed here feel boring. Thus, if you have an entire afternoon to spare, do put on one of these films and prepare to get drained, emotionally and physically, because the experiences they give is unlike any other. Without further ado, these are the top 10 movies with long runtimes.

The most mainstream film on this list and also the one furthest from the “arthouse”, Peter Jackson’s LOTR Trilogy redefined what it means to create a world of fantasy with this epic saga of film that could quite frankly all be absorbed by the masses in one sitting. The Return of the King is the monumental conclusion to the iconic trilogy, perfectly resolving every plot and subplot of the film in most satisfying way possible.

Every film in The Lord of the Rings trilogy, especially the Return of the King, has so much to offer, following a huge ensemble cast of characters on their different adventures, which all eventually lead to the same, grandiose conclusion in this film.

Though Star Wars arguably created the whole idea of a movie franchise, Lord of the Rings perfected it. Almost every major franchise like Pirates of the Caribbean, Harry Potter, X-Men, even Jackson’s own Hobbit Trilogy, all owe some form of success to Lord of the Rings.

Despite the fact that one cannot view and truly appreciate The Return of the King without first seeing the preceding two films, The Return of the King still earns a deserving spot on this list not only because of its quality in relation to the trilogy or its impact on cinema, but the fact that the film still manages to be endlessly rewatchable despite the 3h 20min long runtime, a figure which triples if you count the other two films in the series. The very fact that mainstream audiences still binge the entire trilogy from time to time is more than one can say for the other films on this list.

Who would have ever thought that a character study film based on true story revolving around stock brokers on Wall Street would be filled with so much action, sex and comedy that the film’s 3-hour runtime would quickly breeze past.

For a director over 70 years of age, the amount of pure energy exuding from Wolf of Wall Street is unbelievable, and considering the fact that Scorsese has long been known as director of crime and gangster films, this marks his first major foray in the world of comedy, and what an absolute rollercoaster at that.

From start to finish, the sex-fueled, drug-induced world of debauchery Jordon Belfort and his contemporaries resides in, constantly bombards audiences with unrelenting situations, increasingly ridiculous to the point where even the most simple-minded question the film’s validity as being a medium adapted from non-fiction.

Amidst the seemingly “dumb fun” the film presents itself to mainstream audiences, the Wolf of Wall Street manages to provide thought-provoking statements on the idea of excess, a concept not really explored much in the history of cinema. Contrary to what critics might claim, this is not a film that by any means glorifies the whole idea of debauchery, it instead, within 3 hours, depicts the rise and fall, the glamourous and the hideous, the lies and deceit of Belfort’s endeavors and it lets us decide for ourselves whether to vilify or glorify Jordan Belfort.

The very fact that most people either see it as a film with an inherently bad message or just plain “dumb fun” proves the effectiveness of Scorsese’s intention. Despite what we want to believe, we are as blind and misguided by Belfort’s followers in the film’s epilogue, blinded by the hypnotic, grandiose decadence of excess. 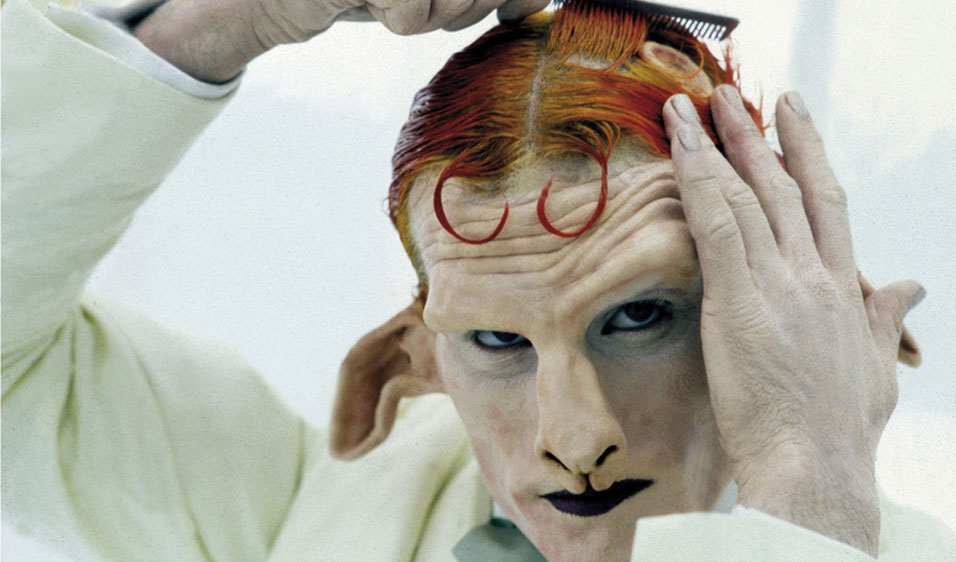 Despite being an instalment to a whole series of films, Cremaster 3 is no Return of the King. In fact, it’s literally on the other end of the spectrum, being as “artsy” as an arthouse film can be, to the point where even something as insignificant as DVD distribution is given as much experimentation as any other aspect of the series.

Cremaster 3, despite being arguably envisioned as the third film in the series, is actually the final film released in the 5-part series, as Matthew Barney, the project’s creator, intended to unveil the films in increasing order of production value, with Cremaster 3’s 3-hour runtime and distinctly better production value truly reflecting this.

Analyzing Cremaster 3, or any Cremaster film in general, is a daunting task, the themes the series explore are beyond complex in terms of its presentation, coupled with constant allusions to world mythology and history, and brought to screen with surreal, almost Dadaist imagery makes for a difficult, but undeniably unique cinematic experience.

A very brief summary and interpretation of Cremaster 3 is a film exploring narcissism, among other themes and ideals, revolving around a dramatized construction of the Chrysler building intertwined with re-imaginings of other historical events. The use of the word “dramatized” because it honestly is a massive understatement.

The way the film’s disjointed narrative is presented to the audience almost seem like the deranged lovechild of David Lynch and Alejandro Jodorowsky which they promptly abandoned. Granted, the film’s surrealism never once felt void of intent or innovation, everything feels bathed in Barney’s unique vision, there is still a strong reason why the Cremaster films were met with mixed reception, because like Pasolini’s films in the 60s, there’s an innate sense of violation the Cremaster films evoke from the audience, with Cremaster 3 being the guiltiest of this with the insane runtime and the highest budget.

To have a film’s transgressive controversy overwhelm its artistic merit to the point where it polarizes critic’s opinions is no easy feat and truly speaks for how provocative the film is.

Nevertheless, if you’re an individual that lives for the surreal, Cremaster 3, and the rest of the Cremaster films for that matter, should certainly be on your radar as they honestly provide a cinematic experience you can’t find anywhere else.

If you thought Matthew Barney was polarizing, consider the reception the Danish director, Lars von Trier has. Von Trier has long been one of, if not, the most prominent figure in avant-garde cinema, constantly finding new ways to reinvent and subvert what it means to make a film.

Dogville is perhaps the most salient example of von Trier’s school of thought. The film is a period piece, set in early 20th century America and touching on very primitive ideologies. In a genre of film defined by the intricacies of mis-en-scene in relation to the set design, Dogville undermines this idea by having little to no set design, with the entirety of the film being set on a barren sound stage with chalk markings to indicate locations.

Aside from the film’s technical aspects, it’s essentially a 3-hour statement on intolerance and bigotry, with the character motivations in the film being increasingly skewed to the point of cruelty, aside from referring to the town the film is set in, the name “Dogville” is meant to allude to the primitive, animalistic side of human nature which the film explores. As with von Trier’s other works, this film is tense, disturbing and also emotionally draining, and despite most of his other works receiving mixed reception, Dogville stands undoubtedly as one of the masterpieces of his filmography and definite must-watch.

The 2013 Palme D’or winner, Blue is the Warmest Color, despite it consisting mostly of dialogue, never once feels draggy, everything on the contrary appears so naturalistic, flowing extremely well, with so much underlying sexual tension behind every word spoken between characters, essentially what you would get if you combined The Handmaiden with the Before Trilogy.

The sheer, raw emotion the filmmakers went for resulted in not only amazing dialogue between characters, but also incredibly intense confrontation scenes, everything felt so powerful with both lead roles pulling off career-defining performances, the boldness of the director to leave most scenes up to improvisation ended up panning out extremely well.

The obvious creative choice when it came to the colours is not only strong in intent despite its simplicity, but also extremely meticulous especially when it came to elaborate sets or scenes with a large amount of extras.

Additionally, by having the characters revolve around the art scene, Blue is the Warmest Color manages to possess surprisingly philosophical undertones, presented in the most unobtrusive way possible and still maintaining the crux of the story at the film’s forefront.