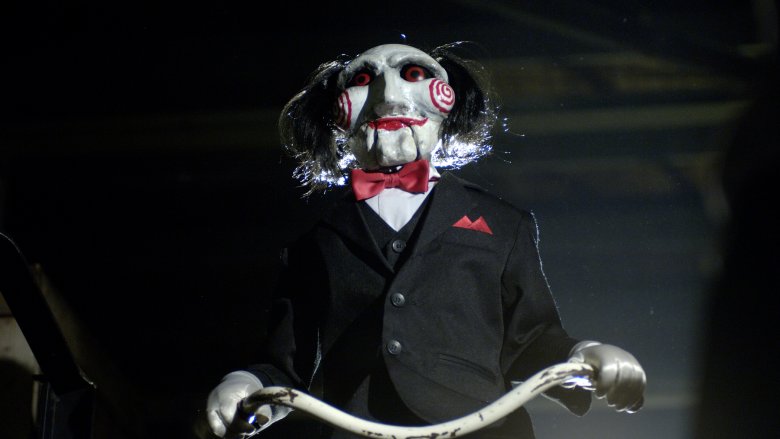 “Why should things be easy to understand?” so says Thomas Pynchon, author of the famously near impenetrable Gravity’s Rainbow (1973). “The device you’re wearing is hooked into your rib cage. By the time this tape is finished, you will have one minute to find a way out” so says Jigsaw, the puppet master that haunts the near impenetrable Saw series (2004-2017).

Jigsaw, as he is more commonly known, is full of the joys only a regained purpose in life could bring. Unfortunately his joys include teaching people to appreciate their lives by placing them in emblematic tests and games, setting traps like a raven hooded poacher and manipulating them from the darkness. And more often than not he is the boatman ferrying his passengers into the underworld, as many do not survive his games.

The films are a spidery kaleidoscope of brutal violence, torture and heavy moral messages, and from small beginnings, have evolved into the kind of endless, spiralling franchise that Jason Voorhees and his mother would be proud of. Tobin Bell is the constant throughout these films as Jigsaw, along with his nightmarish puppet Billy; they huskily lay near impossible odds on people of various dubious backgrounds, hoping to teach them important life lessons. Here, as another entry in the series is scheduled for release, is a list of all the Saw films ranked worst to best. 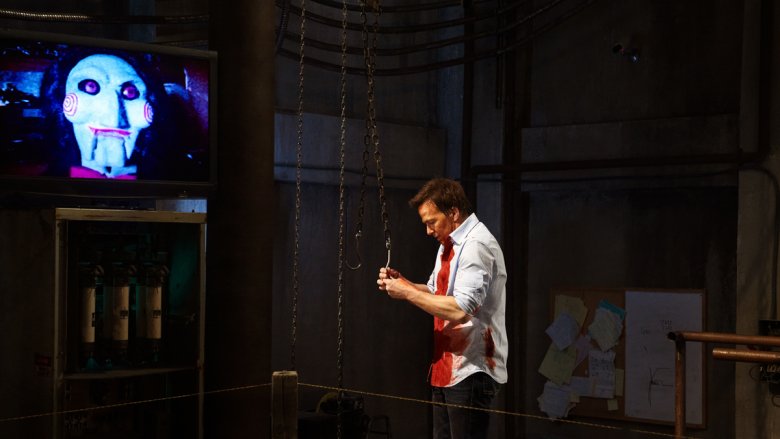 This film marks the return of Cary Elwes as Dr. Lawrence (um…yaaay!), but his scenery ingesting presence limps into frame far less than one expects, also Jigsaw’s involvement is reduced to a few scenes here and there, leaving FBI agent Hoffman and Jigsaw’s ex squeeze, Jill to carry the story (gulp!) castrating the series and rendering it a thriller with no stand out characters for the majority of its run time.

The usual strong opening scenes are dull and uninspired with a literal love triangle, a shop window front and a few circular saws to cut these mugging actors down to size. Some of the worst acting of the series makes this seem like a dull sitcom, every actor, wide eyed and loose jawed scream through various octaves at the camera, and the 3D is unnecessary.

Along with the Hoffman, Jigsaw and Jill storyline (far too many spoilers to go into further detail) continuing on its crazy collision course, we see Bobby (Sean Patrick Flanery), a fame hungry individual, who pens a book about his survival from one of Jigsaw’s traps, now Jigsaw doesn’t approve of his flogging of the story, and naturally Bobby awakens as a centrepiece in one of his deadly games. The tests and traps involved are somewhat sanitized for a Saw film (although still extreme for any other) and maybe the team are running low on offensive ideas.

Undeniably the worst film in the series, it looks cheap and feels thrown together and what was promised at the end of Saw VI has definitely not been delivered or built upon. Jigsaw would be spinning on his autopsy table! 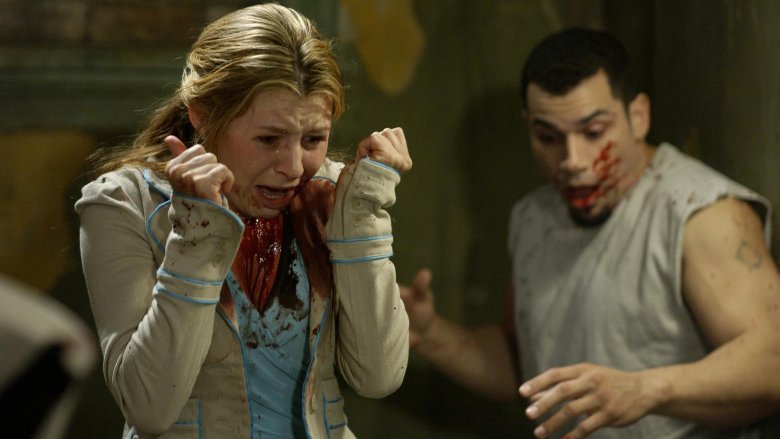 No film is safe, you make a film for a low budget, and it makes a small mountain of money, instant sequel! This time honoured tradition has given the slim budgeted Saw (2004) a sicker, more bloodthirsty but far less engrossing baby brother. Each film from here on in would continue the serpentine plotlines but would ramp up the torture to dizzying heights, adding more pawns to Jigsaw’s twisted game.

At the crime scene of another of Jigsaw’s victims (an eye watering opener) a message is left for struggling husband, father and cop Eric Matthews (Donnie, brother of Mark, Wahlberg,). They trace Jigsaw, now significantly weakened by cancer, to his steam punk battered and junk littered lair, where he sucks Eric into another of his complex plans.

All the while orchestrating another elaborate scheme (who says men can’t multitask?) involving a house full of characters of disparate and troubled backgrounds. The house is slowly filling with a gas that will kill them within two hours, unless the hidden antidotes are found. What follows is a cross between Hostel and a game of bingo.

Saw II doesn’t quite clutch your attention as the first one did, although the opening scene is suitably gruesome, it falls way short after that. This is Bousman’s first feature film and he does a suitable job of keeping all the strands together, but by the end there is so much shouting and incoherence that the viewer tends to get lost.

Jigsaw’s nonsensical meanderings see him placed firmly between Hannibal Lecter and Yoda, and add only confusion to the, already convoluted, plot and the acting from some of the inhabitants of the death house is as volatile and unexpected as one of Jigsaw’s contraptions, one minute ponderous and quiet, the next banshee like, knife wielding and bug eyed.

Unless you really can’t stomach it, these films do hold a fascination, especially in these times of reality television, where we often see large groups of faceless, breathing cadavers knotted together in a claustrophobic situation (and some meet stickier ends than the ones in this film!) 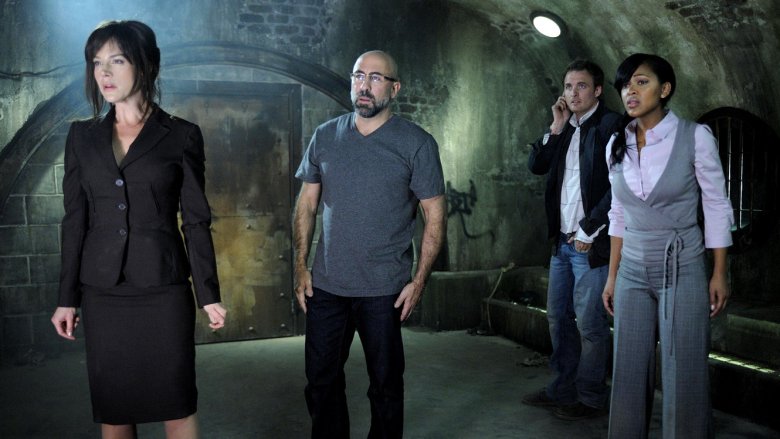 Edgar Allan Poe may not have approved. The opening scene of the “destroying crescent”, the swinging pendulum, leaving nothing to the imagination as it mutilates its victim, is a far cry from Poe’s macabre imaginings. The beginning to a Saw film is crucial; it blasts the viewer with instant gore, setting them up for another rollercoaster ride of limbs, ruptures and psychotic engineering. And even if the bedraggled Poe curses from his gloom soaked grave, this is another strong opener.

Jigsaw has a successor, and now Agent Strahm (Scott Patterson) is beginning to piece together the various parts of this, seemingly never-ending puzzle. But, of course, the new Jigsaw isn’t going to make that so easy for Strahm. The over arching story continues weaving through another cryptic situation, this time, 5 strangers find themselves locked in a room, filled with instruments of pain and condemnation (what did you expect?!) and as they pass through each punishing, defacing test they begin to find out their link.

Saw V bends the story back to its beginnings, tying off loose ends but obviously, setting up for another sequel (the box office has spoken!) It brings back the characters Strahm, Hoffman and Jigsaw’s ex wife Jill, and Jill especially is given a more interesting story, as a curious box is left in her possession, courtesy of her dead husband.

While it takes care with Jigsaw’s flashbacks, it’s still all about the traps, and this one succeeds in making them more inspired and deadly than the previous entry. Jigsaw is now an iconic villain, sharing the same celluloid space as Michael Myers, Freddie etc (albeit more human) but how this series manages, with him being stone cold, legitimately dead in Saw III, to continue lunging on with a banal successor is a mystery.