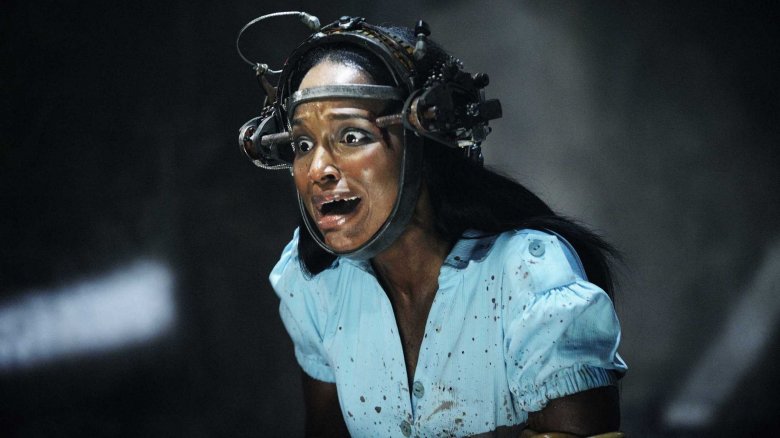 Sixty seconds isn’t a terribly long time, but the amount of carnage a Saw film can cram into a minute as some poor unfortunate reaches critical mass is possibly schizophrenic! Saw VI is no exception, and as usual, a dark room, chains, criss crossings of barbaric steel, and weapons of agonizing detail puncture the opening scenes.

The Saw universe is a confusing place; each film walks into its own maze with its eyes firmly shut (or stitched together) and blindly constructs a new arm to the already overcrowded plot. The first Saw had two people, in a room; the sequels added a lot of fodder to that premise. Hoffman, Jigsaw’s ex wife Jill and Jigsaw himself (how many more flashbacks can this guy be in?!) return for this, a more purposeful addition to the series.

Less of a throw away and more driven to complete the story, it pushes forth with more energy than Saw V and is all the more enjoyable for it. This being Saw, it doesn’t just ditch the splintering violence for a decent plot; we now have an insurance executive, William (Peter Outerbridge), committed to playing Jigsaw’s game. A thoroughly vile human being (even for a Saw film) he passes from test to test, the responsibility of who is to live or who is to die is in his hands.

Too many characters, with too much to do clutter proceedings, making this a mind aching experience, but thankfully Jigsaw’s game with William is a great gory show piece, William is a character you really want to be affected by a final gut crunching twist and put through the paces to be taught a lesson, and Outerbridge injects the character (by the end of the test) with a pitiful desperation.

Jill’s role expands more and sets up a finale that promises a sequel (don’t try and hide your surprise) to finally end the Saw legacy, although, even in his dying moments, the ever productive Jigsaw may have been plotting enough twists and games to fill another ten movies. 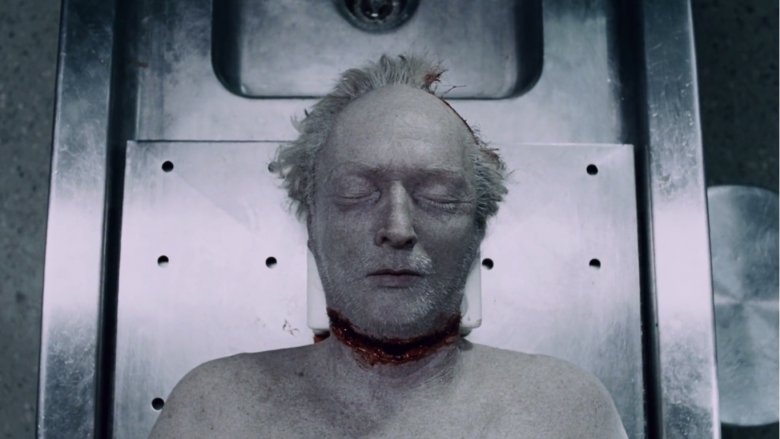 Every monster must have a back-story, from Jason Voorhees and his struggle with Summer Camp bullies to Fred Krueger and his death at the hands of the local Neighbourhood Watch. Jigsaw is no exception.

Now firmly dead, even after heroic, teeth curling brain surgery in Saw III, Jigsaws life story is told through flashbacks in this, the fourth entry in the spiralling series, thankfully this gives the writers something to pad out the film with between the endless scenes of turning cogs and springs and intricate devices snapping into bone and flesh. We finally find out the tragedy behind Jigsaw’s obsessive schemes. Life, to him, really was precious once.

Haunted by the death of his colleagues (all meeting gruesome ends at the hands of Jigsaw), Rigg (Lyriq Bent) is a SWAT team officer, who is kidnapped by one of the deceased’s assailants and thrust into another of Jigsaw’s moral tests. The usual swaggering pieces of torturous machinery are pushed into the camera along with the expected amount of perforations and slaughter, and Rigg has to decide whether he is the saviour of the people tangled in the game, or should they be left to save themselves. If they can’t save themselves do they deserve to live anyway?

The film is helped along and out of its repetitive groove by Jigsaw’s story. They humanize him and give him reasons for his actions, giving him a wife and normality far removed from the hunched desolate figure that has stalked the previous films.

Bousman once again sits loftily on the director’s chair, but his epileptic visual style has been toned down for this, a more character driven work, although it does have its moments, and it resembles a straight ahead thriller, rather than the full bore horror of the previous entries. And now, with Jigsaw’s back-story laid open as wide as his chest cavity after an early soul paralyzing autopsy scene, we finally see how the game began. 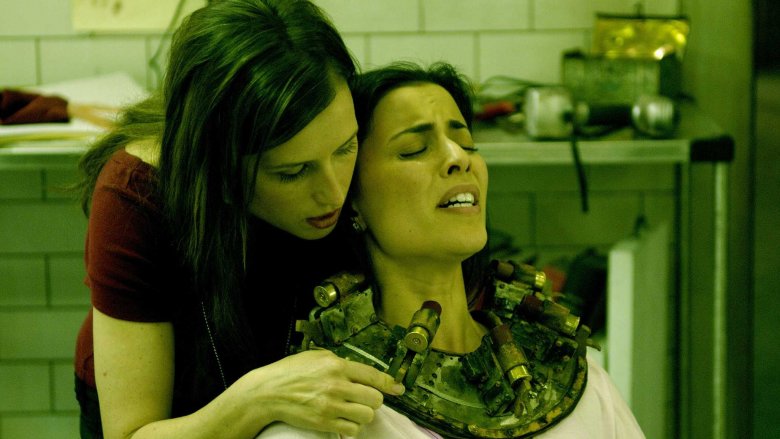 Not since Hellraiser has a film revelled in the tearing of chains from flesh, and these opening scenes, whether watched in tongue lolling joy or behind the fingers anguish, are as grim as any opening scene in any recent horror film to date. An improvement on Saw II in many ways, this raises the bar for gore to unprecedented levels, and without it becoming so outlandish it’s comedic (e.g. Peter Jackson’s flesh splattered masterwork Braindead).

The wheezing, decaying Jigsaw is now on his death bed. With his accomplice at his side he carves out another masterpiece of jaw crunching, moral testers. He is not merely a soulless serial killer; he is St. Peter at the gates of Heaven, there to rain judgement down on the many that do not appreciate the golden gift of life and its many glories. To keep Jigsaw clinging, white knuckled, onto the precipice of life, his acolyte kidnaps a doctor, Lynn (Bahar Soomekh), and with her at his side, bomb collar transfixed to her neck, he watches his next game unfold.

Bousman settles into the series after the needle pricked misstep of Saw 2, but still walks a fine line between intense horror and a flick book of torture devices and gore; he understands this time that wedging something worthwhile between the carnage is needed. The air of mystery and foreboding of the first Saw will never be recreated to such a successful degree, so the filmmakers opt for volcanic eruptions of violence, sprinkled with enough twists to keep the plot chugging along.

The main player in Jigsaw’s production this time is Jeff (Angus Macfadyen). Jeff is a tortured soul, his son dead as a result of a fatal automobile accident. The justice system has failed him and his son, and Jigsaw scatters out before him, like flies caught in a spider’s web, the many parties that Jeff deems responsible for A) killing his son or B) not doing enough to bring the killer to justice. Will an eye for an eye just create more violence or will it bring Jeff much needed closure and retribution.

The whole film, stylistically, is a near two hour attempt at making a music video for an imaginary Industrial band, insane zooms and grinding soundtracks do get a little tiring by the end, especially after all the bloodshed has drained you of patience. Saw III is full tilt extreme, and patch worked, much like Jigsaws bed sheets by the end of this film, with gooey, fleshy handfuls of ultra violence guaranteed to appal, confuse and delight in equal measures. 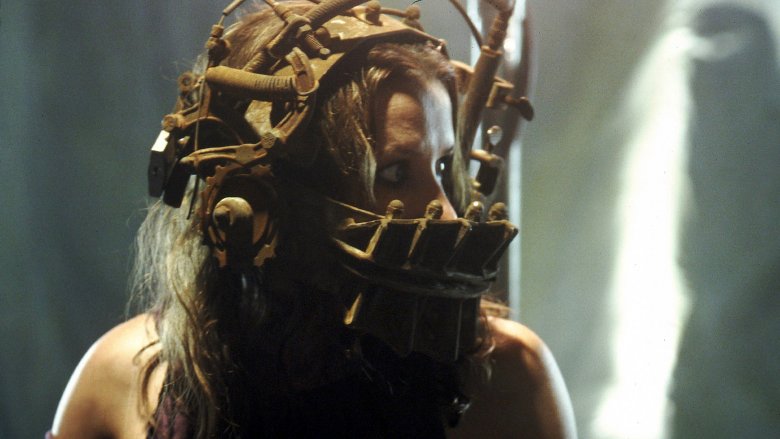 When Danny Glover said he was “getting too old for this shit” back in 1987, little did he know, many years later, more grizzled and world weary than ever, and minus a Mel Gibson, what he would be facing.

Two men, seemingly unrelated and unconnected, wake up to the sounds of rustling steel in the darkness. At opposite ends of the room from each other, both are chained to pipes. Between them is a corpse, blood seeped from a head wound, one hand holds a cassette player, in the other is a gun. The unfortunate prisoners are Adam, a photographer (Leigh Whannell) and Lawrence, a doctor (Cary Elwes) and both nervously ponder the unique predicament that they find themselves in.

A true horror film in every sense, Saw is not a sequel (although it would boast many) and it builds upon an original idea, to create some genuinely terrifying, wince inducing moments. The film is a labyrinth of brutality and pain and the ugliness of the room Adam and Lawrence finds themselves in reflect the dark underbelly of their lives.

Secrets slowly draining out of them as time quickly ticks away, time is short for them both, and for Lawrence’s wife and daughter, who are being held captive. Former detective David Tapp (Glover) is driven to the point of obsession by an earlier, grisly encounter with Jigsaw and is pursuing the case as a lone wolf, after being dismissed from his job. Lawrence was a suspect in that case, and Tapp has begun to track Lawrence’s every move since.

Keeping the mood hovering at a solemn level, interspersed with moments of insanity, this film goes for the mind and the gut. Flashbacks envelope and open up the story and the mystery turns many a dark corner, leaving the viewer to face an unflinching truth crawling out of the murk, one more bloodied piece to fit the puzzle. By the end both Lawrence and Adam are so fatally entwined in Jigsaw’s game they are reduced to bare primal rage and utter desperation, although this is somewhat overdone in Elwes’s performance (maybe he took one look at the budget and thought this another campy cheapo slasher flick).

Jigsaw’s motive remain clear, and asks what would a person do to continue to live, even though life to that person is meaningless to them up to the point where it is threatened. We are all victims of the game, let the game begin.