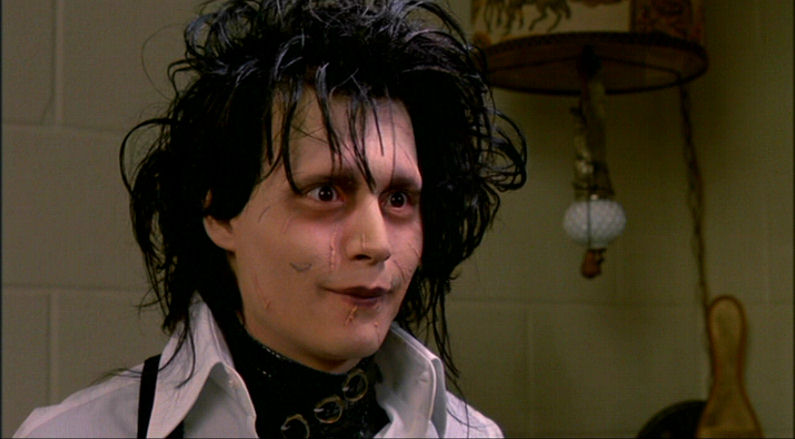 No directors in recent memory have been as successful as Tim Burton in marrying their unique vision with universal popularity. Since his beginning, he has been able to captivate audiences with his arresting artistic design and keep them around with his goofy sense of humor and natural storytelling ability.

His filmography has one of the most distinct director’s footprint in mainstream Hollywood. Filled typically with quirky, supernatural settings and equally twisted visuals, a Burton picture is almost instantly recognizable to any movie fan.

Over the years, Burton has built his body of work on several key partnerships that are integral to his films’ creative power. The most prominent of these is his recurring star, Johnny Depp, whose film career started and rose to fame in Burton’s pictures. Another key addition to his films is the music, provided mainly by Oingo Boingo frontman Danny Elfman whose reputation as a composer has now eclipsed his fame as a rocker.

Like all filmmakers, Burton has his ups and downs, and as he has grown older his films seem to have become less daring, but his genius is still visible in every one of his works. Please enjoy the following list, ranking the films of his career and feel free to agree, or more likely, disagree with the placements. 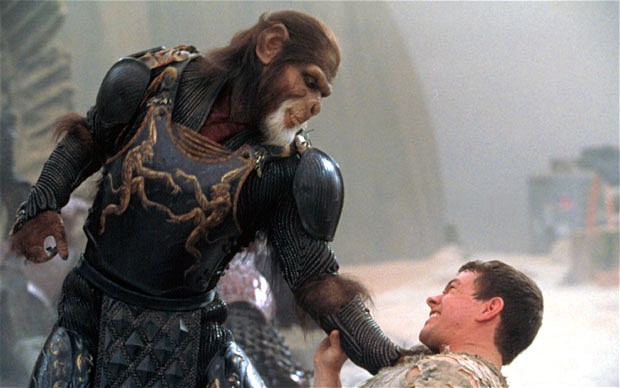 Few remakes of classic films are well received, but even fewer have been as reviled as Burton’s revamping of the science fiction landmark of the same name. The basis of the plot is the same as the original.

A human spaceman, played by Mark Wahlberg, crash lands on a planet which he finds to be ruled by Apes. He is then taken prisoner and made a slave along with the rest of the humans on the planet. He escapes and attempts a revolt but clashes with the General of the apes. Some other time travel plot twists happen and the film muddles into the thoroughly miscalculated ending: a foul rehash of the originals legendary twist.

Much of the time, remakes are chided for being unnecessary money grabs. This cannot be said for Planet of the Apes, a reboot of a series that had been silent for decades, and the current series in the franchise proves it could have been done well. No, the main problem of the film was in the confusing and poorly paced script, which left viewers baffled after.

The acting was passable at best and Burton’s vision was similarly uninspired. It seems everyone involved was just in it for the money. The one bright spot in the film was the prosthetics, but those did not begin to make up for the film’s shortcomings and the infamous monkey-fied Lincoln Monument. 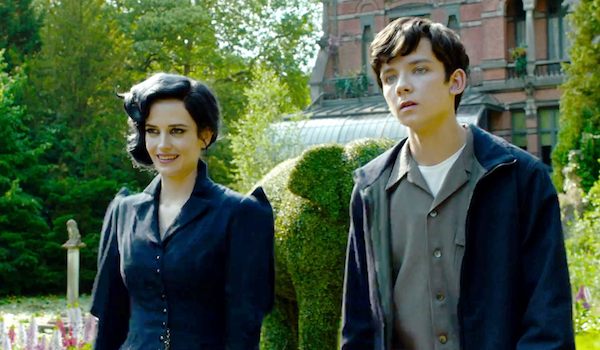 The most recent of Burton’s films as of the writing of this list, Miss Peregrine’s Home for Peculiar Children represents perfectly the faults in Burton’s recent pictures and his current slump.

Ever since Alice in Wonderland Burton has seemingly spent all of his efforts in crafted the most visually dazzling and crowded films with his newfound style of CGI effects. He has certainly shown that he is one of the masters of the craft, but the unique art that made his early works classics has been replaced by much less daring design. Much worse than this change is that the director has appeared to have lost his touch at creating emotionally connective characters.

Eva Green, Burton’s muse as of late, plays Miss Peregrine, the headmistress of a special group of super powered children. The group lives in a “time loop” set in World War II and fight off nasty monsters who wish to steal their eyes. The premise, based on the novel of the same name, is interesting enough, but it soon spirals out of Burton’s control with many time jumps and a rushed pace.

It is certainly an entertaining film, despite the plot’s weaknesses, but in the end there is nothing very memorable about the whole thing. The character’s are mostly hollow, due in no part to the acting, and the beautiful effects are not enough to hold it together. Hopefully Burton’s next big film, a live-action version of the classic Dumbo, will mark a return to form, but with Disney’s involvement, I doubt that he will be allowed the creative control he needs for another masterpiece.

Based on the universe of Lewis Carroll’s Alice in Wonderland, Tim Burton’s overblown fantasy extravaganza takes place many years after the initial stories. Alice, played by Mia Wasikowska, is now of age and is to be married off to a snob and enter into the world of adulthood.

Before she goes through with it, however, she spots a white rabbit and, following, falls down the rabbit hole into Wonderland. Picking up where “Through the Looking Glass” left off, the White Queen (Anne Hathaway) and the Red Queen (Helena Bonham Carter) are at war. It is up to Alice to save the day and defeat the wicked Red Queen and her lackeys.

Rejoining Alice in her new adventures are nearly all of the notable characters from before. There’s the Cheshire cat, the hookah-smoking caterpillar, and most notably The Mad Hatter, played vividly by Johnny Depp.

Unfortunately, despite the wholehearted performances by the impressive cast and the absolutely dazzling special effects, Alice in Wonderland has a weak , underdeveloped storyline and is one of Burton’s most poorly realized projects. Despite bad reviews, the film performed amazingly at the box office, especially overseas, spawning a sequel and a string of real-life remakes of Disney films, like The Jungle Book and Beauty and the Beast. 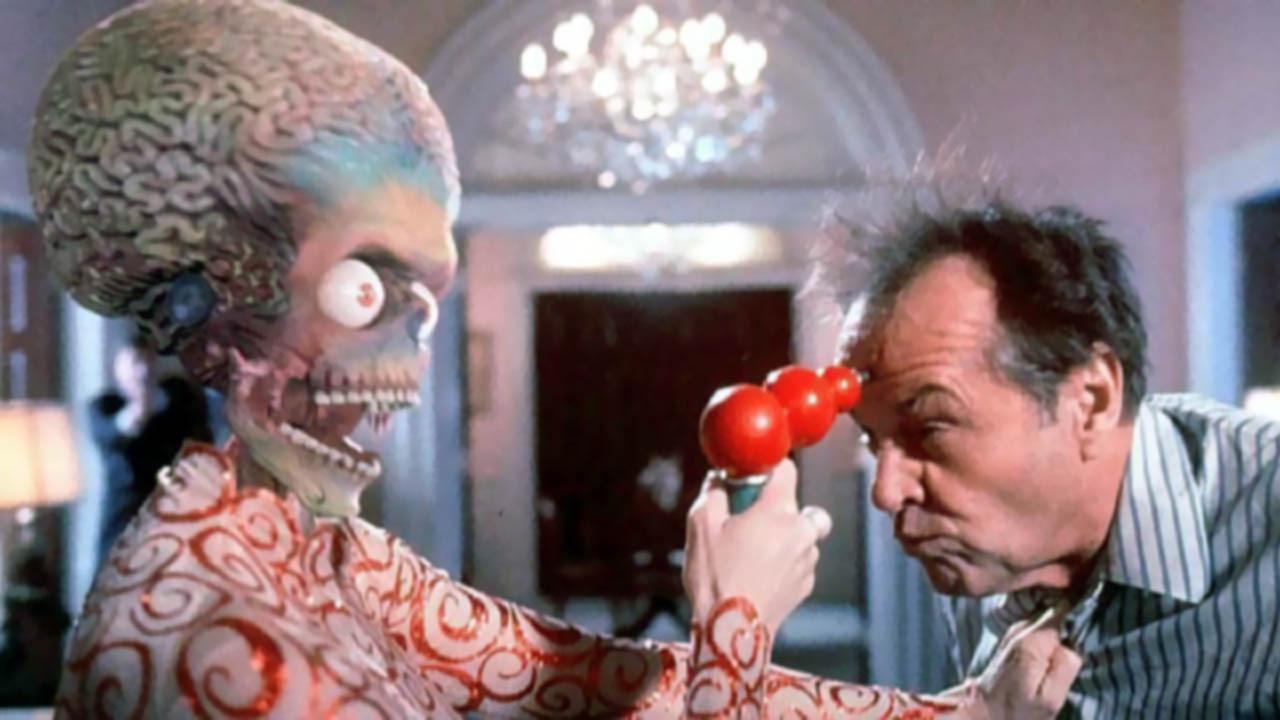 Loosely based on a campy trading card game of the same name, this wacky cult film from Tim Burton satires both the science fiction B movies of the past and the big budget alien blockbusters of the present.

The plot is nothing special, simply focusing on several different characters as martians arrive on Earth and start terrorizing all humans. Some of the characters include boxing champions, news reporters, soldiers, the President of the United States and sleazy Las Vegas developers, the latter two being both played by Jack Nicholson.

As the human population is quickly being decimated by the martians, the heroes must act quickly to find a way to save their planet. Clearly not a perfect film, Mars Attacks still features a lot of funny gags and a lot of enjoyable plot points.

The over the top appearance of the aliens, taken from the trading cards, destroys any hope of scariness for the film but adds a lot to the wacky comic atmosphere. Burton more-or-less created what he set out to do, and and the ensemble cast similarly plays their parts to the fullest. Due to the perhaps too-goofy plot and design of the film, however, it never exceeds the potential of a campy diversion. 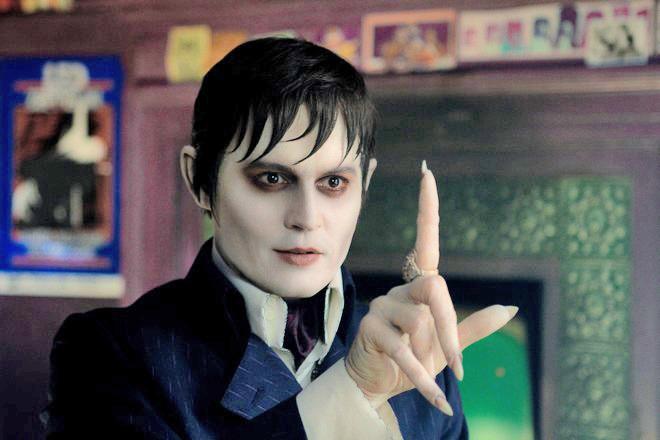 This film version of the gothic soap opera of the same name is a light but fun flick from Burton. Johnny Depp stars as Barnabas Collins, who in 1776 is cursed by the witch Angelique, played by Eva Green, because of her spurned advances and turns him into a vampire. After being finally dug from his coffin in 1972, Barnabas returns to his family’s manor. Now residing in the home is the current Collins matriarch Elizabeth, played by Michelle Pfeiffer, her children and her son’s psychologist, played by Helena Bonham Carter.

His reappearance is noted by Angelique who is immortal as well and who has taken over the fishing business of the town that once made the Collins family so wealthy. It is up to Barnabas to return the family to its past glory and unite them with pride, all the while defeating the evil magic of angelique and capturing the heart of the beautiful young Victoria.

The art direction of the gothic manors mixed with the 1970s culture is stunning and very lively. The performances throughout the main and supporting cast are well realized too. The plot, however, being adapted from a soap opera, lacks a strong narrative fitting for a feature film which is why Dark Shadows ranks so low on this list.

Freddie Highmore stars as Charlie Bucket, a young kid from a poor family who wins a tour of the famous chocolate factory run by Willy Wonka in a contest. He is accompanied on his tour by his Grandfather, as well as the other contest winners consisting a fat German, a TV addict, a rich daddy’s girl and a bubble gum chewing champion.

On a visual level, the film is certainly a triumph, if not a bit too quirky. Johnny Depp’s performance as Willy Wonka, maligned by some, is a highly unique portrayal and helps holds the bulk of the plot together. Unfortunately, Burton takes many liberties with the classic tale including adding many unnecessary plotlines. Not as classic or as magical as the original film, Charlie is nonetheless a highly enjoyable and unique family film of visual splendor.