“People are perverts… that’s pretty much been the basis of my career, anyway.” This quote by American director David Fincher perfectly sums up his oeuvre.

In his movies, he thematizes the darkest places of human abysses and perverted behavior in morbid societies. Few directors have such a strong vision and cinematic trademark as him, which makes a ranking of his productions especially difficult and tight.

It couldn’t be a surprise that David Fincher’s feature length debut holds the list’s lowest spot. Much has been written about the unacceptable circumstances during production, with numerous and rapid script changes and the disagreements between the filmmakers and studio heads. With regards to all these production-imperiling obstacles, the movie isn’t as bad as it could’ve been.

However, it’s disputable whether the ‘Alien’ saga needed and still needs (regarding the release of this years “Alien: Covenant”) this many contributions. But that’s the way Hollywood works. While watching the film, it’s impossible to get rid of the feeling that we’re watching a lukewarm B-movie, vainly trying to continue the franchise’s glory while also failing to grab the audience’s attention over two hours.

As well as the director distanced himself from “Alien 3”, it is senseless to write more about the movie’s quality. After watching, the film should be classified as being noticed and sorted in the infinite memory of cinema history without looking at it more often than necessary.

Fincher’s fifth feature film is a thrilling intimate play starring Jodie Foster, Kristen Stewart, Forest Whitaker and Jared Leto. Following her divorce, Meg Altman purchases a new home with her daughter. The built-in panic room proves beneficial while three money-hungry intruders invade the house by night in order to snare a rewarding prey. But as chance would have it, the stash is right under the panic room’s floor with the two frightened women inside.

The movie offers some fine pieces of cinematographic skill with a load of interesting tracking shots and the Fincher-generic gritty atmosphere. But regarding the lack of protagonists’ depth, “Panic Room” fails to achieve an outlasting relevance as the other movies in the director’s catalogue.

It’s definitely not a bad movie, but rather an entertaining approach on popcorn movies. But while a lot of Fincher’s films impress with their strong meaning and often psychological approach on both the narrative and the audiovisual layer, “Panic Room” misses the chance of going beyond the simple purpose of entertaining. 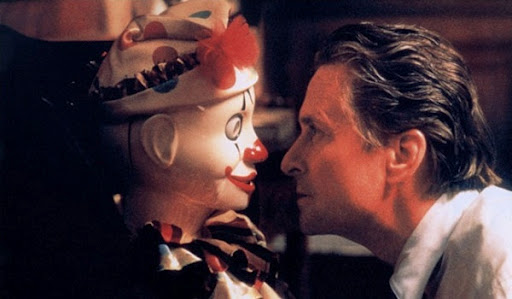 “The Game” follows a ruthless businessman who gets an invitation to an enigmatic game as his brother’s birthday present. Reluctantly he reacts to it and finds himself in a reality-twisting game full of danger and plaguing unknowingness.

Following his commercial success “Se7en”, “The Game” entered the stage in order to improve on this success. In terms of box office returns, the movie barely could make the grade. But in relation to the cinematic and narrative quality of Fincher’s previous film, “The Game” definitely couldn’t win the race.

Quite like “Panic Room”, this movie absolutely follows a more entertaining approach, but with a bit more contentual depth. Nonetheless, the film is one of Fincher’s weaker productions regarding its highly constructed ending and some noteworthy plot holes.

Respectively, the main points of criticism have its roots in the screenplay, not in the audiovisual realization. The dark and menacing cinematography perfectly fits the story’s tone and guides the audience within the coherent and catchy world of the movie. Despite that, Michael Douglas could embody the cold and reserved entrepreneur in a very plausible way, making the movie a well-entertaining pastime.

This movie might be Fincher’s most sentimental, as well as his most classical approach on Hollywood storytelling. That’s not meant to be negative, but while most of Fincher’s other movies win over its unconventional and often shocking vibe, “The Curious Case of Benjamin Button“ doesn’t feel this stunning regarding its narrative structure.

Honored with Oscars for Best Achievement in Art Direction, Makeup, and Visual Effects, the movie’s images are impressive (although there are better ones in Fincher’s oeuvre). In any case, Fincher is an expert in the subtle use of CGI. All of his films are full of invisible VFX shots (“The Social Network”, for example, contains more digital shots than Gareth Edwards’ “Godzilla”), with “The Curious Case of Benjamin Button“ belonging to the podium with its visualization of a massively aged Brad Pitt.

It’s definitely a solidly-made movie deserving its recognition (even if 13 Oscar nominations seem a bit overzealous), but with its length of more than two and a half hours, the movie couldn’t belie its weaknesses.

From time to time, the love story seems a bit cheesy and Fincher couldn’t establish an atmosphere as hauntingly as his darker movies did (even if the awarded production design team did a first-class job). Although, Pitt’s performance is on point and the movie gives some thought-provoking impulses on death and aging in general.

Fincher’s most recent movie, starring Ben Affleck and Rosamund Pike, is a psycho-cinematic approach on illustrating disturbing incidents inside a superficially well-working marriage, with the wife suddenly disappearing and her husband slowly shifting into the police’s focus as the chief suspect.

The movie could trump with an excellent soundtrack (it’s the third collaboration with Nine Inch Nails masterminds Trent Reznor and Atticus Ross) and as usual, Fincher’s unmistakable aesthetic creates a dark vision of an American suburb and veiled chasms of fake-faced middle class societies (legitimately some subtle Lynch-connections might come to mind).

As proven in some of his previous productions, Fincher is a master of timing. He (and of course his screenwriter) truly knows when to show the audience a cinematographic hint or a plot-changing twist in order to enhance the suspense.

With “Gone Girl”, he creates a movie that takes turns in its narrative more than once. But while some of Fincher’s other movies have highly stunning climaxes with a huge factor of disturbance working as perfect finalizations inside the narrative’s arc of suspense, the ending of “Gone Girl” can’t afford that impact, simply because the movie already offered some well-working plot twists with the ending being incapable of surpassing them.