Best-selling author, filmmaker, and Oscar winner William Peter Blatty, who’s best known for writing the novel “The Exorcist”, passed away this January at the age of 89. For an author that started out writing comedy and working with director Blake Edwards, it’s somewhat of a surprise that his 1971 novel, based on a true story about the exorcism of a possessed 12-year-old little boy, would go on to give people nightmares for decades. The cinematic version of his book, which was released in 1973 and directed by William Friedkin, changed the face of horror movies forever.

“The Exorcist” is one the most disturbing and terrifying films ever made; moviegoers were passing out and bolting from their seats and running from the theater because of the film’s intensity when it was first released.

More than 40 years later, the film still retains its power as a horror masterpiece, and can easily spark a debate that it’s amongst the greatest films ever made, but sadly, films in the horror genre are rarely held in such high regard by film critics and historians. One fact that can’t be argued is that from the moment the film was released in the early 1970s to this very day, “The Exorcist” remains the scariest movie ever made.

1. A new concept of horror 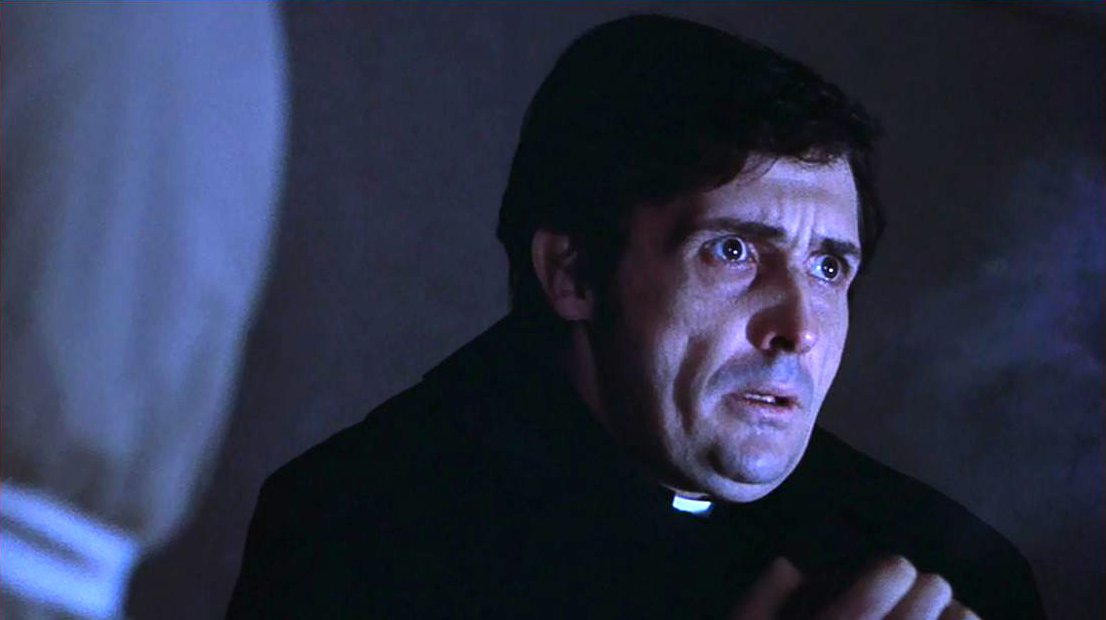 Since the early days of cinema, filmmakers have always used the horror genre to entertain and scare moviegoers of all ages, but after awhile, the usual suspects of characters and stories all boiled down to vampires, werewolves, ghosts and the occasional zombie. However, when “The Exorcist” was first released, the concept of demonic possession was something new for audiences to digest.

One of the first films to mention demonic possession was Alfred Hitchcock’s “Vertigo”, but the master of suspense didn’t explore the concept much in the plot of what some film critics hail as his greatest film. When it was Friedkin’s turn to present this theme to the moviegoing public, this new battle between good and evil was frightening beyond belief.

Presented as a psychological drama, “The Exorcist” is more of a morality tale than an actual horror movie. The film asks the viewer an important question: Are you right with your God? Because there are dark sinister unseen forces after your soul, and no one would be safe in this new concept of evil. There was a randomness to demonic possession to which anyone could fall victim; the film hints that the little girl, Regan (played by Linda Blair), might have been exposed to demonic forces by playing with a Ouija board, but the film leaves the question open to debate.

While watching “The Exorcist”, you can’t help but fear that you might fall victim to this unspeakable madness yourself, and that’s the genius of the film – it becomes personal for the viewer, especially if that viewer had a religious upbringing. If an innocent little girl could have her body stolen and her soul at risk of being taken away, then no one is safe. That’s why “The Exorcist” still has a powerful effect on the viewer, because you can’t escape the evil once you leave the theater or stop watching the film, because according to Catholicism, deep down we’re all sinners in need of redemption, making us all susceptible to demonic possession. 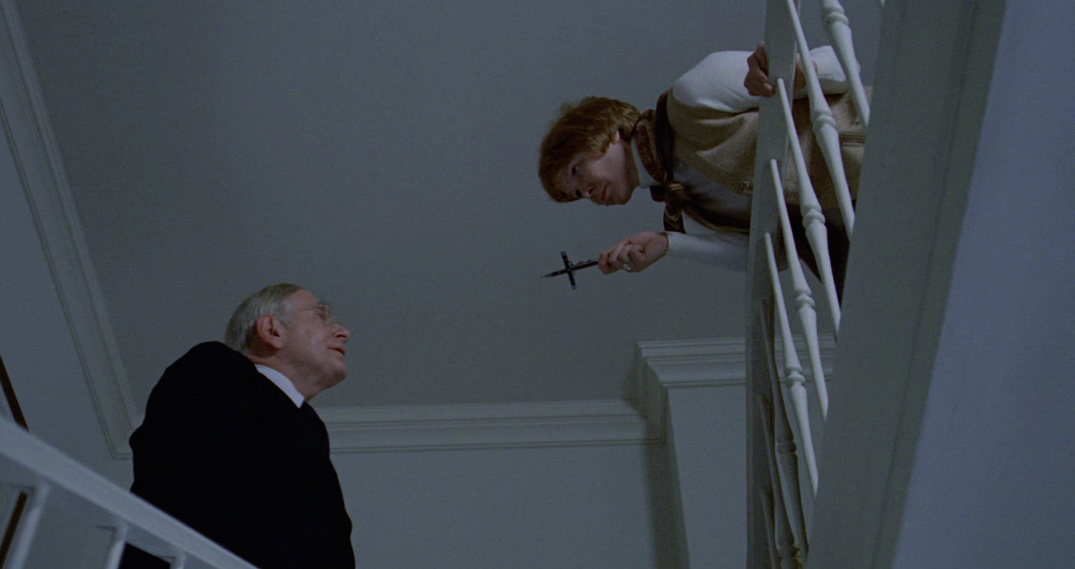 It’s surprising that “The Exorcist” didn’t receive an X rating at the time of its release, as the type of graphic imagery featured had never before been shown on the big screen, and hasn’t been depicted in any other films to date.

Late horror icon Wes Craven once said about “The Exorcist”: “You just felt that the guy making the movie was so out of control that he’s not going to stop when things get so intense, that he’s into a different standard of storytelling, that he will take you to a place that you shouldn’t be.” And the late director was absolutely right, with obscene dialogue coming from the possessed child, such as “stick your cock up her ass you motherfucking worthless cocksucker” or “your mother sucks cocks in hell.”

The film pushed the limits of what was acceptable to be shown to audiences. The graphic nature of the movie adds to its tension, shocking the viewer and breaking down any disbelief in the notion of evil, because the depravity being witnessed is beyond what is morally acceptable for the vast majority of viewers. You have to give Friedkin credit to be bold enough to take the film where few filmmakers would have the courage to go, thus making the film unforgettable. 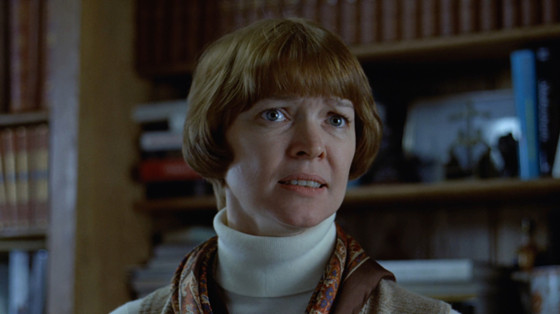 Ellen Burstyn is an incredible actress; she won an Oscar for Best Actress in a Leading Role for her performance in Martin Scorsese’s “Alice Doesn’t Live Here Anymore”. No matter the role, from starring as an delusional drug-addicted mother in Darren Aronofsky’s “Requiem for a Dream” or in a cameo appearance playing the elderly Murph Cooper in Christopher Nolan’s “Interstellar”, she always delivers a memorable performance.

Playing the role of Chris MacNeil, Burstyn delivers a stellar rendition of a desperate yet courageous mother fighting for her daughter’s soul, and this is what helps give the movie its sense of realism. Even as her daughter physically deteriorates to an unrecognizable monster, we still care about her well-being because of the unconditional love being shown by Burstyn’s character. There isn’t one moment in the film where the demonic forces have intimated this heroic woman, and Burstyn makes us believe everything we’re seeing in the film is real because her performance is so authentic. 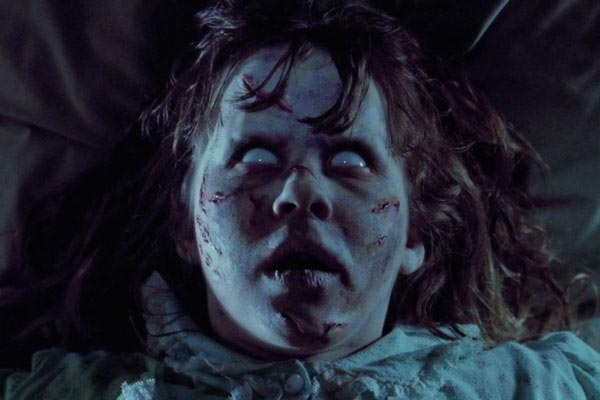 Legendary special makeup artist Dick Smith, along with his protégée Rick Baker, created such realistic effects for the movie that it would be hard to see how computer generated effects of today could even compete. The makeup of the possessed child is something you can’t unsee; it’s so unsettling in how it personifies the face of evil. Smith also turns a 44-year-old Max von Sydow into a 76-year-old priest, and the Swedish actor was actually wearing more makeup than Linda Blair in the movie.

Known as the “godfather of makeup”, his work on “The Exorcist” is still scaring audiences 40 years later and Baker, who would go on to become a legend himself working on special effects on films like “An American Werewolf in London” and “Thriller”, said about his former boss and mentor: “Dick showed that makeup wasn’t just about making people look scary or old, but had many applications. He figured out a way to make the welts swell up on Linda [Blair]’s stomach, to make her head spin around, and he created the vomit scenes.”

Smith’s contribution to the film is enormous because without his talents, the suspension of disbelief would not have been achieved, and instead of scaring the audience, unintentional laughter might have been the result if the special effects weren’t convincing enough.