Stanley Kubrick was offered the chance to direct “The Exorcist”, but the legendary filmmaker turned it down; however, it’s hard to see any other director doing a better job than William Friedkin. Using the same gritty documentary style he employed on “The French Connection”, “The Exorcist” feels less like a movie and more like a true-life event being captured on film.

After seeing “The French Connection”, William Peter Blatty fought hard to persuade the studio to hire Friedkin to direct the film adaptation of his best-selling book. The author’s instincts were right, because Friedkin would go on to win the Oscar for Best Director for “The French Connection”, and overnight he became a very sought-after director. Friedkin, along with famed cinematographer Owen Roizman, created a naturalistic visual tone for the film, which makes the viewer feel more like a voyeur than an actual audience member. You get the feeling that you’re watching something that you shouldn’t be observing, and it’s too late to look away.

During the production of the film, some people working on the set claimed that Friedkin was himself possessed; he fired many workers and people quit the production in high numbers, and even makeup artist Dick Smith quit three times during filming.

Friedkin used unconventional methods while working with his actors, firing off a gun loaded with blanks on the set to scare the actors, capturing their reaction on film, or slapping a actor in the face before yelling “action!” to evoke an emotional performance. The director also played loud creepy music on loud speakers before filming scenes, and all of these tactics worked because the actors appear stressed and tense in most of the scenes.

Friedkin’s biggest accomplishment was directing Linda Blair, bringing out a great performance from the young 13-year-old actress. Many directors turned down the chance to direct the film because they felt a young child couldn’t carry a movie. Burstyn described Friedkin as a maniac, but his eccentric directing methods created a film that stands the test of time. 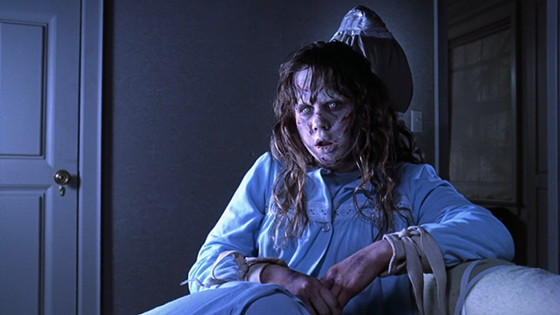 The voice from hell. She provided the demonic voice of the possessed child, and her performance is one of the key factors that makes the movie so terrifying. Orson Welles once said about McCambridge, that she was “the world’s greatest living radio actress.” She won a Oscar for Best Actress in a Supporting Role in 1949 for her performance in the movie “All The King’s Men”, but it was her work in radio that made her the perfect choice to create the demonic voice that has scared generations of viewers.

McCambridge said about her work on the movie: “The film is a one hundred percent radio performance because you never see me; all you do is hear me and yet through the vocal apparatus I made people throw up and pass out and faint.” To prepare her voice, McCambridge would eat raw eggs and drink whiskey, and chain smoke during the recording sessions to give her voice a deep and harsh tone. Friedkin also had her tied up and bound to a chair to achieve the sound of the demon struggling to break free from its restraints. McCambridge gives a powerful and nuanced vocal performance that has scared the hell out of people for decades.

The final showdown between good and evil doesn’t disappoint. “The Exorcist” is full of so many unsettling moments that it’s surprising the movie could get even scarier at the end. Brilliant performances by Jason Miller, Max von Sydow, and Linda Blair make the last battle a tour de force. Friedkin had the set refrigerated so you could visually see the actor’s breath, and the setting is so claustrophobic that there’s no escaping for the audience.

Salvation and a question of faith are the themes being played out, especially when Father Damien Karras, a priest who’s struggling with faith, realizes too late that he’s not dealing with a mentally ill child, but is face to face with evil. And when Regan levitates over the bed and the priest recites the line over and over “the power of Christ compels you”, it brings a certain realism to the movie that other horror films could never achieve.

What makes the exorcism at the end so riveting is the notion of sacrifice where both priests succumb and lose their lives in the battle, but Father Karras regains his faith and offers his body to the demon so the child could be saved, and that sacrifice is a powerful explanation point to such a great film.

“The Exorcist” wasn’t just a great film – it became a part of pop culture and few films are as popular as this one is around the world. Stories about strange happenings on the set became urban legends. A sound stage mysteriously caught on fire and nine people involved with the production died during the filming, and a priest working as a technical advisor performed a ceremony on the set to relieve the fears of the worried crew members. An unintended consequence after the release of the movie was that other horror films couldn’t live up to the scares that were delivered in “The Exorcist”.

There have been many good horror movies but none that match or exceeds its impact. While many consider “The Exorcist” the best horror film ever made, Friedkin didn’t intend to make just a horror film. The director once said about the film: “I know that it is considered by a great many people as a horror film. I’ve never thought of it that way and I didn’t approach it that way. It’s a story about the mystery of faith.” That approach is why the film does more than just scare you – it gets under your skin, making it the scariest horror film ever made.