It’s been 40 years since the release of the award-winning film “Network”, and the howl of Howard Beale still echoes through the streets of America. Even though the film isn’t always perceived favorably by people in both the Libertarian or Republicans parties, mostly due to its indictment of soulless corporatism, Beale’s rage can be shared by everyone, regardless of their political spectrum.

Hell, maybe it’s even more relevant now. With all the countless information available, – from whistleblowers to WikiLeaks to cynical bloggers – the Howard Beales of today can find more reasons to be cynical than they would have in the 1970s.

“Network” is also a film that doesn’t get enough credit for how it has inspired film, or even 21st century culture. The media figure erupting into brutal truth-telling was used several times by Aaron Sorkin, and even he has admitted being inspired by Paddy Chayefsky’s writing. Great comedic misanthropes such as George Carlin and Bill Hicks have echoed Howard Beale, but former FOX News pundit Glenn Beck and current pundit Tomi Lahren have also taken lessons from this popular character.

They do this because they know that people are mad as hell and want to know the truth. For many of them, the truth seems unattainable, hidden deep within media propaganda. They wait for that one person who can open their eyes and tell them where to look, and tell where the bullshit ends. The downtrodden Jesus rising from the muck, squeegeeing – as the great Bill Hicks would call it – our third-eye, making us see what’s really going.

Because people know that something is wrong, they know they are getting screwed and they want to know where to look. Sadly, as most of us know, this persona was also used by various propaganda channels to misinform and shape opinions. A character of Howard Beale can be dressed up to serve a different purpose than Chayefsky had originally intended. It was to be expected. It happens in the film as well.

But the real Howard Beale is still out there; it’s in the movie “Network”, a perfectly directed film with a perfect cast. The film, even with all its 1970’s nostalgia, still has much to say about the current world. It was far ahead of its time and hardly gets the right credit for it. Hopefully, in this article, you will be convinced by not only the film’s greatness, but about how close Chayefsky was about the end of the 20th century and the beginning of the 21st century.

1. The Quest for Ratings (and the death of journalism) 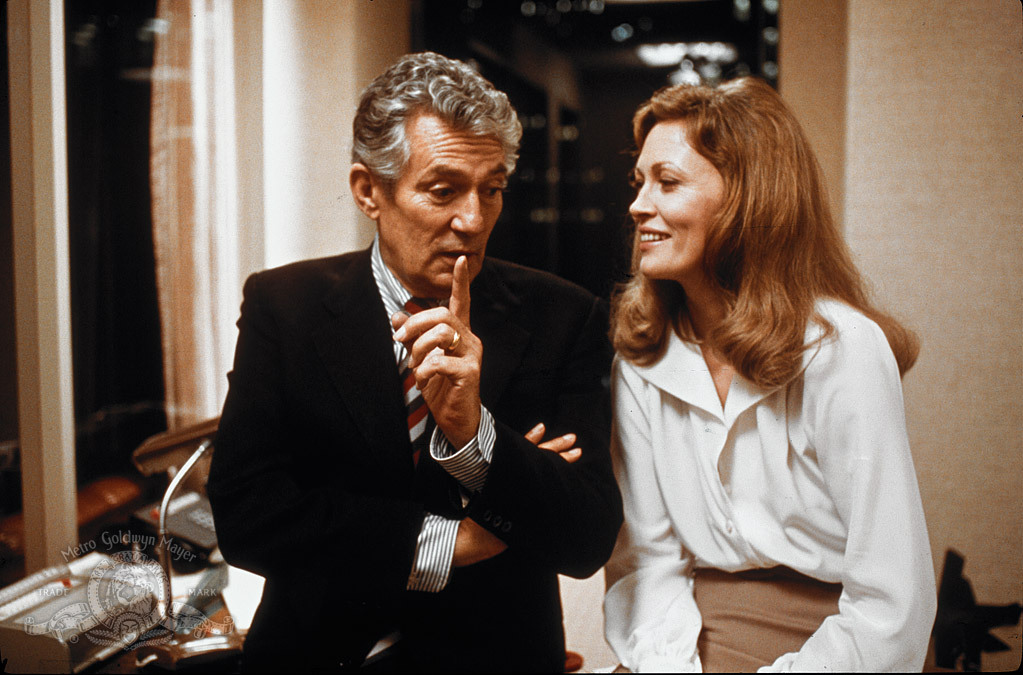 Many people complain that we have become increasingly divided nowadays. In retrospect, this is something in which every generation thinks it’s special. Yes, we are divided, but so were the people before us. In the 1960s, there were riots, and people died for portraying their disgust with the status quo.

Division is inevitably a byproduct of democracy; in order for it to work, there has to be more than one side. One will attract a certain group of people, and the other will attract another group of people. Any person reaching for a seat in power knows all too well that knowledge is power, but that truth will not necessarily be in his favor. The fact that politicians twist and turn the truth is no surprise; it’s something that is considered to be part of the job.

What is stunning about these days, however, is that the division is caused by more than just a mere difference of opinion; it’s caused by how staggeringly easy it is to hide from reality. One would presume that with the global information network, that reality (with all the unlimited information available) is much easier to obtain.

In previous generations, we had different TV channels preaching different sides of the same coin, both revealing some degrees and being blind to others. Some were raised to watch one channel, and the other was raised to watch this channel. Now, we are freed from this. We don’t have to only rely on our television medium; we can research on the Internet and reach our own conclusions.

However, that’s the exact thing that causes us to lose grip of reality; the human animal more often than not confuses the pursuit of truth with confirming their own biases. People can shut themselves off from hearing anything they find uncomfortable, and their newsfeed will block any voice of dissent that is not to their liking.

Rather than informing you about what’s really going on, it has become a tool that constantly enables your own warped view of the world. The human animal would rather confirm his own biases than seek out the truth.

Many people mourn the days when they could rely on their newscasters to reveal the sinister mechanics of their leaders. In “Network”, we see what happens when a news network becomes privatized and is focused on entertainment rather than information. It’s the quest for ratings instead of good journalism.

One only has to look at other news channels to see how much is dressed up, how much is focused on slogans, and how much is done to make the news sound thrilling. Sadly, people listen more to bells and whistles than the dull voice of logic, and whatever makes money will ultimately gain more support, whether it’s good for the public or not. 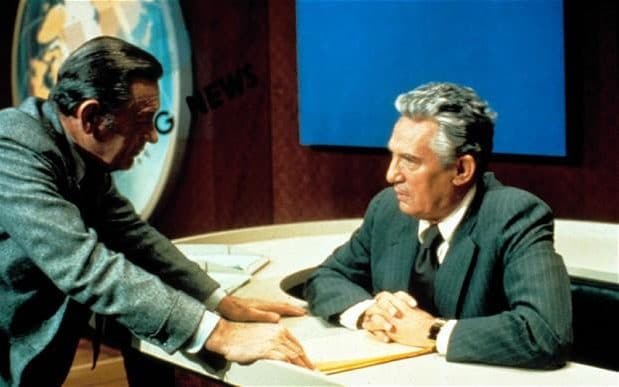 As the citizen has shut himself off from any opposing world views, its purveyors of information constantly need them to be outraged about the opposing party. it’s very much like war; the enemy must not be humanized, as it’s just not good for business. When Barack Obama won the presidency in 2008, his voters were the enemy of the American republic.

When Donald Trump won this, it meant that all his voters were sexist deadbeats and racist losers. In so many ways, things have to be black or white. This is the only way to make people stand up and fight for your cause.

But as this happens, no matter who wins, inequality remains a clear and present danger. And whatever side the public chooses, they are going to be mad as hell. Citizens need to believe that things are as hopelessly simple as their chosen prophet believes them to be, because citizens are overwhelmed by the seemingly unnerving complexity of the economy, of wars abroad, of campaign finance, of terrorism. Reality is a frustrating greyness, full of different components that lead to the state of things.

People are frustrated and most of the time, they don’t pick the right enemies. Howard Beale preaches for them to get up from their chairs and scream out the window: ”I’m mad as hell and I’m not going to take it anymore!” But people don’t know who or what exactly they are screaming about. They are just pissed and they need their leaders to know this.

3. The Exploitation of People with Mental Health Issues on TV 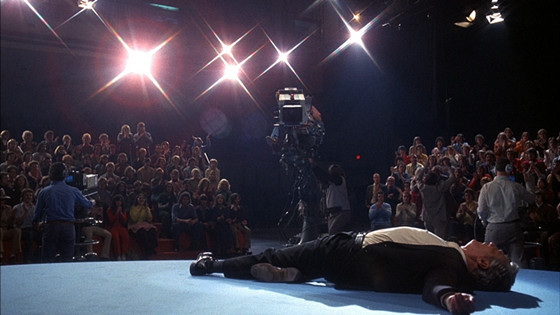 Ever since then, the reality TV concept has changed television forever. The notion that it was all staged had been there before, but now it has become common knowledge, and people either pretend it isn’t staged or simply don’t care. The tragic downside is that many people, who are attracted to becoming famous, find that their only chance is on reality TV. Many of these participants show mental health issues, but to many viewers, this is just more entertainment for them.

Outsiders are shown for all to see, to feel sorry for or to laugh at. But as Bobcat Goldthwait’s excellent “God Bless America” showed us in the end, these outsiders just desire that piece of attention that the seemingly perfect specimens on billboards and in blockbusters receive on a daily basis.

In “Network”, Howard Beale is a man on the verge of a psychotic breakdown. He proclaims on live television that he wants to kill himself and instead of the network offering him help, they make him a host of his own TV show where his antics become the amusement of many. This point is satirized (and mourned by Beale’s friend Max Schumacher), but it’s something that happens even more today, even with the rising tide of awareness concerning the fragility of mental health.

4. Life as a Series of TV Cliches 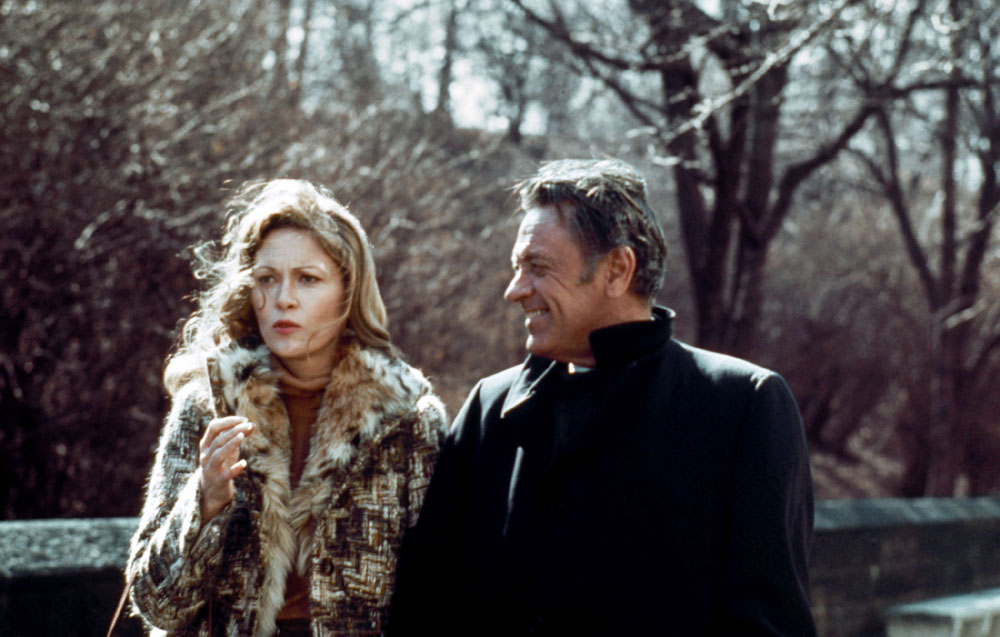 In “Network”, Max Schumacher becomes aware of what a clichéd character he actually is; the estranged husband having a fiery affair who inevitably returns to his wife. This is Chayefsky’s brilliant observation regarding how real life is often confused by the clichés we see on our screens. People become so used to hiding in front of their screen that real life can hardly compare.

Our friends are the TV characters of our favorite shows; our dream lover must look like the movie star you always fantasized about. We have always enjoyed escapism, ever since we childhood, and we go around in circles just so we can experience the dizziness, so the world around us becomes just a little different than from what we used to.

Like the chief in Satoshi Kon’s excellent anime show “Paranoia Agent” (one of the finest indictments of escapism you could find), Schumacher manages to escape back to reality, deciding that emotional honesty, no matter how painful it may be, is the best way to live.

His lover, Diana Christensen, is not so lucky. She is so swept away by her work that it defines not only her but the world around her. The breakup between her and Max affects her in ways she does not want to comprehend. Instead of confronting herself and saving what is left of her soul, she instead pulls herself even further into the white noise of television and eventually becomes complicit in the murder of Howard Beale.

The central thesis of how media influences our perception of reality, even in our interpersonal relationships, will be and has always been relevant from the moment TV first dawned into the lives of humans. Standards change, for better or for worse. However, more often than they probably know, people take the messages of their films and shows to heart, and maybe lead their lives by them; watch how people use buzzwords they hear from movies and TV shows as they go into the dating world.

People work out tirelessly just so they can look like certain film and TV celebrities. There are countless examples and they will keep piling up. Television is the stuff of dreams, and people will always be seduced by it. And some will not make it home after the movie is over.