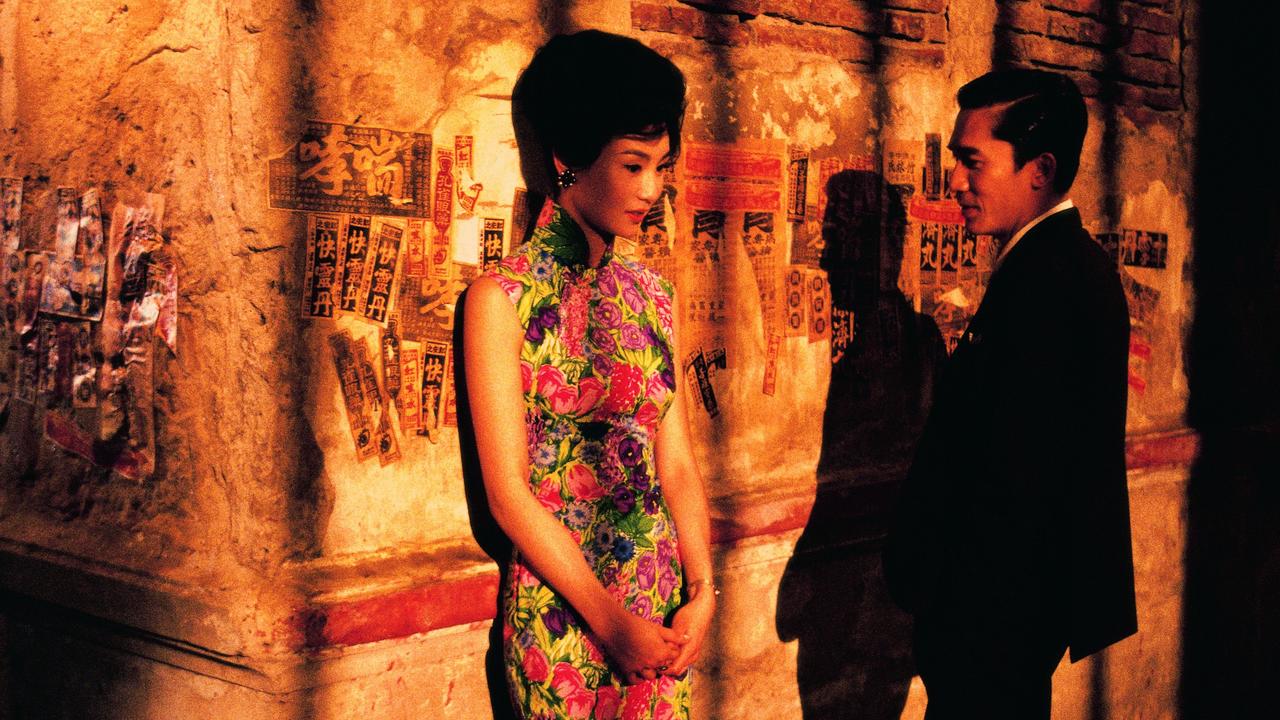 In his review of “2046”, a Wong Kar-wai movie that is practically a sequel to “In the Mood for Love”, Roger Ebert wrote: “It is always too early or too late for love in a Wong Kar-wai film, and his characters spend their days in yearnings and regrets.” This may be a starting point to understand “In the Mood for Love”, and the eroticism and romance that permeate the movie.

The mood it creates is that of longing; a mixture of feelings of desire and regret over things done, or not done. The film follows Mr. Chow and Mrs. Chan as they form a bond that is characterized by their strong romantic feelings toward each other. They suspect, obviously correctly, that their spouses are having an affair, and form a bond based on mutual affection and the shared experience they are going through.

What makes this film distinct and unique when compared to most romantic movies is that it deals with a relationship that is never going to happen, but nevertheless, a great loss is experienced.

A portrayal of a couple agreeing to keep their bond “platonic”, and yet suffering great sadness over the loss of each other that spans over years, is a recipe for a love story long to be remembered. Its flavor is a tragic one. In “2046” we learn how Chow deals with the loss years after. He engages in one night stands and refuses to be emotionally involved with another woman on a deeper level.

The fact that it was too late or too early for love is symbolically portrayed in various scenes in which only a clock is shown on the screen. Visually, and in terms of a distinct cinematic style, the moments of intimacy and sadness are captured with perfection.

In this article, seven reasons will be presented for why “In the Mood for Love” may be considered the most romantic movie of this century; the uniqueness of its narration and its characters’ most intimate feelings are depicted with great care, sincerity, and artistic vision, making it a stunning accomplishment.

1. A tragic choice and its consequences

It is safe to assume that “Romeo and Juliet” wouldn’t be an everlasting love story with an influence that spans over centuries if it were a drama about a happily married couple in Verona. Its tragedy, with both lovers ending up dead believing they lost each other,  makes it appealing to readers and viewers of countless transpositions.

For Aristotle, the aim of tragedy is to bring “catharsis” to the spectators, to arouse in them the sensations of pity and fear, and cleanse them of these emotions. Catharsis is brought by witnessing a disastrous change of fortunes in the protagonists of a drama.

“In the Mood for Love” can be considered tragic since the fortunes of Mr. Chow and Mrs. Chan changed dramatically in a way that shaped their lives in a deeply unfortunate manner. They experienced a bond, a connection, but ultimately they lost each other. The movie opens with a caption: “It is a restless moment. She has kept her head lowered… to give him a chance to come closer. But he could not, for lack of courage. She turns and walks away.”

The film may be considered tragic since the protagonists are faced with a tragic choice. Either they will resist the temptation to be together and stay loyal to their spouses, or they will be courageous enough to leave together.

The virtues of loyalty and courage are mutually exclusive in this instance; it is either the one or the other. Mrs. Chan says “We won’t be like them,” implicating that she puts the emphasis on loyalty.

Nevertheless, both characters later show great desire to leave together, to be courageous enough to start a new life, and yet they do not. In his book “Moral Dilemmas”, Daniel Statman writes: “Tragic choices are situations in which ‘whatever a person does, he would irreparably damage one of the projects or relationships which he pursued and which shape his life.’”

Whether courageous or loyal, both characters would most certainly lose each other, or bring an end to their respective marriages; both relationships seem to have considerable impacts on their lives. The romantic mood and emotional tension of the film have roots in the tragic choice the protagonists are forced to make. In “2046” Chow says: “Some years back I had a happy ending in my grasp, but I let it slip away.”

2. It shows how “it’s already happened” before our eyes

When Mr. Chow and Mrs. Chan begin to see each other, one of them makes an advance. We do not know who it is, since both his and her advances are shown. After Mrs. Chan says she cannot “say it,” Mr. Chow says: “I understand. After all, it’s already happened. It doesn’t matter who made the first move.” This scene shows how romantic feelings just happen, and there is no need to rationalize them or put them in the “right context”.

Later in the film, when their feelings toward each other evolve in a more deep and profound way and they have already made their choice to not be together, Mrs. Chan says: “I didn’t think you’d fall in love with me.” He replies: “I didn’t either. I was only curious to know how it started. Now I know. Feelings can creep up just like that.”

He explains the nature of romantic feelings, how there is no possibility at all to understand them rationally, or find a certain point in time in which they arose. They just happen. These thoughts present the romance in the movie as an atmosphere, a certain mood that is felt by the protagonists, and that affects the viewer as well. This mood may be reflected upon or discussed, but just like joy or sadness, it speaks for itself.

In Plato’s “Symposium”, Aristophanes describes the great joy of lovers: “And when one of them finds his other half, whether he be a lover of youth or a lover of another sort, the pair are lost in amazement of love and friendship and intimacy… yet they could not explain what they desire of one another.”

This joy is, for the most part, denied for Mr. Chow and Mrs. Chan, since they see their relationship as forbidden, yet they feel a strong longing for each other, without a possibility or need to explain what it is about each other for which they yearn. 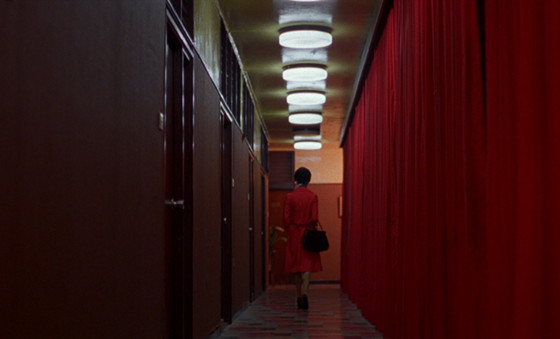 The place in which they reside is one of tight spaces, small rooms, and a narrow hallway that suggest intimacy; as an example, Mr. Chow and Mrs. Chan are “trapped” in a room all night while the neighbours are playing a card game. It also suggests a lack of privacy; their relationship is not possible in their perspective, since others might suspect something and treat them as adulterers.

When Mr. Chow moves to another place where there is more space, this suggests their detachment at that very moment, but also a need for privacy so their relationship can succeed. The curtains are intensely red, portraying the passion they feel for each other, but to also show how distant they are, as well as the fleeting nature of their relationship, since the curtains move in the wind.

When they finally depart from each other, cold colours dominate the screen, like a blue sky or green clothes, depicting sadness and loss. In the film’s final scene, the monk’s robes are yellow, in sharp contrast to the nature of the scene in which the halls of the temple are vast and made of stone. 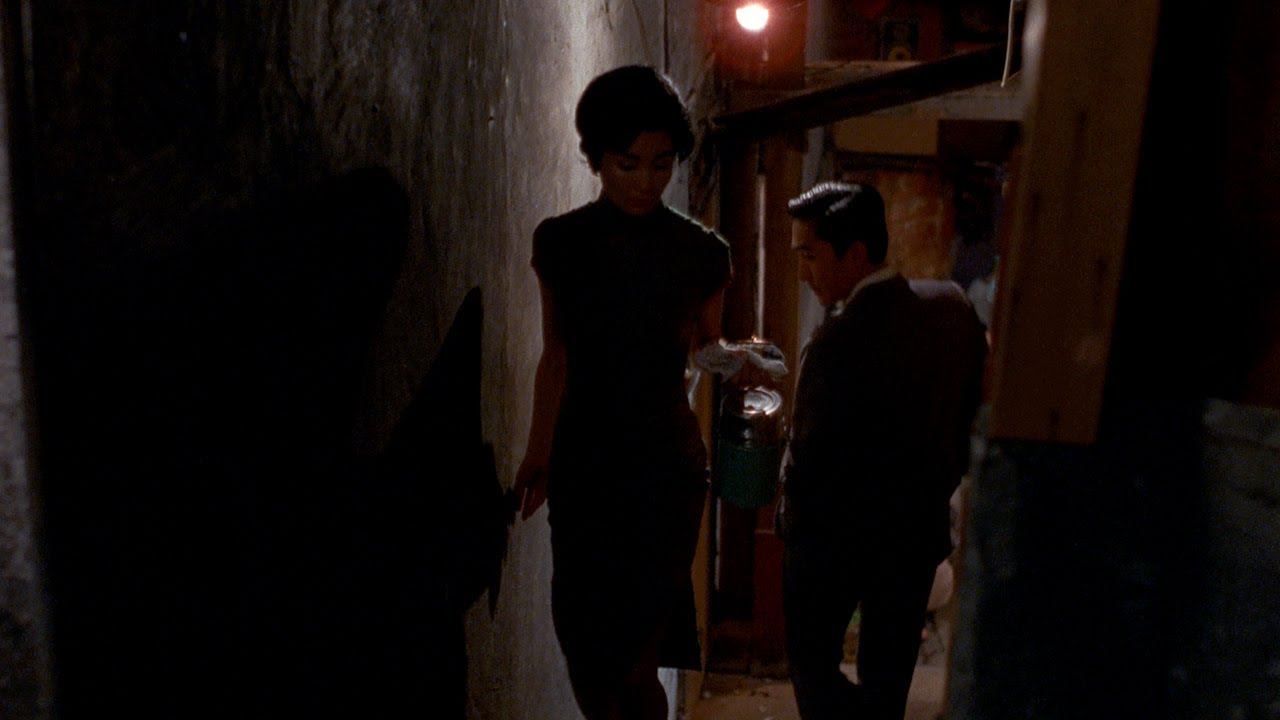 Contrary to the melancholic but passionate music throughout the film, the music in the final scene is solemn. String instruments dominate again, but they depict a feeling of loss rather than opening possibilities and eroticism.

5564
SHARES
FacebookTwitterSubscribe
Subscribe via Email or RSS Feed
Pages: 1 2
Comments (4)
In the Mood for Love