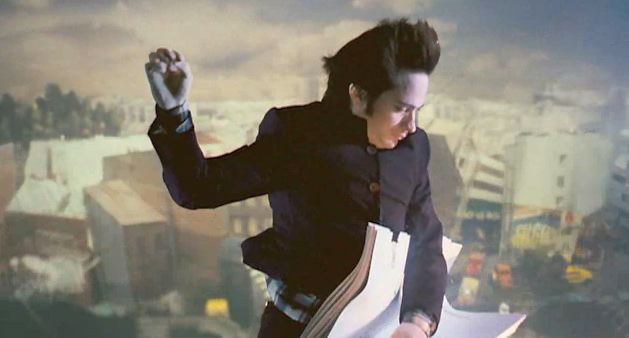 Best known as director of such films as Eternal Sunshine of the Spotless Mind and, um, that White Stripes video comprised of animated Legos, Gondry has crafted a unique philosophy around the also-Jungean idea of the inner child, whose surfacing can be tied to the indelible images of Lego-brick Jack White, Thom Yorke’s Operation-game-board ladyfriend, and, of course, an unsettlingly-serious Jim Carrey’s brief transformation back into his natural state of impish dissident as “Baby Joel” in Gondry’s iconic Academy Award winning drama.

One explanation for Gondry’s frequent lapse into childhood is his permanently tangled French and American roots – where the surrealists looked to the unconscious for their automatic writings, Gondry looks no further than casual conversations in which his misinterpretation of language translates to bizarrely filmable ideas explored in surprising depth (for a very un-workshopped 89 minutes of such conversations, take note of list item #7).

Exploiting this jejune incertitude as intentional artistry, it’s unclear as to whether Michel’s surrealist storytelling experiments are a result of his making excuses for being lost in translation, or if his mistranslations of being lost are an excuse for his surrealism.

Though it’s certainly believable that Sofia Coppola wrote her own Academy Award winning drama as a dissertation on its thought-provoking titular idiom, Michel’s name is always first to come up when discussing this infantile-deconstruction-of-language-as-source-of-infinite-originality method of filmmaking.

So what has the duality-of-Michel been up to for the past twelve years? There was some buzz a few years back about the Dune-like studio fiasco known as The Green “Not-My-Movie” Hornet alongside Seth Rogen (co-screenwriter and film’s perpetual diegetic Statler sans Waldorf).

But aside from occasional pop culture relevance filming major celebrities in their respective heydays, Gondry has been cranking out highly personal accounts of his dream life, his childhood, and his present reality-based concerns over family relations and communicative barriers, which draw from the collective unconscious though highly specific to the filmmaker’s playplace of a brain. Inhabiting the middle ground between wakefulness and sleep, Gondry narrates the linguistic phenomena of being reborn into a new language with an inhuman unpretention exclusive to infancy.

As a case study of the director’s arrested development, crippling nostalgia, and unparalleled creativity, each of his films appeals due to its repetition of these familiar traits frequently foreshadowed in his previous life as music video director, maintaining a steady audience through animated conversations with verbose linguists and Seth Rogen-penned screenplays alike. 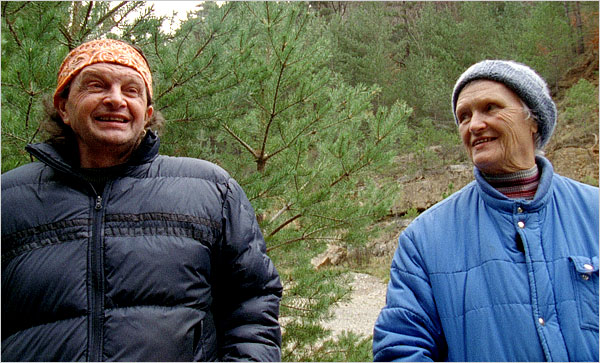 Michel the Adult: Prods through family history to better understand his relatives on a deeply emotional level
Michel the Child: Superficial interest often eclipsed by an attention span on par with that of his music video days

It doesn’t get much more personal than filming family get-togethers with the intent of pressing a taboo subject of great tension until it painfully surfaces, as is the MO of MG in his documentary project The Thorn in the Heart.

Chronicling the complex relationship between his aunt Suzette and her son Jean-Yves, the incidents of Jean-Yves’ coming-out and concomitant mental breakdown overpower much of the film, though the broader meditation on how familial experience shapes us remains evident both through the in-depth exploration of Suzette’s past and the naturality of idiosyncrasy within the Gondry family.

While Thorn has almost exclusively been written off as self-indulgent, undeveloped, and inaccessibly personal, it succeeds as a sort of sketchbook of ideas for Gondry, encapsulating a number of beautiful and memorable images effectively drawn from inspired thoughts.

Michel the Adult: Suffers the particularly French despair of prolonged lust and ultimate heartbreak
Michel the Child: Explores these feelings through the particularly childish lens of someone constantly living in the shadow of an older sibling

In a rare experiment in black-and-white filmmaking, Gondry’s only nod to his homeland’s reinvigorating New Wave takes the form of a thirteen-minute portrait of a boy infatuated with a longtime friend who he’s too timid to make a move on.

The Letter focuses on Stephane’s developing feelings towards his classman Aurelie, a subject punned upon in the first five minutes as we watch the camera-savvy Stephane develop a photograph of her (certainly not the first he’s taken, we quickly learn from ribbing comments made by his older brother).

But what begins as an anachronistic brotherly dialog on the abstractions of amour (and vulgar details of French kissing) quickly reverts to unambiguous Gondryisms, favoring the heavily symbolic dream sequence and earnest, heartbreaking resolution over free-form subversion of cinematic and human behavior and staccato editing techniques.

This isn’t to say the film carefully replicates the Gondry paradigm – The Letter stands apart in its fairly standard representation of a child learning adulthood as any other coming-of-age story might, rather than an adult figure drawing out childhood indefinitely, adding a refreshing caveat to interpretations of Gondry’s work as merely a creative riff on the self-pitying-writer-projecting-himself-onscreen trope Hollywood has been regurgitating since Annie Hall. 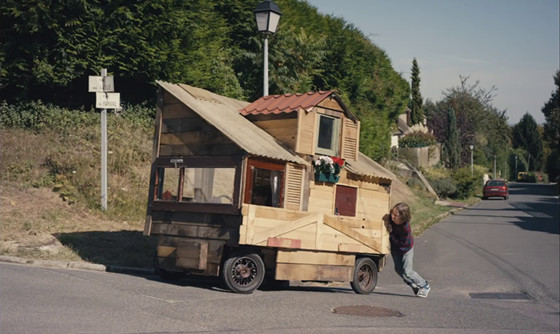 Michel the Adult: Reflects upon the growing pains and fantasized escapism of alienated adolescents
Michel the Child: Injects poop jokes wherever possible

Recycling the basic premise of his early portrait of the artist as an awkward, lovelorn pre-teen almost twenty years later, Microbe & Gasoline expands the concept of The Letter into a fully-formed filmed about the process of becoming, well, fully-formed. The equation remains the same (a boy, his love interest, her letter and subsequent dispersion to a summer home) save for the addition of all the ingredients for a quality road movie (a buddy, the open road, a homemade vehicle that doubles as a homey cabin), resituating it within a filmic context more suitable for a habitually restless filmmaker.

Microbe marks a definite shift from the paradoxically contemplative surrealism championed by the man who has made a short film about being harassed by his own feces, and instead stays true to the crude spirit of childhood – a less self-centered form of indulgence, and a language Michel understands fluently.

What results is an idyllic escapism from overbearing mothers, underbearing fathers, and empty-nested dental hygienists, and ultimately a resituation within reality in which to implement the residual growth of a summer spent with a provocateur of necessary development. 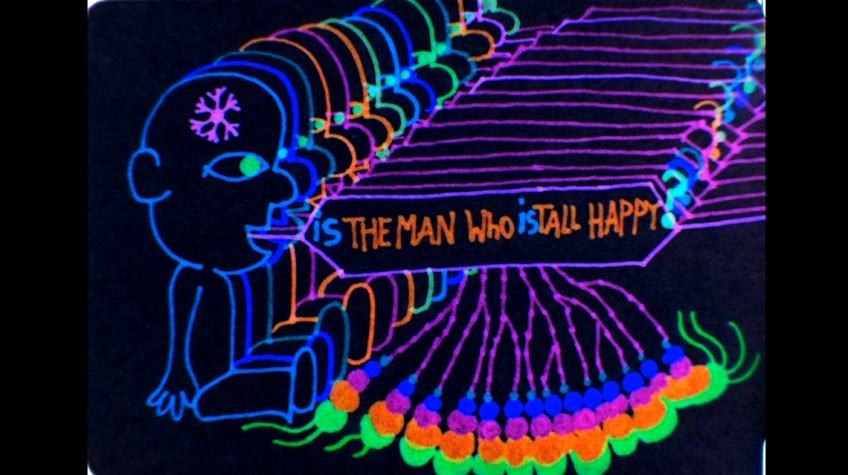 Michel the Adult: Comprehends the impenetrable concepts of a renowned linguist
Michel the Child: Scribbles feelings of frustration with his inability to properly convey any of his own ideas to a mature adult figure

To conduct an interview with Noam Chomsky and have his soothing, grandfatherly musings on linguistics and cognition not be the focus of your documentary is undoubtedly a sign of proficient filmmaking.

In the tradition of Gimme Shelter and Capturing the Friedmans, what the director sets out to film as the subject of his documentary becomes merely an entry point for a whole new course of exploration – in this case, a project based on Chomsky’s wealth of knowledge on, well, most things, takes the backseat to an exploration of Gondry’s understanding (or more accurately: commendably honest misunderstanding) of the words Chomsky speaks.

What originates as a conversation on the English language becomes infinitely broadened in post-production, where Gondry inserts narration confessing to confusion over certain ideas conveyed by Chomsky and clarifying that the answers Chomsky gives to his questions are often missing the point of what he’s trying to ask.

As the English language becomes more complex to the viewer over the course of an hour and a half, so too does the concept of English-as-second language, and we realize that perhaps the most fluid, multi-national conversations should be held in the universal language of cartoon animation.

Michel the Adult: Makes inevitably-pretentious direct reference to surrealism’s conception
Michel the Child: Immediately diffuses pretension by literally everything else in his curiously mature children’s movie

Likely the most Gondrian collection of images ever filmed, Mood Indigo is an adaptation of a novel by Boris Vian, an author who inhabited the middle ground between Andre Breton’s manifestation of unadulterated surrealism and Jean-Paul Sartre’s inaccessible intellect.

With Jean-Pierre Jeunet, Terry Gilliam, and Guillermo del Toro as contemporaries, Gondry swaps horror for unbearable sadness in his take on the adult fairy tale, telling the all-too-realistic story of a young man watching his wife slowly deteriorate due to a complicated and incurable illness.

Opposing the dollops of surrealism found elsewhere in his filmography, though, Gondry-via-Vian injects the unconventional into every moment of the film, from Colin’s invention of a piano-cocktail machine, to his wife’s floral-ingestion-based illness, to their underwater wedding ceremony.

Yet this isn’t the carefully-calculated, strictly-enforced surrealism Breton preached – this is the non-sequiturial nonsense overheard during preschool playtime filtered through two distinctive brains proficient in the language of adulthood, but neglectful of its rationality. Not even scenes of automatic writing feel like explicit nods to the established cultural revolution.