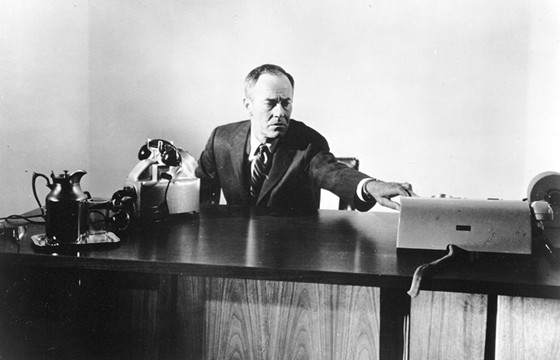 By the early-mid 1960s Cold War films were going for stark realism, none more than Sidney Lumet’s Fail Safe.

Shot as a real time documentary, Fail Safe follows the government’s response to a crisis after Strategic Air Command did not recall an American bomber that entered Soviet airspace and passed the “fail safe” point, meaning the crew were to drop their bombs and ignore any orders to abort the mission.

As the conscientious U.S. President (Henry Fonda) tries to work out a solution with Russian Premier, they face some really difficult decisions.

Walter Matthau leaves an impression as a cold minded nuclear strategist (based on real figures such as Herman Kahn and Henry Kissinger) who views nuclear war as a logical extension of technology and an ethical way to exterminate communism once and for all. 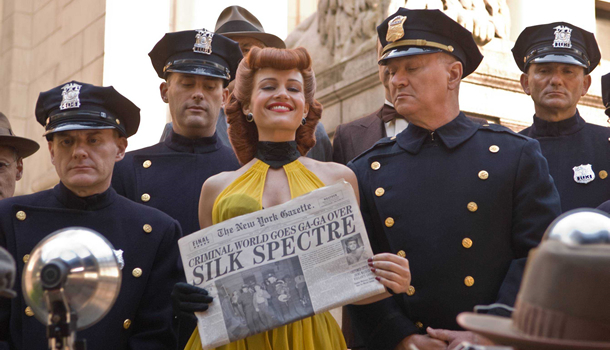 Zach Snyder’s adaptation of Alan Moore’s groundbreaking graphic novel Watchmen imagines an alternative 1985 where superheroes exist and America’s a quasi-fascist state with Richard Nixon in his fourth term as President. The graphic novel reinvented the superhero genre, exploring topics such as sexuality, damaged psyches, the joy of revenge , and deconstructing the fascist underpinnings of hero worship.

The panoramic opening credit sequence set to Bob Dylan’s “The Times-They-Are-A-Changin” features iconic images to amazing effect. The world stands on the brink of war and the government’s banned superheroes.

Zach Snyder, whatever one’s opinion on him as a director, stayed loyal to the source material. The set design and film noir directly model the original comic book art, although the action sequences are static at times.

Many directors were attached to the project over the years, most notably Terry Gilliam, who would’ve followed his own vision. Snyder’s adaptation spliced the Cold War into a pop cultural artifact, a clearing house for old anxieties.

As a standalone superhero film, Watchmen engages with history and the subterranean landscape of the past.

The Manchurian Candidate took a far fetched premise and made it believable. On one level, a not so subtle satire of McCarthyism; on another level an anticipation of the conspiracy theory culture to arise. And Frank Sinatra gets in a karate fight.

The story begins in Korea when a captured platoon of American soldiers are subjected to brainwashing by their Chinese captors. In a bone chilling sequence, featuring a 360 degree shot around what appears to be a gathering of lady gardeners, turns out to be a secret meeting of the Communist elite of China and Russia, a parody of a John Birch Society member’s nightmare. In a disturbing demonstration, they watch a soldier named Raymond (Laurence Harvey) murder at their command.

Harvey, in a tortured role, plays the scion of a political family known for their fervent anti-communism. Angela Lansbury as Raymond’s domineering mother remains one of the terrifying performances in screen history.

Although the soldiers had no memory of their trauma, it recur in their dreams. Bennett (Frank Sinatra), Raymond’s only friend in the platoon, starts to investigate the source of his night terrors and puts the puzzle together.

Shocking twists and turns intensify as the film morphs into horror Frankenheimer used wide lens shots to powerful effect, creating an intimate, claustrophobic relationship between the characters. Imitated many times, a must see. 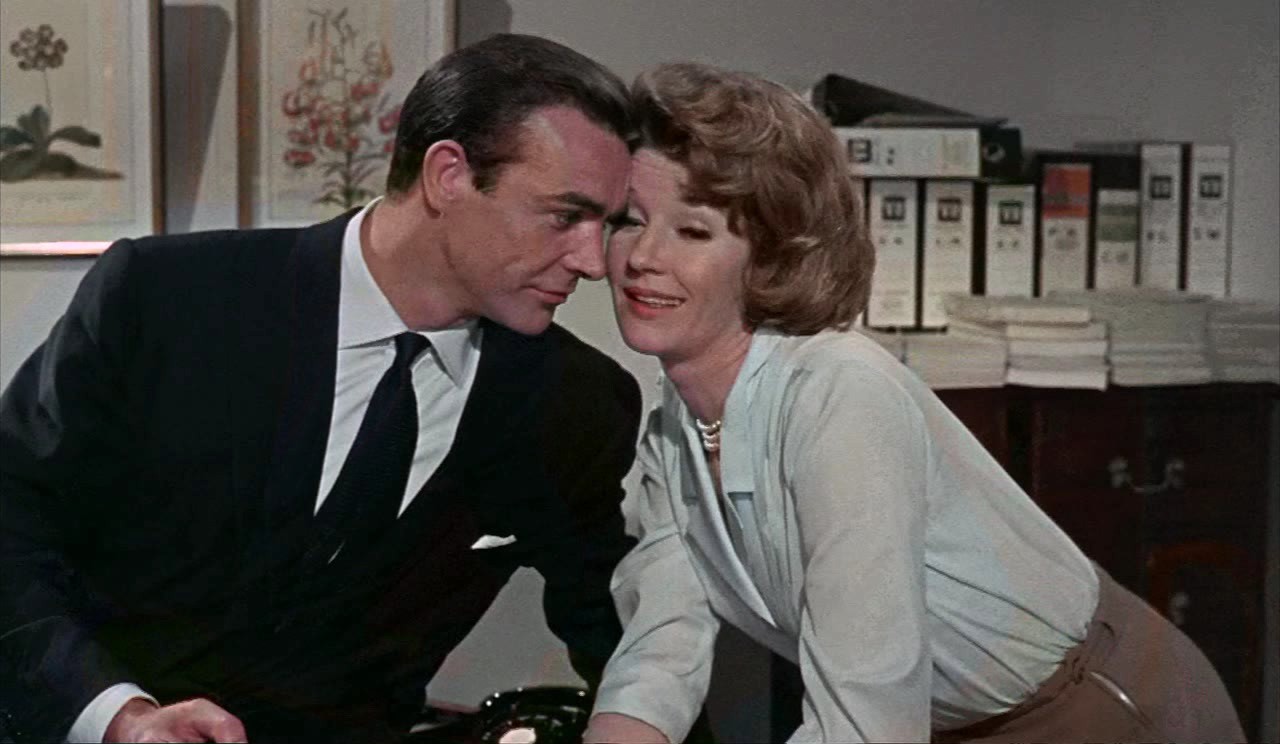 The second entry in the ongoing James Bond series, From Russia With Love stands out as a pure Cold War thriller, unlike the later films in the series which went for a “bigger is better” approach. The plot’s fairly simple, revolving around a decoder suitcase and an attempt to humilate the British Secret Service.

Ian Fleming’s creation made spy craft cool and sexy, converting the Cold War into an exotic battleground between all sorts of eccentric characters. Bond was the hero the Cold War called for: cold, charming, solitary, and adept at navigating a complicated psychological landscape. Connery played Bond as such.

Many of the motifs common to the future films were introduced: a nefarious henchman played by a frightening Robert Shaw, intrigue on the Orient Express, exotic locales, some romance, and some gadgets.

The Bond films forever changed pop culture in the same way Star Wars did in the 1970s.

Graham Greene’s morose tale of intrigue in post-war Vienna, The Third Man interrogates the morality of Europe after the war, a theme emphasized by the crooked cinematography.

With the city divided into four zones, American pulp writer Holly Martins arrives to look up his old friend Harry Lime. After Martins learns Lime is supposedly deceased, he investigates the fate of his friend and gets in way out of his depth, barely able to understand the world he just entered.

Orson Welles appears like a reborn Lucifer in his one scene. The scene speaks to the state of Western Civilization after the Second World War: life was cheap and there was money to be made. Greene’s pessimistic outlook, seemingly there to torment American optimism, comes out in full force.

Martins fails to achieve much of anything: he fails to get the girl and exits the story in confusion and melancholy. The naive morality of his pulp westerns stands no chance in the broken 20th century.

The classic theme set to a zither creates an otherworldly atmosphere, stepping out of one world into another, as movies should do. 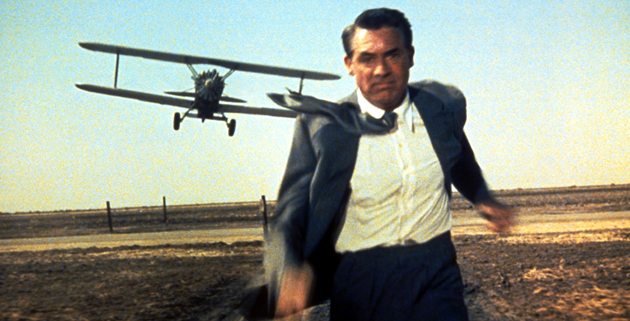 One of the most exciting thriller/adventures ever made, North by Northwest delivers one spellbinding sequence after another: the UN building, the crop duster, the auction, and the climax at Mount Rushmore. Hitch pulled out all the stops. An interactive textbook for Film Studies 101.

Cary Grant stars as a fastidious New York Ad Executive who finds himself the victim of mistaken identity and a bunch of bad guys on his trail.

Grant’s comical, dashing, and brave in one of the all time great performances (even though he had no idea what the script was about). Eve Marie Saint plays the seductive love interest with mysterious motives. James Mason plays the gentleman villain to the hilt.

As Bernhard Herrman’s soaring theme plays over the opening credits there’s no doubt a great movie will follow. Ernest Lehman’s script is full of wit and intelligence, for example, “In the world of advertising, there’s no such thing as a lie. There’s only expedient exaggeration.” One liners pop in steady beats.

The spy ring plot speaks to the fleeting nature of identity in the new Cold War world. Who or what determines identity? Society or the individual? Somehow your run of the mill Ad Man Roger Thornhill becomes the fictional construct of George Kaplan, a heroic secret agent who outsmarts his enemies. Hitchcock’s cinematic reality suggests there’s another world invisible to most, pulling the strings, while the rest live in ignorant bliss. 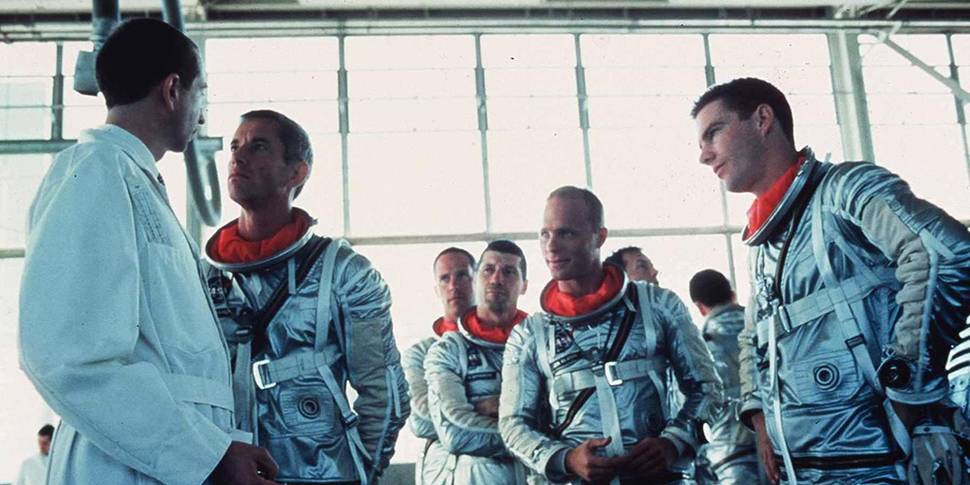 Much of the Cold War remains shrouded in darkness, a period many would just as soon forget. But the space race provided a respite from the madness. When Apollo 11 touched down on the moon all of humanity did join together for a brief moment of solidarity. The Right Stuff, based on the Tom Wolfe book, recreates the wonder the Space Age.

Phillip’s Kaufman’s adaptation redefined the possibilities of the historical epic. The Right Stuff is a representation of the past told with a sly wink, a bright tapestry of contradictions: the tone is satiric, yet sincere; reverent and irreverent; conventional and experimental; a mash up of fact and fiction; grandiose and intimate at the same time.

The early scenes at Edwards Air Force Base in the high desert of California, where test pilots flew the newest planes after the Second World War feels like a Western. Sam Shepard as test pilot Chuck Yeager drew upon the mythos of the genre in a unique performance. Caleb Deshanel’s dark hued cinematography suggests a faded past in the early scenes.

After the Russians launched the satellite Sputnik into earth orbit on October 12, 1957 the United States went into panic mode. Government bureaucrats, hilariously played by Jeff Goldblum and Harry Shearer, went to Edwards to recruit pilots to join NASA, those with the right stuff.

The astronauts were put on a pedestal by the PR machine at Life Magazine, and found themselves cast as celebrities hounded by the press Kaufman cast a troupe of San Francisco street performers to play the reporters, with locust sound effects whenever they appear.

Ed Harris stands out in all star cast as John Glenn. Dennis Quaid, Fred Ward, and Scott Glenn add distinction to their astronaut roles. The script also explores the wives of the astronauts and their struggle to live up to an image.

There are over 150 speaking roles in The Right Stuff, at three hours film moves along quickly with tone all its own.

1. Dr. Strangelove (Or how I learned to stop worrying and love the bomb) (1964, Stanley Kubrick) 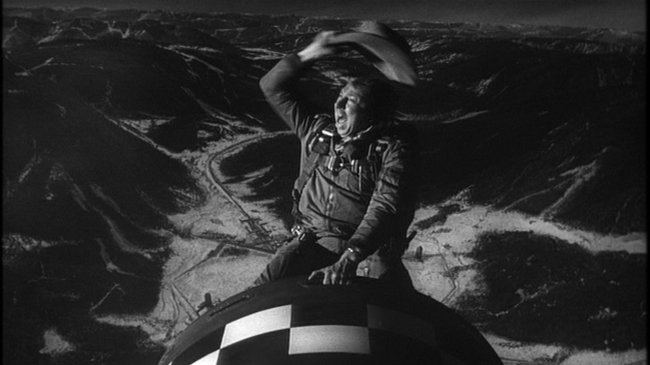 The importance of Stanley Kubrick’s Dr. Strangelove cannot be overstated. The film changed the way people saw the world. Other films might hit you over the head with Cold War horror, but Dr. Strangelove actually empowered its audience not by preaching, but by using ironic humor. Dr. Strangelove made a mockery of a system, proving satire can be the sharpest weapon.

Lines from the script are now part of the English language: “There’s no fighting in the War Room!” Or, ‘I wish we had one of those doomsday machines.” As a study of language and how institutions use it to manipulate, Dr. Strangelove provides ammunition on how to fight Orwellian rhetoric.

Kubrick initially set out make a serious Cold War thriller, as a New Yorker he worried about his city being Moscow’s number one target. After reading dozens of books on nuclear war strategy Kubrick found the subject matter so bleak to the point where it began to sound funny. So he hired hipster screenwriter Terry Southern to help with the script. Southern’s sly use of sexual innuendo took aim at the self destructive male ego and the stale conventions of Hollywood movies.

The plot’s nearly identical to Fail Safe. When a psychotic general orders an all out attack on the Soviet Union, an unprepared government apparatus has no clue. Everything goes wrong. As “Johnny Comes Marching Home” plays, Major Kong informs his crew they will all receive citations. The President and Soviet Premier argue over phone etiquette. And be sure to carry pocket change!

One of the most relentless comedies ever made, Dr. Strangelove remains essential viewing.