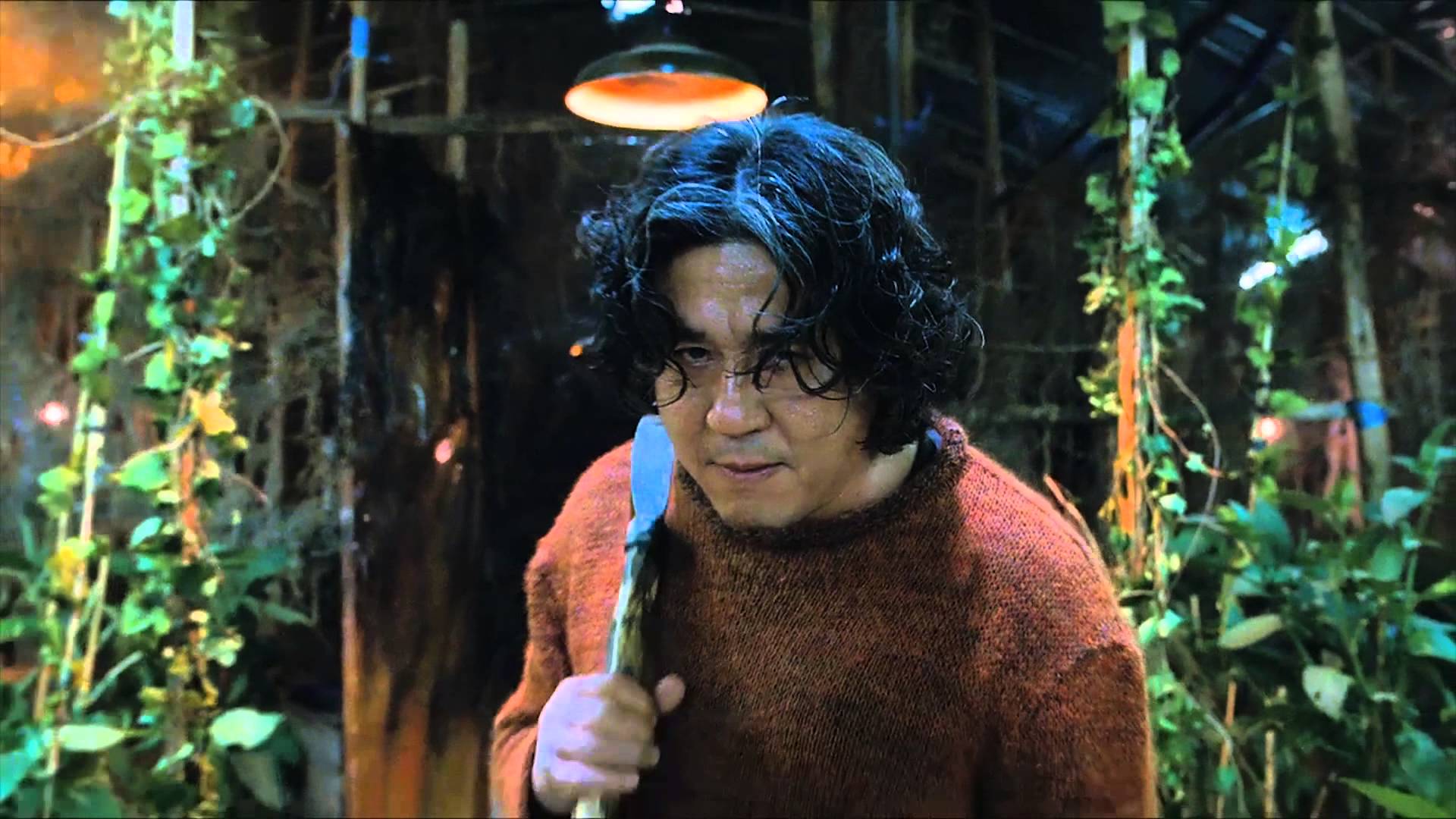 Since the beginning of the motion picture industry, there has been an obsession with violence. Before the adoption of strict ethical codes, early cinema featured a great deal of violence. Films such as The Great Train Robbery (1903), Intolerance (1916), and The Birth of a Nation (1915) all contained what could be considered a shocking amount of violence.

The adoption of the Hays Code vastly changed what could be depicted on screen, censoring anything that was deemed to be “morally objectionable”. World War II saw war films receive a little more leeway with their depiction of violence in order to demonize the evil enemies that the United States was battling.

The 1960’s ushered in the replacement of a moral code with a new ratings system governed by the Motion Picture Association of America (MPAA), who designated letter ratings based upon the movies age appropriateness. This and technological advances such as squib charges used to simulate the exit of blood allowed for more graphic depictions of violence.

One of the first pictures to really take advantage of this was Arthur Penn’s Bonnie and Clyde (1967). Since then, the U.S. film industry and worldwide cinema haven’t looked back, attempting to top previous productions and provide the audience with what they crave.

This list contains a little bit of everything, with at least one film from every decade between 1969 and 2011 and at least one from America, Italy, Hong Kong, France, Korea, Serbia, and Indonesia. It is a varied collection of genres; with some being critically hailed, many being labeled as exploitative and controversial, and some being banned in various parts of the world. 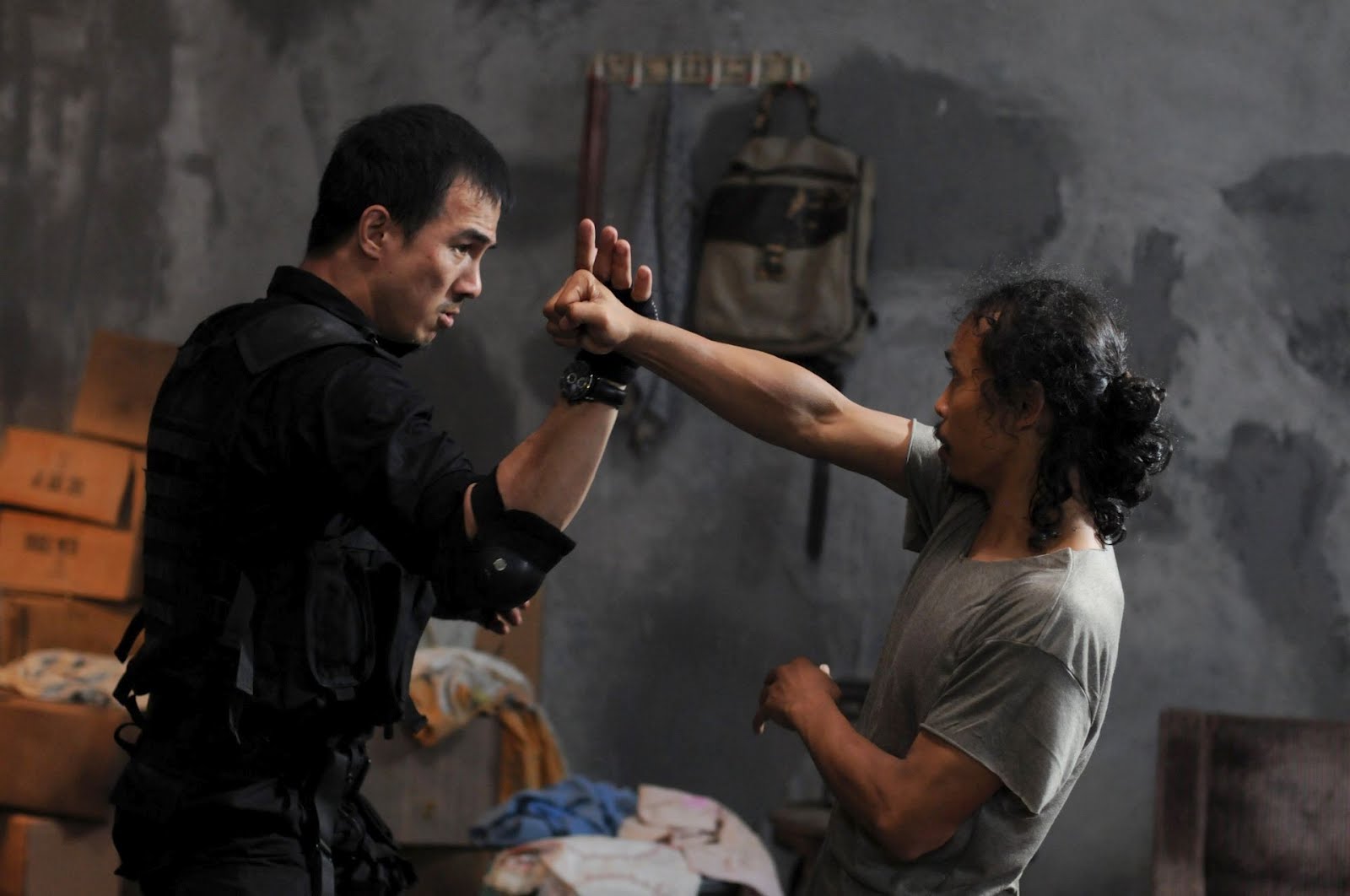 “When there’s nowhere left to run or hide… you fight or die”. This is an Indonesian martial arts film from director Gareth Edwards and stars Iko Uwais, who had both previously worked with each other on the 2009 Merantau.

The story is about a group of special tactics police officers who are sent into an apartment building in order to arrest a drug lord, but instead must fight for their survival when the place is locked down and the tenants are offered a reward for their deaths.

The movie is a pure adrenaline rush with bone crunching action and simply stunning fight sequences, pushing Uwais into the realms of being the next big action star. A fan created a cool infographic breaking down the kill count and how they all died, reaching a total just above one hundred. The Raid 2: Berandal was released in 2014.

This has been one of the top banned movies in multiple countries and is very controversial, being hated by some and loved by others. Jennifer (Camille Keaton) is a New York City writer who goes to an upstate cabin to work on a novel. There she runs into four men, who rape her and destroy her novel. Over the next few days she recovers and takes vengeance upon her attackers.

That basic synopsis doesn’t make this sound like it should be one of the most hated films in cinematic history. The issue is the rape scene or scenes, which last somewhere around thirty minutes of the movie.

For some it may be extremely difficult to watch and for some they may actually get off on the scenes, which is part of the reason exploitation cinema existed in the first place. Roger Ebert’s review found there to be “disturbing moral implications as the audience…seems to approve [of] the most horrific violence being visited on a woman’s body”.

The motion picture is often viewed as being misogynistic towards women. The rape scenes are very intense; if you can get through that portion then you may actually find this to be a feminist story.

The director wanted to make a “a film that was responding to his own personal outrage of the violence he encountered first-hand against women, and so he decided to make a film graphically portraying the horrors of such—with an ending that was feminist wish-fulfillment based on his own experience, as the heroine gets revenge on her attackers and makes them pay for their crimes. Viewed in this context, its prolonged scenes of rape and assault are not depraved or ashamed; they are deliberately painful and horrifying to watch, as they should be”. 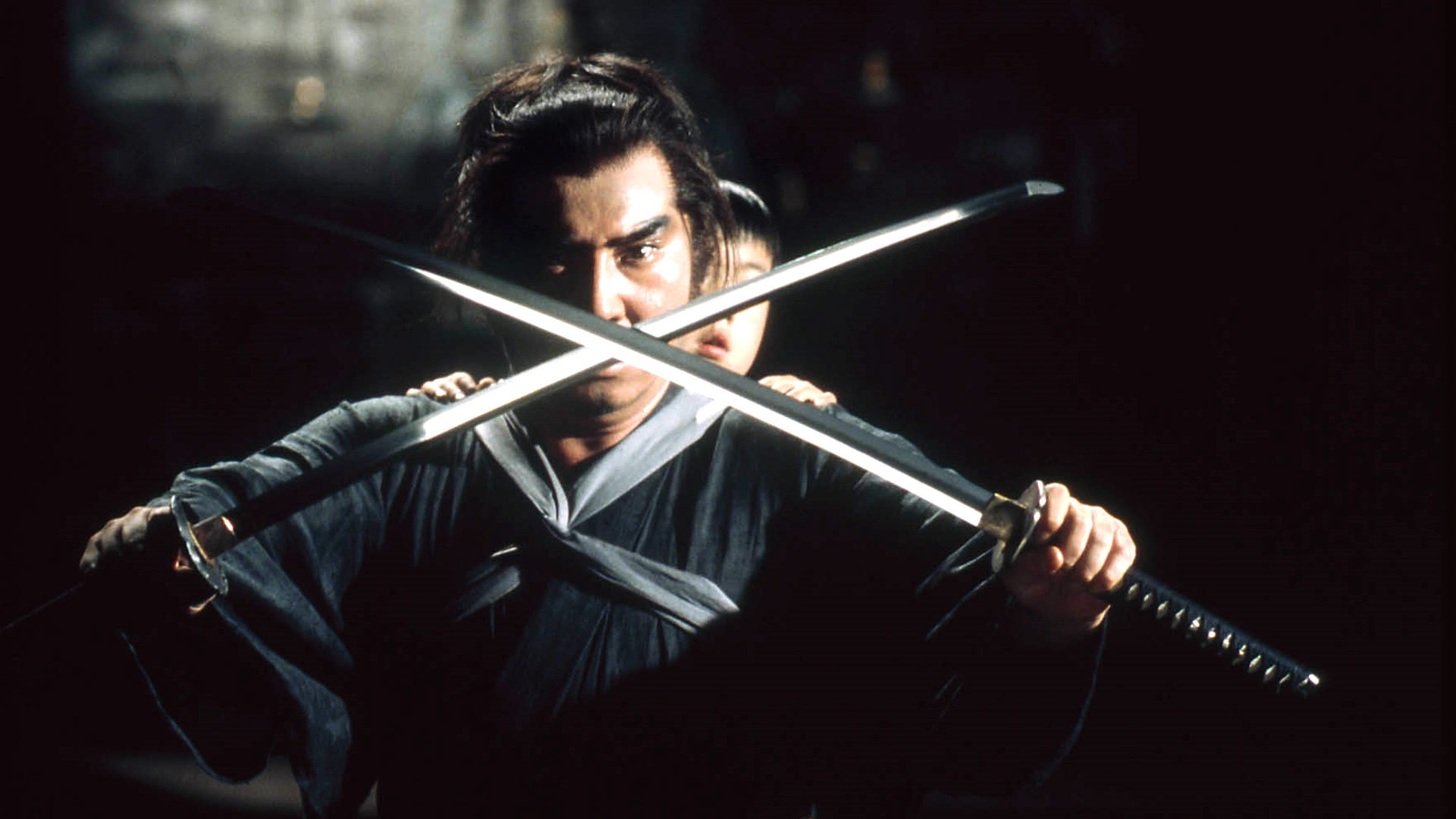 “He whips out his sword and relieves his victims of their heads!”. This declaration may actually piss some people off, but this is a totally must see bad ass blood splattering samurai action masterpiece. So for the uninformed viewers, why would this statement piss people off?

Well, this is actually the first two films of the Lone Wolf and Cub film series; it was condensed, re-edited, dubbed into English, and re-scored for an American release. So there are some purists that really dislike this version and feel that it bastardizes the series. The fact remains that this version was most Americans first introduction into this series and the world of crazy samurai spraying blood movies.

The story involves Ogami Itto and his son Daigoro as he walks the land with his son in a baby cart, looking for samurai jobs and battling enemies that are trying to kill him. He was originally the head executioner for the Shogun, until the Shogun went mad and starting having people killed. Itto’s wife was killed during an attempt to eliminate Itto, the shogun then expected him to swear his loyalty or commit suicide, so he turned against the Shogun and became an assassin for hire.

This is simply a totally bad ass movie. The American edit is super fast paced and filled with a ton of bloody action, featuring eleven fight scenes, tons of spraying blood, and splitting heads. All of the fight scenes are memorable and Lone Wolf always has some type of tricks ready on his baby cart.

The narration by the child and the new score are perfect for a dubbed adaptation and are a good fit for the time when this was released, the synthesized score is very reminiscent of the sound from John Carpenter films and the Phantasm horror series.

The movie was highly influential on many filmmakers, most notably Quentin Tarantino and John Carpenter. Tarantino has incorporated the super violent spraying blood into Kill Bill and many of his other productions.

This film is the one that the bride’s daughter watches when she goes to bed in Kill Bill: Volume 2., Carpenter used some similar imagery from this in Big Trouble in Little China, mainly the three guys wearing the straw hats. If you like action and violence, then this is essential viewing. There are also six films from the original Lone Wolf and Cub series, along with a television series and the comic that they were based upon.

“More exciting than a dozen Die Hards”. The story involves Inspector “Tequila” Yuen (Chow Yun-Fat), who is looking for revenge against the Triads after his partner and an undercover cop were killed in a gunfight with a group of gangsters. He must eventually team up with Alan (Tony Leung), who is an undercover cop working for the Triad leader played by Anthony Wong. The films climactic ending takes place in a hospital with a fierce gun battle, where they must try to save the patients while battling mob hit men.

This was director John Woo’s final Hong Kong film before moving on to Hollywood, he had success in Hong Kong with the Better Tomorrow series, The Killer, Bullet in the Head, and Once a Thief. This was by far his action opus, creating quite possibly the greatest action scenes put to camera.

There are three main action sequences that take place; one in the beginning, one towards the middle, and then basically a thirty minute gun battle in a hospital that gets completely destroyed. They are all memorable for various elements. Somewhere near 80 people get killed in this movie, it’s insane. There were also three great main actors at the top of their game in Yun-Fat, Leung, and Wong.

The production sounded pretty grueling. It was mostly shot in an old Coca-Cola plant, doubling for the warehouse scene, the hospital, and whatever else was needed. They had issues with local gangsters trying to get protection money and threatening to shut down production and destroy equipment.

For the hospital scene, they were shooting simultaneously with a second unit inside and outside the building. The shooting schedule was going anywhere from eighteen to twenty four hours a day for four to five days, with the hospital scene taking forty days to complete.

It didn’t do as well as previous Hong Kong films, but has a strong cult following among Hong Kong cinema, action films, and fans of the director and actors. If you like any of those then this is a must see.

“In the media circus of life, they were the main attraction”. This is director Oliver Stone’s brilliant satirical look at the glorification of violence and serial killers in pop culture and the media. The story involves a pair of lovers that had been victims of traumatic childhood events and abuse, who become mass murderers and end up becoming glorified by the media.

It features some rather unique camera angles and shooting styles, mixing between black & white, filters, animation, various types of film stock, and special effects. The soundtrack is also notable, featuring an eclectic mix of songs ranging from Leonard Cohen to Nine Inch Nails.

The film did well at the box office and received decent reviews, but had many issues regarding the level of violence that was portrayed. It has to be noted that two other movies on this list show up in this, clips of The Wild Bunch and Scarface appear on television when Mickey and Mallory are in a hotel.

The initial cut was rated NC-17 and Stone had to pare down the violence in order to get an R rating. There is a great deal of violence, which includes a body count in the hundreds, spraying blood, lost body parts, media dramatizations of murder scenes, and a huge prison riot and escape that contains the then controversial bullet hole through the hand sequence and the warden’s head on a pike. EW ranked it in a list as the eighth most controversial film of all time. 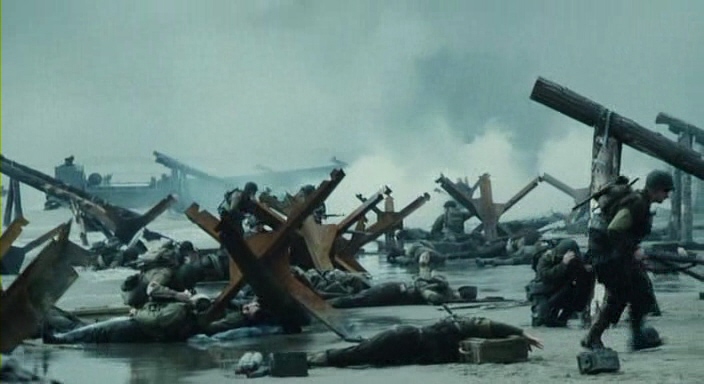 Steven Spielberg’s epic WWII story about a group of soldiers sent behind enemy lines, in order to retrieve a paratrooper whose brothers had been killed in the war, is absolutely riveting and pulls no punches. The war visuals are violent and realistic.

Only one scene in this film needs to really be mentioned, the opening D-Day invasion of Normandy on Omaha Beach that runs just over twenty minutes. It is one of the most realistic, brutal, and heart wrenching battle scenes ever filmed. We witness soldiers being shot and killed, set on fire, body parts being blown off, a man picking up his severed arm, intestines hanging out of a soldier clinging for life, and a blood soaked ocean after its all over.

Most of it is shot in a shaky cam style which further adds to the realism of the situation and makes the camera seem like the viewpoint of one of the soldiers at certain times. The overall kill count for the picture ranges between 165 and 255, but around 2,000 allied soldiers were killed in that battle alone.