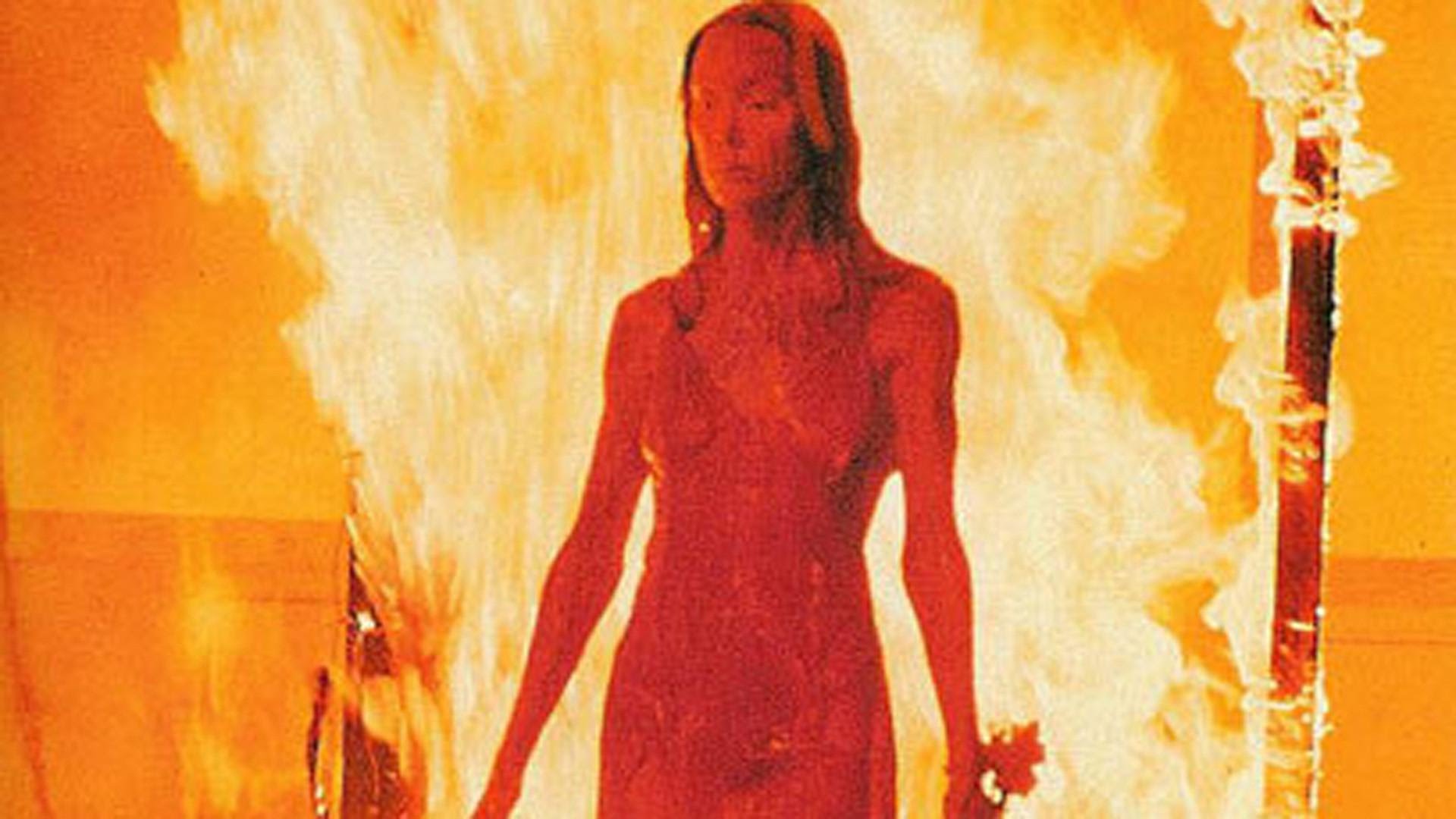 Suspense is the scene-by-scene concentration of Aristotle’s Fear and Pity. We know something terrible is about to happen, we can’t do anything about it, but we’re compelled to keep watching. Suspense, being heightened drama, is a central and cathartic component of the thriller.

Brian De Palma began making films in the sixties, under the influence of Brecht, Hitchcock, Godard, pop music and political paranoia. He’s had long-standing partnerships with editors Paul Hirsch and Bill Pankow, cinematographers Vilmos Zsigmond and Stephen H. Burum, and composer Pino Donaggio, all of whom have contributed enormously to his aesthetic.

But as director, often writer and sometimes producer, the modern Master of Suspense remains his own brand. You always know when you’re watching a Brian De Palma film, and nobody else makes ’em quite like he does.

A recurring motif in suspense, and De Palma’s in particular, is dead space – the kind of common, impersonal, usually public locale occupied by strangers in close proximity. Shopping malls, parks, elevators and escalators, train stations, motels – any of these might be a great place to meet a lover, or a maniac.

Massive, devastating spoilers for every film. 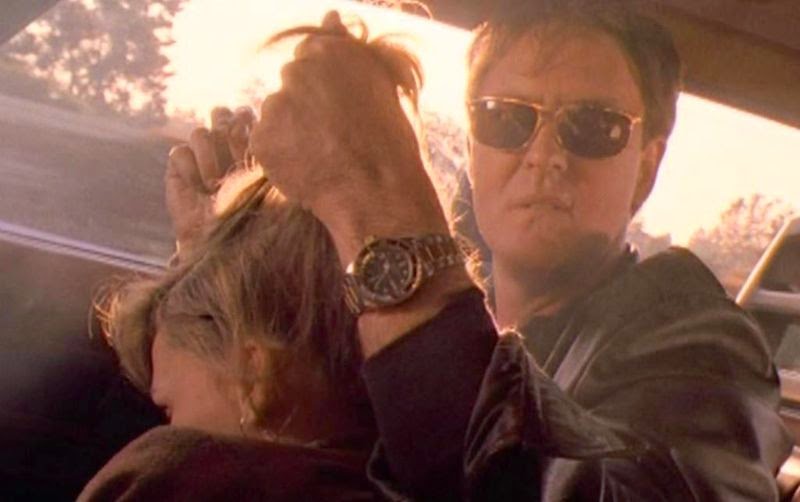 Before Nicolas Cage there was John Lithgow, whose own brand of “mega-acting” sets the tonal barometer for this demented, schlocky thriller. Raising Cain is a series of rugs being gleefully pulled out from under your feet by a filmmaker who has just made Bonfire of the Vanities and has nothing to lose. It’s brilliant.

Lithgow has a ball playing a child-kidnapping madman whose evil twin is really a split personality, and whose dead father split personality is really his still-alive actual father, who’s also mad. Meanwhile Lithgow 1.0’s wife (Lolita Davidovich) has an affair with her old flame (Steven Bauer), a hunk in a sleeveless V-neck cardigan, and her vivid dreams-within-dreams give her a slippery grip on this tenth-year-of-a-soap-opera version of reality.

The climactic sequence begins with the line “You’re gonna kill somebody with that sundial!” and is structured according to the Mouse Trap formula (the board game, not the play). Disparate elements are wittily introduced – scalpel, bystanders, pram. Geography is established – motel walkway, elevator, parking lot. Characters’ objectives are set – patricide, rescue, escape. And when the trap is sprung, the perfectly choreographed chaos unfolds in glorious slow motion.

At times Raising Cain plays like a TV movie directed by its own main character(s) but that’s only to trick you into forgetting that it’s directed by Brian De Palma.

This is summarised by a four-minute Steadicam shot in which Frances Sternhagen leads a walk-and-talk through a police station – she keeps taking wrong turns while the cops steer her in the right direction. Throughout the film, De Palma points your expectations, sympathies and fears one way only to head off in another, but despite the madness on display he’s always in complete control.

By the end we’re primed for anything, and the thrill of the climax comes from De Palma’s precise timing and orchestration as he resolves the film’s myriad conflicts in a single scene.

After Casualties of War underperformed (despite critical praise) and Bonfire of the Vanities flopped (having received none), Raising Cain was De Palma’s conscious return to the twisty-turny thrillers that made his name. He did the same thing ten years later, following a lukewarm response to Snake Eyes and the summary dismissal of Mission to Mars.

Mission to Mars is a pretty average film, but there’s a reason it was Cahiers du Cinéma’s fourth favourite release of the year 2000. That reason is not Gary Sinise’s haircut.

Sci-fi/fantasy/theological bookends notwithstanding – and they don’t – the plot is a pre-run of The Martian, with Don Cheadle stranded in a makeshift allotment on the Red Planet instead of Matt Damon. (Red Planet is the one with Val Kilmer.) A rescue mission is launched, comprising Sinise, Jerry O’Connell and husband-and-wife Tim Robbins and Connie Nielsen.

With far too much preamble and not enough urgency, the first third of the film is hard work to get through. Then De Palma wakes you up with a tiny, out-of-nowhere shock – a crumb-sized meteorite punctures the hull of the spacecraft (and O’Connell’s hand) and sets off a catastrophic chain of events covering nearly all the space movie requirements: our heroes scramble against the clock to solve technical, physical and ethical conundrums as they lose gravity, oxygen, fuel, their ship and finally each other.

The second half of the sequence finds them adrift above the Martian atmosphere, tethered like mountaineers without a mountain and trying to latch onto some kind of module which they can pilot to the surface. Success for the team requires sacrifice – and this is where De Palma’s grasp of melodrama comes into play. In the void of space, with virtually nothing to film but the actors’ faces, he pushes the suspense as far as it will go – and given the film’s dreary first act, certainly further than you suspected it could.

There are some silly elements. The astronauts’ computers seem a little too aware of the human drama (at one point announcing “point of no return”), the dialogue could be politely referred to as workmanlike, and Ennio Morricone’s mostly excellent score is given to occasional Apollo 13-style heroic horns. But overall this sequence is much stronger than the film’s critical and commercial failure would suggest.

Mission to Mars deserves half an hour of your time.

In the best De Palma film of the nineties, corrupt Atlantic City detective Rick Santoro (Nicolas Cage, the new John Lithgow) witnesses a political assassination at a boxing match and soon has reason to suspect conspiracy. His Rashomon-style investigation sifts through conflicting accounts and unreliable images until he discovers the truth, as well as the limits of his own fairly latitudinous ethics.

The film opens with a twelve minute Steadicam sequence pulling Cage through colour-coded backstage corridors, up stairs, down escalators, into the boxing arena and around the ring, eventually cutting to his point of view only when the assassin’s first bullet is fired.

It’s not quite a single take, but most of the cuts are well hidden and the effect is the same – De Palma creates suspense by restricting our perspective and distracting us with spectacle even as he demands our attention, while David Koepp’s script establishes every plot thread and clue, like the “blood money” which reappears throughout the story as thematically required.

In Snake Eyes the camera is free to roam (or snake) around the labyrinthine hotel-casino-arena complex, passing through walls and ceilings and replaying scenes from different angles – sometimes side by side, via split screen or on a bank of monitors. Other times, the camera occupies a first person perspective, but even subjective truth is elusive – we slip out of one character’s point of view in mid-take.

The opening set piece makes us eye witnesses to a scene that will be deconstructed and reconstructed repeatedly over the course of the film. But even on its own merits, this is a great piece of filmmaking, in content as well as technical achievement. It certainly eclipses the five minute prologue of (and best reason to watch) Bonfire of the Vanities, which really was done in a single take. Snake Eyes cheats a little – but what do you want? It’s Atlantic City. 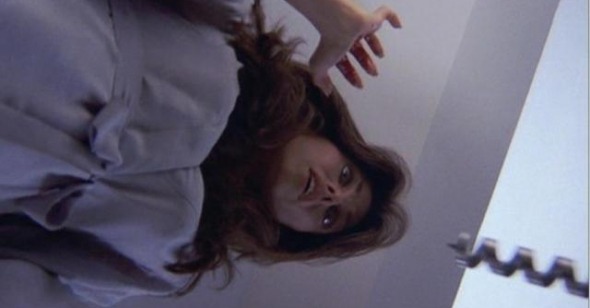 The story goes that De Palma was fed up with critical outrage over his films’ perceived excess, particularly a certain chainsaw-related set piece in his Shakespearean coke-and-disco epic Scarface. He retaliated with Body Double – a tale of voyeurism, dual identity, extreme violence and pornography – to show the Mary Whitehouse crowd what excess really looked like.

In the film’s central set piece, Jake peers through his telescope as Gloria returns home and secures her house, not realising the Indian is already upstairs cracking her safe with an enormous power drill. Jake tries to phone in a warning, which makes things worse – instead of hiding, the Indian attacks Gloria with the drill. Jake runs over to the house just in time to get mauled by a dog and utterly fail to save the damsel in distress.

Scarface introduced the power tool as a hair-raising murder weapon, but Body Double pushes the concept even further from your comfort zone. This time the victim is female and the weapon overtly phallic (De Palma said he hadn’t intended the symbolism, but “it could be construed” – perhaps by the shot of the drill bit between the killer’s legs?). There’s even a moment of outrageous gallows humour when the power cord gets pulled out of the wall socket and the killer has to plug it back in.

Throughout the scene, De Palma winds you up like a toy soldier. The impulse to laugh in disbelief is almost as strong as the impulse to look away – although, as with Scarface, the most graphic carnage is kept tastefully off-screen.

For further proof of De Palma’s filmmaking prowess, see Body Double’s later sequence in which a music video for Frankie Goes to Hollywood’s “Relax” is woven audaciously into the narrative.

6. Breaking into Langley in Mission: Impossible (1996) 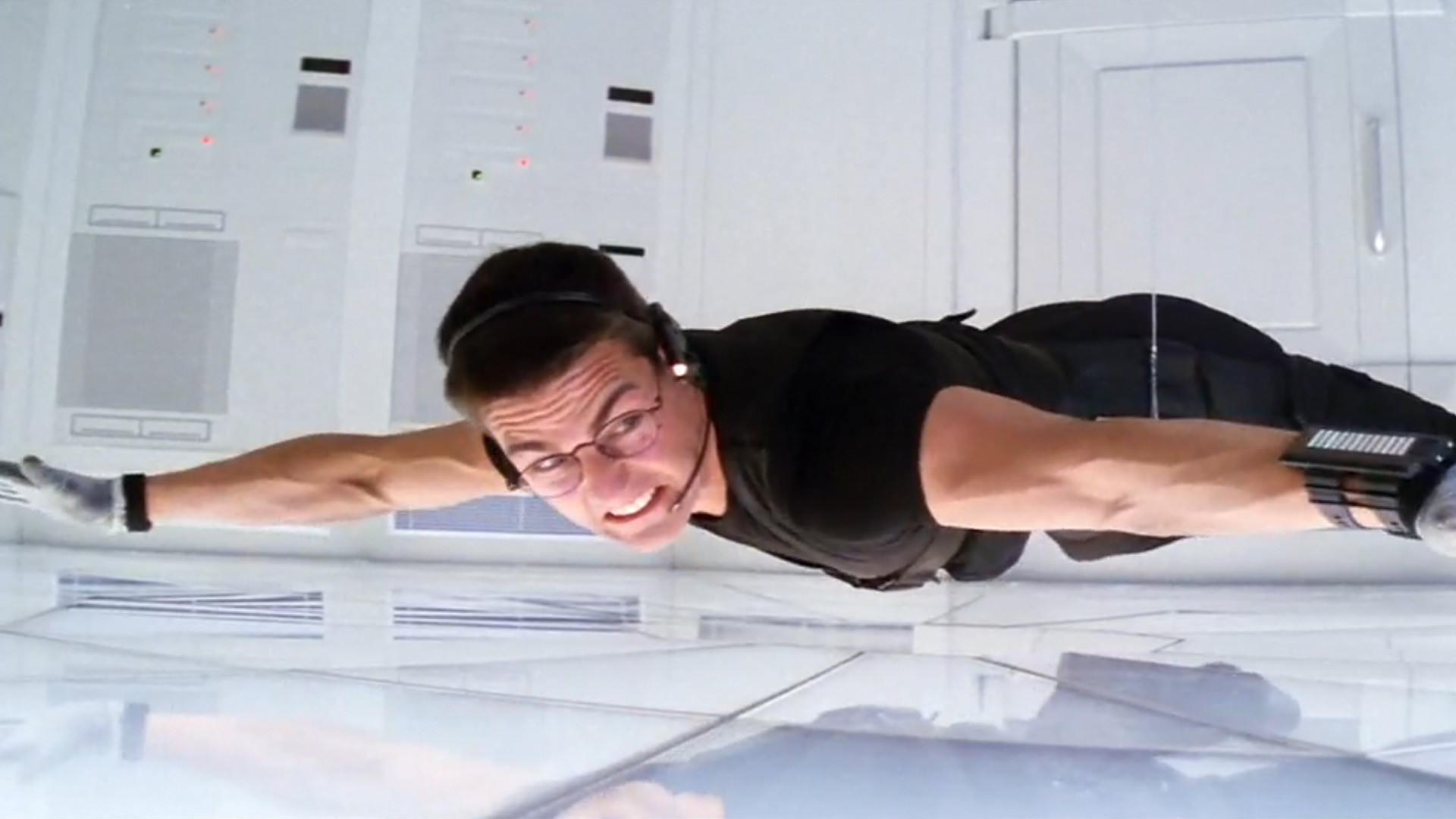 The high tech, stunt-propelled heist, with überspy Ethan Hunt (Tom Cruise) entering some booby-trapped vault or other from above, has become the signature of the Mission: Impossible franchise. Four sequels and two decades later, De Palma’s iteration is still the best. It’s also a classic moment of nineties action cinema despite being devoid of gunplay, explosions, car chases and/or punching.

It’s basically a guy in a plain white room, trying to convince the room that he isn’t there.

Forced to prepare the film without a finished script, De Palma designed the key set pieces himself while Steven Zaillian, David Koepp and Robert Towne filled in the blanks. This make-it-up-as-we-go approach does occasionally work, as with Casablanca and Die Hard. Here, the plot is complex but not messy or chaotic, and De Palma has plenty of room to craft his own brand of suspense on what was then his biggest ever budget.

De Palma’s trademark off-canter angles and split diopter lenses are used sparingly, with the emphasis squarely on the physical obstacles in the scene. There are visual devices for each. Warning against body heat and counting degrees, a digital thermostat functions like the timer on a bomb.

The floor’s sensitivity is demonstrated with a drip of condensation from a cup; during the heist, with Cruise suspended prone just inches above the sensors, a bead of sweat clings to the rim of his glasses. Finally, a falling knife provides the scene’s last-minute, slow motion grace note.

This is certainly his most mainstream work but, as anyone who remembers the cinema audience’s rapt, breath-held silence will be able to attest, it’s still full strength, undiluted De Palma.