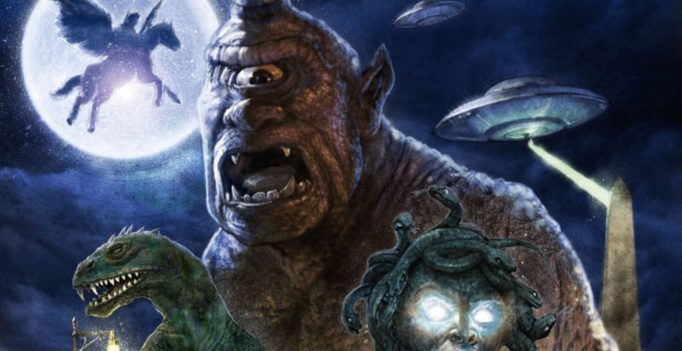 Arrow Films newest release is the Blu-ray of the 2011 documentary titled Ray Harryhausen: Special Effects Titan. It is a comprehensive and delightful documentary that tells the story of the highly influential career of Harryhausen and his influence on the current generation of directors and the world of modern-day special effects.

It tells the chronological account of his career and his amazing stop motion animation and the film that they were in, using a combination of interviews from Harryhausen, photos, old test footage, concept art, original props, film footage, and interviews from other prominent directors, authors, and historians.

Some of the directors include Peter Jackson, Steven Spielberg, James Cameron, Terry Gilliam, John Landis, and Guillermo Del Toro. They talk about how his special effects inspired them to create films and also how it influenced them in their own movies, including the fact that Harryhausen created the way that we all think that dinosaurs move.

This is a truly great documentary and it is relevant for fans of Harryhausen’s work and people interested in the history of motion pictures. It is a true love affair that took over ten years to finish.

The main downside to this release is the fact that it had been previously available to at least watch on Netflix and other platforms and I do believe that there was a DVD release that may have been limited to the UK region.

To make up for that, the release contains a fairly decent amount of extras that clock in at around two hours. This includes an in depth audio commentary with the filmmakers, an interesting segment involving the unpacking of some of his miniatures being stored in a museum, interview outtakes and deleted scenes, additional interviews from Edgar Wright, Peter Lord, Rick Baker, and Simon Pegg, screening Q&A’s from Paris and London, super 8 footage from the set of Sinbad, and trailer reels from his films.

For fans of Harryhausen, this will most likely be a must own even if they had seen the documentary before. The extras are more than enough to delight hardcore fans of his work.

For anyone else that is a fan of the history of cinema or special effects, then this is essential viewing and a must own. It is an important piece of work that focuses on the career of a man who became a legend and a pioneer in a field of the moviemaking business where most were often forgotten.

While many fans can’t name the director that made the film, they can instantly recognize that the special effects where done by Harryhausen.