Colour, in film, has gone on quite a journey: from the trivial and fanciful use of colour in early cinema, to the tonal and emotional, then the realistic and over-sober, and back to its comfortable middle-ground of visceral engagement.

The first uses of colour came in the form of film tinting, whereby a part of black and white film would be hand painted – whether that be a whole scene, only a frame, or even a single object.

This quickly become a popular way of setting the tone of a scene: by tinting the frame orange a filmmaker could show a scene was hot, or tinting it blue could show cold, etc. From there, filmmakers developed upon this new technique and began using colour to trigger emotional responses from their audiences. This tinting became so popular some film manufacturers started selling pre-tinted film stock.

However, with the development of true colour film – which could, quite accurately, render real life in full colour – the use of colour tinting slowed, and with it the use of colour pallets to represent emotion. Thankfully, this reserved use of colour died down, and today almost all directors/cinematographers use colour to help tell their stories.

Below is a list of notable films which use colour to represent a change in narrative, and/or emotion. 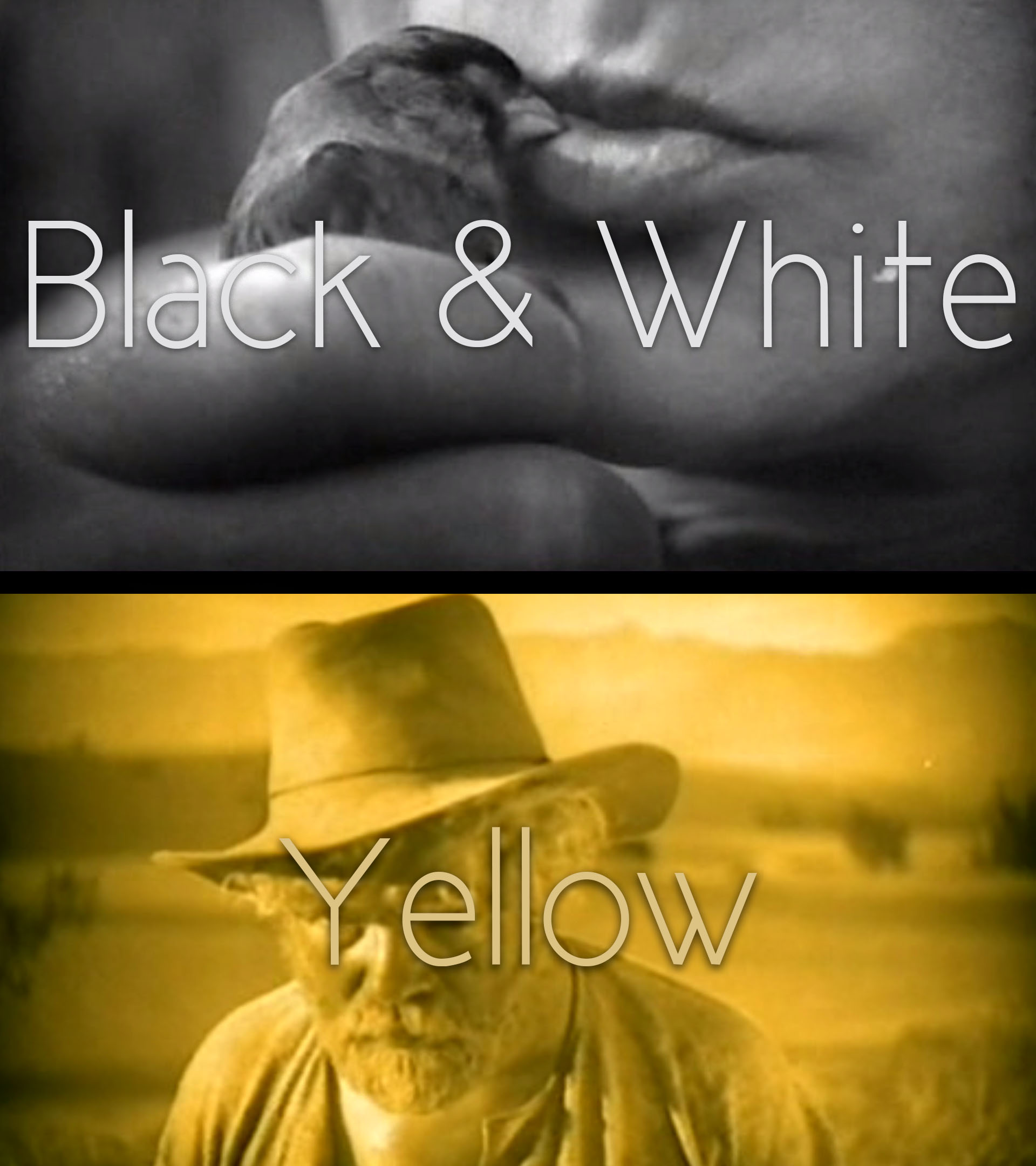 Greed is a film which takes full advantage of all the technological aspects of filmmaking, to convey a story; this silent film is very much a testament to the scientific nature of early cinema – the lust for a formula. The film was adapted from an 1899 novel called McTeague: A Story of San Francisco – by Frank Norris – and was directed by Erich von Stroheim.

The film follows the story of John McTeague, from his life as a miner in California, to his career as a dentist in San Francisco. Throughout McTeague’s journey he becomes greedy and money obsessed, eventually driving him to murder his wife, for the $5,000 she won in the lottery – and refuses to part with. Now an outlaw, McTeague flees back to California.

The use of yellow colour tinting is particularly striking. From the start of the film, objects with some relation to wealth – e.g. gold, and coins – are tinted a bright yellow; as McTeague becomes consumed by greed, the use of yellow increases; in the film’s climax, Stroheim tints the entirety of the frame bright yellow, as McTeague rides into the desert, fleeing the mess he’s made due to his own greed.

Though somewhat outdated, the film is an obvious example of how to draw a line between a narrative and an image, making it a very useful asset to everyone interested in the field of cinema. 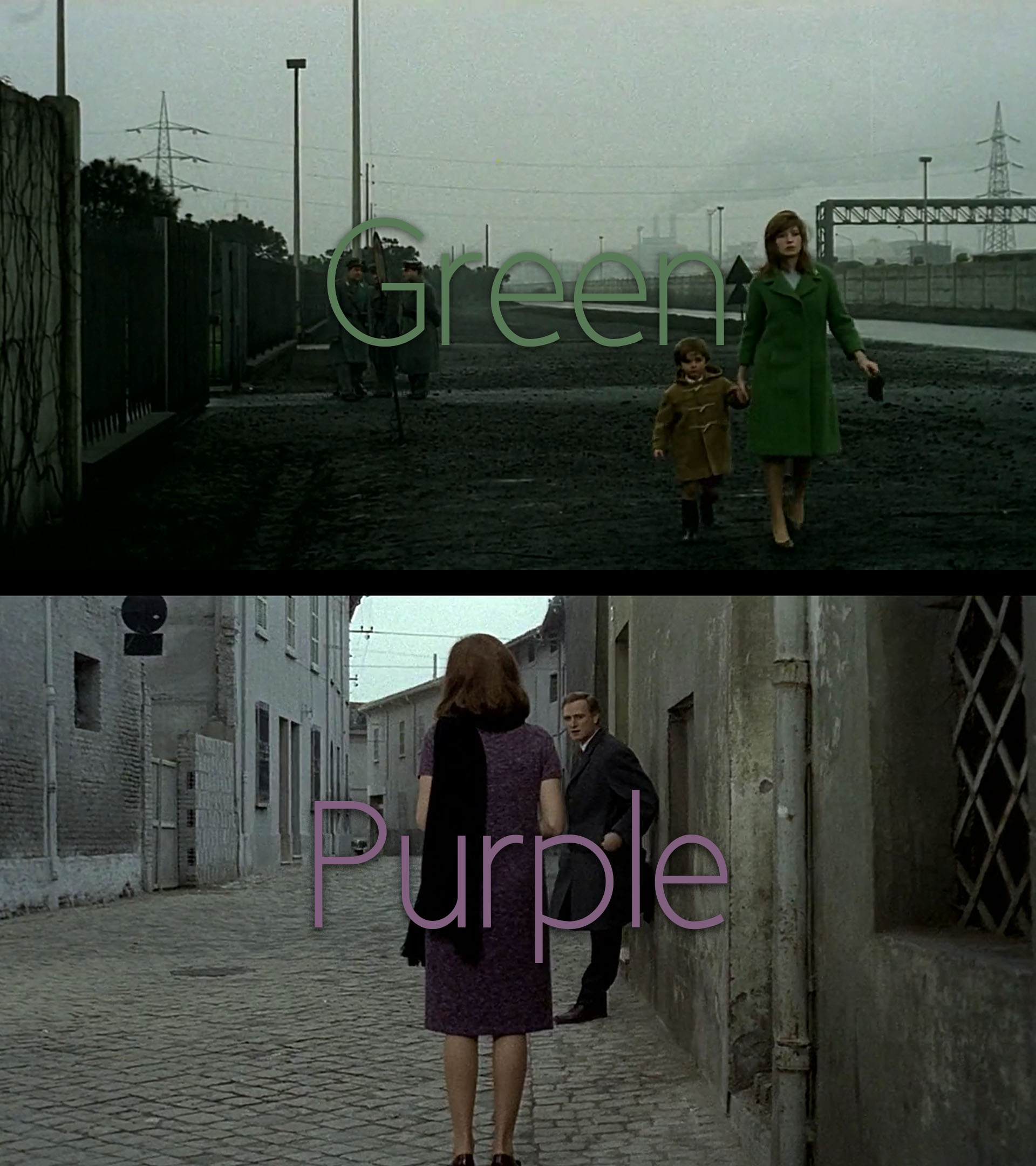 Michelangelo Antonioni’s first colour film Red Desert sets the bar for the use of colour in film. Antonioni balances acute chromatic symbolism with realistically dull background colours, to create a chilling and relatable portrait of a neurotic young woman (Giuliana), living in an insufferably industrial world.

Throughout the film, many colour motifs are established; several unexpected connotations are created – proving how adaptable film language really is. Though, on first viewing, it might go unnoticed, one instance in which colour symbolises an important narrative change is the difference between the colour of Giuliana’s dress in the opening scene, and a later scene with Corrado (an eventual love interest).

In the first scene, Giuliana walks towards her husband’s place of work – a petrochemical plant – with her young son. In this scene her dress is a striking green. In her scene with Corrado they both talk of their unfulfilling lives, which creates an immediate affinity between them, here she wears a dress of deep purple.

This change may seem superficial at first but, throughout the rest of the film, such an importance is placed on colour – for instance, the dialogue in which Giuliana’s son asks her ‘Why is that smoke yellow?’, to which she replies ‘Because it’s poisonous’ – that it becomes hard to ignore.

Moreover, the relationship between her home life and the colour green is reinforced in several scenes, including the closing scene: in which she walks with her son, near her husband’s plant, wearing the green dress from the film’s opening. 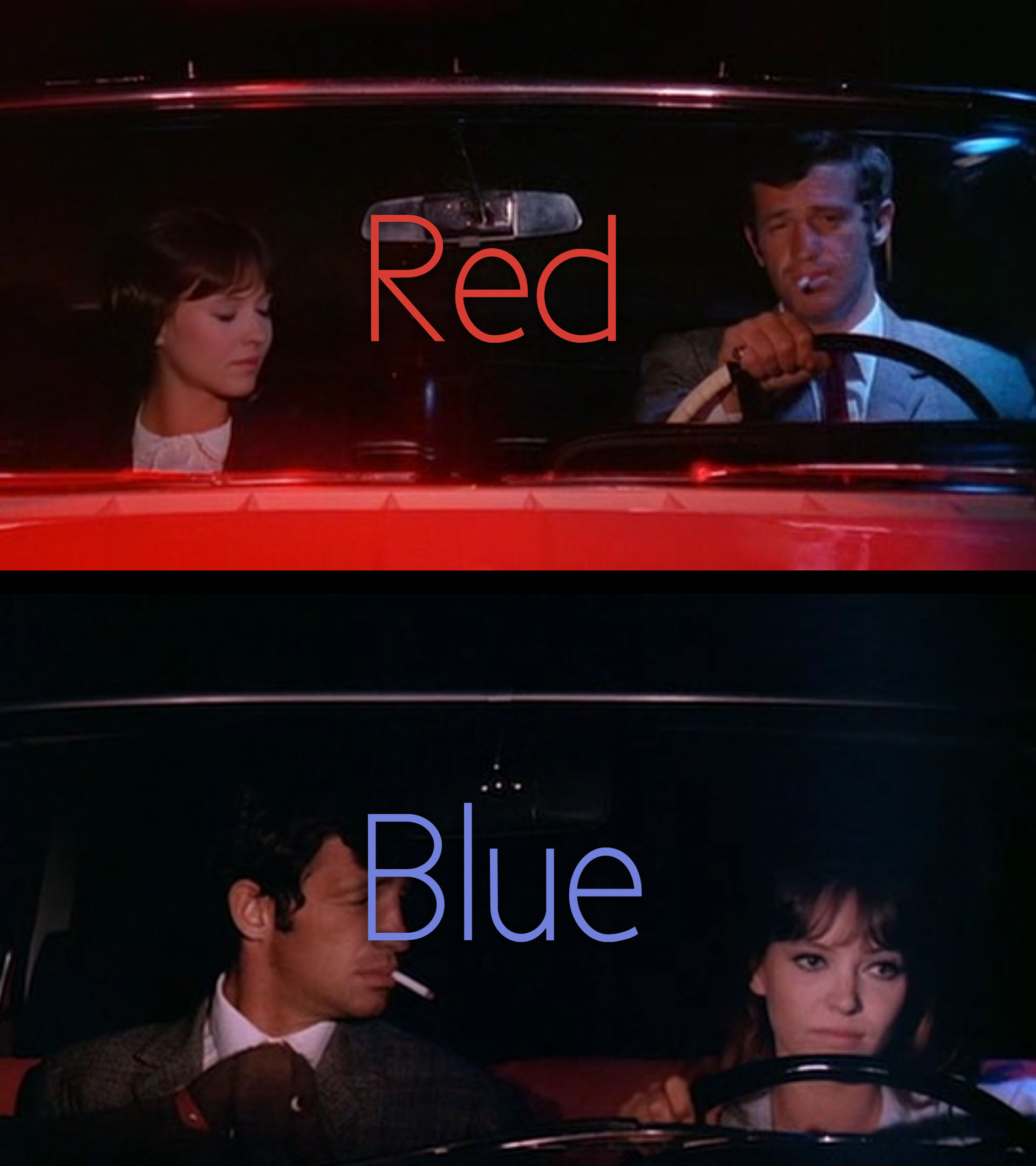 Pierrot Le Fou focuses on the criminal escapades of two lovers, Pierrot and Marianne. In this film, the use of colour is overtly charming; director Jean-Luc Godard uses a triadic colour pallet, to set a playful tone, and create some modestly beautiful imagery. Within this seemingly unaffected colour pallet, Godard – by instinct, if nothing else – creates an emotive relationship between two prolific colours: blue and red.

Throughout the film, the lead characters, and their surrounds, are constantly switching from red to blue. Unsurprisingly, upon closer inspection, these changes correlate strongly with the power, and dominance, of the character being shown: when a character appears blue, they seem aloof or calm; when red, they are more passionate or affectionate.

One exemplary colour switch occurs between two journeys Pierrot and Marianne make in their car. In each scene, as they drive through the night, they pass beneath red and blue streetlamps – red occupying the left of the frame, blue occupying the right. In the first scene, Marianne has not get been introduced, meaning the audience don’t yet know her domineering tendencies: in this scene she is shown on the left of the frame, passing time and time again under the affectionate red lighting. 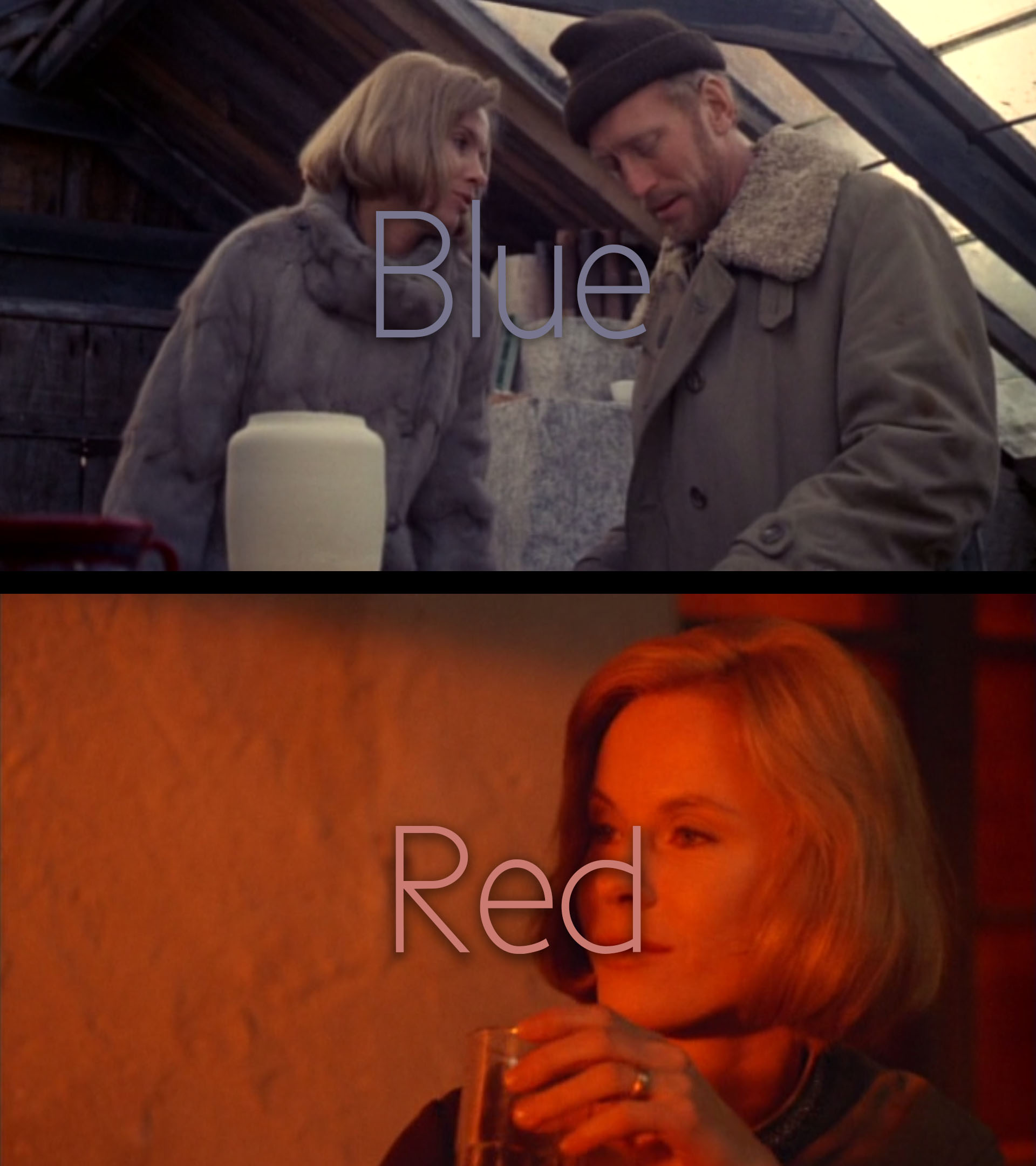 The Passion of Anna uses a bleak colour pallet, to convey the emptiness plaguing the lives of the four main characters of the film. Like much of Bergman’s work, The Passion of Anna – or, more accurately translated, A Passion – deals with issues of existentialism and emotional turmoil.

These themes are explored through the relationships between Anna, Andreas, Eve and Elis, which take place in the foreground, while a story of unexplained animal cruelty is ever present. These two sub-plots are often paralleled by the use of colour: the use of the colour red represents the passion of their relationships, as well as the violence towards the animals. This parallel asks one to question the brutality of human relationships – a motif often present in Bergman’s work, particularly Summer with Monika.

The use of sparse, but intense, red creates a powerful contrast with the chilling background colours – drawing particular attention to the desolate landscape. Bergman (or perhaps, cinematographer Sven Nykvist) establishes the emotional connotations of red in a beautifully simplistic change in colour: in a sequence between Andreas and Eva the colour changes from the cold blues, to hot reds, only moments after Eva kisses Andreas’ cheek for the first time. 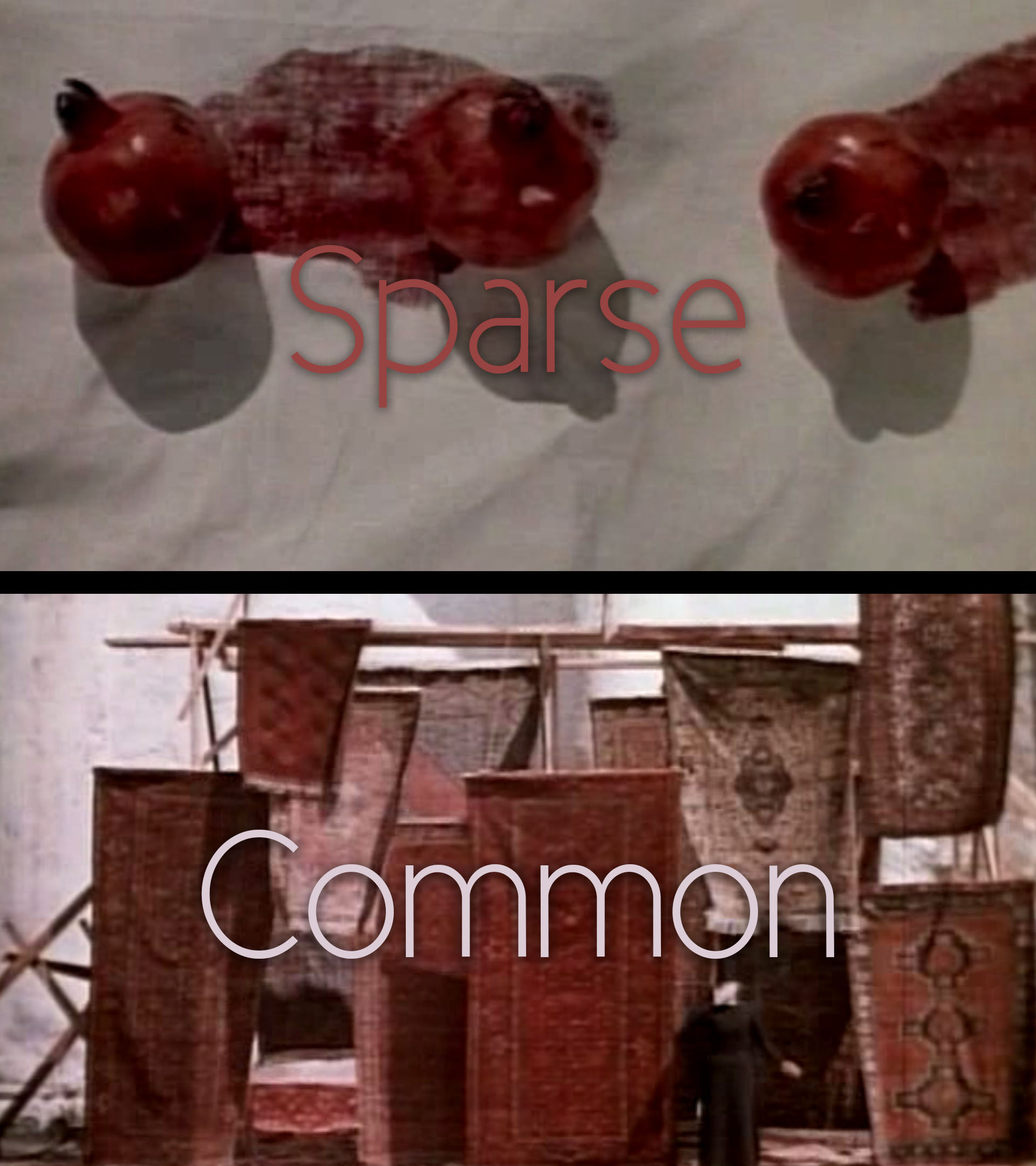 The Colour of Pomegranates is a biographical film about the Armenian troubadour (a poet who writes verse to music) Sayat Nova; the film interprets the life of the poet through the use of allegorical images, set to readings of his original work. The film has no dialogue, or camera movement, allowing the audience to focus entirely on the mise-en-scène elements – including the beautiful dances, choreographed by director Sergei Parajanov.

The film focuses especially on texture – an aesthetic component often overlooked, by less poetic filmmakers. This focus on texture interplays with the use of colour, from the very beginning of this film.

The opening sequence includes several shots of fruits being squeezed, or crushed, against a white backdrop; this sequence foreshadows the use of colour throughout the rest of the film, by showing colour being squeezed into an otherwise colourless background. Over the course of the poet’s life, as shown on screen, colour is added and removed depending on his physical state – going from the squeezing of life into the frame, to the purging of it at the end.