Montague Rhodes James was a medievalist scholar and a provost of King’s College, Cambridge. He was also one of the most influential writers of horror fiction to have lived. During his lifetime, his work received praise from such other luminaries of the horror genre as H. P. Lovecraft – who called James a ‘literary weird fictionist of the very first rank’ – while today his work continues to be well regarded by the likes of Ramsey Campbell and Stephen King.

His ghost stories, in particular, are still considered some of the best in the genre. This is interesting considering that many of them were originally written and read aloud to friends as Christmas Eve entertainments.

The word ‘Jamesian’ has been coined to describe James’s style and in his ‘Ghost – Treat them Gently!’ James himself outlines what he considers to be the essential elements of an effective ghost story, all of which can, of course, be seen in his own work. Firstly, it must have a contemporary even quite mundane setting – James was vocal about his distaste for the clichés of gothic fiction such as ruined abbeys and old castles – secondly, reticence must be practiced with an emphasis on atmosphere: ‘the ghost should make himself felt by gradual stirrings diffusing an atmosphere of uneasiness before the final flash or stab of horror.’

Other recurring elements in James’s work are the discovery of an old object which brings down the wrath of a supernatural entity upon the discoverer, and the use of naïve but often scholarly characters as protagonists.

As is to be expected, James’s stylistic preoccupations have found their way into wider culture. Film, in particular, has strongly felt James’s influence, though it is perhaps not as perceptible as H. P. Lovecraft’s. This may be due to the fact that Lovecraft has a ‘mythos’ connecting his work in which various dark gods and ancient books appear in multiple stories. A film then only has to name-check one of these things and then it too is considered to be part of that Lovecraftian mythos.

There is no such mythos to be found in James’s work, however, and, compared to Lovecraft’s, it hasn’t seen the same amount of cinematic adaptations. During the 70’s, though, the BBC did produce a number of TV movies based on James’s stories. There are also numerous films with Jamesian elements. The best of these are listed here. 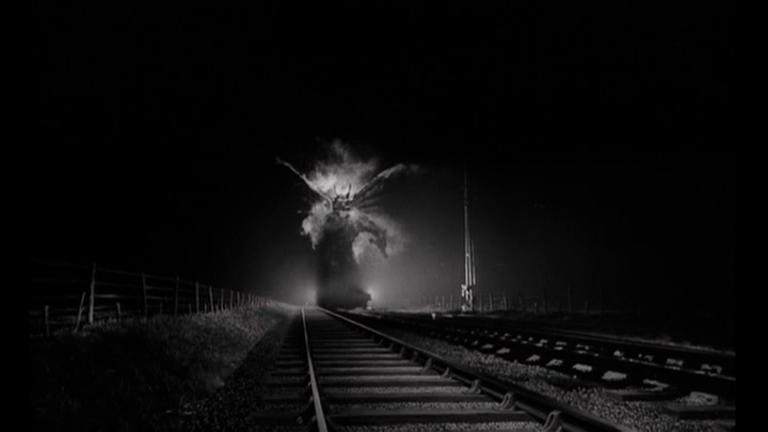 Based on James’s story ‘Casting the Runes,’ Night of the Demon is usually the first thing that comes to mind when discussing M. R. James and cinema.

The film differs from the original story in that, instead of following a researcher at the British Museum, it places an American parapsychologist called Holden as its protagonist. After travelling to England to attend a scientific conference, Holden is saddened to learn of the brutal and mysterious death of his colleague Professor Harrington.

He meets Harrington’s niece Joanna who is suspicious of the official claim that Harrington died from electrocution. Together they begin to look into Julian Karswell, the wealthy leader of a supposedly satanic cult who was the subject of an investigation by Harrington before his death.

Despite the changes to the original story, Night of the Demon remains relatively faithful to James’s style. It’s far more subdued than other horror films of the era and is more concerned with creating an atmosphere than anything else.

It could be argued that the inclusion of the demon, which does not directly appear in James’s story, does detract from the film’s attempts at creating tension – in fact, the inclusion of the demon caused a major disagreement between the film’s writer and its producer. Whether you agree with this or not, though, Night of the Demon still stands as an excellent example of 1950’s horror cinema.

Whistle and I’ll Come to You was the first of a series of M.R. James adaptations filmed by the BBC. Based on James’s story of the same name, the narrative follows an eccentric professor called Parkin as he holidays on the coast of East Anglia. One day on one of his walks along the coast, Parkin uncovers what appears to be a whistle. He examines it back at his hotel room and finds himself perturbed by the Latin inscription on its side which translates as: ‘Who is it who is coming?’

He is then plagued by disturbing dreams and a series of progressively supernatural occurrences which challenge his reason and his academically bred scepticism.

For a TV movie, Whistle and I’ll Come to You has impeccable production values. It’s beautifully shot and makes great use of its captivating but desolate coastal setting. It also boasts an excellent performance from Michael Horden as the socially awkward Professor Parkin, a man whose furtive fidgeting and inability to make eye contact reveals just as much about his character as any of his lines do.

If you’re looking for a good introduction to James’s work then you can’t go far wrong with this BBC adaptation, which is both faithful to the narrative and style of James’s original story.

In 17th century England, a farmer uncovers a strange, non-human skull while ploughing a field. He tries to show the skull to the local judge but is rebuffed when the skull disappears. Soon the children of the village begin to exhibit strange behaviour and some even begin to grow claws and patches of fur on their bodies. They also form a cult around a mysterious demonic figure – the apparent owner of the skull. As the size and powers of the cult increase, it seems as if the sceptical judge is the only one capable of stopping it.

Of the folk horror films made in the early 70’s – Witchfinder General and The Wicker Man being other examples – The Blood on Satan’s Claw is perhaps, for several reasons, the most Jamesian. Firstly there are its overtly supernatural elements, and then there is its ‘hero,’ the judge, who although beginning the film as a rationalist, like the scholarly protagonists in many of James’s stories, is eventually forced into accepting the paranormal nature of the threat at hand.

The motif of a mysterious object whose discovery acts as the catalyst for sinister events is also supremely Jamesian and is one that occurs again and again in the films on this list. 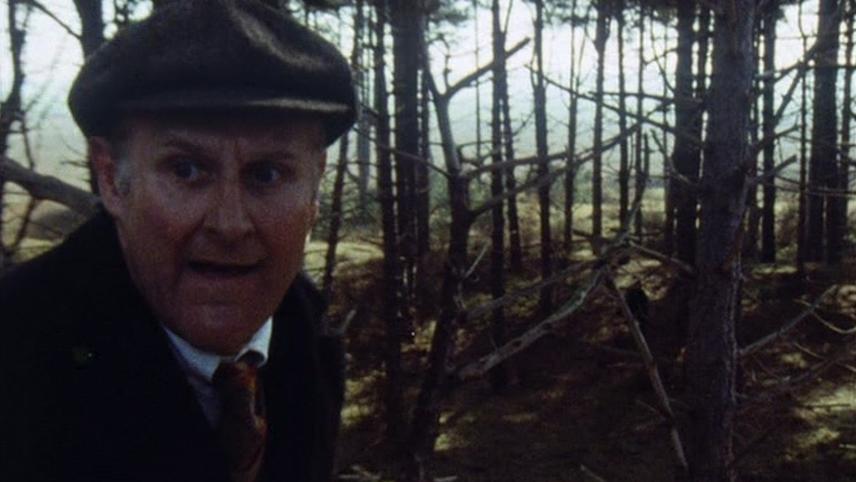 A Warning to the Curious was the second M.R. James adaptation to be filmed as part of the BBC’s A Ghost Story for Christmas series. Of all the James stories brought to the screen by the BBC, it is probably the most unnerving.

The plot sees London clerk and amateur archaeologist Paxton travelling to the Suffolk coast to find the truth behind a legendary crown which is said to be buried near the village of Seaburgh. When he gets there, he finds himself intrigued by stories of the crown’s guardian, a sinister man called Ager. Although Ager passed away years before, Paxton becomes convinced he is being followed by the man’s ghost, who is seemingly angered by Paxton’s attempts to find the legendary crown.

Like Whistle and I’ll Come to You, A Warning to the Curious makes great use of the East Anglian coastal scenery which inspired James himself – he was a frequent visitor to the Suffolk town of Aldeburgh on which Seaburgh is based. It also adheres to James’s doctrine of reticence and thus takes the time to instil a sense of dread in its viewers rather than trying to bombard them with cheap scares.

Although some changes are made to James’s story, such as dispensing with the multi-layered narrative, it still remains a relatively faithful distillation of his original vision.

It also retains a somewhat timeless quality that means it holds up remarkably well today and enables it to still give modern viewers chills. 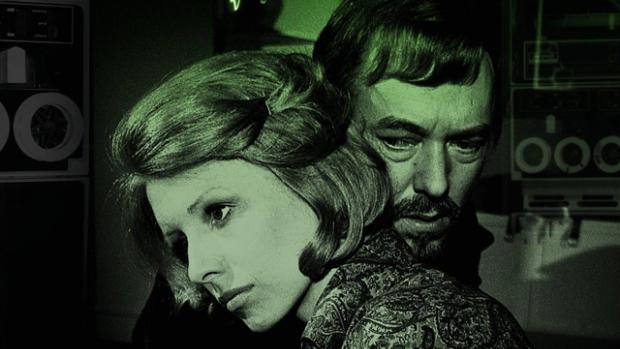 When a group of technicians and programmers working for an electronics company, move into an old country home, their minds are on finding a new recording medium, not on ghosts. After programmer Jill has a terrifying encounter in an old store room, however, the team, and especially its selfish leader Peter, can think of little else.

Together they methodically begin directing their knowledge and utilising their equipment in an attempt to solve the room’s mystery. This constant exposure to supernatural phenomena inevitably takes its toll, however, and it isn’t long before cracks begin to show in the psyches of the team’s more sensitive members.

Though not officially part of the Ghost Story for Christmas strand, The Stone Tape   was broadcast on the BBC not long after A Warning to the Curious. Writer Nigel Kneale – most famously known for Quatermass and the Pit – was a fan of the stories of M. R. James and, indeed, James’s influence can be seen throughout the film.

It could be argued, in fact, that The Stone Tape updates the classic Jamesian tale and brings it into the modern day. Its focus on the intersection between technology and the paranormal and its interest in the psychological makeup of its characters are thoroughly contemporary while its tense slow burn atmosphere and commitment to suspense are things James would have admired.