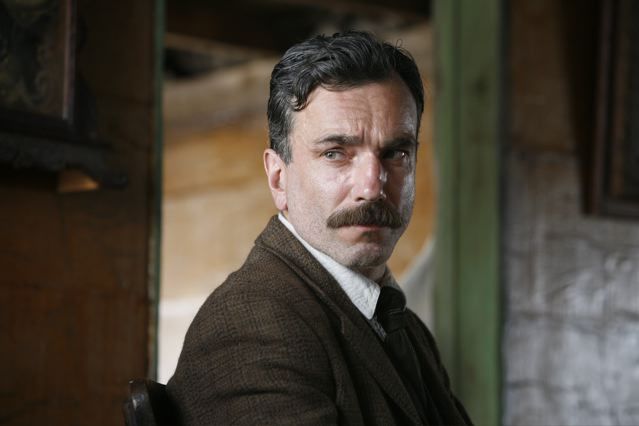 It is the writer and director’s role to create a character, their vices, virtues, strengths weaknesses and their passions but it is an actor’s role to make an audience realise this vision. The role of an actor in a film is to draw in the audience- to make them susceptible to the emotions drawn out of the picture and the lead actor tends to have the most overbearing weight of this responsibility.

The academy awards once a year for this achievement and although many are overlooked for their efforts those awarded are still distinguished and potent pieces of a compelling nature. 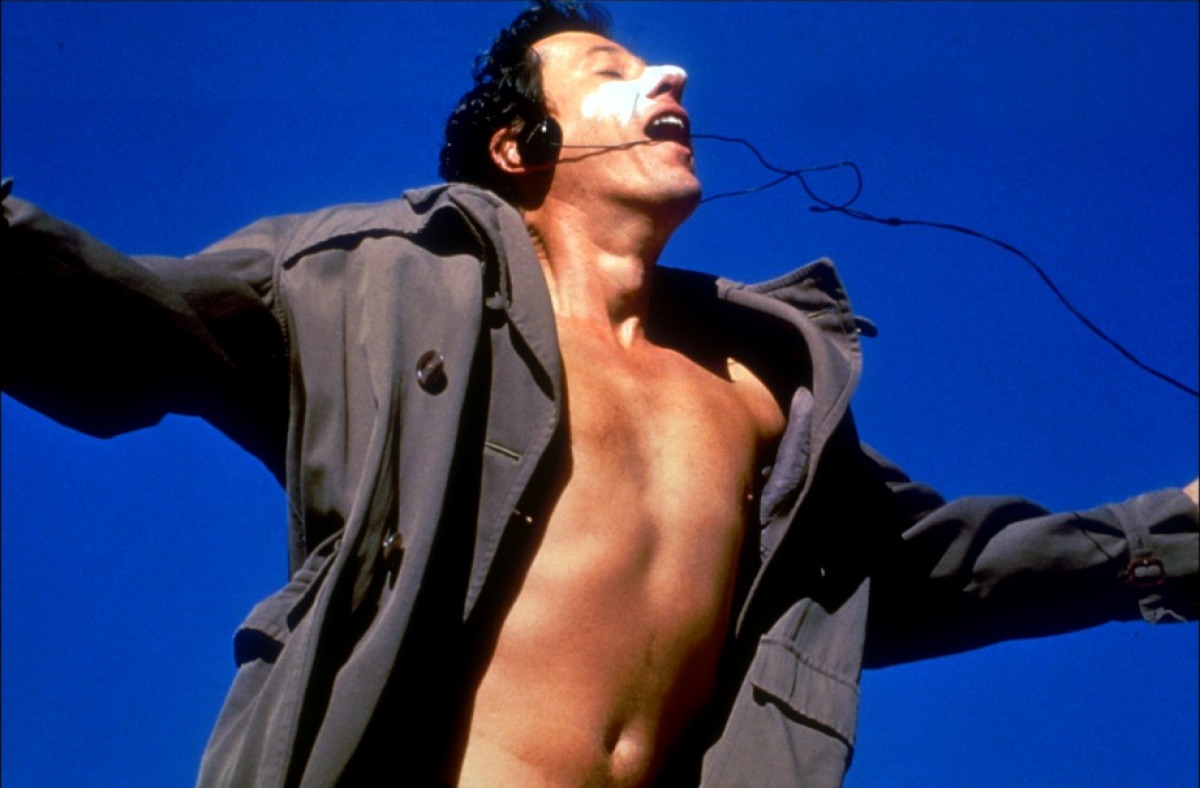 Geoffrey Rush is perhaps Australia’s most accomplished performer and it was Shine which gave him global attention. David Helfgott is a master pianist whose abusive father weighs upon him as an ever present fear eventually causing David to develop schizophrenia.

Geoffrey plays his part to a tee and he was universally recognized as the star performer of the year (with awards from the golden globes, BAFTA’s and Academy) as well as spending hours and hours and hours mastering the piano and living alongside schizophrenics to understand their plight there was no doubt to Rush’s dedication to his performance.

His success in Shine led to him becoming a household face for families through Pirates of the Caribbean and recognized by historical and arthouse fanatics through Elizabeth and once again dabbling in Oscar season with The Kings speech however it is his role in Shine that stands out as a masterstroke performance and his take/understanding of the mental illness portrayed has few comparisons.

Shine is a powerful and compelling film that is made entirely by Geoffrey Rush’s turbulent performance.

An accomplished performer Peter Finch delivered his opus magnum in this satirical drama about a news anchor whose career is about to be put to an end.

The film through Finch address still prominent issues about media and entertainment whilst highlighting the depravity of media outlets in the desperate desire for profit. Finch delivers a convincing and shocking rant after threatening to kill himself- all on live TV and after this increases the show’s ratings its devilish and manipulative producer (Faye Dunaway whom also took home best actress) uses this to create a new and more extreme TV show.

Viewers are made to feel empathy for such a narcissistic character as Howard Beale due to the extreme powerhouse of performance quality Peter Finch uses and although 1976 was an incredible year for acting with Robert De Niro in Taxi Driver as well Beale’s final performance won him his posthumous academy award but it was more than deserved.

13. Anthony Hopkins as Hannibal Lecter (The Silence of the Lambs, 1991)

One of three films to win actor, actress, director and picture and the first horror film to take home the title it is fair to say that it is Anthony Hopkins role as the malicious, manipulative, sadistic and cannibalistic Doctor Lecter that turns this film from a mediocre thriller to the bone chilling horror it is renowned for being.

Although his screen time is barely 15 minutes of the total film Anthony Hopkins provides much needed energy and charisma into the film, propelling it through act after act as audiences wait for the nightmarish presence of Hannibal Lecter back onto the screen and the chemistry between Foster and Hopkins is magnificent. The primary reason Hopkins entry is not higher on the list is simply a lack of time, he was not truly a lead but what was originally a supporting role became the most prominent area of the film.

Roger Ebert once said Spacey was “an actor whom embodies intelligence in his eyes and voice” and although Lester was not a very intelligent man, it was this intelligence in his performance that turned Lester from whom an audience would view as a wanna-be Humbert Humbert (Lolita) to a sympathetic and humorous man.

Lester Burnham is a loser, he knows and we know it and his wife (Annette Benning) is the fakest face in a middle class suburb full of them whilst their angst-filled teenage daughter wants a better life and the next door neighbour likes to film her and dead things.

As basic a summary of each character as that is, without the brilliant performance by Spacey this iconic satirical drama would have been as mediocre as that. Spacey draws the film away from what would have been a half-hearted satire, bitter and with limited real humour instead, audiences empathised with the plight of a man we all came to see resemble us- at least in aspects.

What drove Spacey to play Lester was his humanity, he saw in Lester aspects of himself and those around him and he believed it was important to make Lester a protagonist viewers could associate themselves with rather than a man they could laugh at- clearly his decision was right and grabbed him an Oscar deserved unquestioningly. 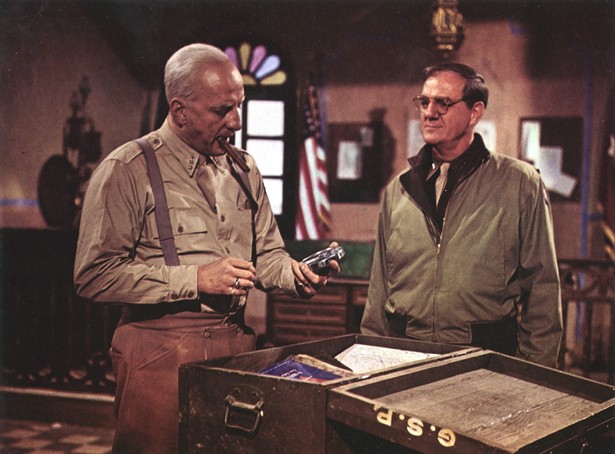 In a famous display of humility or self-depreciation George C. Scott refused to accept his academy award, stating that he felt he performed with far less quality than others in his competition but as the academy refused to give the prize to another competitor- for truly there was no competition to is powerful transformation into Patton- the award remains branded with his name.

General Patton was an extremely controversial military figure in WW2- a contrasting military general to Scott’s dopey character in Dr Strangelove and a clear example of his versatility and upon the release of the film all controversy surrounding Patton turned to sympathy and idolisation at least, for a time.

The film follows the general’s military exploits, tracing his career, personal life and eventually his outspoken defiance against current military tactics employed by the US. Without going into details the film challenges the USA in how it dealt with this criticism and turns Patton into a far more heroic character, the story is not entirely bias however showing often the darker side to Patton.

It’s fair to say that both sides of Patton were so powerful in establishing this historical figure because of how George Scott played him, with humanity. Although George never admitted it he truly was the most deserving figure that year, perhaps he didn’t agree with the academy because he was too modest or perhaps he self-loathed. Even if he never acknowledged his own achievement in modern cinema it just makes it extremely important that others do so instead. 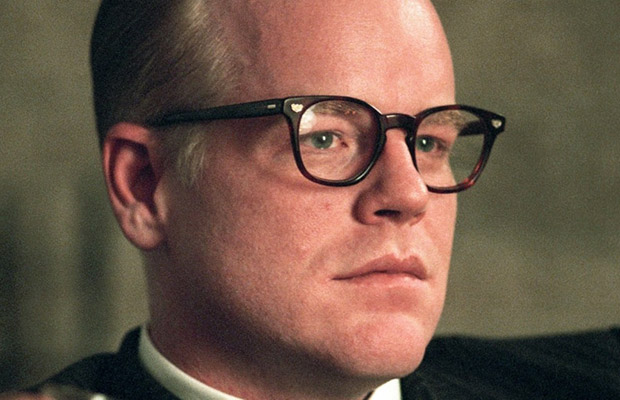 Phillip Seymour Hoffman was one of the world’s greatest supporting actors, from Paul Thomas Anderson to the Coen Brothers there were few legendary ensemble casts that he did not improve upon exponentially. Despite a few leading parts Phillip rarely ventured to be the primary focus of a film so when Capote was announced and cast, some were sceptical but many were eager and Hoffman far from disappointed.

Capote follows the author through the six years in which he wrote and explored ‘In cold blood’ and his relationship with the two killers his novel follows. Capote was always an outside, he felt it from others from the way he talked, walked, spoke and constantly travelled but this isolation had become a bitter fact of life for Truman.

When these killers come to rely on him he becomes uncomfortable with how much he cares, his conflict is clear however but Hoffman manages to sideline audience horror as we are made to realize that we are only as horrified by this relationship as Capote is too.

What makes this a truly powerful performance is we don’t think of Hoffman on the screen, like always Hoffman expresses his versatility and becomes Capote as audiences don’t recognise the angry phone-sex line owner from Punch Drunk Love or the strange socially awkward secretary from the big Lebowski they see confident but weird author, in the height of his moral and emotional conflict which pervaded the rest of his life.

As iconic a film as it is a novel, To Kill a Mockingbird is a universally applicable tale of racism, stereotyping and injustice headlined by Gregory Peck’s beautiful and heartfelt turn as Atticus Finch.

Atticus is a widowed husband, father and lawyer of two children; Scout and Jem Finch (Mary Bedlam and Phillip Alford) and is currently handling the case of a black man Tom Robinson (Brock Peters) and through this ‘rape trial’ the children- and us as viewers are exposed to the disgusting underbelly of detestable social attitudes still residing in society today.

Atticus is a good man, loving and caring but he is also portrayed not as an idealistic good man rather a troubled but compassionate soul whose own beliefs are beaten down upon by the world he is surrounded by.

It is Gregory Peck’s ability to make the audience understand Atticus’s plight; to feel his frustration and anger, his hurt but also his love and desire to do good too. Finch’s thoughts become our own and his mind becomes merged with our own as we follow through the ever unfolding story whose conclusion is as cruel as the world it is meant to reflect.