THE MOVIE – A movie that was banned for its perceived anti-religious themes in its day, Ken Russell’s bold and disturbing shocker still retains its pulverizing power after more than forty years. Father Grandier saves the city of Loudun from being destroyed by the establishment only to be accused of causing demonic possession.

THE NIGHTMARE – Sister Jeanne, the hunchback nun who is obsessed with Father Grandier dreams of worshipping him as he walks across a lake a la Christ and then drying his feet with her hair. Her hunchback is revealed and the surrounding nuns screech and laugh at her as she is blown around the ground helplessly by a biblical cyclone. An awful scenario for anyone, let alone Sister Jeanne and her sinful fantasies.

IS THE SEQUENCE NECESSARY? – Definitely, as it further displays Sister Jeanne’s obsession with Grandier. It is also the first in a series of her similar dreams and fantasies.

THE MOVIE – The ridiculously gory but still essential third instalment to Romero’s revered ‘Dead’ trilogy. The zombies have now overtaken the world, massively outnumbering the living, but a small group of remaining soldiers and scientists are taking shelter in an underground storage facility.

THE NIGHTMARE – After Sarah is exposed to some horrific medical experiments that are being conducted in the facility by Dr. “Frankenstein”, she dreams that her soldier boyfriend leans over the bed, spilling a bloody pile of viscera onto the floor from a hole in his abdomen. Thank Tom Savini’s phenomenal practical effects for the revolt factor here.

IS THE SEQUENCE NECESSARY? – Nope, essentially just showing off Savini’s realistic gore effects, but gorehounds will not be complaining and what is a zombie film without maximum bloodshed?

THE MOVIE – Years after the first Terminator was sent back in time, another is sent back to protect Sarah Connor’s son, John – the future leader of the resistance. Meanwhile, a liquid-metal Terminator has been sent to kill him in James Cameron’s spectacular action sequel.

THE NIGHTMARE – Sarah Connor envisions the moment the doomsday clock strikes which obliterates L.A. and a park full of children and parents – literally reducing everything and everybody to ashes and bone. Most eerily, Sarah sees herself who cannot hear her screams from behind the corrugated fence. “Anybody not wearing 2 million sunblock is going to have a very bad day, get it!?” It most definitely looks like they will.

IS THE SEQUENCE NECESSARY? Yes – Sarah has been locked up in an institution for years, powerless to prevent the impending apocalypse –the knowledge of it would probably still weigh on your mind even after you had escaped. It also triggers her decision to go after Dyson, an imperative plot point. 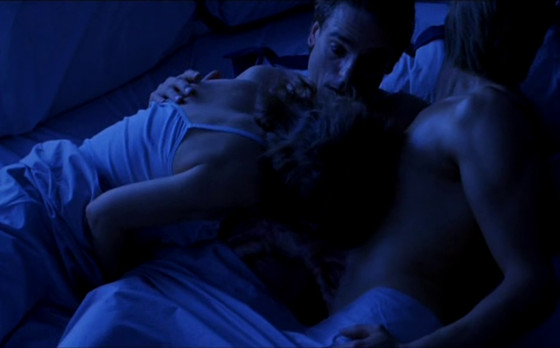 THE MOVIE – One of David Cronenberg’s first forays outside of the body-horror-hybrid movies and into a more psychologically themed area of the genre. Dead Ringers concerns the treacherous womanizing schemes and drug abusing of two identical twin gynaecologists. It also features not one, but two outstanding performances by Jeremy Irons in the lead roles.

THE NIGHTMARE – Beverly (one of the twins) wakes up to realise that he is physically joined at the hip to his brother, Elliot. Claire, a woman with whom they are both intimate, literally bites away at the flesh which conjoins them. An unashamedly brazen visual metaphor but a particularly grim one at that.

IS THE SEQUENCE NECESSARY? – Yes – even though it is a little on the nose about Claire coming between the twins, it ultimately leads to Beverly’s drug addiction when he is given them to help him sleep.

THE MOVIE – A classic John Carpenter film involving a young group of physicians who are approached to investigate an ominous canister of slime in the bowels of an old church.

THE NIGHTMARE – The members of the team experience similar dreams individually – a silhouetted, cloaked figure stands in the doorway of the church whilst a voice states that “this isn’t a dream… you are being contacted from the year 199?”. The hand-held footage of the dream was first shot, played back on a TV and the screen and that was then shot to give it a distinctive, raw and unsettling visual aesthetic.

IS THE SEQUENCE NECESSARY? – It is a central strand of the plot which suggests that the Anti-god is communicating subliminally to the characters, so yes.

THE MOVIE – A classic 70’s horror that was adapted from the Stephen King novel (as was a few other entries on this list). Carrie White is the school outcast, constantly being tormented by the popular kids and living with a draconian Christian mother who tries to instil the religion upon her. However, these people do not realise that Carrie possesses the devastating powers of psychokinesis. Essentially, it is the story of Cinderella gone bad, very bad indeed.

THE NIGHTMARE – The sole survivor of the prom, Sue approaches Carrie’s resting place. She places her flowers on her grave only to be grabbed by the still pig-blooded hand of Carrie. A classic dream sequence, and one that leaves the audience feeling rather vulnerable after the end credits.

IS THE SEQUENCE NECESSARY? – No because it does feel rather tacked on, but also yes because Sue was a character who did ultimately want to help Carrie after ostracizing her – so she still must pay!