Of course, this sensuality can lead to more sexuality, but here the filmmakers are more concerned with being sensual. An aspect of our lives that can be explored and experienced beautifully through cinema.

Whether its dealing with the inner or outer feelings of humans, here are 10 of the most sensual films. 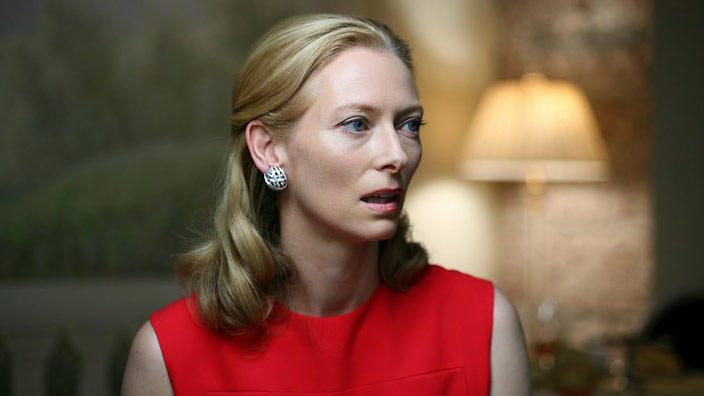 A film that explores the hidden desires of a bourgeois family in Milan, specifically its lead played by Tilda Swinton’s Emma Recchi. From the opening, Guadagnino establishes this family that longs for nothing socially or fiscally, which allows the characters to truly explore their deepest longings.

Throughout the poetic and operatic film, accompanied by works from composer John Adams, we slowly see the sensual awakening of Swinton’s head of the family. She is originally from Russia, so she feels like an out-of-tune outsider thrust into this family.

As a result, you feel like she never stops looking for a true sense of belonging, thus she begins a relationship with her son’s friend. As the film plays on, we don’t get explicit sex scenes, but instead beautifully photographed scenes by Yorick Le Saux of Swinton lying naked in a flower garden, the brushing of her hair, and the transcendent stairs across decorated hallways of art. We sense there is more than just the urge for a conquest or a love affair.

The film is composed of these small moments with soft lighting in Milan and its countryside, and specifically with the sensual feelings of the first love of her daughter, played by Alba Rohrwacher.

Guadagnino uses all the cinematic elements to create a warming story of new and old love through the senses. We don’t need any explicit sex scenes or eroticism as the scenes with Swinton simply grace the screen, and we experience the sensuality as if we are there beside her.

A film in which Stanley Kubrick wanted to make for nearly 25 years before doing so, adapting the 1926 novella “Traumnovelle a la Dream Story” by Arthur Schnitzler, into a fever dream all himself.

The film explores Tom Cruise’s Dr. Hartford wandering around a dazed-like New York after his wife, Nicole Kidman’s Alice, told him that she contemplated an affair a year earlier. This sets forth a motion of events that all revolve around one’s libido, hidden feelings, and missed chances.

For example, the motif of his naked wife being caressed by a completely clothed naval officer in a black-and-white reimagining of what could have occurred. There’s no sex involved, only the carnal rubbing of the skin, the sensual feeling of wanting to be desired, loved, or generally affected. This drives Hartford for a connection, understanding, or answer for what his wife was contemplating.

As in all Kubrick films, the layers, themes, and messages keep piling up after each viewing. But for his swan song, he turned to the simple story of a man and wife’s problems in his particular way, making his most personal note on the feelings of love.

Part of Kieslowski’s masterful Dekalog, in which he extends Part Six into a story of love, torment, voyeur, and that longing for something more than the physicality of love. The film unfolds as a young man named Tomek spies on his beautiful older woman, Magda, from across his apartment building. What results is an examination on love in the modern age, the aspects from different ages, and that sensuality from different viewpoints.

As we witness Magda’s sexual encounters and Tomek’s obsessive nature to get closer to Magda, we see the characteristics of these two people. As the film continues on and these characters form a bond, we start to see the shift in nature as they learn about each other from an introspective viewpoint.

For example, Magda states, “There is no love, only sex,” to Tomek’s disagreement. As the film is told in Kieslowski’s poetic form, we see she has adapted and succumbed to Tomek’s viewpoint of sensuality through admiration, and loneliness is the true answer.

The color red, Preisner’s score, and Adamek’s camera only add to the central core of the film and Dekalog’s story, loosely based on not committing adultery. Kieslowski’s films continued to explore the sensual nature of human beings in his later and final works, but here is the genesis of that search.

Maybe the most sensual film in all its aspects in Peter Greenaway’s one-of-a-kind film. Somehow he manages to balance pure sensual nude scenes and lovemaking, the cooking and consuming of human beings, and even feces to pure art house entertainment gold in a truly a thinker of a film. With a stellar cast that includes Helen Mirren and Michael Gambon, the film dazzles between being aroused and being borderline discomfortable.

Aided by Sacha Vierny’s light-shifting cinematography and Greenaway’s architectural approach, the film unfolds over the course of one night in a restaurant. And since food and sex are involved, the carnal, flesh, and gluttonous are on spread in full absurdity yet grounded display.

Throughout the film, the characters float around the restaurant under the harsh lighting, engaging in one form of debauchery as the next, yet we are constantly engaged. The film’s excessive indulgence in sensual pleasures, whether sexual or carnivorous, can’t be undone nearly 30 years later.

Lastly, the theme of criminality comes into play, which rounds out the trio of themes to surely allow the audience to dream in this world and let their deepest or even shameful fantasies play out. Greenaway, an intelligent director, almost seems to let down his own hair and let everything he expressed visually before in an astute manner become more sensual in the worst, therefore, the best way possible.

The fifth of sixth films in Rohmer’s Six Moral Tales explore the longings and flirtation of the diplomat Jerome, played by Jean Claude Brialy near a lake house in the summer of 1970. As in pure Rohmer aesthetic, the film is simply shot, flawless in color by Nestor Almendros, and is expressed much through the dialogue of characters and their stares between one another.

Throughout the film, Brialy’s character is trying to seduce, woo, or simply be with two younger women. As Rohmer usually uses a voiceover technique or allows the characters’ thoughts to be present, Brialy directly states his love for Claire but particularly her knee.

How can a man become so obsessed with one woman’s body part? In the end, it doesn’t matter, but what flows is a series of conversations near a lake, on a boat, or in a villa that range from desire, pleasure, and everything in between these gorgeous characters.

Rohmer allows his camera to linger on all the shots and reverse shots to allow these advances and invitations to soak in, much like the sun they are under. Therefore, all these natural elements and human behavior somehow join together for a minimal, exquisite, and sensual film that plays over the course of a month involving a lake, man and women, and Claire’s knee.