In a possession film, a body becomes a marionette. Some devilish entity grips the proverbial steering wheel, commanding a person’s every move, ventriloquizing their speech, and inflicting pain on those around them. The intent of this infiltration, it becomes clear every time, never stems from a benevolent place. After all, the Dark Prince himself uses it as his preferred method of torture.

Our ranked list of 10 possession films involves a couple of rules. In each of these motion pictures, a person or presence takes residence inside another being, so as much as we love films about curses and hauntings, none appear here. To that end, while Lucifer and his devoted imps make their presence known, the following selections also include instances of possessions that go beyond religious/demonic control. 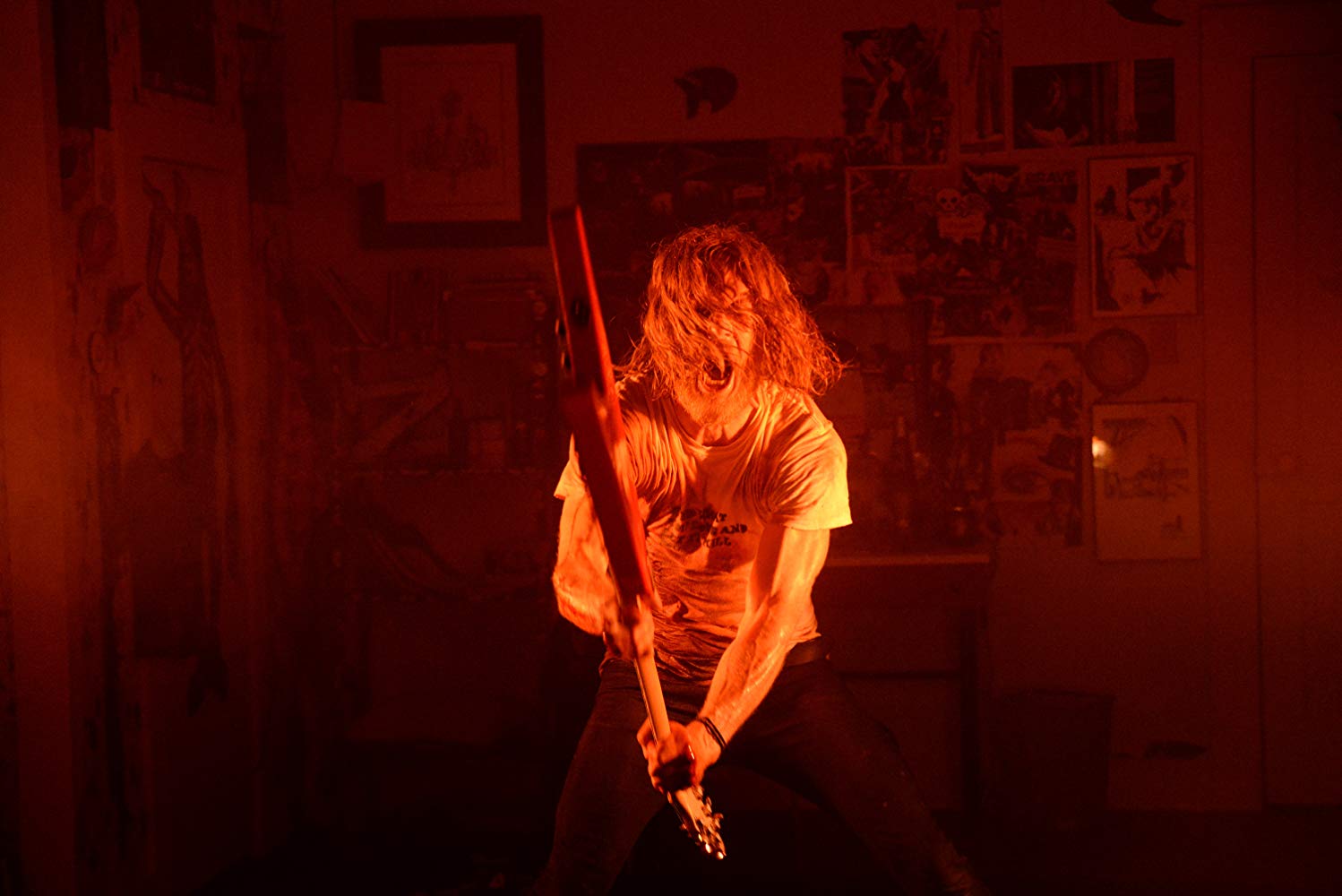 “The Devil made me do it.” This phrase springs to mind the second we hear the ominous whispering funneled into the ear of a squat-postured, middle-aged man who hunches with an electric guitar strapped around him. The instrument lets out the first thrashing chord, a fierce sound that knocks a crucifix from the wall. An opening so self-aware makes The Devil’s Candy feel like a horror comedy hybrid, but rest assured, events grow increasingly more sinister as the narrative moves forward.

Truth be told, this one marks the most flawed entry on our list, but it merits the title of truly unforgettable. While the picture lacks the flare of mystery and cutting dialogue that build the masterpieces set to appear later, the wince-inducing story elements cling to a person long after the credits roll. Look no further than the “cuddle scene” where a man possessed by Satan crawls into bed with a young girl, stroking her hair in an almost father-like, irreconcilably creepy way. He aims to sacrifice her at Lucifer’s altar, but before that happens, he spends time cherishing her.

On the opposite end stand the girl’s parents, metalheads who manage to keep their headbanger identities intact despite the demands of bills and raising a child. Working as a painter, the father’s art turns from dentist office commissions to dark premonitions: depictions of the soon-to-be dead and other scenes disturbing enough to make Francis Bacon blush. Director Sean Byrne knows what bothers the audience most, i.e. the moments when the paintings become flesh and blood. The camera lingers in those scenes, taunting us.

9. Night of the Demons 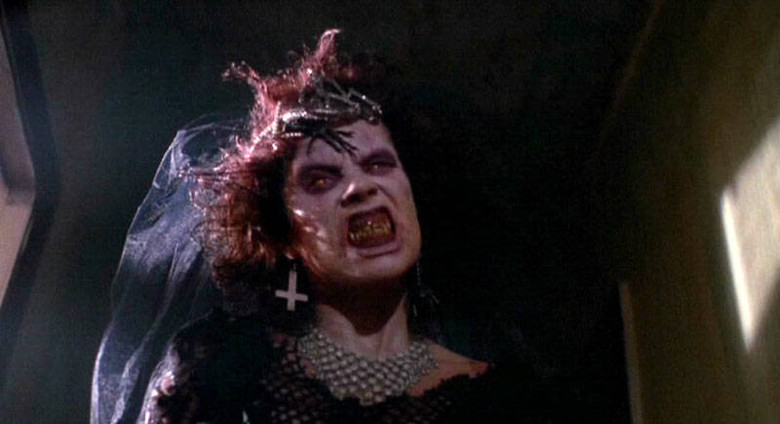 A group of amorous teenagers party it up inside an abandoned funeral home, which proves to be a crummy idea. As it happens when someone sullies a sacred space, demons show up to ruin the good time. The plural of demons means that we witness a plethora of possessions, whereas the usual modus operandi calls for only one. In fact, as one kid after another succumbs to these takeovers, the Hull House jamboree becomes a veritable mephistophelian convention.

Night of the Demons stands out on this list for another reason. Out of all the others, this one includes the most slasher elements. In this way, it forgoes the psychological torture that lays the foundation for most possession films in favor of a more slice-and-dice style of victim dispatchment. Mirror shards and razor blades factor heavily into the story. As well, actors deliver cartoonish lines such as “eat a bowl of fuck” and “who cut the cheese?” with some frequency. All of it happens with a tongue-in-cheek awareness that stops just short of winking at the audience.

No doubt that this film provides more snackable fare than the other nine examples, but it unquestionably earns its membership in the club.

When he created Prince of Darkness, John Carpenter fused the often-diametric worlds of science and spirituality. That description, while true, makes it seem as though the director aimed for a reconciliation of opposing forces in the style of a coexist bumper sticker. Not the case. Instead, Carpenter wed the spiritual horror of a film like The Exorcist with what amounts to venereal disease.

The movie posits that, if germs, viruses, and mental illnesses burrow inside a person, changing their personality and often controlling their thinking, it makes sense that Satan employs similar methods. In the world of science, matter and antimatter work against one another, most of the time for good. (One finds antimatter in the radiation that aims to obliterate cancer cells.) But on the flip side, Prince of Darkness contends that religion works in the same equal-and-opposite framework as science.

In essence, there exists God and antigod, the presence of a benevolent force and another entity that deletes it. In this case, the antigod, appearing in physical form as a green liquid, makes a tornado effect inside a glass encasement. Of course, the satanic serum seeps out, and takes over unsuspecting victims in order to captain a vessel with which to carry out his dark intentions. If the host fails to shed the malicious resident, it drives them toward unmitigated madness, then death. 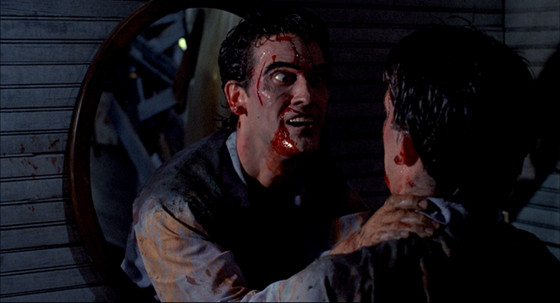 While the bulk of possession films require some demanding physicality from actors and stunt performers, few employ slapstick comedy with the bravado of Evil Dead II. In this regard, director Sam Raimi stirs buckets upon buckets of blood into the charming clumsiness of 1920’s silent films. The result looks as if Charlie Chaplin made a movie with the “Godfather of Gore,” Herschell Gordon Lewis. Alongside Bruce Campbell’s camptastic acting style, the combination of vile and vaudeville works.

Here the possessions take many forms. Among other examples, a hand turns against the person to whom it remains attached. Meanwhile, a woman becomes a snarling, silver-eyed Kandarian demon. Ipso facto, even though more laughs than scares occur, the narrative never lets up. If the audience catches their breath, it happens in the few moments between the amputation of the rogue hand and when its owner replaces it with a chainsaw.

Raimi set out to reimagine the first Evil Dead as a comedy. Treading the horror comedy waters seems dangerous for a filmmaker, especially since scaring someone and making them laugh prove laborious for other storytellers. To combine those two emotional goals means double difficulty, yet when a director executes the hybrid so well, the film’s legacy lasts a long time. Evil Dead II earns its place as possession film royalty. 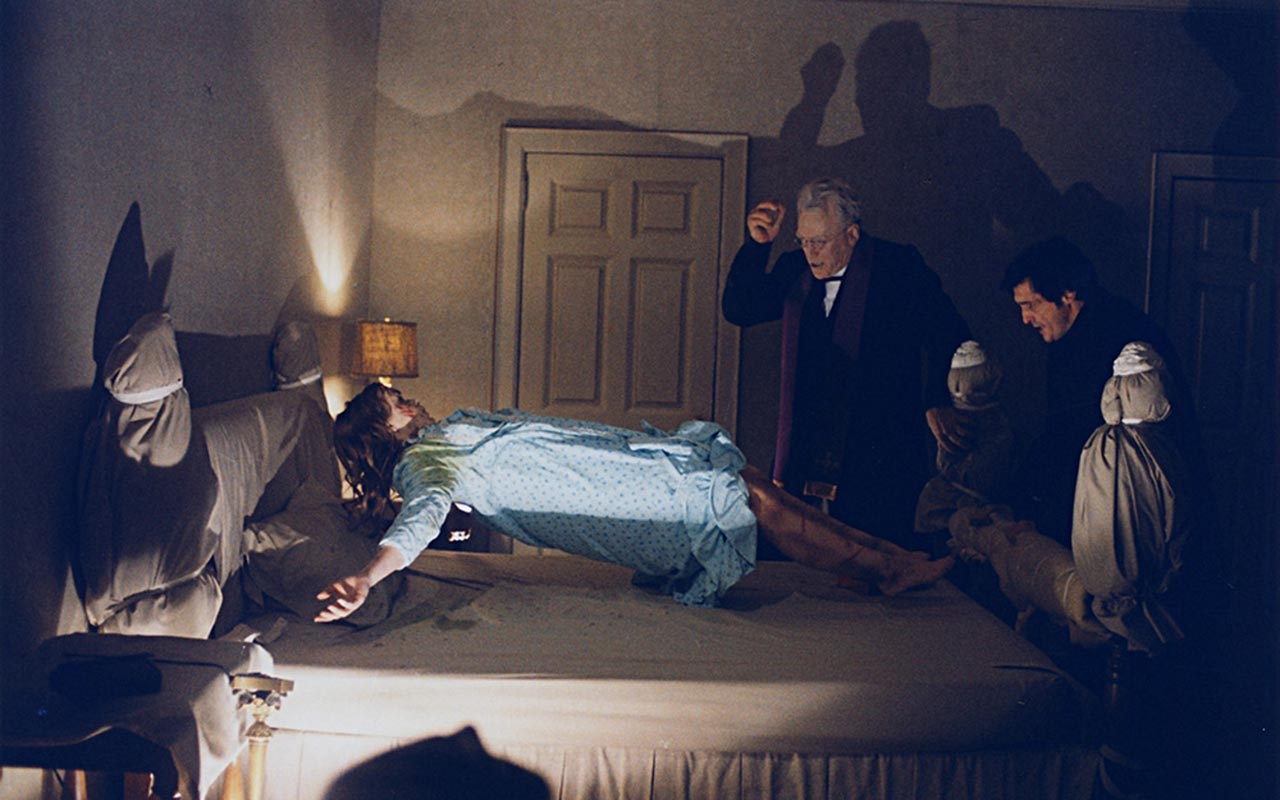 This selection demands a place on any list about possession films. After all, the movie provides the measuring stick against which all others get judged.

The centerpiece of the genre, The Exorcist continues to scare new generations decade after decade. The reason for that: the film takes sacred totems of society, namely children and religion, and shows what happens when these symbols of goodness become irreversibly twisted. Released in late 1973, The Exorcist sent at least some of the world into a state of hysteria, and no other genre wields that much power as possession cinema.

In this way, it set an impossible standard. The moment the demon-infested preteen performs genital mutilation on herself, using a crucifix no less, we know barriers shall soon fall. And when she taunts the priest with details of his recently dead mother’s social life in Hell, we know the torture comes from both physical and psychological angles. The Devil wants to win, and in the end, he always completes that mission.