American Beauty aims to hold a mirror to the face of the American middle-class and satirize mid-life crisis through a cynical eye. Almost a decade in the making, the story begun as a play, before it transformed to a screenplay by Alan Ball.

Although it enjoyed critical acclaim, it was also criticized for the familiarity of its characters that bordered the mundane. This is rarely a positive attribute in a story, but in American Beauty’s case, it is an intentional attempt to not only render the characters relatable, but to leave you with a very real sense of knowing people like these in your life.

The film’s short opening sequence shows a homemade video of Lester’s daughter explain that she is embarrassed by her father’s infatuation for younger girls, ending with Ricky offering to murder him as a favor to her. This immediately creates expectations for the film’s conclusion, which are enhanced moments later when Lester’s narration reveals that he will be dead within months.

Although through the course of the story, a number of candidates to assume the role of Lester’s killer appear, the opening scene still rings in our heads, making Ricky the most likely one. Expectations are subverted in the end, when Colonel Fitts kills Lester over a false conclusion drawn concerning the nature of the victim’s relationship with his son.

With a monotonous, slightly indifferent air about it, American Beauty is designed to encompass everything we are conditioned to dislike in film, but succeeds in creating a compelling final product.

A very original take on contemporary romance, Eternal Sunshine of the Spotless mind manages to retain a realistic view of relationships although its premise is deeply rooted in fiction. Bearing the stamp of Charlie Kauffman at his finest, the film succeeds in creating suspense in the very basic idea of whether two people will end up together.

This is a very different entry on this list because the story’s conclusion is not tackled just in the opening scene, but in the first 17 minutes. After introduced to an awkward but strangely familiar meeting between Joel and Clementine, audiences are abruptly jerked to an undetermined time period of their relationship.

Confusion arises from the reverse storytelling, the surreal scenes that ensue and the hallucinatory feel of the film’s second act. You are Alice falling down the rabbit hole, not knowing what is real anymore.

The final act brings cohesion as viewers are transported back to the present, where the story picks off exactly at the point in which the first one concluded. This format works because at any point in time, viewers know exactly what their protagonists do, allowing them to identify with their feelings and actions. The first act meeting is as new to us as it is to Joel and Clementine.

We share Joel’s confusion and bafflement during the trip in his memories. We finally understand what’s at stake in the end and together with the protagonists, we ask ourselves what we would do in this situation. Kauffman forces us to ask ourselves whether we are cynics or romantics, and although the film isn’t open-ended, each of us can imagine a different conclusion.

Eternal Sunshine of the Spotless Mind goes into great lengths to engage its audience in the experience through a meticulously planned first act. This pays off in a big way and is perhaps the greatest reason behind the film’s commercial success and critical acclaim.

Billy Wilder’s Sunset Blvd is a deconstruction of the golden era of Hollywood centered on human vanity in a cutthroat business. The film starts off with a murder in a luxurious villa, while the narrator provides viewers with the necessary context. The tone is evident from the very beginning; a paparazzi approach with cynical undertones, as the victim is described as “nobody important” and the only interesting aspect of the crime is that an old-time star is involved.

The story jumps back to six months earlier introducing us to the aptly named Joe, a down-on-his-luck screenwriter trying to make it in the industry. His need for success knows no bounds and when he sees an opportunity in the eyes of Norma Desmond, a long-forgotten film star, he takes it.

Norma harbors delusions of grandeur and of days long past, but even that’s not enough to stop an eager young man starving for fame. Their codependent relationship begins, with Norma gradually falling in love with Joe, who although strives to seem reluctant, goes along with it to further his career.

At the film’s climax, Joe lashes out on Norma and see shoots him dead, taking the audience back to the opening scene. In the aftermath, a devastating scene shows Norma getting ready for a movie she believes she will star in. Her mind is now completely gone.

The film touches upon the fragility of the human psyche as Norma begins to lose touch with reality. Max’s story is a perhaps bigger example of a toxic relationship, as we discover that he left his career as a director to be close to his beloved Norma, even as her servant.

Even Joe’s self-hatred is evident when he pushes away the girl he loves because he despises what he has become. One after the other, every character in Sunset Blvd is flawed in a major way, deluded to live a life of misery in pursuit of something better. It’s the harsh reality behind the Hollywood dream.

Often cited as the greatest film ever made, Citizen Kane is divisive among film fans and critics alike, perhaps for this statement alone. Momentous statements aside, it is a film worthy of attentive study especially in regards to its story and directorial choices.

A series of grim shots of an abandoned mansion brings a gothic, almost Draculaesque feel as the film fades in. The image of a once lavish estate that has come to resemble a graveyard starts to take shape.

Snow starts falling and right when you are about to notice that it resembles a snow globe a zoom out confirms your initial instinct. Before our protagonist passes away a single word is uttered; Rosebud. The dome breaks as Kane leaves this world to complete an exquisite metaphor that won’t be realized till the very last scene.

The poignancy of Citizen Kane’s opening scene is undeniable even if unrealized until much later. The intricate process of evoking emotion through imagery alone is evidence of Welles’ masterful direction. The mystery created around Rosebud and the snow globe’s significance, loom over the story during its entire run time and with the sole clue being that the story ends with the death of Kane, the viewer is left unsure as to what to expect.

Alas, the mystery ends up taking a backseat to the solipsistic story of Kane for most of the film. Orson Wellles creates and embodies a commanding figure so alluring that it competes for your attention over the mystery of the Rosebud and wins. 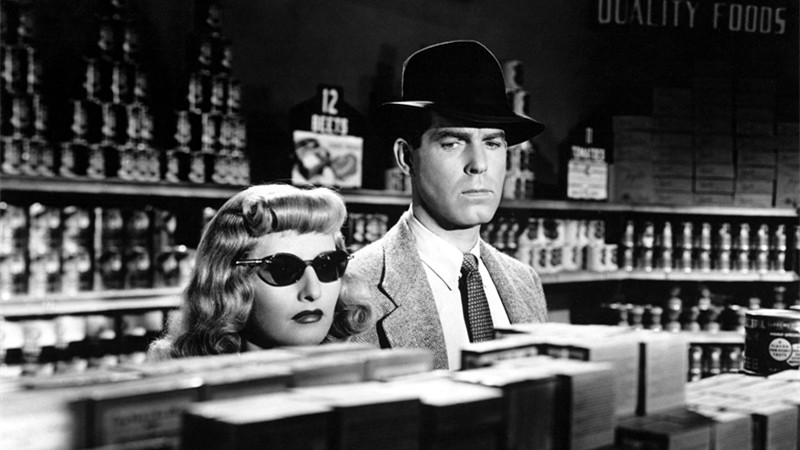 The epitome of film noir, Billy Winder’s Double Indemnity is a true masterpiece that inspired numerous successors of the genre. It is rather unique for a film to blatantly give away so much information, including the killer’s identity from the opening scene and remain an expertly crafted mystery throughout. This is a testament to the ingenious writing skill of both James M. Cain whose novel provided the source material, and the screenplay adaptation from the iconic Raymond Chandler.

The film opens with Walter Neff recklessly rushing to get to his office, visibly attempting to conceal his shoulder, which will soon be revealed to harbor a gunshot wound. His demeanor changes as soon as he steps inside, with Neff trying to appear calm and collected. His hesitance to participate in conversation with the aging security guard betrays that his mind is preoccupied. After he makes his way in his office, he starts dictating his confession giving elaborate details on the Dietrichson insurance claim, the event that set the story in motion.

One would have expected that possessing so much information on the story that early on would hinder the experience or at the very least eliminate the mystery element.

However, Double Indemnity presents a multilayered story filled with what would come to be known as Hitchcockian story elements and the result forces you to be deeeply invested throughout the whole film. Numerous compelling characters are slowly introduced and their fate becomes the viewer’s primary concern in order to fill in the gaps left by Neff’s confession.

This is what makes the film’s opening scene so successful; it manages to reveal the answers to the story’s most important questions, whilst remaining a highly engaging mystery right up until the credits roll.