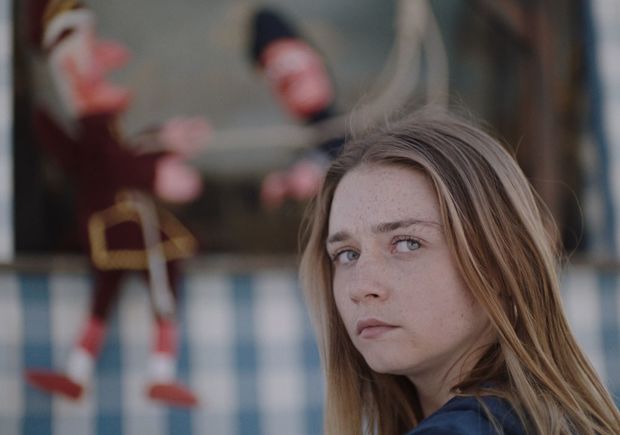 Adapted for the screen by director Barnaby Soutcombe (I, Anna [2012]) from Fiona Shaw’s 2008 play, Scarborough is a smart and slippery inquiry into two problematical student-teacher romances over three days in the eponymous coastal town of Scarborough, North Yorkshire.

As the film opens we are greeted, along with Liz (Jodhi May) by a chatty hotel concierge (Daniel York) and then pulled into the expansive lobby of the Scarborough hotel, and it all seems to forebode some kind of mischief. Cut to Liz guiding a young man, Daz (Jordan Bolger) easily half her age to her room and one wonders if we aren’t in for a frisky comedy of manners?

It’s revealed that Liz and Daz are teacher and student and they’re barely in their room before they’re pawing on each other and making love. Daz rather humorously finishes way too early and is on his phone in a blink as Liz is left to soak in the surroundings, including the lull of the ocean just outside their luxurious suite.

The affair of Liz and Daz runs parallel another hot for teacher affair in the same hotel, this one between 40ish Aiden (Edward Hogg) and “barely sixteen” Beth (Jessica Barden, great in the role that somewhat echoes her recent enfant terrible character on the excellent Netflix series The End of the F***ing World).

Initially, with the steamy shenanigans and off-season resort town vibe, it almost feels like we’re in for a Rohmer-like sex farce, but that’s a misdirect.

While these characters show questionably loose morals and one wonders if the teachers, clearly manipulating their younger companions, don’t deserve the inevitable schism that these sorts of affairs, at least in the movies, inevitably lead to. And their student-lovers, while doe-eyed at times, aren’t pushovers, either. Complicating matters more is that these are a likeable, lovely, even commendable bunch. Their lives are complex, and while they may have spouses or professional careers put in danger, Barnaby doesn’t want to punish them.

At one point Aiden and Beth enjoy some midway rides and devour cotton-candy, to which Beth eagerly confesses: “This is my favorite food!” Aiden, with a diverting roll of the eye points out the obvious, “it’s just sugar,” and this seems to underscore what the adult halves of these twin relationships are abiding; an ultimately empty-calorie affair that will result in a spoiled gut.

The effectively intrusive camerawork, largely hand-held, makes the film more provocative and voyeuristic, and that’s a definitive plus, and while the end twist is a tad too predictable, it’s clear to see why this fine if slight tale makes for a sweet amusement.