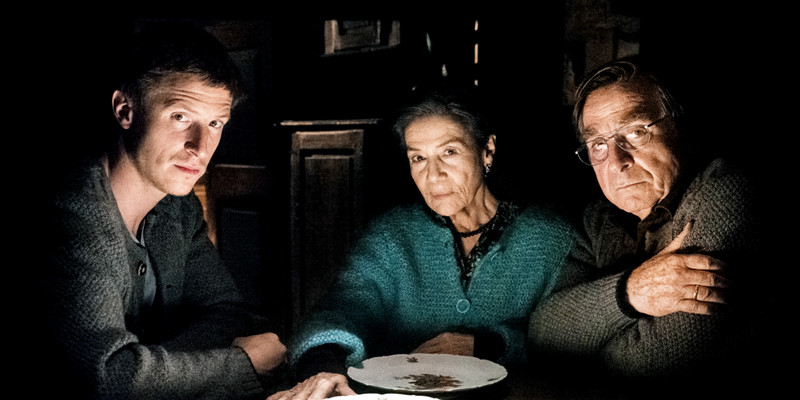 Eleven years ago at VIFF 2008 (where does the time go?) there was a fair bit of praise falling like confetti on writer-director Doris Dörrie’s plaintive and heartfelt drama Cherry Blossoms. An East-West culture clash story with a lackadaisical pace, sumptuous visuals and a peculiar poetry to it all as Dörrie rendered a slow goodbye between long-married couple Rudi (Elmar Wepper) and Trudi (Hannelore Elsner). Her new film, Cherry Blossoms & Demons is a well-meaning but often overworked supernatural sequel centering on Rudi and Trudi’s adult son Karl (Golo Euler).

Not so long ago Karl was an outstanding professional but he’s fallen on hard times; the bottle and deep depression. When he shows up unannounced, panda-masked and three sheets to the wind at his estranged daughter’s birthday party, it’s obvious that he’s utterly out of control and in need of help. Help appears in odd ways for Karl, first in the hard-to-make-out form of a ghost that scares him silly and then in the form of Rudi’s butoh dancing companion from the previous film, Yu (Aya Irizuki). Rudi isn’t particularly pleased to have Yu resurface as his salvation considering she was the biggest beneficiary of his dad’s will.

From here things grow even more muddled as Yu guides Karl back to his family home and ultimately back to Japan before the whole tale plays out and wears out. Thankfully the convoluted course of the film is salvaged rather sweetly by the late Kirin Kiki (this was her final film before she lost her long battle with cancer last year) as Yu’s grandmother. Her scenes, while maudlin at time, are also an absolute delight.

Fans of Dörrie’s first film are bound to appreciate many aspects of this restless and often recherché spin-off, but it’s an inconsistent experience. Sometimes it feels like Jodorowsky-lite and then a sequence of tired Freudian psychology spoils the mood. The messy spirituality and cribbing from Kurosawa’s Ikiru serves to remind us that that’s a far better film, and there’s ample misuse of other tropes (a femme fatale/manic pixie mashup doesn’t help much).

Apart from the aforementioned scenes with the esteemed Kiki, the dance sequences are beautifully choreographed and performed, and that may be more than enough for filmgoers to appreciate and overlook the disparity that haunts and hinders Cherry Blossoms & Demons.