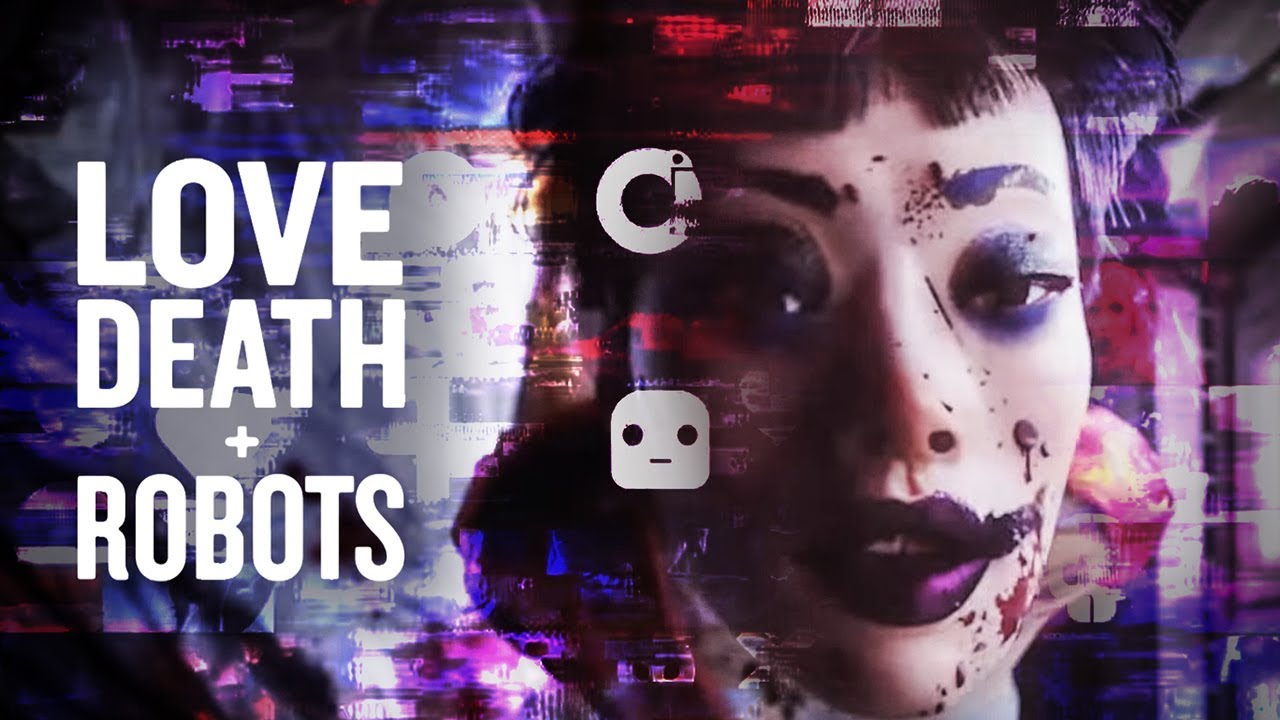 The anthology genre is one of the most interesting in the mediums of both cinema and television, presenting audiences with imaginative collections of bite-sized stories bound by a single idea.

From the notion of technology as a means to an end in Black Mirror, to the colorful and campy world of horror in American Horror Story, you can almost be certain that this innovative genre would at least entertain with variety, even if it fails to mesmerize with quality. Which brings us to Netflix’s Love, Death & Robots, which in its first season, presented the world with 18 different shorts, each providing unique explorations into at least one of the 3 elements of its title.

What sets this interesting new effort apart from the other programmes currently on television, anthology or not, is in the series’ unique approach to storytelling. The showrunners of Love, Death & Robots choose to, for the most part, do away with the limitations of live action filmmaking and instead, turn to animation, where the only restraints are those that exist in the imagination.

With 18 vastly different episodes exhibiting innovations in both storytelling and animation itself, it’s easy to feel overwhelmed by the variety offered by the premiere season of Love, Death & Robots. This list, thus, aims to briefly highlight the merits and flaws of each of the 18 episodes, ranking them against one another and providing you with the necessary information to enhance your viewing experience with the season.

Without further ado, these are the 18 episodes of Love, Death & Robots, ranked. 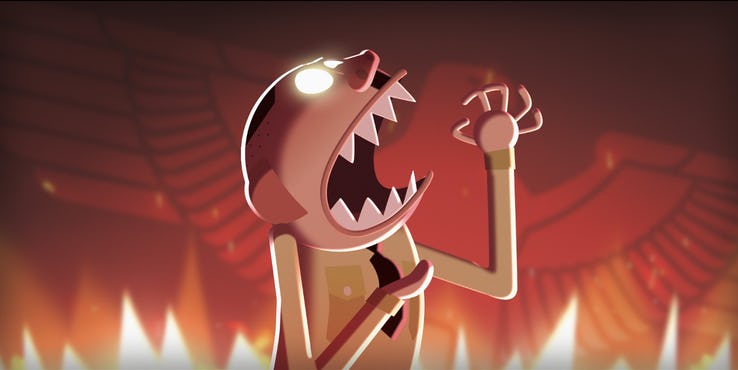 A 7-minute-long visual presentation for a research simulation app allowing the user to view, as the title suggests, alternate versions of history, Alternate Histories could have very well been one of the most memorable episodes of the season. The episode even has a unique story to tell, one that explores, through a fast-paced and whimsical tone, the death of Adolf Hitler in 6 different timelines.

Unfortunately, the strengths of the episode end with its ultimately gimmicky premise. Alternate Histories is a short that lacks innovation in every department aside from the promised idea of the narrative. The toon-inspired animation is charming, but grows stale too quickly.

The peculiar advertisement-esque structure of the narrative also fails to impress. And perhaps the worst sin of all, is the fact that where the episode lacks in quality, it pathetically attempts to make up for with absurdity, as if pandering to the dated thought that simply being random is enough for a lackluster narrative to pass off as comedy.

No other episode of Love, Death & Robots, even if they do adopt a similar tone, seem to be even remotely as irrelevant as this 7-minute-long farce of an episode. 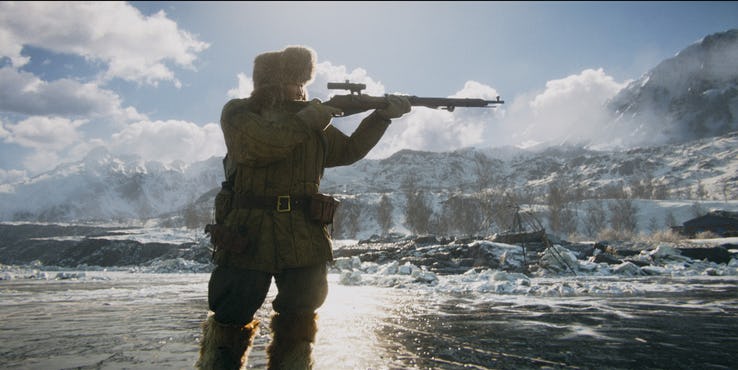 Though the no-nonsense, no-gimmick approach to Secret War is admirable, there’s nothing much to say or even care about this underwhelming finale to the otherwise memorable season. In fact, the biggest takeaway from this episode is the fact that one can, and should, watch the episodes in whatever order they please, because the pre-determined order certainly doesn’t warrant any praise.

Secret War tells the story of a platoon of Red Army soldiers hunting down demonic entities in the wilderness of Siberia. An interesting premise, to say the least, but the 16 minutes that arises from it is an experience more akin to a video game cutscene as opposed to an actual short film.

For such an action-packed episode, there’s also little to no tension in Secret War, save for the ostentatious ending. You won’t come out caring for these characters, or their plights, however hopeless and dire they may seem. You won’t find yourself thinking about the ideas insinuated by the narrative, because there are frankly, none.

What you see in Secret War is what you get, and what you get doesn’t really amount to anything beyond momentary feelings of mild excitement from the mindless and campy action unfolding. 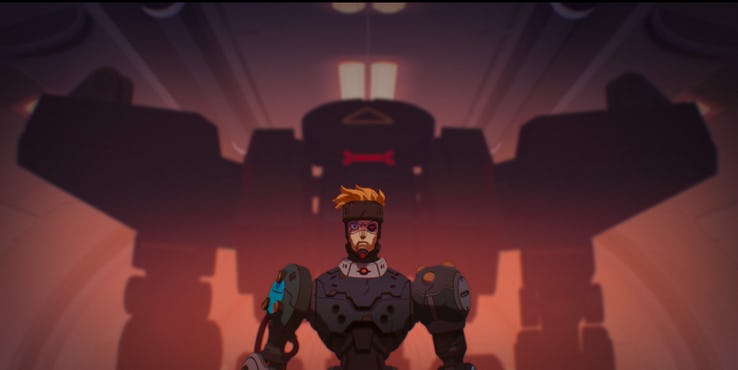 If you’re one to enjoy the videogame series Borderlands, Blindspot may be the episode for you. It features a ragtag crew of cyborg thieves, each with their own distinctive personality, on a mission to rob a well-equipped convoy amidst a desolate road.

As thrilling as this logline may sound, Blindspot is far from the likes of Mad Max or Gearbox’s classic of gaming. The action is decent at best, and the simplistic 2D animation certainly didn’t help alleviate the quality of the episode’s spectacle. Where the episode’s charm resides however, is in its characters.

Watching their different personalities interact with each other and react with the environment provides a sense of entertainment and excitement far greater than the actual action itself. However, like most episodes of Love, Death & Robots, the episode is only strong because of the world it builds, and the world built in Blindspot hints at an instant classic that subverts audience expectations of a desolate wasteland with its quirky and vulgar ensemble cast. But alas, Blindspot left us not with a promise of a memorable adventure, but with an already complete anecdote that leaves much to be desired. 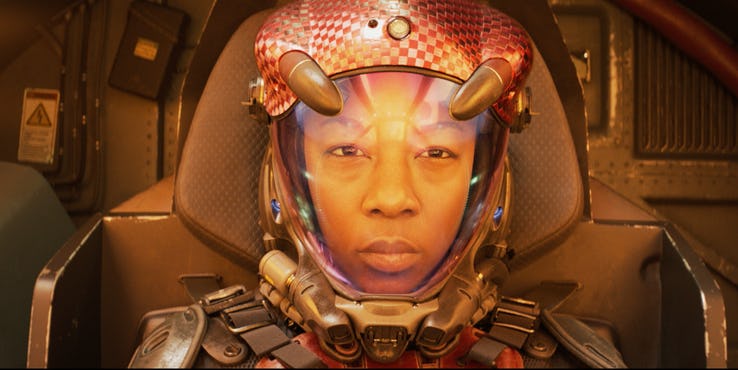 An issue that plagues most episodes of Love, Death & Robots is pace. As mentioned in the previous entry, most episodes seem to set up worlds far more engaging than the actual episode itself, so much so audiences are left frustrated as we ponder over what could’ve been.

In the case of Lucky 13, what could’ve been isn’t so much a potentially fascinating journey that continues after the events of the episode, but a far longer, far more emotionally resonant film with the rushed sequence of events presented by the episode stretched out into something more palatable.

The episode is simple enough. Lucky 13 follows a pilot recounting her missions abroad one “Lucky 13”, an aptly-named dropship thought to be cursed following two fatal missions prior to the protagonist’s command. The episode strives in its display of chemistry, not between two sentient characters, but between a character and the growing love and respect she has for her ship.

One of the only episodes to feature motion capture, Samira Wiley’s performance as the pilot, though limited in range, truly gives the episode the emotional boost it so rightfully deserves, making the episode memorable and impactful even in spite of its generic script and undeservingly short runtime. 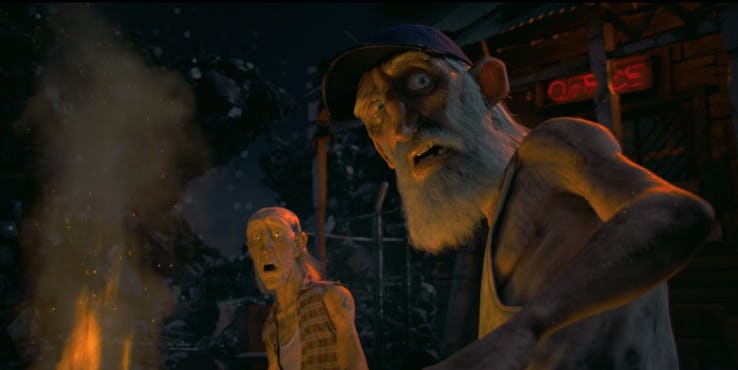 The Dump is an interesting episode. It’s considered by many to be the worst of the season, and for good reason. The story of an old man refusing to relocate from his dumpsite home is senseless at its core, and ultimately achieves nothing.

The characters, from the unapologetic city inspector to the unsightly old man couldn’t be more unlikeable. The animation, though aesthetically pleasing, places an unnaturally strong focus on the vile and obscene. But are these elements really flaws?

The Dump doesn’t stray that far away from the fundamentals of storytelling as does Alternate Histories, neither does it rush its beats as does Secret War. The episode instead, succeeds where both the abovementioned episodes failed.

It’s an episode without gimmicks, one that embraces the absurd, but it does so in a purposeful manner that somehow manages to resonate with its audience in ways the other two could only dream of. The Dump understands precisely what it is and how to best present itself.

Even if what it is isn’t all that great. 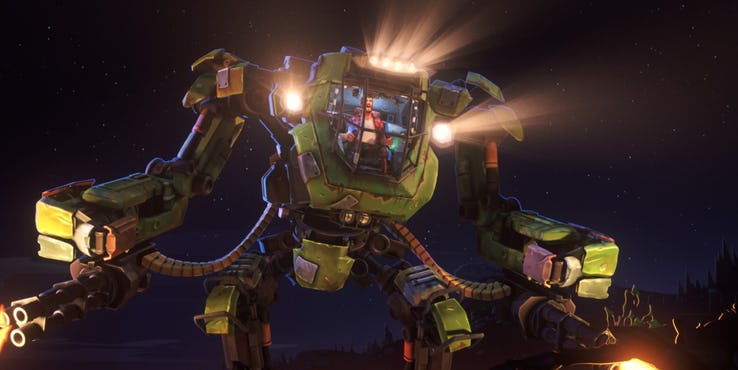 Rednecks in mech suits fighting aliens. What more is there to say about Suits?

In the same vein as Blindspot and Secret War, only with a far more superior execution, Suits is an episode that hooks you in with its high concept premise and makes you stay with its memorable characters. It doesn’t push any boundaries in storytelling and animation, but the image of a heavyset redneck firing the machineguns of his mech suit at an endless onslaught of ugly aliens will never not be a satisfying display of spectacle.

The episode does dip in quality at certain moments (like in the extremely unearned twist ending), but overall, the experience of the episode is one akin to a modern action blockbuster. It’s perhaps the most crowdpleasing episode of Love, Death & Robots and screams likeability from start to finish.

And there isn’t much else to Suits beyond that. 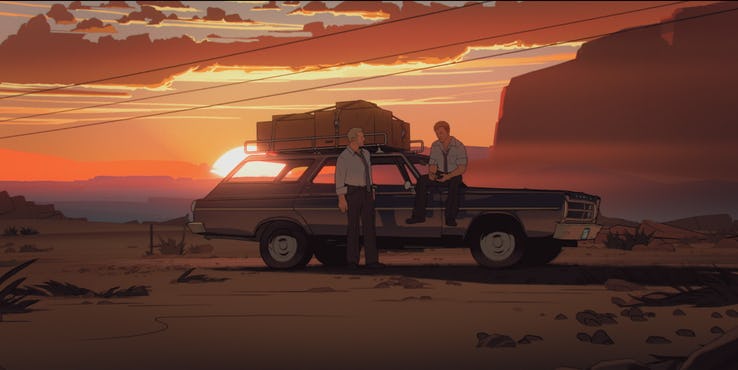 Perhaps the simplest, yet undeniably one of the more meaningful episodes of Love, Death & Robots, Fish Night tells a tale of two salesmen stranded in the desert. With an animation style similar to that of Telltale Games, the episode offers surprising room for interpretation and analysis in spite of its inherent simplicity.

The episode serves the greater narrative purpose as a tiny little allegory of fatherhood, in the same vein as the classic tale of Icarus. It also uses the scenario of being stranded in the desert as an opportunity to test the medium of animation by conjuring up the hallucinations of the narrative – fantastical images of colorful, glowing fishes illuminating the otherwise desolate night sky. This mesmerizing display of marine life is not only a delight to the eyes, but purposeful, illustrating the dangers of poor judgement and flying too close to the Sun.

Though Fish Night may be one of the less flawed episodes of Love, Death & Robots, the inherent simplicity of its narrative does make the overall experience of the episode pale in comparison towards the more ambitious episodes. 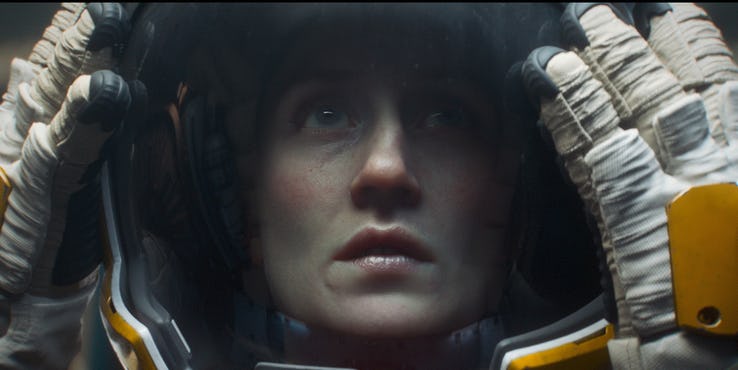 Helping Hand is a simple, single scene episode that sees an astronaut fighting desperately for her life following a spacewalking accident. If you’re one to enjoy Alfonso Cuaron’s Gravity, Helping Hand would certainly be the episode for you.

Where Helping Hand shines isn’t so much in its narrative, animation, or even in its characters. It shines in pace. The command of tension in this episode is perhaps the greatest in the entire season.

Watching the protagonist rendered helpless as she’s forced to make split second decisions while her oxygen slowly diminishes is tense enough, but with the added element of safety being just a few degrees out of reach, Helping Hand creates a truly immersive cinematic experience that’s certain to make your heart race.

It may not quite be as successful in building a world, nor does it offer something substantial beyond its single scene, but with such brilliant execution, Helping Hand certainly engages in spite of its lack of complexity. 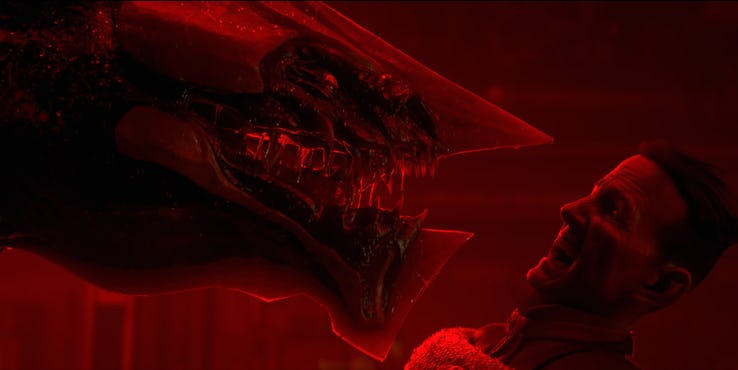 Sonnie’s Edge takes place in a purposefully-conceived dystopian society, following the titular Sonnie, an individual who remotely controls genetically engineered monsters in underground pitfights, as she prepares, engages, and recovers from one such battle.

Though the pace and dialogue of the episode leaves much to be desired, everything else is top-notch. The world built by the short is brilliant, and the characters that populate this world feel incredibly vivid and bursting with personality.

The battle itself is gory and ultimately cathartic. And the ending. Without going into much detail, the ending of Sonnie’s Edge is one of the absolute best moments of the season. It adds so much to the experience of the already engaging episode without feeling far-fetched or unearned.

Sonnie’s Edge certainly set the standard for the episodes to come, and though not all episodes managed to live up to this level of quality, it is a pleasant thought that a good half of the season did.