Sex, violence, murder, and perversion have been forever present in mankind. Since the wars between Athens and Sparta up to the technological conflicts these days, the of use physical force and violence are explored as forms of moral and psychological domination. In cinema, violence began to be exploited when society lost its little modesty; thus, filmmakers decided to portray this part of everyday life.

Other factors that gained prominence from the flexibility of society were the iconographic representation of explicit sex, rape, and also eschatology. Hippie culture, which was seen as an affront to the bourgeois elites, helped in pushing for the rights to express such content in cinema. It’s undeniable, too, that in the underground, the content quoted has always been explored in a more explicit and experimental way.

In this list, scenes of violence, explicit sex, and grotesque acts included in great films will be described. Here are 10 great movies that are hard to finish.

One of the great names of modern Italian cinema, Bernardo Bertolucci is also a controversial figure in cinematic history. Working with masters such as Sergio Leone and Pier Paolo Pasolini, he became one of the most influential and original directors of his generation. His major works came from international partnerships with France and the United States, directing icons such as Marlon Brando, Robert De Niro, Jean-Pierre Leaud, and Peter O’Toole. His resume features varied awards, such as an Oscar for Best Director and a BAFTA for Best Film for his work “The Last Emperor” (1987).

Of course, his most controversial film is his psychosexual drama starring Brando and Maria Schneider: “Last Tango in Paris.” In this 1972 movie, a lonely widower travels to Paris to forget the suicide of his wife. However, he ends up falling passionately in love with a young French woman. The two, then, live an intense and anonymous relationship purely based on sex.

The great debate that permeates this film is relative as the infamous rape scene with a stick of butter. After the recording, Maria said she felt violated after that sequence, since she had no idea that something like that would be recorded. Then, both the protagonist and director became poorly liked by the most enlightened audience.

Scenes like this make this film hard to finish. With a slow rhythm and high sexual content, Bertolucci creates a monotonous but deep and reflective atmosphere. However, the visceral and somewhat violent passages of sex leave the spectator uncomfortable and with some fear of what may come over the course of the film.

The second Italian director on the list, Pier Paolo Pasolini is a very important name in cinema and the political militancy of the 1960s. A poet, writer, communication theorist, and filmmaker, with a vast and enviable repertoire of talents.

Of extreme detail and istic character, his films are appreciated and worshipped by students and film teachers. In addition, he always sought to criticize the high society, such as “Pigsty” and the Catholic Church, as it did in “Decameron.” It also had an intrinsic link with the proletariat and communist parties – elements present in almost all of his work.

In “Saló,” Pasolini shaped one of the most disturbing films in cinema history. In this, a group of young Italians is captured by fascists allied with the government of Mussolini in the 1940s. There, they undergo several perverse trials to sexually please their kidnappers. Filled with deaths and torture, the teenagers are ravished in every possible way, while their now-owners enjoy the freedom and enjoyment of life.

Perversion is perhaps the word that best defines “Saló.” Inside the film, the 12 captured youths are forced to pass through three circles filled with depravity and violence. In the first of these, they are raped to satisfy the sexual desires of the fascists; in the second, the circle of feces, all are obliged to participate in eschatological rituals where they ingest feces; and finally, the circle of blood, in which torture, physical violence, and death dominate the environment. Only such a description can disgust the reader, as the film will certainly cause one to vomit.

At only 35 years old, this young French filmmaker and actress has been nominated and awarded in Cannes several times. Her first feature film, “Raw,” was a complete critical and public success.

With a medium-sized budget and a little-known cast, the director was able to extract a visually stunning and narratively intriguing film. Filled with blood and violence, countless viewers reported vomiting during the movie showings. This is how, splendidly, Ducournau is building her film career. Is she the new big name of the postmodern French cinema?

The plot follows the young vegetarian Justine, who is about to enter the first year of her college in veterinary medicine, where her sister studies. Soon, on their first day, freshmen must pass a traditional university ritual: eating a piece of raw meat.

Reluctant and against her will, the protagonist ends up ingesting the food. Days later, however, the taste of the flesh did not seem to have came out of her mouth; the girl, now, is fascinated by such flavor. This paranoia is developing more and more, until Justine decides to taste human flesh.

In “Raw,” several factors make this work a difficult film to watch until the end. From extremely convincing performances – which leave the viewer terrified and dazzled – to extremely real practical effects, everything makes the audience believe that it is very close to reality. In addition, all scenes involving cannibalism mixed with totally visceral sex are recorded explicitly, so that no details of the actions on screen are lost. 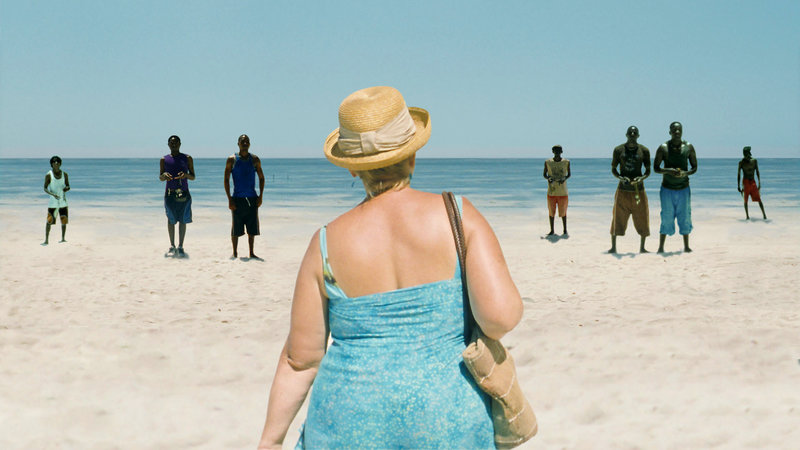 Austrian director Ulrich Seidl is one of the most hated filmmakers on the planet in recent years. Severely criticized for his irreverent, carefree, and disrespectful way of filming, Seidl continues with his style of making films that defy the boundaries between documentary and fiction. His famous trilogy of “Paradise: Love,” “Paradise: Faith” and “Paradise: Hope” had great success in festivals in Europe, but above all, the trilogy left people angry and disgusted.

Nominated for the Palme d’Or in Cannes, “Paradise: Love” is the main pillar of this iconic trilogy. In this film, Teresa, a 50-year-old Austrian woman, travels to Kenya. However, the purpose of the tour is not the stunning beaches or the beautiful landscapes: Teresa is there for sex tourism.

By joining with another middle-aged woman, the protagonist begins to enjoy more of the services of Kenyans – who begin to charge increasingly higher prices for work. This makes her think about her own personal image and appearance.

The language of this 2012 work is expressed as if it were a fictional drama. However, over the course of the film, it becomes more explicit that the director takes advantage of the lack of command of the language of the Kenyans to designate tasks that are completely subhuman to them.

In one scene, a man dances naked for four women, without understanding at all what it is; he only does it because he knows he will be reimbursed. Sequences like this can leave anyone’s jaws dropped and leave them utterly abhorred.

Michael Haneke is one of the most versatile and virtuous filmmakers nowadays. An example is the comparison between two completely different films: “The Piano Teacher,” a sexual thriller; and “Amour,” a delicate film about passion.

With awards from Cannes, the Academy Awards, the Golden Globes, the BAFTAs, and a César, his resume is certainly one of the most complete of current cinema. His most awarded movies are “Amour” and “The White Ribbon.”

One of his first feature films is “Funny Games,” nominated for the Palme d’Or in Cannes. In this film, a quiet Austrian family goes to their country house to enjoy the holidays with their little son.

After settling in the house, the family receives a visit from two young men, Peter and Paul, who appear to be two people of extreme courtesy. However, such behavior lasts a short time and the two begin to psychologically and physically torture the three members of the family, using sadistic and violent games.

With this short synopsis, one can already imagine the content of the work. Violence, torture, sadism, and psychological pressure are just some of the challenges this simple family faces with both young men.

In “Funny Games,” the spectator is put to the test every few moments, because with each new minute, another type of violence is committed. No one escapes the hands of Peter and Paul, not even the family dog. Screams, groans of pain, and sounds of flesh being torn apart by the knives and weapons of the two young men dominate the film, leaving anyone uncomfortable who may be watching the movie.