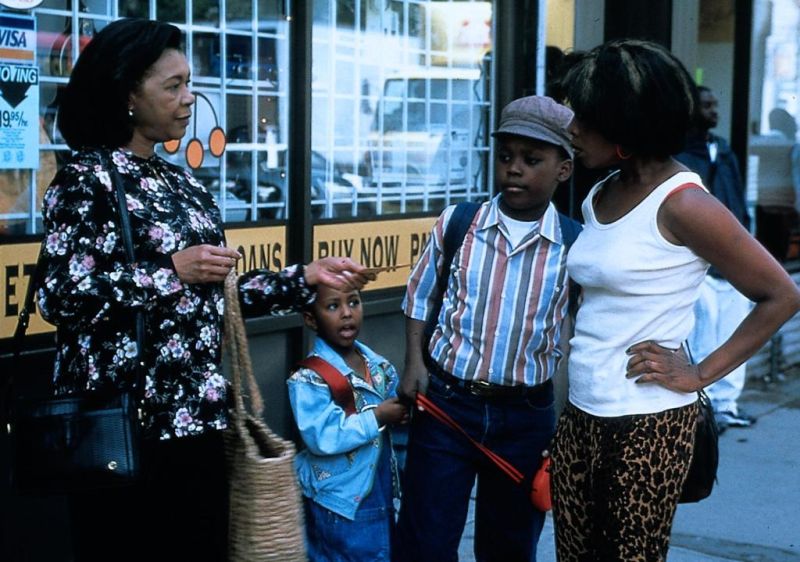 Poet, singer and civil rights activist Maya Angelou is perhaps best known for her series of autobiographies. Not as many people know that she has also a directed a film and it was fantastic. Angelou was quoted saying she was inspired to direct the film, because she has been “formed and informed by film.” Beautifully put for sure, since the film really can be an effective method of creating social consciousness.

For her film, she brought a terrific cast led by Alfre Woodard. Woodard gives one of her best and sadly criminally underrated performances as Loretta, who lives in the Chicago projects with her mother Rosa Lynn (Mary Alice) and her two children. She’s unemployed and her use of drugs and alcohol causes problems, including the fact that she starts to neglect her autistic daughter. Rosa Lynn sends her away to the family’s hometown in the Mississippi Delta, where they spend the summer with Loretta’s Uncle Earl (Al Freeman Jr.), and this three-month exile will be a journey of self-discovery.

The film is about so many things but most importantly, it’s about family. It’s a “feel-good” film but with depth and is made with intelligence. Even though it features Wesley Snipes in a supporting role who was a fairly known actor in the ‘90s, the film got overlooked by mass audiences.

Skillfully made, “Angst” is  loosely based on real-life mass murderer Werner Kniesek and it is especially recommended to those who enjoyed “Henry: Portrait of a Serial Killer,” even though they both are unique films in their own way.

Featuring a fantastic performance by lead actor Erwin Leder as an unnamed serial killer who just got out of prison, the film is more about his deranged psyche rather anything else, and through excellent camera movement and our main character’s real-time narration, we not only witness his troubled mind, but we feel the genuine terror.

After all these years, “Angst” is still not an easy film to watch. Editing techniques also add a lot to the film. The movie, which director Gaspar Noe keeps mentioning often in his interviews, has been repeatedly banned all over Europe and was not distributed in the United States until just a few years ago.

It was not an easy film to make and due to censorship, the film hardly made much money and didn’t gain enough popularity. Director Gerald Kargl has never made a film again, but instead focused on working on promotional films and commercials.

A very impressive mixture of violence and black humor, this is an interesting satire on the “man on the street,” mockumentary-style film. The film is made by four student filmmakers, led by director Rémy Belvaux.

The film’s writers, Belvaux, Benoit Poelvoorde and Andre Bonzel, all appear in the film using their own first names. It’s basically about a film crew following a very violent killer about his daily routine but after some point, they start to lose their objectivity.

The film is so lively, realistic, and (sharply) clever that when you watch it, you get true aesthetic pleasure, despite the fact that the film is extremely brutal, because here you will find mass murder, rape, the murder of a child, and even more violent stuff.

Poelvoorde is amazing at creating a very interesting killer profile. He doesn’t actually have much of a motive to kill people – sometimes for pleasure, sometimes for money – and then again at some point, he comes off as someone intelligent or humorous.

The whole experience is very unpredictable in general. The black humor works perfectly here and the acting is also surprisingly strong. So good that sometimes you wonder if it’s all really fictional or if it’s real. Like “Angst,” it’s also not too much of an easy film to watch for everyone, but it certainly is worth giving it a try.

“There’s a game out there, and the stakes are high. And the guy who runs it figures the averages all day long and all night long. Once in a while he lets you steal a pot but if you stay in the game long enough, you’ve got to lose and once you’ve lost there’s no way back, no way at all…”

One of the most controversial and most talented screenwriters among those blacklisted and imprisoned for their refusal to cooperate with the Congressional anti-Communist hearings of the late 1940s and 1950s, Dalton Trumbo has directed only one film: “Johnny Got His Gun”, based on his novel of the same name.

Getting even wider attention after being used in Metallica music video, “Johnny Got His Gun” is a moving and shocking experience. It’s an experience that will make you realize horrors of war once again. The film is about a man named Joe Bonham who was hit by an artillery shell during World War I and has lost his eyes, ears, mouth, and nose.

The whole film, just like Joe, drifts between reality and fantasy. It’s a film that is disturbing to watch at times; it rarely has war sequences yet it manages to be anti-war, and it’s not without its criticisms of nationalism and organized religion.

It also should be noted that Luis Bunuel did some uncredited writing on the film. And it has a terrific cast, including Donald Sutherland as Jesus. It’s recommended for everyone to check out Donald’s reading of “What is Democracy?” from PBS American Masters.

What a crime that this film was a commercial and critical failure when it was initially released. One of the richest, most haunting films to emerge from the ’50s and a Southern Gothic masterpiece, “Night of the Hunter” is a mind-blowingly amazing achievement of cinema, full of great shots, haunting Grimm fairy tale overtones, and impressive set design. Everything about the film is amazing.

The movie was directed by Oscar-winning actor Charles Laughton, and his first (and only) film will surpass any expectations you have from it. It has such a rich atmosphere that it feels strictly avant-garde for its time, as if it’s a mix of surrealism and German expressionism.

The plot focuses on a corrupt minister-turned-serial killer who attempts to charm an unsuspecting widow and steal $10,000 hidden by her executed husband. This dark tale also features an impressive performance from Robert Mitchum as well. Mitchum is simply glorious and magnetic in the lead role and should have gotten all the awards there were back in that time. A Totally excellent casting choice.

The film also features excellent camera work; thanks to cinematographer Stanley Cortez, we get a lot of memorable imagery that is poetically beautiful. In fact, the direction here is great in every way possible. Even the most random shots are carefully studied.

The script is also sublime. The river sequence is particularly a jaw-dropping moment. It’s also a film that still remains somewhat disturbing after all these years. Even though most sites put it under the “thriller” category, one can say it’s actually a horror story. And a very strong one.