In a province of Spain during the early post-Spanish Civil War years, an innocent young girl undergoes an emotional traumatization after watching the film “Frankenstein.” She perceives the scene in which Frankenstein intends to make a girl float in a lake as an actual attempt to drown her. Henceforth, Ana develops a deep fear of evil, personified in Frankenstein’s figure, and her vivid imagination finds inspiration in her real-life circumstances to be expressed.

The beautiful and innocent film “The Spirit of the Beehive” moves from a child’s fantasy sphere – invented with the scope to construe and simultaneously dissemble the cruel reality – to the delicate demonstration of the distressing limitations and spiritual deprivations enforced by dictatorship.

The main characters of the film carry a tormenting load in their hearts. Ana’s father is a beekeeper, psychologically exhausted by the war, working constantly on books. Her mother is silently grieving the loss of an old lover, writing him countless letters. In the meantime, Ana believes that Frankenstein’s spirit has possessed the body of a harassed soldier. However, she dares to take care of him.

This poetic and gently penetrating film is substantially about the constant hidden or evident forms of violence, the substantial spiritual solitude, and mostly, the emotional impact of vice on crystalline child souls.

“Lost Highway” is a delirious story about a man who finds himself defeated in his efforts to conquer his unreachable and emotionally vague wife. The spectator has to think out of the box, bring to the surface the most insightful compound of his imagination, and even if one needs to watch this film more than twice, the message will be found.

Fred (Bill Pullman) is a jazz musician who kills his wife, Renee (Patricia Arquette), under indefinite circumstances. While he is locked in his cell, he imagines himself as a car engineer, getting involved in a relationship with a customer’s wife, also embodied by Arquette. The mental creation of this setting is a struggle by Fred to give his relationship with Renee a second chance.

However, the distinction between these two settings does not mean to distinguish reality from fantasy. In both situations, directing elements are present that dispute the concept of objectivity. Although the protagonists keep their discrete characteristics in both cases, the space and time features intertwine and counteract in a nonlinear way, leading to the inevitable assumption that the realistic version of the story is not specified.

The key role for the film’s comprehension is played by the pale man with the piercing black eyes. He is the only character without a name, appearing so as to post crucial questions to Fred and reconstruct the perceivable boundaries of reality and time evolution. This man, in his enigmatic and eerie appearance, expresses the quintessence of “Lost Highway” and possibly Lynch’s mindset: in a higher dimension, above the interpretation of facts, the significance of the intellectual awareness and filtered view of reality is tracked down.

Even though “Lost Highway” is quite controversial, it is probably the most comprehensive, complete and sincere film from David Lynch. 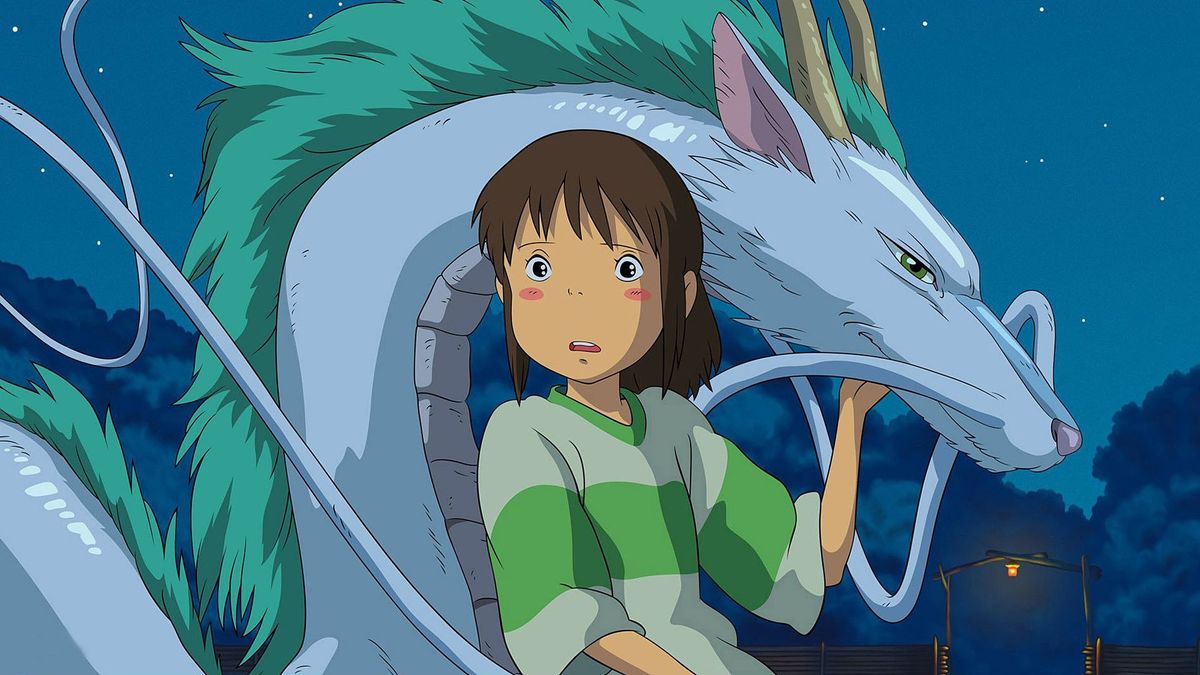 Hayao Miyazaki’s most successful film “Spirited Away,” apart from possibly playing the part of the first psychedelic experience in life, calls upon sensible children and moreover, upon adults who are still children deep in their hearts.

This intelligent, timeless, and esthetically valuable piece of art elaborates on various topics, such as family values, strength of character, thrift, insight, and environmental consideration, making good use of traditional myths. Additionally, the film manages to deconstruct the stereotypical essence of common fairy tale figures.

Chihiro, a 10-year-old girl, goes on vacation with her parents. Once they reach their destination, Chihiro discover a bewitched bathhouse. She is introduced to the place by a young boy, and thus she begins an unexpectedly long and adventurous trip through the haunted and confusing trails of this hidden wonderland.

During her dreamlike experience, Chihiro comes across mysterious creatures and finds out that the natural rules are unable to dominate in this place. Even though a mystical ambience is diffused all over the place, Chihiro’s child wisdom leads her to bravely face all the occurring circumstances and deal with the actual substance that is hidden behind the otherworldly creatures she has met.

At the end of her navigation, Chihiro has succeeded in completing various tasks that took place in order to teach her important life lessons, bring to her mind the significance of granted treasures, and change her consideration on reality forever.

“The Wizard of Oz” has inspired the imagination of children for decades, and it’s never going to stop performing this duty, as long as children exist.

Little Dorothy considers her hometown to be too cloudy. A vicious neighbor wants to steal her beloved dog, Toto. Thus, she decides to escape from home in order to discover a place over the rainbow, where clouds are left behind and evil doesn’t exist. However, her plans are overturned by a cyclone. Despite this, she accomplishes her trip to a place over the rainbow, within her subconscious dreamlands.

In this magical place she meets a wise scarecrow without a brain, a heartless but sensitive tinman, and a timid lion. In addition, she finds out that even the places over the rainbow encompass wicked witches who try to hurt the innocents.

Soon, she feels like returning home, so as to be together with her family. Accompanied by her new friends, she attempts an investigation for the notorious Wizard of Oz, in order to find out a way to go back home, and moreover, she wants to find a brain, a heart, and a sense of courage for her friends.

During this trip, Dorothy discovers that wizards are invented by humans and evil can be destroyed by the simplest components of nature. Still, foremost, she has been taught that traveling in foreign lands is not a way to avoid clouds. Even though the rain will come, there’s no place like home.

“The Tree of Life” is a deeply philosophical piece of the seventh art, observing the mystery of life through two different optical lenses.
On one level, the film sets out on a journey at the first existential steps of the universe; it follows the orgasmic progress of a primal microcosm, then the growth of trees, the occurrence of the ancient beasts, and finally the crucial point of beginning of the mankind. On a second level, the film focuses on a family of four, appointing the intrinsic significance of all their life stages.

Thus, the film’s spiritual trip finds a destination in Texas in the 1950s. A married couple makes a son, and then another one. The babies are introduced to life by their mother. She teaches them their first words, the beauty of nature and the earthly rules. During their growth, the boys find leniency and tenderness in their mother, while their father expresses the sense of discipline and severity.

Reaching adulthood, one of the sons realizes that his parental figures, through their grace and defects, reflect on the dual face of life; that eternal face, being good and bad at the same time. Experiencing a lifetime means to grow, to change, to reach manhood, to enjoy and suffer.

Terrence Malick’s “The Tree of Life” leads the imagination to the tracks of all those accidental but absolutely complex happenings that resulted in the current form of our world. Its unrepeated grace lies in the fact that it posts questions about people’s place in this magical universe, without shrinking its value.

In an imposing but chaotic chateau, hosting wealthy and always elegantly dressed people, a man finds a woman whom he met last year at this very chateau. He approaches her and mentions their promise to meet again this year. However, the woman behaves mysteriously and claims that she has no recollection of him or of this promise.

Still, her foggy attitude disguises the actual events and her deeper emotions. She is on vacation with her overbearing husband like last year, according to the man’s memory. Sometimes she seems to need communication, and sometimes she seems to fade out in the distance, like an ethereal creature.

A mysterious ambience progressively rises in this film. Many events are described, but nothing claims their actuality. The spectator can only imagine and never come to a conclusion. Maybe something dramatic took place; a crime, even a death. It’s not really what matters here. The story is about a man and a woman being together and at the same time miles away from each other.

A lonesome writer spends his last mundane day visiting his beloved memories and trying to rescue a child who’s supposed to be an illegal immigrant. While walking with the young boy, he narrates a story about an old poet who used to buy words from people, so as to compose poetry. His imagination brings the poet to life within his period clothing, writing a poem in a castle, seeking words from fishermen, and even sitting as an otherworldly creature on a bleak contemporary bus.

The melancholic writer carries away the spectator to live with him, within the limits of a day that encloses a whole eternity. The film is a journey from the most shiny places under the sun, to the most shady and tearful corners of this world.

The setting of the present is defined by emigration, criminality, alienation, and solitude. On the contrary, the writer’s memories are sparkly and full of laughter, love, and poetry. His wife tells him words of desire, standing graceful in her white dress. Their daughter is born, and joy overwhelms their home close to the sea.

“Time is a child playing the dice,” a boy says at the beginning of the film. The times are definitely unforeseen. The places that hosted the most valuable moments will become dirty and wet. People will create borders and drawbacks. Still, the times will change back again, as long as poets exist silently, yearning to buy words. Their poetry will overtake any kind of borders.