Color in Nicolas Winding Refn’s films is not just an aesthetic choice – it’s a physiological need. This is because, due to his colorblindness, the Danish filmmaker cannot see midtones. In fact, if his movies were not so full of contrast and saturation, he wouldn’t be able to see the shapes presented on the screen. But he did not felt undermined by this limitation and used it as an architectural framework on his work. Thus, for Refn, filmmaking is not a logical process, and color serves as a methodological tool for the expression of the force of our emotions.

As Apichatpong Weerasethakul once stated, in filmmaking “rhythm is more important than story.” This is put in practical use in “Only God Forgives,” in a morbid, dreadful and violent way in the use of deep shadows, but more importantly, in the energetic and vigorous colors that oppose that substantial darkness.

The contrast that originated from this connection provides a possibility for the communication of the brutal and cruel human relationships that the movie portrays, because “the stronger the contrast, the more the confrontation will be dramatic,” Refn claims.

Therefore, it is safe to say that the dramatic use of color in both “Only God Forgives” and in Refn’s filmography is an opportunity to allow the fundamental chaos of existence express itself in a very stylish and sublime way through film mechanisms.

It is difficult to identify the most colorful Wes Anderson film, since in all his movies, color plays an important role. But it’s in “The Grand Budapest Hotel” that this element is implemented with most skill.

Colorist Jill Bogdanowicz, who employed DaVinci Resolve as the film’s main grading software, used an old photographic process called Photochrom as inspiration to develop the rich and vivid color palette of the film. This early colorization method served as a starting point to cultivate the desired look of the three different timelines (1930s, 1960s and 1980s). Each of these periods was stylized according to specific production and costume designs values, generating the classic Wes Anderson quirky but sweet filmic look.

For Anderson, it’s all about these type of details: “That’s the kind of movie that I like to make, where there is an invented reality and the audience is going to go someplace where hopefully they’ve never been before. The details, that’s what the world is made of.” Color is a necessary part of this fantasy.

Jacques Demy was an outsider in the French New Wave movement. He was apparently, unlike his fellow contemporaries, not so interested in creating a filmography based on the critique of the cinematographic and narrative tradition that the group famously opposes. Nonetheless, he was a more delicate and subtle revolutionary. This can be verified by the use of color on his films.

In his 1964 film “The Umbrellas of Cherbourg,” color becomes a perfect and accurate reflection on one hand of the euphoria of first love and, on the other hand, of the angst produced by the absence of loved ones. All of these emotions are portrayed in a bright, sparkling and glittering color palette that sometimes contrasts with the characters’ desperation and, at other times, accentuate their joy.

The very cheap but overly saturated Eastmancolor film stock used by director of photography Jean Rabier, mixed with the beautiful performances by a young Catherine Deneuve and Nino Castelnuovo, along with Michel Legrand’s harmonic but excessive score, makes “Umbrellas” a charming experience that nobody should miss.

One of the most colorful movies of all time certainly is Zhang Yimou’s martial arts film “Hero.” The Chinese filmmaker, well known by his carefully studied shots, chose to work with the Australian-Hong Kong cinematographer Christopher Doyle for his ability to improvise, which is precisely the opposite approach.

The film is set in 227 BC and follows the assassination attempt on the King of Qin while he tries to unify the seven kingdoms of China. The storytelling structure, unlike other films, is subordinated to to color. “Part of the beauty of the film is that it is one story colored by different perceptions,” Doyle claims.

This notion is clearly implemented in the organization of the piece because each story is presented in a particular color hue. The first one, using red, is a love story between two assassins; the second is blue because the location was a lake; the third one is white to highlight the tone of the desert; and the fourth story is green because both they run out of options and green has been used by Doyle as the color of memory.

Keisuke Kinoshita’s “The Ballad of Narayama” is a haunting and often forgotten masterpiece. This melancholic but beautiful film tells the story of an ancient Japanese practice called “Ubatuse,” a tradition that states that when food is limited and elders have reached a certain age, they have to be carried to the Narayama mountain and wait there for their deaths.

In this 1958 film, color must be understood in accordance with the principles of Kabuki theater. Set and costume design plays a key role in this kind of Japanese musical drama (Ozu’s “Floating Weeds” is another great example of how this type of dramatic presentation works). In this regard, as well as in other cultures, color functions symbolically.

The overwhelming golden tone operates, as Henry Dreyfus states, as “the sensation of looking upon waving fields of ripened rice stalks.” For Japanese culture, the rhythm of life is reflected in nature. 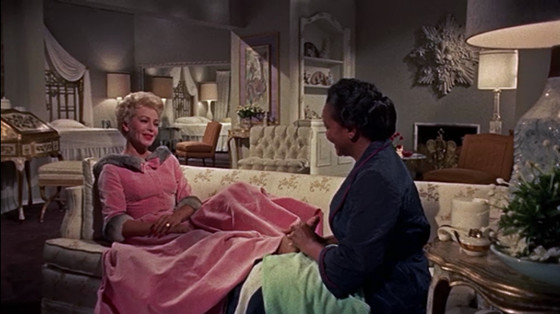 Douglas Sirk’s final film is a banquet of emotions where tragedy reveals itself with all its significance, meaning and weight. The German filmmaker and king of Hollywood melodrama took John M. Stahl’s (another great figure of the subgenre) 1934 black-and-white “Imitation of Life” and remade it into a stunning piece based on the novel by Fannie Hurst.

The film’s use of color is in concordance with the gender and class issues that Lora Meredith (Lana Turner), Sarah Jane (Susan Kohner) and Annie Johnson’s (Juanita Moore) tormented relationship depicts. But it’s in its racial aspects (after all, color metaphors have been a tool for social control over African-American and non-white populations for centuries) that the Eastmancolor film stock displays its power.

In the final scene, color and music converge in an intense exacerbation of regrets, guilts and griefs, evoking a constant task in the life of this author, namely, to create “dramas of swollen emotions.”

The partnership of Michael Powell and Emeric Pressburger produced some of the best movies of British film history. One of them is the 1947 psychological drama “Black Narcissus.”

The film follows a group of nuns who build a school and a hospital over an ancient temple in the Himalayas. Without expecting it, some problems arise between them. As a consequence, local British agent Mr. Dean (David Farrar) will have to intervene, producing intense sexual tension in the religious community.

Color highlights the contrast among faith and sexuality, purity and impurity in a beautiful and bold technicolor presentation. Although Powell claimed that “truth lies in black and white,” maybe in color there is something more profound than truth.

The cinematographic value of Tarsem Singh’s “The Fall” is based, without a doubt, on a delicious visual intensity. This is the reason why it has been accused of being a “style over substance” film. But as a matter of fact, this Indian-American filmmaker seeks this result voluntarily; in other words, to produce a film from a visual perspective.

Roy Walker (Lee Pace), an injured stuntman, is almost paralyzed at a hospital after one of his tricks went wrong. There he meets Alexandria (Catinca Untaru), a young girl with a broken arm who, like him, is recovering at this medical center. In order to get some morphine to commit suicide, the man tells the little girl a story about six revenge-seeking heroes and their quest to defeat an evil ruler who committed a crime against them.

Shot in more than 20 countries over four years of production, its use of color is representative of the ambition of the filmmaker to create a story full of fantasy that boosts the power of imagination. “The Fall” is a beautiful film and its use of color operates as the image of a mythic dream.

Author Bio: Diego Jorquera is a filmmaker from Viña del Mar, Chile. When he’s not doing anything related to film, he’s probably summoning ancient spirits in some remote forest.

1204
SHARES
FacebookTwitterSubscribe
Subscribe via Email or RSS Feed
Pages: 1 2
Comments (19)
Most Colorful Movies of All Time