In Ancient Greece, scenes of frenetic, satirical copulations were depicted on vases, when at the same time the ideal love was of a platonic nature.

During the Middle Ages, sex was just for reproduction. Romantic lovers of the epics never had sex, and their love was as sacred as the divine love for God.

I don’t know what was happening at the same around the globe, in China, the Americas or in Africa (even though the Kama Sutra gives us a colorful idea of what Indians believed about what sex – the divine union of two bodies – had to do with love) but I strongly believe that every culture treated this very specific feature of human nature – the search for pleasure and the search for fulfillment through another person – and the relationship between them, trying to find answers.

Modernity rediscovered the human body aside from religious or other impediments. Cinema is child of this modernity – the seventh art – and very soon tried to answer to questions about love and sexuality. However, this topic was mostly dealt with after the 60’s cultural and sexual revolution that changed forever modern family’s landscape and challenged traditional sex roles. Today, living in the wastewater of those staggering decades, cineastes from all over the globe come over and over to the question of how sex is related to love. Or vice versa.

There could be many films to add to this list. Even though it covers the last 40 years, the emphasis is given to recent movies, as each society at each time tries to give its own answers to this topic, which is fundamental for human relationships. The answers quite differ, and some are rather surprising.

The typical case of a director and scenario writer whose first picture was amazingly better than any other of his later works, no matter the prizes and recognition. “Sex, Lies, and Videotape” is a masterpiece!

It’s a story of four people, two men and two women – Ann, and her husband John, a successful lawyer; Ann’s sister Cynthia; and John’s old friend Graham. Ann is a gorgeous woman, but she is sexually cold. John has long given up any effort to have any physical contact with her and has a passionate affair with Cynthia, who is totally different from her sister: she is a constant orgasm seeker. The life of this triangle goes on with Ann keeping house and Cynthia and John getting laid whenever they can, until Graham appears on the scene.

So it is not just four people. There are two couples: the ones who are sexually “healthy” and their relationships are based on intercourse – we don’t see them talking about things other than sex. And this sexually based relationship is based on a lie.

The other ones are sexually and socially crippled. He is impotent, she is cold. But they are true. They accept what they are as a state, not an inability. And they talk about it. While the first couple is having sex, the other is talking about intimate things. And this conversation oozes affection. On one side of the screen it is lust, on the other, love. A crippled, undefended love, but yet it is love. Ann and Graham have to surpass many obstacles to get close to each other. But when they finally do, their mating has a totally different quality from the totally different couple we have watched before.

Having sex as a result of loving, of confiding in somebody, of letting one’s ego melt into the other’s. That was “Sex, Lies, and Videotapes” – a small treaty about the relationship between sex and love!

Well, this is a purely metaphysical view on the subject of this list; that is, the relationship between love and sex. A peculiar story featured by a peculiar director, set in an austere religious community somewhere in the north of Scotland, where the open grey horizons of North Sea dominate the landscape.

Bess is the ‘fool’ of the community, a young sensitive girl with an open heart who doesn’t get along well with reality. Having been institutionalized in the past, when she falls for Jan, a Danish oil rig worker, she finds her place in the universe and gives herself to him body and soul. When Jan leaves for the rig, she is devastated and prays day and night for his return. And when Jan returns paralyzed due to an accident on the rig, she believes it is her fault.

Jan asks her to go on with her life and have sex with other men, and Bess interprets it as if it is her mission to have sex with as many men as possible, even to be maltreated, as a means to cure her beloved husband. Once set to action, trying to have sex in all the most unbelievable places under whatever condition, nobody can change her mind. And she finally achieves in curing her husband, sacrificing her own life.

Lars von Trier’s first film of the “Golden Heart” trilogy is a hymn to love in its very Christian sense, that binds it with self sacrifice. “Love… always protects, always trusts, always hopes, always perseveres … The greatest of these all is love,” recited Paul to the Corinthians. Love is the absolute emotion, the absolute value in von Trier’s moral universe in this particular film.

Bess, as a multiplied reincarnation of the holy spirit, is ready to sacrifice herself not for the evils of all the humanity, but for the life of the man she loves. Sex is not something inside or outside this relationship. It is a vehicle of showing love, either by offering pleasure to the beloved one or by offering the body to be used by the most undesired and dangerous people.

“Love is patient, love is kind.” Furthermore, love is divine, knows no moral boundaries set by people. The sound of bells enters triumphantly as Jan buries his wife in the ever silent cemetery. Love has won! 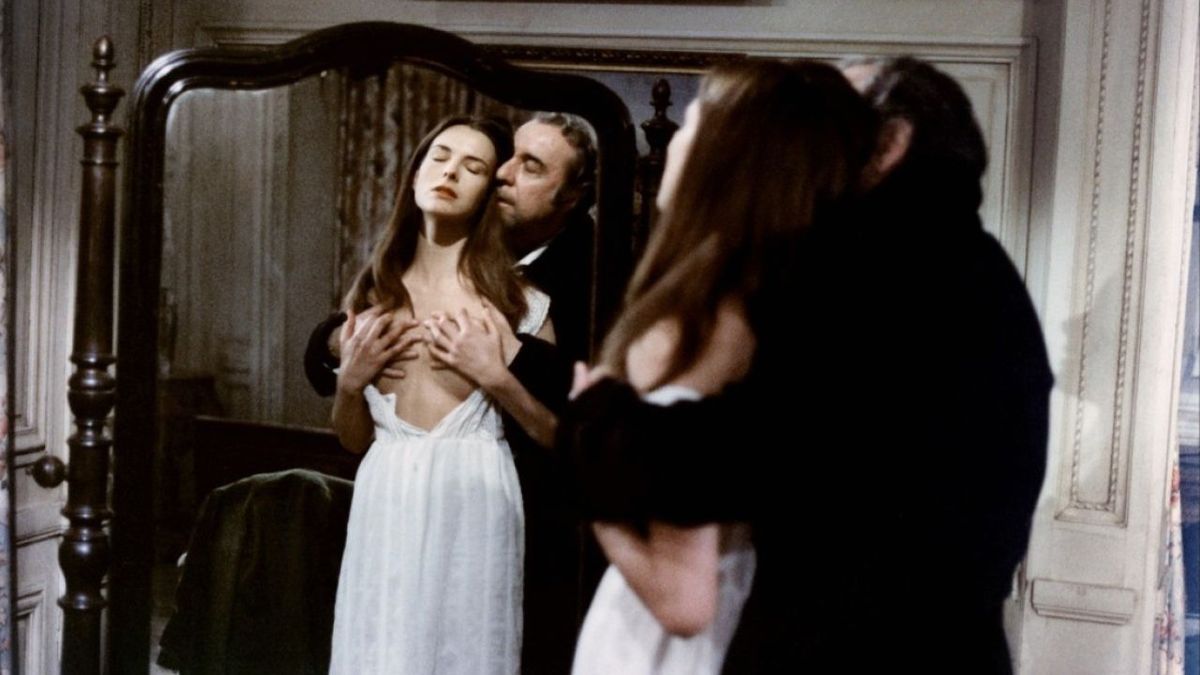 I saw the film three times until I realized the obvious: young Conchita was interpreted by two different actresses, one French and one Spanish. It is said that Buñuel liked both of them during casting and couldn’t decided which of them should play Conchita. That sounds very much like him. But there are also very blatant differences between their role: differences in their looks, their behavior, their importance for the script.

The two Conchitas represent the duality this list is about to discuss: love and sex; ethereal, divine love and lustful search of corporal intercourse; the intellect and the body. They both torture Mathieu, the tormented aging male who seeks eternal spring in the mind and the body of a much younger woman, who always remains a futile dream, just as is personal fulfillment through the other person.

A monumental, highly psychographic work that tracks down the relationship of a couple as they go from familial happiness to infidelity and a painful divorce, new mating, and after all that, they rediscover their love for each other in a film that could easily be called “Scenes from an Ex-Marriage.”

Marianne and Johan are a model couple – success in work, harmony in the family. Until Johan confesses that he has gone crazy about a woman and intends to leave Marianne. Bergman follows the (ex) couple for the next few years, as they get married to different people, meet, fight, make love, and finally find happiness and fulfillment as secret lovers who cheat on their husband and wife, respectively.

The subtle balances between deep love and sexual pleasure that needs renewing is dealt with by the great Swedish director in a masterly way. Through scenes with long dialogue, we follow the course of a relationship as it passes all the stages, resuming that what they asked from each other was a way to inflame their faded passion, since their deep love was given. 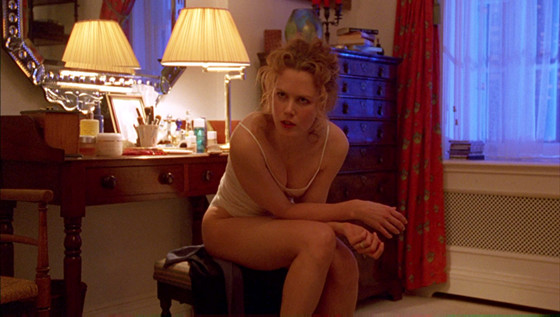 Every movie that Kubrick has released has been subject to consequent analysis, as he always used symbolism and every minor detail in his mise-en-scene meant much more than it seemed to. The same happened for his last and quite obscure work, the one he never saw released in theaters or analyzed as he passed away just after finishing the final cut.

The main topic of this film was love and sexual relations. The protagonists are a young, beautiful and successful couple; they are obviously bored with their sex life and try, through imagination or by forcing reality, to find ways to revive their lust.

Alice, on her end, escapes the monotony of her married life through dreams – an updated Alice in Wonderland? She dreams her own version of William’s adventures. William confesses everything to her and they are both terrified. What is left now? Return to the family harbor and have sex with each other, of course.

A critical view toward American ethics, family and monogamy. Sex is safe only into marriage. Outside there is perversion, puerility, AIDS, and psychical disturbances.

Acclaimed by many as the best movie of the 21st century, this is a romantic story of two people, a man and a woman, whose mates deceive them with one another.

Su-li Zhen is married to a traveling businessman. Chow Mo-wan is married to a woman who is often absent. We never see their faces. They don’t matter. What matters is that Su-li and Chow, out of despair for their unfaithful mates, engage themselves in an intimate relationship that could be but isn’t a love affair.

It is a film where love, or rather “the mood for love” reigns, while sex is not mentioned or even implied. Su-li and Chow are like the platonic lovers of medieval epics and early Romantic novels, while Wong creates a universe where shared feelings of affection prevail and lust just defines an intangible line between what people want and what they really do.

Sex is not the target – the dead end one may call – of a romantic relationship. Unspoken words and touches never meant to go further than reiterating the feeling of being accomplished without being fulfilled. A dispersed melancholy – together with the elegant parade of every kind of printed cloth in Hong Kong – leaves a bittersweet aftertaste of underlying desires. 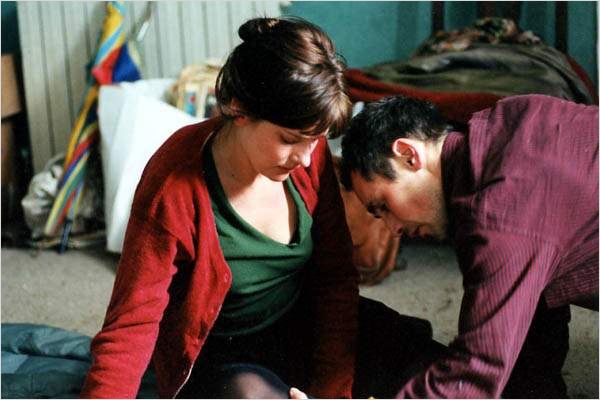 Can physical sexual contact be a simply corporal affair? Kureshi and Chéraux claim that it cannot. Two bodies that come into contact cannot just limit themselves to skin-to-skin touch. Something deeper emerges.

That is the case of Jay and Claire. They meet every Wednesday in Jay’s derelict house; they do not know each other’s name, they barely speak to each other, they have passionate sex, and then they separate with no goodbyes and meet back next Wednesday.

The film was criticized for its very vivid, unsimulated sex scenes – the first ones not to be cut by censorship in the UK. This served a purpose, and the purpose was surely not a pornographic one. By showing the sexual act in a non-mediated way, we get full perception of its intensity and the intimacy it implies, whether the lovers want to accept it or not. Throughout the movie we realize that both of them are deeply in love with each other, in a way they could have never imagined. Or pronounced.