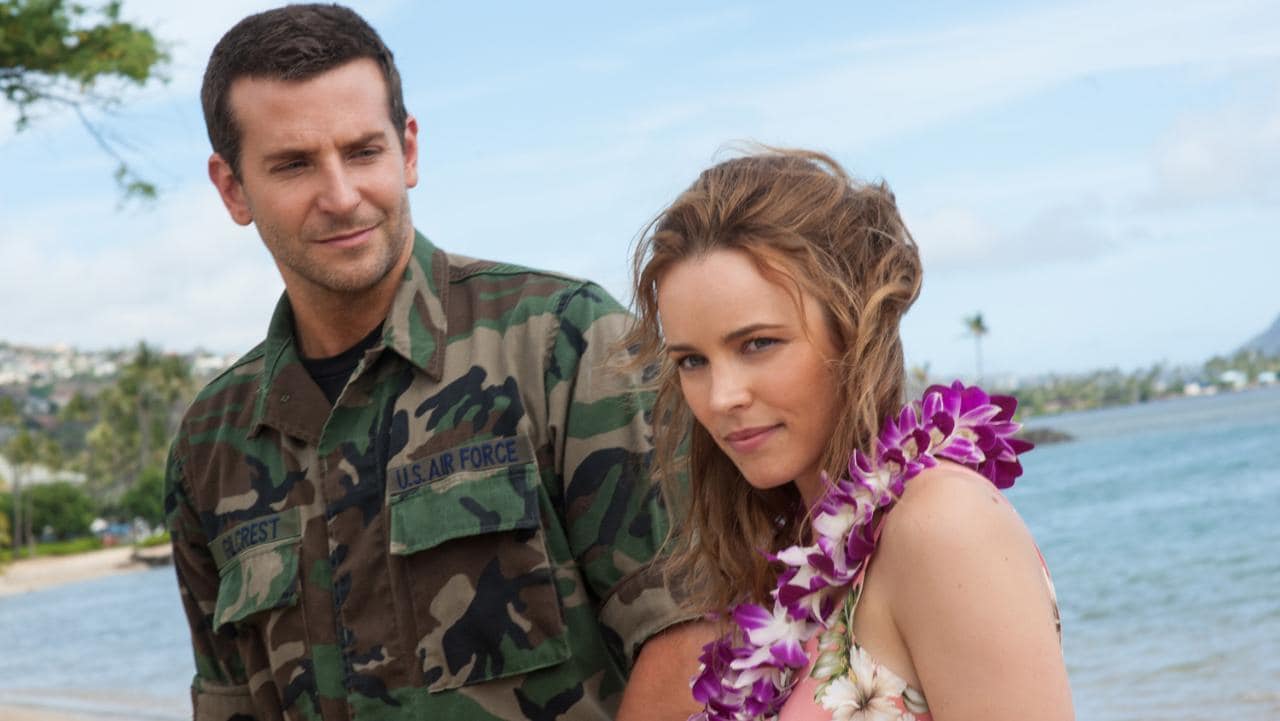 Cameron Crowe has made plenty of good movies, but Aloha is not one of them. It’s not even close to a good movie. It’s an incomprehensible mess that tries to squeeze every bit of quality out of its excellent cast. Sadly, no matter how hard these actors try, they can’t rise above a piss poor script.

There are two giant sins working against a movie that should, in theory, be halfway decent. First off, the plot is borderline incomprehensible considering the fact that this should be a straightforward romantic comedy. Subplots pile onto subplots until everything in the movie collapses. No romantic comedy needs to include a subplot about a satellite launching. This nonsensical addition to the story only detracts from the already thin character development.

Second, the characters don’t behave like human beings. It’s hard to relate to characters that seem so manufactured. They’re either eerily happy or overly sentimental. There’s no in-between here. It’s almost as if these people are aliens trying to behave like other humans who are actually capable of feeling complex emotions. Too bad everyone in the film fails to behave normally.

If Aloha sounds too good to be true, that’s because it is. Cameron Crowe helming a movie with Emma Stone, Bradley Cooper, Bill Murray, and Rachel McAdams sounds great in theory. The end result is the worst movie in Crowe’s career and an unfortunate stain on the actors’ resumes. In the end, the movie is a lifeless and overstuffed disaster. 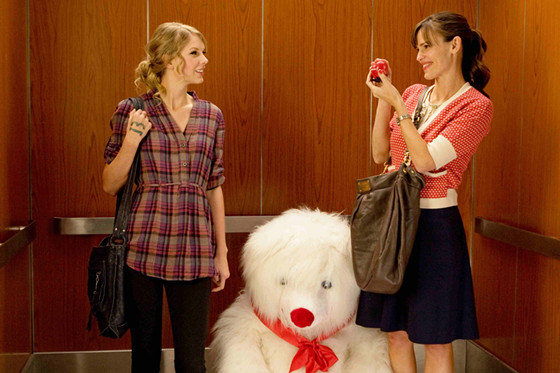 There are three of these awful holiday-themed ensemble movies, and it would be unfair to include every one of them on the list. While Mother’s Day and New Year’s Eve were spared from this list, be aware that they’re equally terrible movies. It was just decided that the granddaddy of bad holiday rom-coms should lead the pack. After all, this piece of junk started Garry Marshall long streak of disasters. At this rate, expect to see Arbor Day starring Meryl Streep by 2027. God help us all.

This is one of those movies that just has too many famous people to list off in one paragraph. So let’s just make it very clear that all of these people could do better. Even Ashton Kutcher and Jessica Alba deserve better than Valentine’s Day. Basically, it’s every tired rom-com cliché jammed into an overstuffed story with no sense of direction. Katherine Fugate’s story is so aimless that it’s obvious the cast and crew have no idea what to do with it. They all decide to go with the flow, but the flow doesn’t lead to a good movie.

It would even be generous to label Valentine’s Day a mediocre movie. Let’s be real, this movie stinks. The characters are uninteresting, the writing is bad, and the jokes never come. What does come is groan after groan while you wait for something good to happen. Newsflash: you’ll be waiting a long time.

The most recent iteration of Fantastic Four doesn’t have quite as large of a cast as other movies on this list, but there’s no denying the fact that there are some seriously impressive names here. Miles Teller, Michael B. Jordan, Kate Mara, Jamie Bell, Toby Kebbell, and Reg E. Cathey all had the unfortunate opportunity to star in Josh Trank’s disastrous superhero flick. How disastrous are we talking? With a 9% Rotten Tomatoes score, a 27 Metascore, and a C- Cinemascore (the lowest ever for a superhero movie), it’s safe to say that things were pretty bad.

What could have possibly gone wrong? Trank directed the well-received Chronicle, Simon Kinberg’s work on the X-Men franchise earned him plenty of fans, and the cast has a solid track record. Somehow, everything still managed to come crumbling down. Due to an overly dark tone, nonsensical pacing, and botched editing, Fantastic Four stands out as one of the worst superhero movies ever made. The cast tries their best, but they can’t do much to save what is so clearly an unsaveable movie. Say what you will about Batman & Robin, but at least it was oddly entertaining.

Fantastic Four isn’t entertaining. Rather, it’s just frustrating to watch because there are so many obvious missed opportunities. It’s incredible to sit through a movie that gets just about everything wrong. It’s equally incredible to sit through a movie that makes 2005’s Fantastic Four look like Spider-Man 2. The cast may be marginally better, but that’s the nicest thing that can be said about the worst superhero movie to come along this decade. 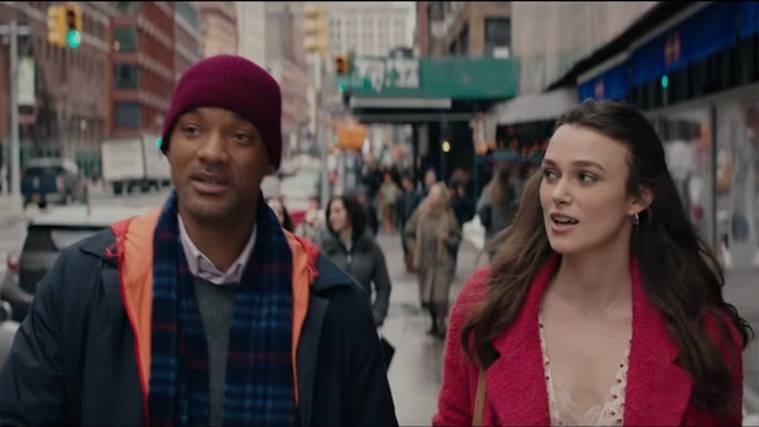 Collateral Beauty is a cinematic dumpster fire that deserves all the hate being thrown its way. It’s emotionally manipulative, it’s shallow, and it’s frustratingly quixotic. Despite having a nonsensical script that leads to problem after problem, they managed to get Will Smith, Edward Norton, Helen Mirren, Kate Winslet, Keira Knightley, Michael Pena, Naomie Harris, and Ann Dowd. Sure, the director has a good track record, but it’s hard to imagine these high profile actors and actresses reading through the script and thinking this would be a good way to advance their career.

The primary problem with Collateral Beauty is that the premise is completely unethical. It revolves around three white collar employees paying large sums of money to actors who will lie to Will Smith’s character in order to make him either less sad or so sad he goes insane. Viewers who look closely may be able to see that this is well intentioned in some ways, but the final product is borderline cringe-worthy. This is both because it’s morally reprehensible and frequently illogical. Seriously, shouldn’t these people be in jail?

None of the actors are bad in Collateral Beauty, but they’re stuck with a script that does them absolutely no favors. The aforementioned problems, along with nonsensical plot twists and unnatural dialogue, result in a movie that can only be described as misguided. It’s so misguided that it’s hard to believe anyone agreed to be involved.

This garbage can masquerading as a movie has so many A-list actors that it would be impractical to name them all in this paragraph. Just be aware that it has multiple Oscar winners and nominees, along with some of the hottest comedic actors around. This massive cast would be impressive if the movie were any good. Sadly, Movie 43’s only claim to fame is the fact that it’s considered one of the worst motion pictures of all time.

How could everyone involved stoop so low? The mystery is more entertaining than this god awful “movie.” They barely got paid, they knew the movie was horrendous, and they still decided to stand in front of a camera and make fart jokes. Movie 43 unsurprisingly went on to win three Razzies, including Worst Picture. The cast has since recovered, but this movie will always be a reminder of past mistakes.