Tragedy for the purposes of this list does not mean films that are very sad. Rather the films selected explore themes associated with Greek and sometime Shakespearian Tragedy. Throughout this list, philosophers and theorists of the tragic have been cited. This use of theory to discern what is properly tragic is controversial.

Raymond Williams for instance argued that the tragic was not an elite experience but rather one that evolved to incorporate modernity itself, including ordinary experiences of sadness and alienation. Terry Eagleton, a literary theorist, argues that perhaps the only workable definition of tragedy is very sad. However, why then not do a list of very sad films? Why use the term tragic at all?

For this list, the films evoke more philosophic conceptions simply to distinguish the tragic from the sad, which is not intended to be an absolute distinction. The list does not include tragic TV series such as The Wire—which was inspired by the idea of postmodern tragedy where bureaucracy functions as the inescapable and undefeatable necessity sanctioned by the Gods—and Breaking Bad—which seems to frame the transformation of the anti-hero into a tyrant. 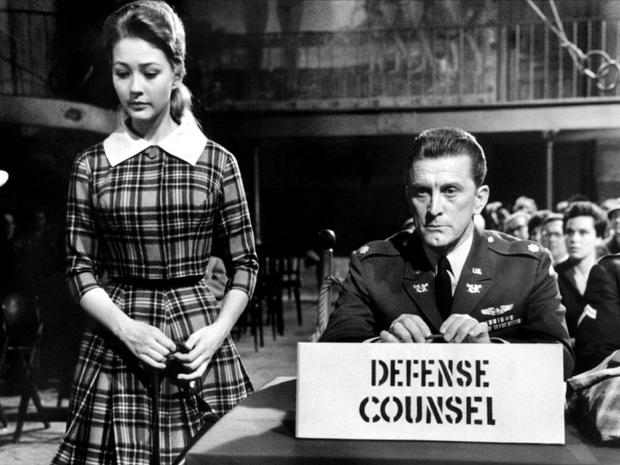 According to GWF Hegel there is nothing more tragic than a conflict between two rights, where characters come into conflict who both embody conceptions of what the right thing to do is. For Hegel, justice in tragedy comes at the price of injustice.

When a 16 year old woman, Karin Steinhof, is raped by American soldiers during the US occupation of Germany, a conflict arises for Steve Garrett played by Kirk Douglas. He must defend these men even though he knows they are guilty. Initially he tries to bargain that the men will admit their guilt and serve their time provided they are spared the death penalty. He does not wish to see them die. When that fails he tries to convince Karin’s father, Karl Steinhoff to drop the charges. Garrett discerns the greys but saves the men at the expense of Karin Steinhof, destroying her account on the witness stand.

The town horrifically condemns Karin Steinhof, insinuating that she invited the attention of the soldiers and while Garrett attempts to help her his loyalties are with the accused. The court at the end of the trial, with Karin Steinhof’s withdrawal from the process, can no longer execute the men. But the court, taking the place of the chorus dishonorably discharges the soldiers and sentences them to prison for their horrific crime. A journalist reporting the events initially despises Garrett but comes to recognize his dilemma.

Hegel framed the conflict of right largely through ancient tragedy, particularly Antigone where Antigone represents the family and Creon the law. With modern tragedy the divided self becomes paramount according to Hegel. As such characters in modern tragedy can no longer have clear convictions.

Rather their will drives them forward even when their beliefs undergo doubt. But the tragedy is of course more than Garrett’s tragedy. It is Karin Steinhof’s tragedy most of all. Caught in fate’s clutches, tragic notions of destiny are reconfigured along gendered lines. Unfortunately the film, while showing the very real consequences for Karin Steinhof who commits suicide, often switches focus to the tragedy of deciding between rights as well as the cruelty of the town.

9. The Killing of a Sacred Deer tie with A History of Violence

Both Yorgos Lanthimos’ The Killing of a Sacred Deer and David Cronenberg’s A History of Violence explore the notion of being punished for past crimes and the notion of familial guilt. In the former case, The Killing of a Sacred Deer is a sort of reinterpretation and reworking of Euripides Iphigenia in Aulis. When a surgeon kills a boy’s father on the operating table, the boy gives him the alternative of killing one of his family members: either son, daughter or wife, or otherwise watching them die from a mysterious illness brought about by his curse.

According to George Steiner, tragedy entails people being punished in excess of their guilt. We never know exactly how culpable the protagonist is. Steiner states that tragedy concerns dark and mysterious forces that torment humanity for sport. Such seems to be the implication of The Killing of a Sacred Deer as the crimes of the father affect the children and his wife. This notion of predestined suffering is a thematic common in Greek tragedy and although Shakespearian tragedy often suggests that fate may well be superstition, there is nevertheless lip-service to predestination and fate.

A History of Violence doesn’t quite go down the Steinerian path, but it does convey a sense of inescapable reckoning associated with Greek and Shakespearean tragedy. A History of Violence follows Tom Stall works in a dinner. When the diner is robbed, he kills both robbers, defending waitress’ life. Gaining media recognition, Tom who had previously been involved in gangs must defend his family from them. Indeed, he must even kills his mobster-brother to do so.

In Greek tragedy, one’s crimes as with Oedipus, inevitably catch-up with the protagonist who suffers until he or she, through a ritual act of transgressive suffering or violence, can be cleansed.

Although Aristotle’s catharsis has been hotly disputed with perhaps the most credible translation of the word being clarification rather than cleansing, purification or purgation, the possibly misinformed lexicology has generated a productive way of interpreting tragedy that is perhaps truer than the account proffered in the Poetics. Moreover, the conflict within the family and the notion of violent redemption is key to so many tragedies including the Oresteia.

According to Jean-Pierre Vernant and Pierre Vidal-Naquet in their masterful study, Myth and Tragedy in Ancient Greece, Greek tragedy problematizes the notion of the mythic hero. Greek tragedies wee reproduced in democratic Athens and as such they reflect, so the scholars argue, an ambivalence to the cult of the hero. Greek myth shows how rulers and heroes established and defended city-states and Greek Tragedy similarly honors them for their service. However, as the tragic hero is often a tyrant, the hero poses a threat to democracy.

Peter Greenaway turns ambivalence into denunciation, taking motives associated with tragic narratives such as revenge and cannibalism as well as cruel justice, to examine Thatcherite Britain. Greenaway himself has said that the film is a parable but more than just a parable of Thatcherism. The film concerns a mobster, the thief who murder’s his wife’s lover. In vengeance, the wife kills the thief but not before forcing him to eat a piece of her dead lover.

How, one may ask, is this a parable for capitalism without limits? Well, the thief is clearly an image of a businessman, indeed a criminal businessman, and mobsters have long been associated with corporate CEOs. He further acts cruelly to the poor and the unfortunate and represents the cruelty of the world and also the capitalist system. Borrowing from a Shakespearian framing of villainy, there is no ambiguity to the thief’s villainy, only a figure driven by appetite.

Kurosawa’s Throne of Blood is possibly the greatest cinematic adaptation of Shakespeare ever made while also reworking the story in a radically different way. The film opens with fog and dark mountains and mounds of barren earth, accompanied by the sound of people singing “Look upon the ruins of the castle of delusion. Haunted only now by the spirits of those who perished.

A scene of carnage.” Whereas Macbeth concerns time being out of joint, hurried and frenzied, there is a sense in Throne of Blood that the only thing constant is time itself, and that human beings and their desires are transient hauntings that disappear of their own hubris. Hegel in his description of tragedy claims that tragic personages perish and become ‘shadowy-picture thoughts’, almost forgotten. He argues that tragic heroes are wrong to trust divination, the utterances of Gods, the spirits and witches. Accordingly, divine knowledge lies: it is true but deceptively true—just as the Macbethian protagonist in Throne of Blood discovers.

There is a temptation to read Throne of Blood along the contours of the Shakespearian reformulation of the tragic flaw of the protagonist, namely ambition. But there is another, non-Aristotelian way of understanding Throne of Blood. According to Friedrich Nietzsche in a footnote in his work, The Case of Wagner, the tragic does not concern tragic action but is rather a type of ritual establishing a sense of place through a sacred story of suffering. Is this not the very opening of Throne of Blood?

The emphasis on place is very evident in Lars von Trier’s great exploration of sublime horror. Antichrist is about a couple, known only as He and She, who after the loss of their son retreat to a cabin in the woods, theologically named Eden.

There is a strong sense that they are returning to some sort of primal world inhabited by destructive spirits. He has taken her to the cabin to help her deal with her grief, and represents a masculinist rendition of reason. She allies herself with the destructiveness of nature and its cycles, warning that she and by extension nature are evil. When he ignores her warnings, she castrates him. He eventually believes she is a witch and burns her body.

At the end of the film, he wonders through the woods, eating berries and then witnesses faceless women walking either side of him. The ending could suggest that he is condemned but another interpretation is that by killing She, he has purged woman and by extension nature of the evil attributed to it.

From this reading, she becomes a tragic scape-goat, that like the tragic hero, accepts her destiny as a sort of purifying sacrifice. Still another reading would hold that He is purged of his tyrannical reason and now open to the scary, pagan properties of both women and nature. Certainly, according to Nietzsche’s The Birth of Tragedy, the hero must be humbled and negated before he can be rid of his painful individuality and return to the earth mother, via a Dionysian ritual.

630
SHARES
FacebookTwitterSubscribe
Subscribe via Email or RSS Feed
Pages: 1 2
Comments (18)
Most Tragic Movies of All Time