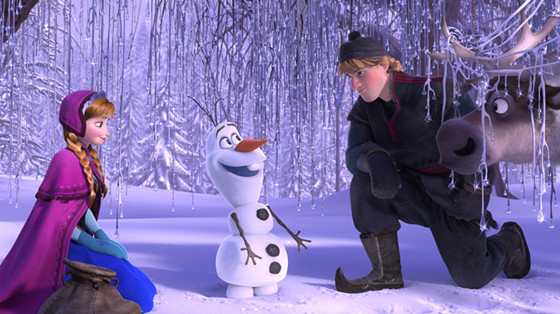 This movie is fine. Let’s get that out of the way. It’s a fine little Disney movie that fits well within the well-worn tradition Disney has dealt with in the past as well as the current tradition of subverting those traditions and pushing them forward.

But it feels like an incomplete movie. Like there was a really longer version of the movie that had the characters more fleshed out and interesting, but was cut down to a kiddie approved length. The songs are fine but also not as immediately earworm-y as past movies like “Aladdin” or “The Lion King” or even the recent masterpiece “Moana.” Doesn’t help that “Deadpool 2” really took the wind out of the sails of these songs as they are just repurposed “Yentl” songs.

Also it has Josh Gad as a mentally deficient snowman, which is just so unappealing on paper and the movie doesn’t make it any better in execution. The movie feels like it exists just to sell toys and merch. In the current Disney animation renaissance, it doesn’t feel as fresh or vital as the others.

Alejandro Inarritu kick-started his run of Oscar elitism with this movie, a rock-headed nonsense movie about acting and Hollywood and a tragic white man so of course the Academy ate it up. This one is a little better than “The Revenant,” mainly because Michael Keaton is always fun to watch, the cast is good, and there are some fun moments that they help to bring about in spite of the script and Inarritu’s hamfisted approach to everything.

The “one long shot” approach to the movie is just a technical feat that does nothing for the movie. It’s just showing off. It’s trying to be a movie about the push and pull of art vs. commerce and how embarrassing it is to make a movie that makes money when you just want to be a serious ARTISTE!

But then it ends on such a stupid note where maybe Keaton’s fantasies have happened, or maybe they didn’t, and now Emma Stone is smiling about it for some insane reason, which is either because she’s happy her butthole dad is dead or his insanity has not infected her.

It also feels way too phony of a text as Keaton has never seemed like one who is really not ashamed to be in the movies he’s in, especially when he would then be in a new Spider-Man movie three years later. It’s just a wannabe provocateur trying to prove how pure he is by bashing on commercial movies despite his complete lack of a profound thought on the subject. This supreme level of cynicism and pretentiousness is exhausting and insulting.

The emperor is naked. He keeps telling us how great his clothes are and how elevated his tastes are. But this freaking guy isn’t wearing clothes. How he has managed to trick people into thinking he’s anything but a loon with his junk hanging out is beyond me.

Maybe it’s that his movies are so portentous and so filled to the brim with self-importance that it incepts those who watch it into thinking they too are smart. The self-importance peaked with this movie, a movie so empty and uninteresting that the entire discussion surrounding it was about how hard it was to film and not how hard it was to watch it. They shot only at the magic hour and Leo ate an entire school of orphaned fish, and Tom Hardy had to grow an entirely new hand by sheer force of will after they cut it off for real, because art, man.

There was nothing else to talk about because the movie was so boring and so thematically uninteresting and muddy. Leo is left for dead, his half white/half Native son is killed by Hardy, and Leo slowly trudges through half-baked western iconography to fight him.

There’s then the barely thought about idea of vengeance being bad and how only the natives are naturally savage enough to seek revenge without soiling their souls, and Leo then sees a ghost and the movie ends. The only part of the movie that has any life to it is Hardy, who is just chewing the scenery and seeming like the only one who is having fun and not drowning in thirst for an Oscar.

Alejandro Inarritu has nothing to say but thinks he does, overdoing the pretentiousness. This is a hollow movie boosted up by truly astonishing visual work by Emmanuel Lubezki that actually does nothing to boost the actual meat of the movie. There’s no back and forth that helps the visuals inform the text. That’s because Inarritu doesn’t really understand how to tell a story with subtext. It’s all text and the text is boring and the subtext he thinks he has in them is actually dumb as hell.

Sci-fi has been doing pretty well for itself in the last few years. Some strong and talented voices have been trying their hand at the sci-fi well to turn in some truly interesting works. But in this new streak of greatness, something was bound to sneak in through the cracks. “Arrival” is that movie. It’s not great. It’s immaculately made, as Denis Villeneuve is just a master craftsman at this point. It’s biggest issue is in the intent of the script versus the execution of it.

The movie is built upon a big idea of transcending our minds to break free from a linear view of time and live life in a circular way. There’s the linguistics of it and the process of getting to know an intergalactic being and how politics worms its way into said process. But the movie then decides to hang the entire climax on an unearned emotional beat.

The movie tries to pull the rug out from under us by saying that the dead daughter from the beginning of the movie actually happens in the future, and the fact that we have been spending time with Amy Adams as she seems to be clearly in mourning is actually just a personality-free cypher meant to push us through the narrative.

It also doesn’t help that they try to then tie Jeremy Renner into this as he is the husband who helps conceive this child and then leaves because he can’t deal with knowing that Adams knows that the kid is gonna die, so why even go through with.

Yet the entire movie, Renner and Adams have no emotional chemistry or show any signs of life outside of the material at hand. There is no heat or emotion to this movie at all, so to try and build the entire thing around an emotional reaction is just bad.

Maybe someone other than Villeneuve can tackle that idea. He proved himself to be more at home in the bleak and cerebral sci-fi with “Blade Runner 2049.” Emotions might elude him. It hurts this movie and just really boggles the mind at how anyone can really get invested in the emotions of it.

2017 was a hell of a year for cinema. So many great movies came out and made their case for supremacy that the final tally of Best Picture nominees at the Oscars really didn’t feel too out of place. They all were justified. Well, except for this one. Not by much, but when so many worthy movies were left out for another coming-of-age story about a jerk white girl, it just feels off.

Greta Gerwig imbues the story with very clear-cut personal elements to the movie that makes it feel more like a journal entry than a piece of fiction. That personal element helps the movie in some ways, as it gives it something unique. There’s a soul to it. But in many other ways, it hinders the story as it doesn’t truly engage and interrogate its characters. Not every movie needs to judge it characters. But this one feels like that is what it’s trying to do. It falls short of that.

Lady Bird herself is a formless and shape-shifting troublemaker, constantly burning things down around her just to make things interesting, but is never really tested on that despite an ending that indicates that she’s turned a corner. Laurie Metcalf plays a monster of a mother, an emotionally abusive witch who cuts her daughter down at every turn because she’s not the mindless automaton that she wants her to be.

Yet we’re supposed to feel bad when she misses saying goodbye to Lady Bird on her flight to college, despite that it was her own damn stubbornness that caused that. Honestly though, what makes this movie feel like it’s lacking is that there is no one element that sticks with you. No classic scenes or ideas that stands out. It’s a movie that exists and is fine in the moment but that dissipates as time goes on. Mainly because it’s like its title character. It has no personality outside of what other thing it’s trying to be.