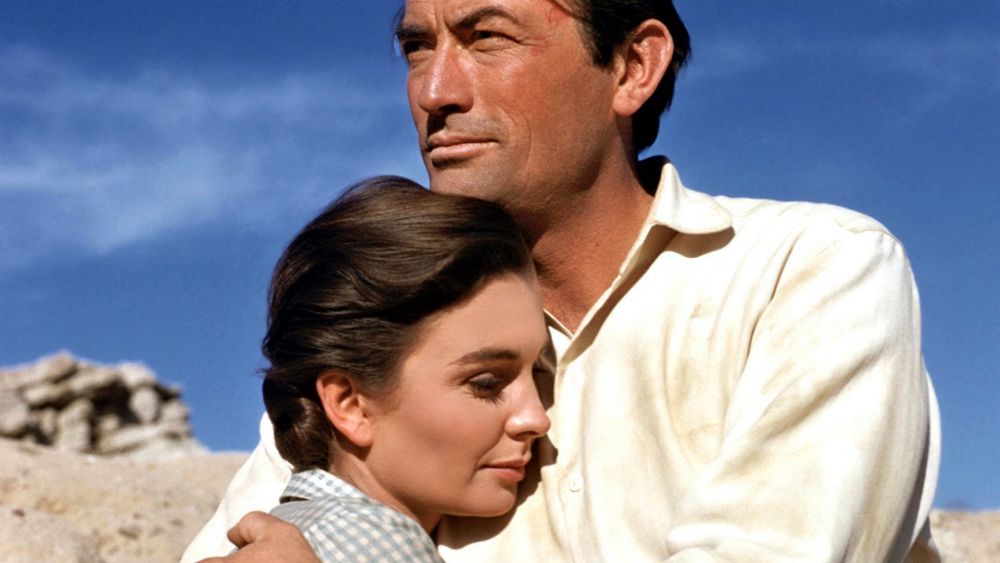 Before William Wyler made the sprawling epic Ben-Hur, he’d already proved he could handle a complex story with massive scope when he made The Big Country. This film’s cast is among the most impressive ever assembled, featuring Gregory Peck, Charlton Heston, Burl Ives, Carroll Baker, and Jean Simmons, among others.

Its intertwined and overlapping storylines are handled with mastery by the great Wyler in a way that proves he is one of the great storytellers of cinema. Each intersecting plot is visited often enough to keep the viewer engaged, but sporadically enough that each setting feels like its own independent universe. When these separate worlds collide, the effect is powerful.

Gregory Peck gives an unforgettable performance as a cultured sea captain who journeys to the American West to join his fiancée. Little does he know he’s walking into a hornet’s nest of a feud between the family of his fiancée and a neighboring clan.

As the captain tries to apply his natural gentleness and humility to a society where only the strongest and most aggressive survive, his principles are tested and his fiancée’s devotion is strained. The hypocritical passions that often underlie that most respectable elements of society are exposed in The Big Country, and the nature of true character is explored. It’s a rare example of a thoughtful, epic Western movie.

7. Under The Sun of Satan 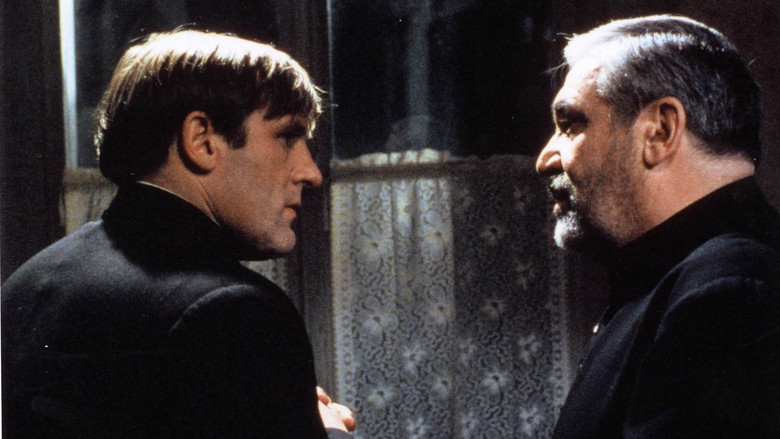 Under the Sun of Satan is an adaption of a novel by Georges Bernanos, who frequently explored in his writings the depths of faith and the heights of doubt. Bernanos never shied away from the dark shadows of despair that often lurk behind the brilliant light of conviction, but he always sought to find how the two could honestly be married.

This film, directed by Maurice Pialat, provides an unblinking examination of the spiritual life of a conflicted clergyman. Gérard Depardieu plays Donissan, a faithful priest tormented by his fears of damnation and of being inadvertently used by Satan while intending to serve God.

The tension explored in this film focuses on the nature of the world itself. The priest wants to believe that God rules and controls the earth, but the abundance of evil all around him leads him to fear that Satan in fact holds sway.

After a chance meeting with a horse trader who Donissan is horrified to learn may be Satan himself, the priest worries that his newly discovered sense of spiritual power and insight may be the work of the devil, and not of God. His attempts to rescue the soul of a young woman who has killed her lover become hopelessly complex, and Donissan begins to suspect his own motives for every good work he tries to do.

Under The Sun of Satan is a relentlessly probing examination of the human soul, and of its amplified reflection – the world around it. A brilliant central performance by Depardieu makes this engrossing film easy to recommend. 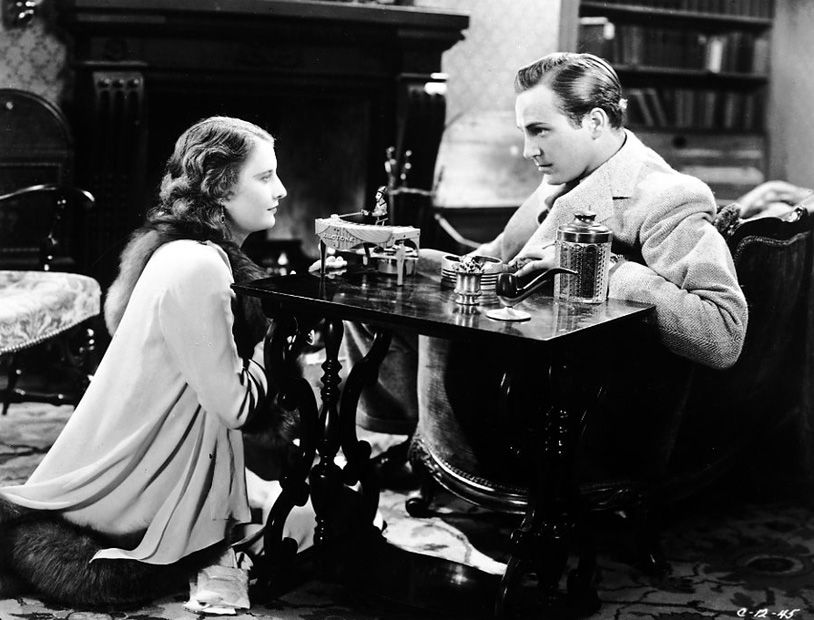 In this film, Capra is at his realistic best in his depiction of society and human nature, and a serious subject matter is treated with both sobriety and the light touches so frequently found in his films. Stanwyck has never been better than here in her role as a phony evangelist whose staged miracle-working has given her a massive following and a bank account to match.

Frank Capra makes no effort to conceal his reasons for making this film, which clearly serves as an exposé of false religious figures; the opening frame reads: “‘The Miracle Woman’ is offered as a rebuke to anyone who, under the cloak of Religion, seeks to sell for gold, God’s choicest gift to Humanity… Faith.” And he executes his mission perfectly. Stanwyck plays the disillusioned daughter of a minister whose thankless congregation drove him to an early grave.

After her father’s death, she uses her natural charisma and biblical knowledge to start a church featuring entertaining performances and phony healings. But when a blind young veteran starts to believe in her powers and become enchanted by her personality, she is forced to face herself and her lies.

The plot of Sansho the Bailiff is one worth of Shakespeare himself. It’s a complex tale that never loses its way amid its own complexities, and always feels directly and immediately engaging.

This film was made by the great director Kenji Mizoguchi in 1954, during a time when his work was finally being recognized and revered by the general public. Its story is told with Mizoguchi’s trademark simplicity of style which always served its story by respecting the ability of the story’s substance to speak for itself.

Sansho the Bailiff is in fact the name of the villain in this film, and he is a vicious slaveholder. When two children are snatched from their parents to work for Sansho, their lives seem ruined forever. But when the brother and sister begin to suspect that their loving parents may still be alive, they’ll stop at nothing to rejoin their family and end the wicked slavery practices of Sansho the Bailiff.

In this film, Mizoguchi takes an unflinching look at the evil of humanity, but also gives glimpses of its goodness. The effect is a tale which indicates that though evil may always maintain some degree of power, morality and goodness must still be pursued. It’s a brilliant, heartbreaking film that ranks among Mizoguchi’s very best. 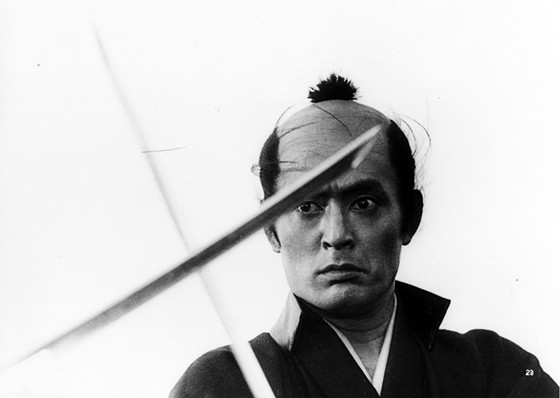 On paper, Samurai Rebellion has an awful lot going for it, and on screen it doesn’t disappoint one bit. Featuring the rare storytelling talent and directorial prowess of Masaki Kobayashi, Samurai Rebellion takes a compelling story and turns it into a cinematic masterpiece. With world class acting performances by Toshiro Mifune, Yoko Tsukasa, and Tatsuya Nakadai, this is a film featuring the best vehicles available to flawlessly transmit its ambitious vision.

Ever willing to play the iconoclast when needed to support justice and integrity, Kobayashi once again takes on the hypocrisy of societal codes which tend to become more important than human dignity over time.

Toshiro Mifune plays an aging samurai who must weigh his family’s welfare and his own sense of duty against the wishes of the lord of his clan. When the clan’s lord casts off his mistress after she bears a son, the lord forces the samurai’s son to marry the woman. However, after two years of happy marriage, the ruler decides to recall his mistress to his household, and orders the family to sever all ties from her.

What the lord doesn’t yet realize is that by doing so he will be provoking the wrath of Toshiro Mifune, which is always a foolish move. Mifune gives a ferocious performance as a samurai who wishes to live peacefully but is forced by ancient customs to make decisions he would rather avoid. Samurai Rebellion is a riveting experience.