Akira Kurosawa’s answer to western films is “Yojimbo,” the story of a lone ronin named Kuwabatake Sanjuro (played by Kurosawa regular Toshiro Mifune). A town has to be protected, and Sanjuro is hired to be the bodyguard for many.

This is a trope that has been seen many times since (the most obvious example being Clint Eastwood’s Man with No Name, which is directly based on the Yojimbo character). However, with Sanjuro, this definitive archetype may be one of the strongest cases of a strong, silent type who speaks through actions.

When Sanjuro wards off attackers for the first time, it feels almost like watching a magic trick. It is majestically powerful stuff. We got what we came for, and it is breathtaking. From that point on, while you do not want danger to happen to him, you want to see him work his craft again and again. Some of the best kinds of characters feel borderline mythological, and the story in “Yojimbo” feels like one that was told as folklore over time. 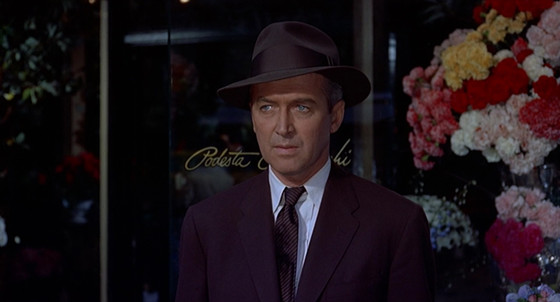 You knew a James Stewart character had to be here somewhere, whether it be his lighter or his darker material. We’re going down the darker path here, as his dizzying character John Ferguson proves to be a solid anchor in Alfred Hitchcock’s “Vertigo.”

Half of the film is recovery mode for Scottie, a detective who stops working after the death of a fellow cop. He has fainting spells dues to his fear of heights, and he is shaken to the core. Afterwards he gets back his mental strength, which helps for when he himself has to solve one more case. The recent events in his life do not add up.

The second half of the film is him experiencing delusion from a trap he fell for gone awry. He catches on, and starts to figure out the scheme that was placed against him. Suddenly, his life is becoming all too familiar again, with the setup of a swirling disaster destined to happen. In “Vertigo,” being smart is possibly a detriment, and Scottie proves it.

Jack Nicholson is a performer who can pull you in no matter what he is taking on (he could be a talking couch, for crying out loud). That’s why his take on the already-compelling J.J. Gittes in the neo-noir classic “Chinatown” is perfect.

We are already interested in the case Gittes is undertaking, but Gittes himself is as multifaceted as the criminal underworld of Los Angeles. He is miserable, because the remaining heart he had left is on his sleeve for him to use for others. He cannot shake off his past to the point that it becomes his every fiber of his current being. His lingo is slick, and his sleuthing methods are even slicker. He wallows as a defeated man who is only great at his job, yet underneath his self-surrender is someone suave waiting to get out.

How can one have confidence when their everything has been destroyed, though? Gittes is the ideal neo-noir character, because he is the evolution of the film style personified. He is beaten up by cases of misery, but he is damn efficient at what he does (enough to take it to the next level of devastation).

2. Daniel Plainview – There Will Be Blood

The greatest male character in the 21st century is a greedy, self-centered demon incarnate that is just impossible to despise. Daniel Day-Lewis’s finest performance (and that is saying a lot) is the devilish antihero Daniel Plainview, who almost represents the antithesis of a lone ranger in an anti-western.

He is not a lone ranger staggering into a quaint town: he is the force of a town that infiltrates a humble area. He abandons his son out of not knowing a better way of treating his disability, yet he completely separates himself from being his boy’s father when he has his riches. He otherwise willingly takes advantage of everyone in his way, even before he strikes gold. He is the kind of person we would hate in real life, yet cannot help but adore on film.

Maybe it’s his otherworldly stature that is carried on his hunched shoulders. He is fascinating no matter what he is doing. Let’s not forget that one of the most quoted lines in recent memory (“I drink your milkshake!”) is a confession that he will steal the wealth of anyone that stands in his way.

Before Bart Simpson, the mischievous boy that captured the hearts of many was the unpredictable Antoine in François Truffaut’s masterpiece about adolescence, “The 400 Blows.” The poor kid gets in trouble even when the predicament is not his own fault. When it is his own doing, however, the prank, lie or problem in question is 10 times worse.

If you ever got into serious trouble with your parents (who hasn’t?), it can’t be worse than pretending your parent was dead to get out of trouble. You feel sorry for him, though, because he is a child with adult ambitions. He wishes for freedom and the sea. He is the trapped everyday worker in the body of an immature child, yet many of his sentiments echo our own.

You can’t condone the bad that he does (although it is hilarious), but you feel almost painfully sad for him when he gets his comeuppance. Antoine is a mature revisit to our youth, and an understanding of the world as we know it now.