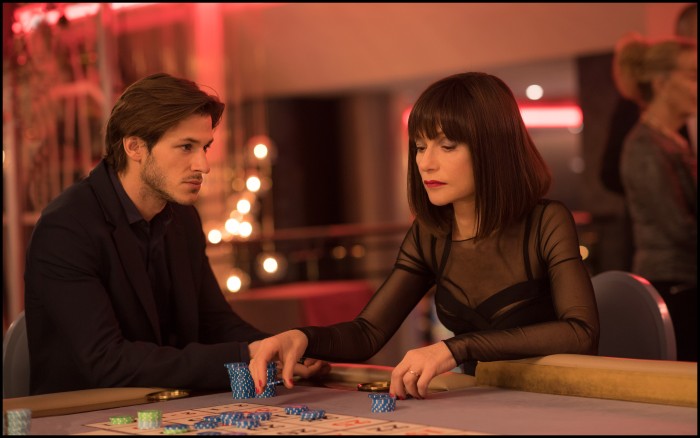 It starts with a male escort named Betrand (Gaspard Ulliel) giving one of his ailing clients a bath. This client is an acclaimed writer reaching the end of his career — with only one last play left ready to publish. When the writer suddenly dies, however, Bertrand sees his chance, heading straight out of there while taking the manuscript with him.

Next thing we know, his latest play Passwords is a huge success, much to the joy of his girlfriend Caroline (Julia Roy) and the rest of the general public. The apparently guilt-free ‘playwright’ is then tasked with writing his next piece. Stuck for ideas, he heads to the Alps, near the gorgeous Lake Annecy, and meets a mysterious escort named Eva (Isabelle Huppert). Using her as inspiration, he soon starts visiting her regularly, weaving a web of deceit that slowly tightens in around him.

Zigzagging constantly between Paris, Annecy and the Alps, Eva takes too many liberties with its own premise and the novel it is based on to be taken seriously. It begins with all the hallmarks of a thriller, but a Claude Chabrol-style masterpiece this is not. While promising so much at the start, the narrative isn’t propelled by any one pressing theme or idea to make it work.

Instead, there is the sense that it is just one thing happening after another, making the whole enterprise feel rather insubstantial. As the movie does not know what it wants to say, it doesn’t present itself in any significant way.

There is a lot of potential for dramatic irony here, with the lies our protagonist tells and the similarities between him and Eva creating a mirror between what we hear and what we know. But for a so-called thriller, it is rather inert. Perhaps it should’ve gone the other way, using its central conceit to be more of a low-key character study.

Instead it goes for a weird middle ground between the two, thus making its large climactic moments come across as rather underwhelming. Perhaps this was the intention of the movie — to split the narrative in two and subvert our expectations — but ultimately it just feels unstructured. With so many loose threads left dangling throughout — including a romantic subplot between the protagonist’s benefactor and his girlfriend — the film finds it hard to sustain any interest. It comes across as poorly thought-through, when with this initial premise and cast, it could’ve been a masterpiece.

Isabelle Huppert has been on one of the best runs in her career in recent years, owning the screen in films such as Elle, L’Avenir and Happy End. There is a sense that Eva is trying to coast on her charm, but there is only so much she can do to elevate the material. The idea of her playing a no-nonsense sex worker is a fun one, a deconstructed update of the classic Maîtresse that felt like it could go anywhere.

Any time she is acting she is fascinating to watch, a true original in the way she inhabits the screen and makes the characters her own. But she cannot sustain the film alone, the surrounding material veering closer to bathos than catharsis.

This isn’t aided by the direction, which although fancily lit and shot, doesn’t do enough to really turn the screws. The choices from scene to scene do not flow in an enjoyable way, making the story stutter when it should be bombing ahead.

Eva is a very French film, both in fact, replete with scandalous affairs, wine-filled conversions and trips on the TGV, and in sensibility, unafraid to provoke a certain sense of outrage. Yet, if the aim of the film was to make a grand comment on themes such as fiction-making, duplicity and desire, the viewer will be left with very little to ponder. It is almost as if Betrand adapted it himself.