Ben Wheatley – one of the most interesting contemporary directors working – said in an interview that cinema must be weird, to irritate the viewer and disturb him. Of course, we cannot agree with the concept proposed by the British artist, but we must admit that these kinds of films have a huge fan following.

Okay, but what does “these kind of films” mean? How do we explain the terms “bizarre” or “weird”? Are Troma’s films bizarre? And the movies of Quentin Dupieux? Or Taika Waititi’s movies? Certainly they are, but on different levels. The sense of weirdness is something that is subjective. In the context of the film, it is born when the creator crosses various borders: genre, good taste, social conventions and other different ones, sometimes all simultaneously. Sometimes the authors use a surreal, oneiric or poetic convention, or on the contrary, camp, as they play with clichés.

It is not so difficult to make a really strange movie when you use some imagination, but it is extremely difficult to keep a high artistic level. It’s hard to make a bizarre movie, not just a curiosity and an artistic shell. I propose a review of the top 10 bizarre movies of 2017, which develop “weirdness” on various levels and are simply good films that should please every cinema fan. 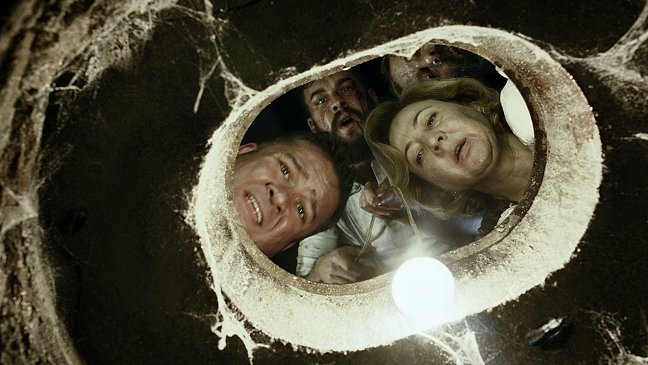 A few passers-by are sitting in a local pub, drinking coffee and eating something as part of a quick breakfast. At some point, to the horror of all the customers, one of them is shot when he leaves the bar. When another man moves to rescue him, he also dies from a missile from a closer undisclosed weapon.

Suddenly, those gathered in the pub learn that the streets and square next to it were completely and unexpectedly deserted, and perhaps a sniper is hiding on the roof of one of the buildings. Guided by the instinct of survival, they begin to not only devise a plan on how to get out of the trap set for them, but also try to find out the causes of gruesome events. By accusing each other of accusations and bumping into ever new theories, the bar customers do not realize that they have found themselves at the center of a large-scale conflict.

Spanish director Alex de la Iglesia is a master of bizarre cinema, and in his latest film he presents a good form. The creator of the iconic “The Last Circus” during his career developed an original, unmissable style. In “El bar” he reaches for proven tricks – an absurd story, black humor, lively action. The film ensures good fun, first and foremost, and if the viewer sets himself up for entertaining cinema, he will certainly not be disappointed.

Dave, a young frustrated artist / loser, builds a cardboard fortress in his apartment. His surprised girlfriend, after returning home, learns that the inside is much bigger than it seems and Dave got lost in the middle three days ago. A team of friends embarks with a rescue plan into a mysterious, lively cardboard maze that lives on its own. Their journey, full of dangers and great special effects, is a surreal combination of horror films about deadly trap spaces and American hipster comedy.

Bill Watterson made an extraordinary film about the power of imagination, using just the power of imagination. “Dave Made a Maze” is a production with a small budget, the main force of which is the script from which absurd humor and great love for cinema pierces. The film is a pastiche of such titles as “The Cube,” “Saw” and the Indiana Jones series. In addition to providing great fun, it keeps you in tension more effectively than many modern horror films. Recommended especially for fans of stoner films.

For 10 peaceful years located in the mountains of South Korea, the house of Mija (Seo-hyeon Ahn) is a refuge for a large pig named Okja, which becomes the girl’s greatest friend. The idyll suddenly ends when animal must be returned to the rightful owner, which is the international company of Mirando Corporation.

The consortium exports the animal to New York, where corporate president Lucy Mirando (Tilda Swinton) wants to show her at a cynical party called “the most beautiful pigs in the world” and thus start the mass slaughter of similar creatures to sell meat. The girl goes to the rescue of her beloved pig, and everything is mixed up with an alter-globalist organization using radical methods.

Last year’s Netflix movie, shortly after its broadcast, was described as the best and the weirdest of the films released by this platform. Joon-ho Bong, using his unusual narrative skills, sense of space and artistic freedom, creates a satirical tale that should be seen by every child wondering where bacon comes from. The director is not afraid to reach for the grotesque and the caricature. The characters played by Jake Gyllenhaal and Paul Dano are stretched in their stereotypes to the point of exaggeration; they can arouse ambivalent feelings for viewers.

This is a deliberate treatment in “Okja,” which we can also treat as a great movie adventure or family cinema, as it does not make the viewer feel confident with the image being viewed. There is a method in this farce, and sensitive viewers should at least induce different thoughts. “Okja” is also a beautiful film about the strongest childhood love. To sum it up, everyone will find something for themselves.

She (Jennifer Lawrence) lives in a remote home. She is in love with Him (Javier Bardem), an inspired poet experiencing a creative crisis. She herself renews the common socket, cooks, cleans up, and tries to get down to her beloved from the road whenever possible. There is no passion between them – she disappeared with the man’s wife.

Meanwhile, on a cloudy evening, the Stranger (Ed Harris) enters their home, seeking accommodation. The stranger’s visit introduces confusion and anxiety to the orderly life of the couple, arousing emotions for which no one suspects from each other, and leading to situations that everyone would like to immediately forget.

The work of Darren Aronofsky has many fans and equally many critics. His latest work, “Mother!”, probably only strengthens this division. It is certainly a bizarre movie, known as horror by distributors and Aronofsky himself, but it has more to do with the theater grotesque. The picture is surreal at times, sometimes with cheap symbolism, as everything is distorted in it to the absurd.

Whether we consider this film successful depends on the areas in which we will consider it. If we approach “Mother!” too seriously, we can quickly become discouraged. If, however, we treat it as a crazy variation on the works of Polański and von Trier, as a really simple story about the artist-demiurge-asshole sucking inspiration from people who love him, flavored with caricature and scenography, then we can be satisfied after the seance.

This is the story of a young black man, Chris Washington (Daniel Kaluuya), who goes on a visit to the estate of his white girlfriend’s parents (Allison Williams). He quickly realizes that the atmosphere of the house is, to put it mildly, strange. He does not expect, however, that the reason for the invitation is not only the desire to get to know him by Rose’s parents. Chris believes that the nervous atmosphere at the Armitage home is due to racial reasons. Soon, however, he will discover an amazing truth. The truth that he could not expect.

“Get Out” is one of the most interesting films of last year. It works great both as a horror movie and as a comedy. It may seem that the weirdness of the film is ensured by the mere combination of horror and comedy, but the surprise and discomfort of seeing will not be caused by the presence of grotesque monsters, absurd scenario solutions and comical jump scares. Rather, it is a creepy atmosphere and a sense of constant uncertainty that makes the film keep the viewer in constant tension.

Jordan Peele, in accordance with the new horror movie trends, tried to provide us with ambitious entertainment, which is why he raises the issue of social problems. These are issues with which – it would seem – cinema and Western society are slowly coming to an end. Nothing could be more wrong, because in the director’s epoch of transhumanism, there is a new form of racism.