The following list will briefly touch upon the affective, transformative and spellbinding elements that make A Quiet Place not just a richly rewarding horror film, but also one of the most exciting and satisfying sci-fi films of the decade. 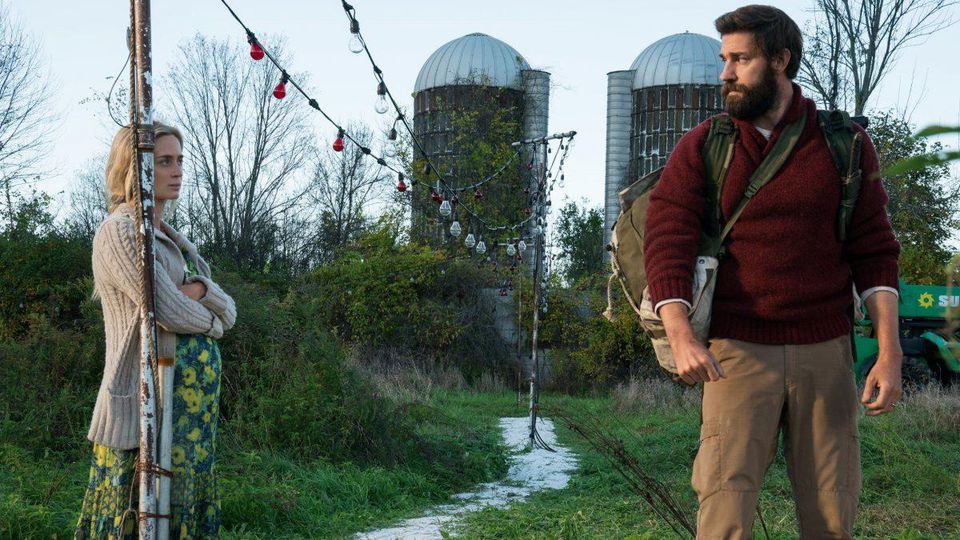 While being economically sparing with the details, A Quiet Place is immediately open about its premise. In a not-too-distant future a race of mean, massive, unmanageable, multi-appendaged spider-like monsters have appeared –– from where exactly, we do not entirely know, though headlines speculate deep outer space or perhaps deep within the earth, like killer cicadas.

These horrific creatures are blind, so they can be outsmarted that way, however their hearing is so perceptively honed that even the tiniest noise, such as the tinkling of a faucet or the mild commotion caused by a children’s toy can summon them, with ruthlessly fatal and terrifying results.

In this bleak tomorrow, the scant survivors have to adapt to a world of deliberate silences. Such are the Abbott family, Lee (Krasinski) and Evelyn (Blunt), who along with their three young children — sons Marcus (Noah Jupe) and Beau (Cade Woodward), and deaf daughter Regan (Millicent Simmonds) — have turned their remote farmhouse and environs into an efficacious survivalist ranch, and make the occasional reconnaissance into the ruins of a nearby town for extra supplies.

The Abbott family endure a startling loss that leaves them reeling, and after a while Evelyn, now very pregnant, and her rueful family begin careful and elaborate preparations for the challenges that will come with raising an infant in this viciously sound-sensitive setting.

On the surface, much of this preamble traces a fairly predictable horror movie trajectory, and a great deal of overly familiar tropes rear their all-too-familiar heads. As our likeable and extremely vulnerable protagonists repeatedly enact the stock fright flick scene of hiding from the baddies and trying not to make a peep, this boilerplate scenario is well-played out again and again. The audience get nearly as nervous and taut as the overly stressed out characters.

8. Despite very little dialogue, the film has an airtight script

It’s satisfying whenever a breakout horror or sci-fi picture that could easily fall back on predictable contrivance, instead offers a wide range of satisfying and startling plot developments along with the expected action.

It’s also a boon that the script allows for no shortage of action, and it’s never less than absorbing. From a terrible upset in the film’s opening act (no spoilers here, suffice it to say that when a horror film opens with such savagery, it makes one feel utterly unsafe for the remainder), to the potential terrors of a forgotten nail on the stairs, ready to seal someone’s fate, to the determined go-for-broke bravery of our desperate heroes in a final stand, this is a film crafted by people who appreciate quality maneuvers intervening with breathless action and a centerpiece involving childbirth that is a dynamo for potential devastation. 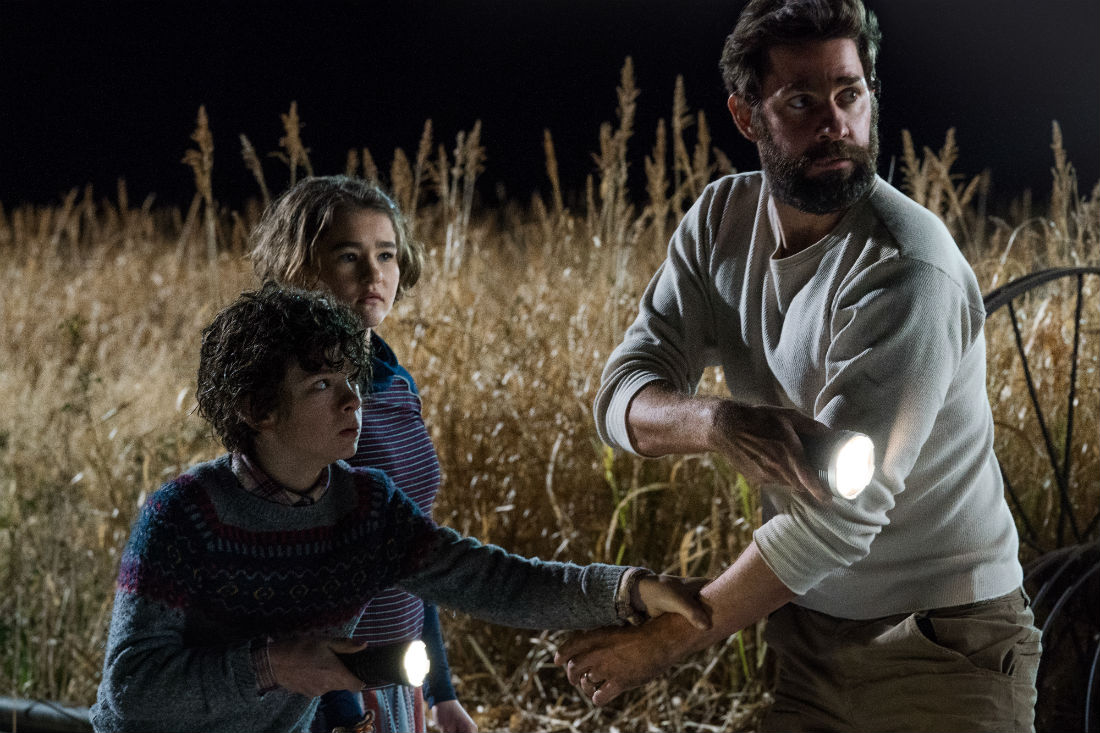 When making a genre film, in this case a post-apocalyptic horror film, there are often a number of trope-addled placeholder characters that can stifle the story and detract from the scary fun that’s unfolding onscreen. Luckily A Quiet Place sidesteps most of this commonplace quagmire by populating the film with talented and tenable actors.

The matriarch of the family, Evelyn, is played to perfection by Emily Blunt, whose impressive CV includes memorable roles in films such as The Devil Wears Prada (2006), The Young Victoria (2009), Edge of Tomorrow (2014), and Sicario (2015). As Evelyn, Blunt is wholly convincing as a patient doctor, grieving mother, determined parent, and resourceful sophist.

Eve’s husband, Lee Abbott, is played by the film’s director John Krasinski. Krasinski is in many ways cast somewhat against type as he’s largely thought of as simply “that nice guy on The Office”, thus making his turn as a survivalist capable of using deadly force, something of a shocker. Lee is also a crafty engineer, loving husband, grieving father, and supportive parent. His earnestness and dire straits make him easy to root for.

Millicent Simmonds, who was fantastic in Todd Haynes’s Wonderstruck (2017) is perfectly cast as angsty young Regan, Lee and Evelyn’s sensitive deaf daughter. Krasinski smartly sought a deaf actress specifically for this role, telling IGN in a recent interview that “I didn’t want a non-deaf actress pretending to be deaf […] a deaf actress would help my knowledge and my understanding of the situations tenfold. I wanted someone who lives it and who could teach me about it on set.”

And rounding out the main cast is 13-year-old Noah Jupe (The Night Manager [2016], Suburbicon [2017]) as Marcus, Evelyn and Lee’s oldest son. From what’s evidenced onscreen, Krasinski is able to pull very convincing performances from his young actors, and this helps immeasurably to convince the audience that this nerve-shredding occurrence is more believable than it ought to be.

6. The creatures are scary 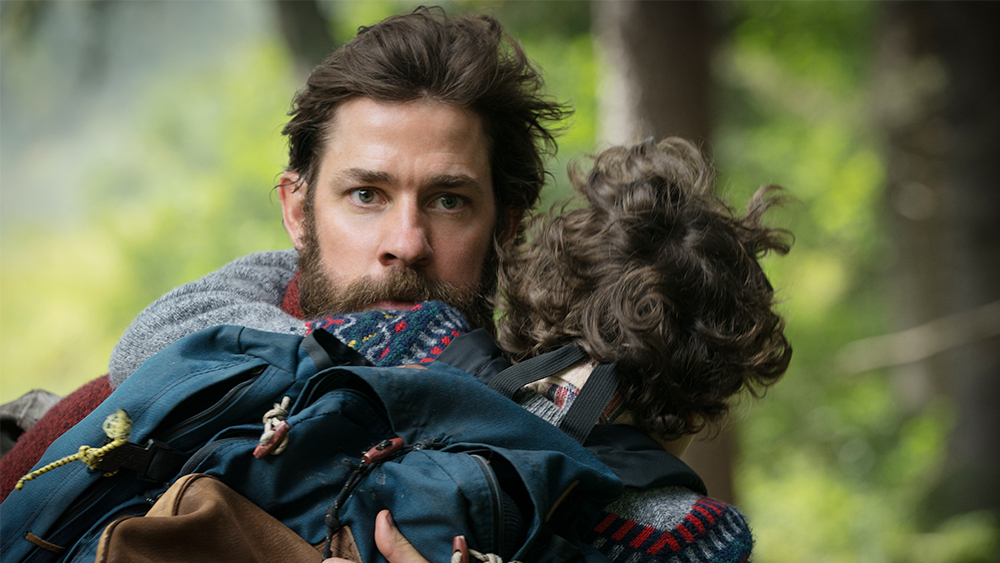 “They’re an evolutionary perfect machine,” Krasinski said in an interview with Empire about the film’s monsters, adding: “The idea is, if they grew up on a planet that had no humans and no light, then they don’t need eyes, they can only hunt by sound. They also develop a way to protect themselves from everything else — that’s why they’re bulletproof.”

The creature design was headed by the film’s production designer, Jeffrey Beecroft, and spfx supervisor Scott Farrar created the end product. Even though for much of A Quiet Place the overall appearance of the creatures is mostly glimpsed in fast-moving blurs, almost subliminally the first time the audience sees them, we eventually do get a clear idea of what these monsters look like (including most horrifically, and in unflinching closeup, the undulating and uber-sensitive ear).

By keeping the audience in suspense as to the creature’s visage, is a ploy not unlike the teasing gloms of the xenomorphs in Ridley Scott’s Alien (1979), and the ratcheting suspenseful buildup to the monster’s reveal is similar in subtle ways, too.

The monsters in A Quiet Place are strange products of evolution under conditions much more extreme than the surface of our Earth. Blind creatures, they have no eyes, and also resemble something primal, prehistoric, and seemingly unstoppable. Though with any creature feature that’s worth its mettle, there’s always a way to bring the baddies down.

“The other idea [with the strange appearance of the creatures],” Krasinski shared with Empire, “was it’s also the reason why they were able to survive […] the explosion of their planet and then survive on these meteorites. Until they open themselves up to be vulnerable, they’re completely invulnerable.”